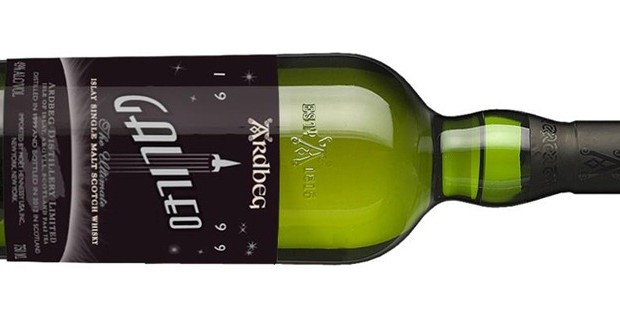 We’ve seen the press releases. We’ve read the news items. This is a release to celebrate Whisky In Space! It sold out quickly, ended up on eBay within a heartbeat, and has either infuriated some whisky collectors or delighted others.

But I’m not going to bother about covering any of that now, since it’s irrelevant: let’s get to the whisky.

Ardbeg Galileo was distilled in 1999 and bottled in 2012. Partly matured in ex-marsala casks from Sicily, and mixed with first-fill ex-bourbon casks, it has been bottled at 49% ABV and comes non chill-filtered. As I say, at the moment you can only get bottles of this on eBay, and you’d be paying upwards of £100 to get one. Question is: should you bother?

Colour: on the darker side of amber, a rich honey. A vibrant orange tone. On the nose: heady yet understated peat; lemon, briny, sweet – but not overwhelmingly so. Charcoal. A musty, malty, seaweedy note, something that reminds me a LOT of the Laphroaig Quarter Cask in many respects. Then turning to ale…

In the mouth: not all that. A basic sweet and savoury. On the latter: bacon, oak, a nutty mushroom weirdness. Cloves and salt. For the sweeter flavours: a kind of blackcurrant, spicy fruit – tropical fruits, in fact. Not particularly sweet – there’s no rich and heady syrup edge going on here. And of course, it all comes wrapped in a bundle of very subtle layer of peat. There’s a medium weight to the whisky, and some almost floral, violet notes on the finish, but it lacks oomph and class.

It’s a big disappointment. There’s plenty going on, though none of it seems to come together in a particularly pleasing way.

It’s just not even in the same ball park as Uigeadail, the Corryvreckan or the 1990 Airigh Nam Beist. It was all right, but nothing more. Some might like it, and I’ve seen the odd positive review online.

I guess that’s the thing with hype – it’s only going to let you down.