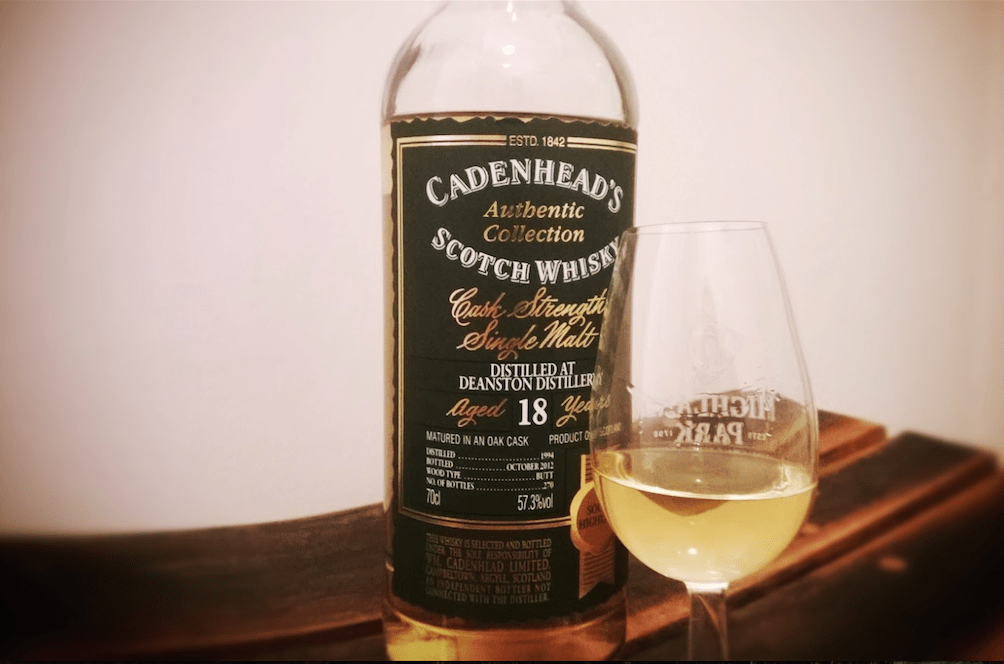 A new week, a new distillery for me. This time it’s Deanston, though the release is from the independent bottler Cadenhead. Deanston is located near Stirling, somewhere between Glasgow and Edinburgh (then up a bit). Founded in 1965, it’s now owned by Burn Stewart Distillers. The majority of its output is used in blends, but now and then a bottle of single malt manages to escape. How often do we hear that? I find a lot of new distilleries because they’re largely about knocking out whisky for blends.

This dram was distilled in 1994 and bottled in October 2012 at 57.3% ABV for release by Cadenhead. Again, I’ve not actually tried anything from this indie bottler, so a double first. You’d be looking to pay around £50 for a bottle of this, though it was limited to 270 bottles – so it could be quite scarce.

Colour: pale straw. On the nose: thick citrus notes. Sea breeze, with flecks of salt tang. Mossy and vegetative. Some kind of mineral quality. Quite a solid zing, too.

In the mouth: Oosh, lovely sweetness, which combines with all the flavours from the nose. There’s something of a Mosel Riesling quality to this – which has those kind of sweet grapefruit and mineral notes really coming to the fore. Then more familiar whisky flavours take over: brown sugar, sultanas, a touch of oak. Just the faintest bitter quality that takes the edge of the finish. This isn’t one of those that sets the world on fire with radical flavours, but what it sets out to do it does remarkably well. What’s interesting about this is that it’s a bit of an old dog at 18 years, yet there’s some life and zest that you find in much younger whiskies.

So there we go. Time to investigate more from Deanston and Cadenhead, methinks…

I always enjoy a visit to the Deanston distillery, not only is the food excellent but the whisky is starting to be appreciated by many..