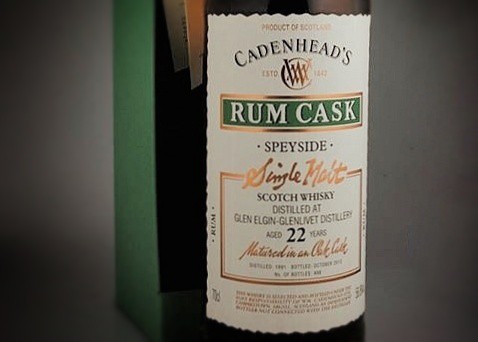 Back to Cadenhead! Recently I tried this indie bottler’s Deanston 18 Year Old, and now it was onto a more unusual of their offerings – a rum cask 22 year old. Glen Elgin distillery was built in 1898, in Speyside. Once it was very popular – knocking out almost 9 million bottles of whisky a year. It was very quickly acquired by the Glen Elgin-Glenlivet Distillery company, and by the latter half of the 20th Century found that most of its output was heading into White Horse blended whisky – with the occasional indie release making it out there to remind folk about that this distillery was still ticking over.

In the mouth: Oof, yes. Thick, juicy, chewy sultanas, raisins, dried apricots. Mincemeat or caramelised onion chutney. Treacle and syrup all the way. Blimey that’s nice! You know, this is almost identical to some single grains I’ve had – and that’s a complement.

This is not going to rock the world, but it’s an extremely solid dram. Sometimes I’m amazed at just what these blend providers can produce. This, for me, is one of the things that makes whisky really interesting – in a world of marketing razzmatazz and booming mass market blends, it’s these little hidden secrets, the quiet, soldiering distilleries that offer some very interesting bottlings. On the other hand, it makes you realise just how many more whiskies are out there to be tried…