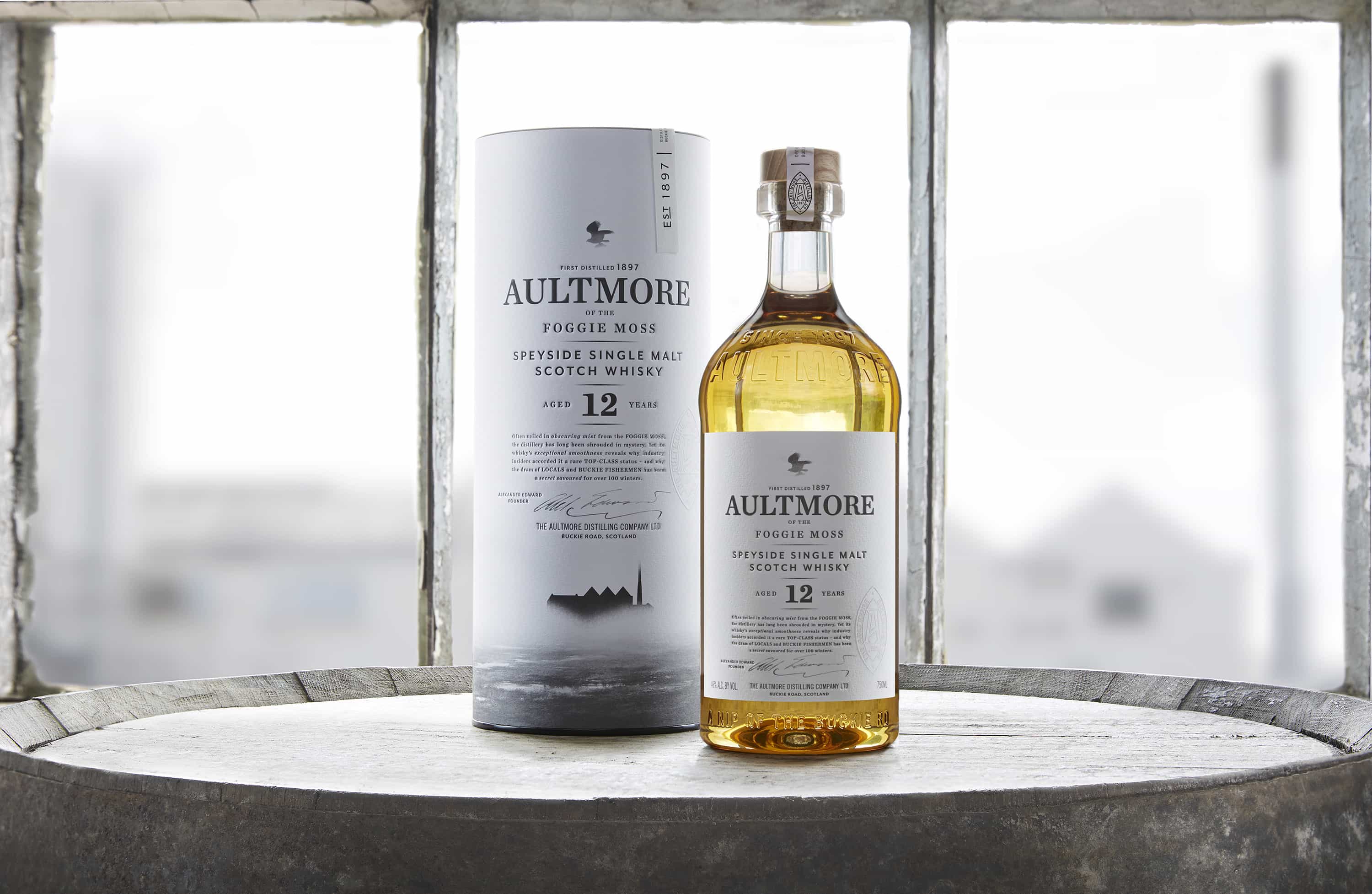 Aultmore is coming. (Update: it’s here.) Which is to say, the first distillery bottlings of Aultmore are on the way, as part of John Dewar & Sons new ‘Last Great Malts’ range – that’s the forthcoming Aultmore 12 Year Old is pictured above (if you’re reading by email, come over here). Look at that sexy packaging! Now I’ve recently discovered and have been delighted by Aultmore’s whiskies – some might say obsessed, but so be it. I figured I’d do a round-up of five independent bottlings, just to test the breadth of the distillery’s capabilities – all in the name of science, you understand. I’ll be clear: they’re all pretty damned good whiskies, which is impressive in its own right.

But before that, a little information about this little-known distillery. Aultmore is located in Keith, Banffshire, right in the centre of Speyside – and it gets its water from the peat-imbued springs of the Foggie Moss. The distillery was constructed in 1895 by Alexander Edward, who already owned the Benrinnes distillery, which he inherited it from his father the lucky sod. He then sold it to John Dewar & Sons in 1923, whereupon output and still numbers increased. Aultmore was then sold to United Distillers, in its year of formation – 1987 – and was then later sold to Bacardi due to trade directives (Schobert, Whisky Treasury).

Aultmore is considered “top dressing” by blenders. That basically means it’s the mutt’s nuts when it comes to adding to and enriching blends. But there have been a handful of its single malt offerings over the years, such as the Flora and Fauna range and the much-lauded Rare Malts series. In 2004 there was a distillery bottling of a 12 Year Old, but apart from that it has been the domain of independent bottlers. That was, until John Dewar & Sons announced that they were finally dusting off the old casks and finally releasing its offerings.

With that in mind, here’s a few of the independent bottlings that are out there already. 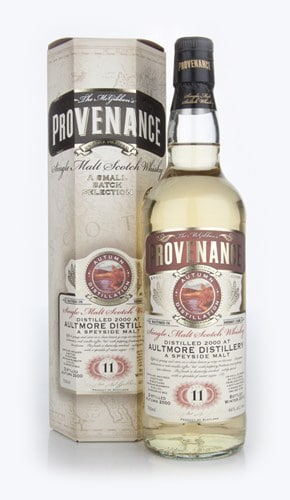 In the mouth: now that’s a lovely sweetness. Really ever so delicate. Not so much the classic dried fruits of Speyside, but something altogether more softer. Very much a dessert form of fruit, rather than anything in its raw state. A little strawberry jam perhaps. Almonds (with skins on). Again, a delightful biscuity note, custard creams even. If a little two-dimensional, then the two dimensions are done splendidly well.

Colour: straw to pale gold. On the nose: a touch flatter than the others. It’s not as forthcoming by a long way. Sharp sweet fruits: raisins and sultanas. Floral notes. Citrus. Seems stronger than it is.

In the mouth: sharp apples, no sweet delights at first. Marzipan. Takes a while for that cool mint to come through, but there it is. Green tea. Again a little more nuttiness – almonds, cashews. Wood tannins, a little spicy heat towards the end. A middling finish. The most disappointing of the bunch, but it’s still a solid whisky. 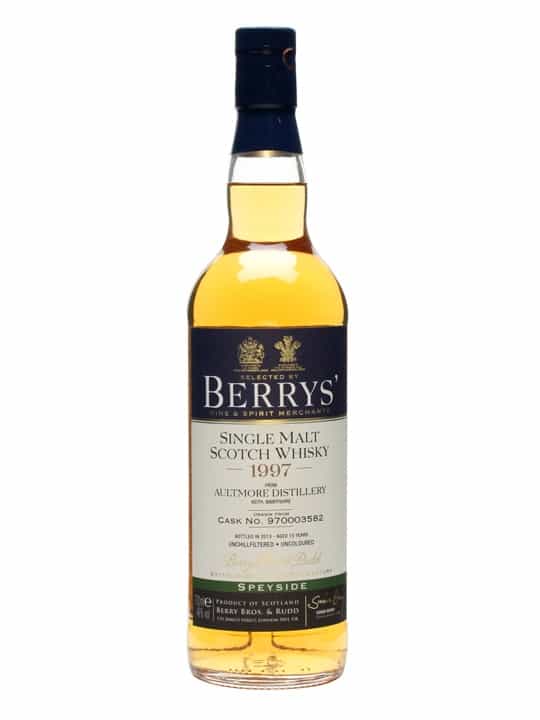 Colour: amber. On the nose: much more unusual! That’s a nice sweetness, but with an almost sandalwood undertone. Olive oil. Dry white sherry.

Colour: amber. On the nose: treacle sponge. Plum jam. Lots of rich late summer fruits, raspberries, apples, blackberries all simmering away in a pan. Just a touch of a musty quality, though not a bad one.

In the mouth: Big and bold. Stacks of flavour. All of the nose comes through wrapped in a woody and spicy parcel of delights. Not outrageously complex, just very good fun. Really warming, enduring peppery finish. 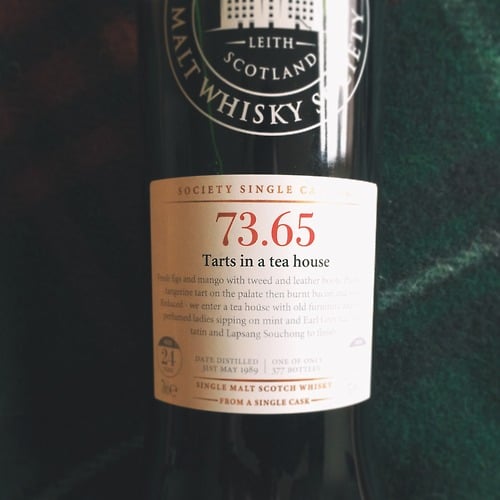 Colour: polished mahogany. On the nose: very accommodating, given the strength. An absolute bomb of dried fruits and sherry. And that very faint note of sandalwood that you might normally get with Japanese casks. Raspberry jam, still warm in the pan. Almost a waft of smoke, but not quite.

In the mouth: and this is why we drink whisky. Staggeringly intense dried fruits with a luscious mustiness and woody undertone. Everything from the nose comes crashing through. Then that peppery wood opens up into black tea and treacle. Go on. Fortune favours the bold. There’s a lovely combination of viscosity and dryness. Charred notes. Vanilla. Toffee. Something almost like an old bourbon about the middle-to-end notes. Wonderful!

This distillery’s whisky is good. Very good. Consistently good, which is more important I suspect. And many moons ago I tried and enjoyed another of their indie releases, that one from That Boutique-y Whisky Company, which was also very good. You get the picture.

So it’s understandable why Aultmore single malt is coveted by blenders, and you can see why John Dewar & Sons have decided to wheel it out. Consider me absolutely at the front of the queue to buy these official distillery releases.

Yes, that’s right I don’t have any photographs of Aultmore distillery. It may come as a surprise to you that there are still distilleries out..