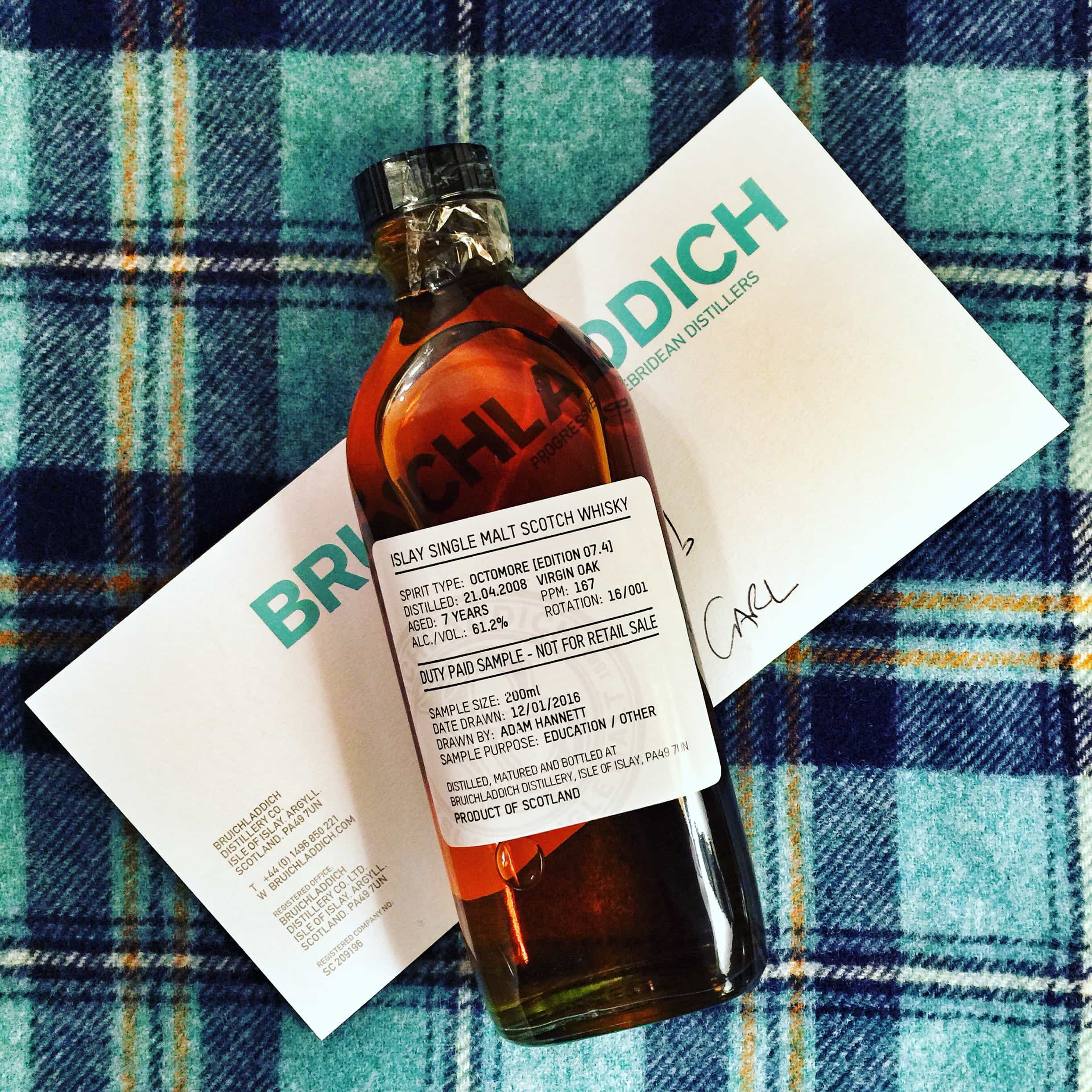 Can you keep a secret? Well you’re better than me, because I can’t. Not normally anyway. But I was pretty good at keeping this a secret. More or less.

Two and a half years ago I travelled to Islay on honeymoon, and stopped by to visit Bruichladdich distillery. Whilst I was there, as a honeymoon gift, Carl Reavey – who showed us around the distillery and up to Octomore Farm – asked Adam Hannett to get me something outrageous from the warehouse. He came back with a bottle of single cask Octomore (which is the world’s most heavily peated whisky) that had been matured in virgin oak (which is one of the most powerful cask types in which to mature whisky).

Normally Scotch whisky goes into casks that have previously matured something else, such as bourbon or sherry, because virgin (new) wood is thought to overpower the whisky. Ex-bourbon or ex-sherry casks will have taken the heat out of the wood, as well as given a little of themselves to it. Certainly, in theory, something to keep in mind when maturing for ten years and beyond. So what would happen when you put a staggeringly peated whisky, such as Octomore, into virgin oak casks? It’s a mad combination. Octomore is sometimes a lot to handle even for fans of peated whisky. Sadly, I couldn’t tell anyone at the time, though I knew the answer.

I recalled speaking to Carl, as we drove up from Octomore farm itself having just tasted the spring water there; he didn’t think at the time they’d ever release anything quite like that. Of course, Octomore has become serious business for the distillery, and I always wondered if they’d ever finally do it. 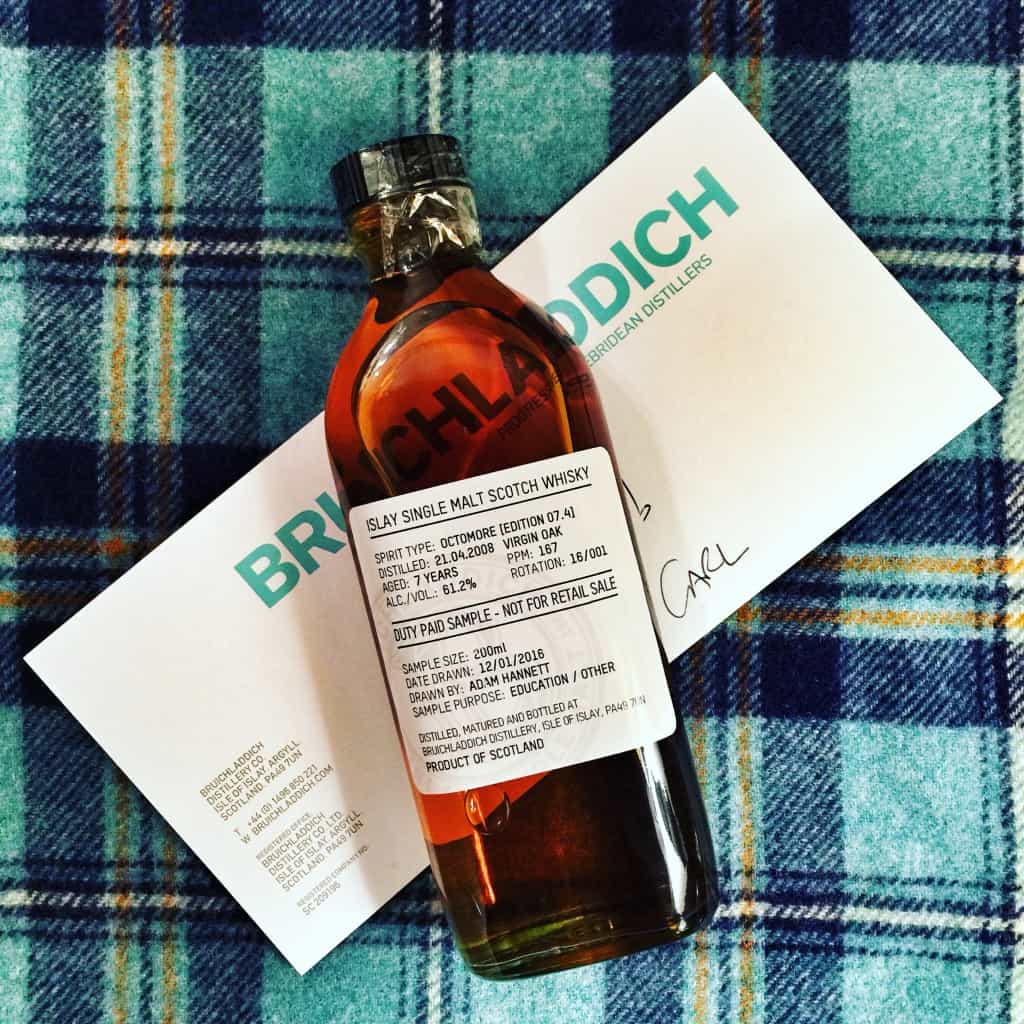 Well, they have, and now it’s here as Octomore 07.4 Virgin Oak, which will cost £150 a bottle and clocks in at 61.2% ABV. And I can actually compare Octomore 07.4 – which is a vatting of different Octomores that have been either maturing in virgin oak all their lives, or for a portion of their lives after living in first-fill ex-bourbon casks – against my raw, single virgin cask Octomore, which is priceless in my eyes, due to its personal nature, and bottled at 65.7% ABV. 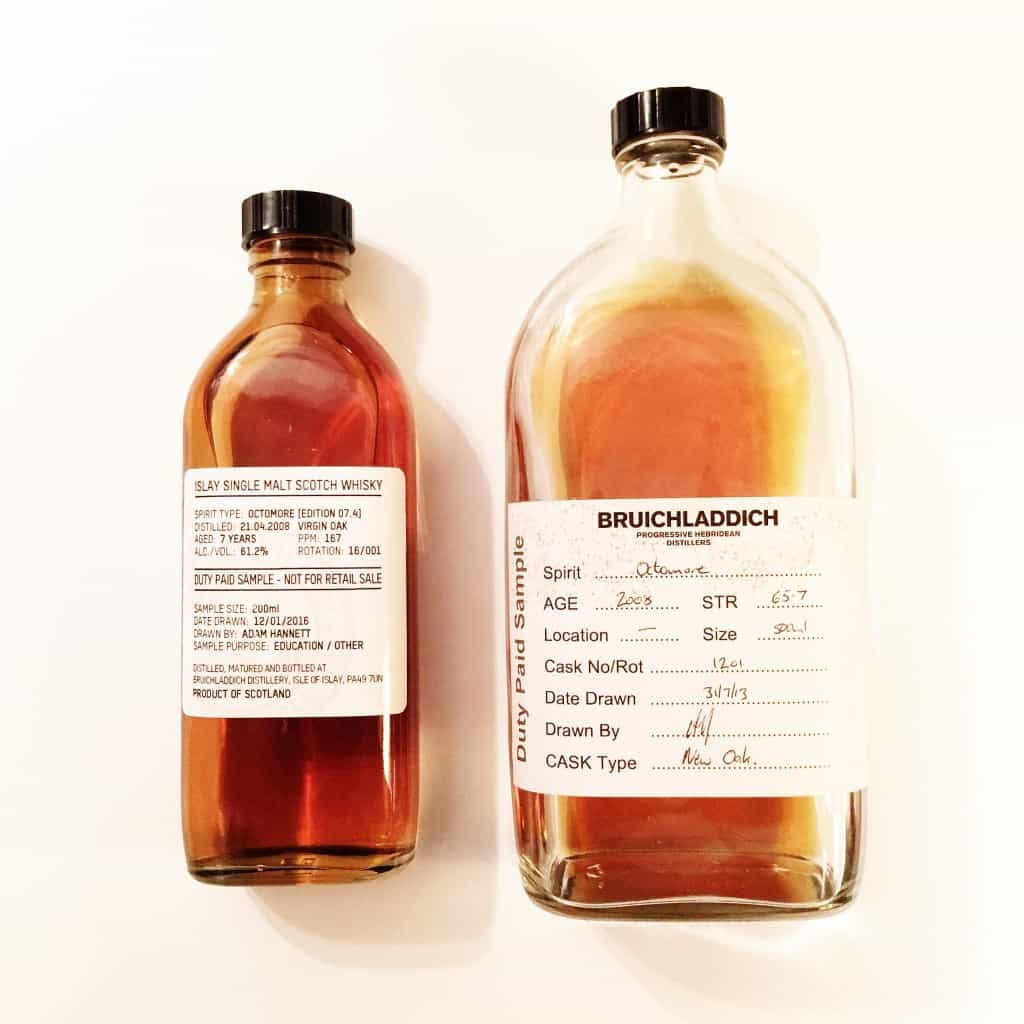 On the nose: coal smoke and simmering jam. And really rather mellow. Caramelised sugar – no, caramelised onion. Well-cooked bacon. Syrup. BBQ sauce. Spare ribs, covered in Chinese five spice. I can see this being compared to Balcones Brimstone, in many respects, but this is more complex. Cigar boxes and sandalwood incense sticks.

In the mouth: an assault of the senses. Much of those aromas come through, heavily, and it’s also slightly tannic. Definitely BBQ-ed meats – leaning towards Indian food in fact. Cumin, or perhaps garam masala. Charred meats: well-done sausages that have dropped into the ashes. And all encased within sweetness: plums or something more sharp such as damsons. Heather honey. Redcurrants. Ketchup? When I do get to the smoke, it’s more smouldering, earthy and agricultural – a common theme with Octomores.

On the nose: instantly more ketchup-like, or HP Sauce. Redcurrants. It’s sharper, it’s fresher – a little edgier than the vatted malt. Weirdly, less wood notes, but clearly more affected by the wood: which is to say, deep aromas, elderberries, or even old-fashioned pontack sauce. (Water, personally, doesn’t suit Octomores, as I find it unbalances the whisky.) And curiously, when I go back to the vatted malt my nose is more attuned to the tartness, the redcurrants, the voluptuous red wine notes; but I didn’t find them so obviously beforehand – this prickly tartness is one of the features of the single cask variant.

In the mouth: insane, quite frankly, as if you’d exploded a can of Cherry Coke inside a woodburner and then licked the contents in the morning. It’s far harder to pick the nuances out, because it’s one of the most intense whisky experiences I’ve ever known. Less of the curry spices here, and more of the piri piri. Paprika. Basil. Citrus, somehow, manages to show itself among all of this. You could spend a long time picking this apart and struggle to do so, given the intensity. It’s way off the charts of the whisky flavour wheel.

There are clearly more layers to the vatted version, Octomore 07.4. It is more complex – and mellow in comparison. Neither of these whiskies are for typical whisky drinkers: if you like this sort of thing, as I do, you clearly have a particular penchant for whisky experiments. For boldness and creativity. For something you’d never get elsewhere. Extreme whisky, even, and in this case a Scotch that is most un-Scotch-like.

So why do I prefer the single cask version over Octomore 07.4?

Not because it’s a gift – though yes, because it’s a gift – but because the Octomore series is like going so far down such a dark, peated path that there’s no turning back from the extremes. I’m fully committed to it. So why have the more nuanced, more complex and skilfully vatted version of this whisky when – like a messed-up crack addict – I’m drooling after its purest form? 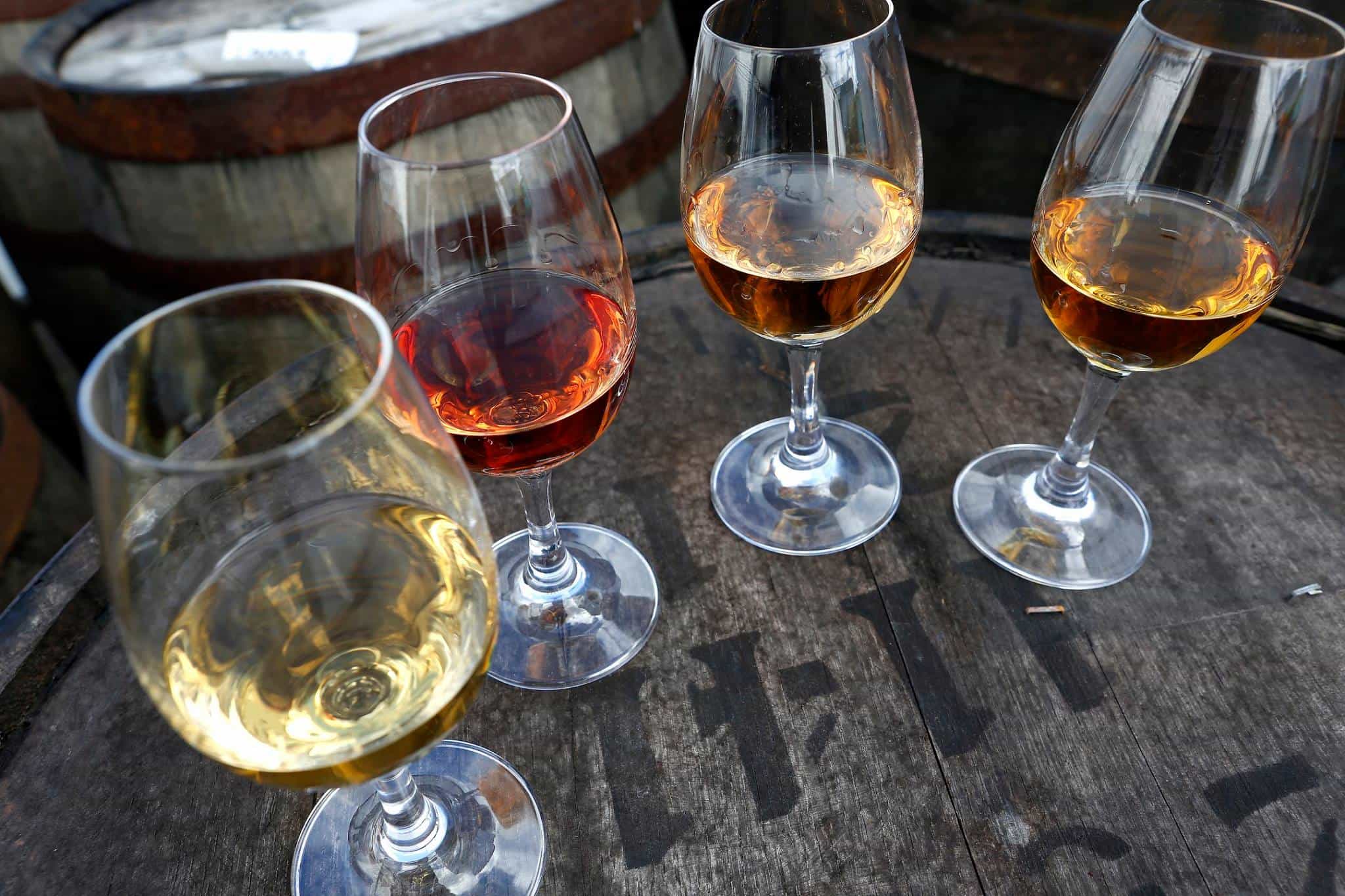