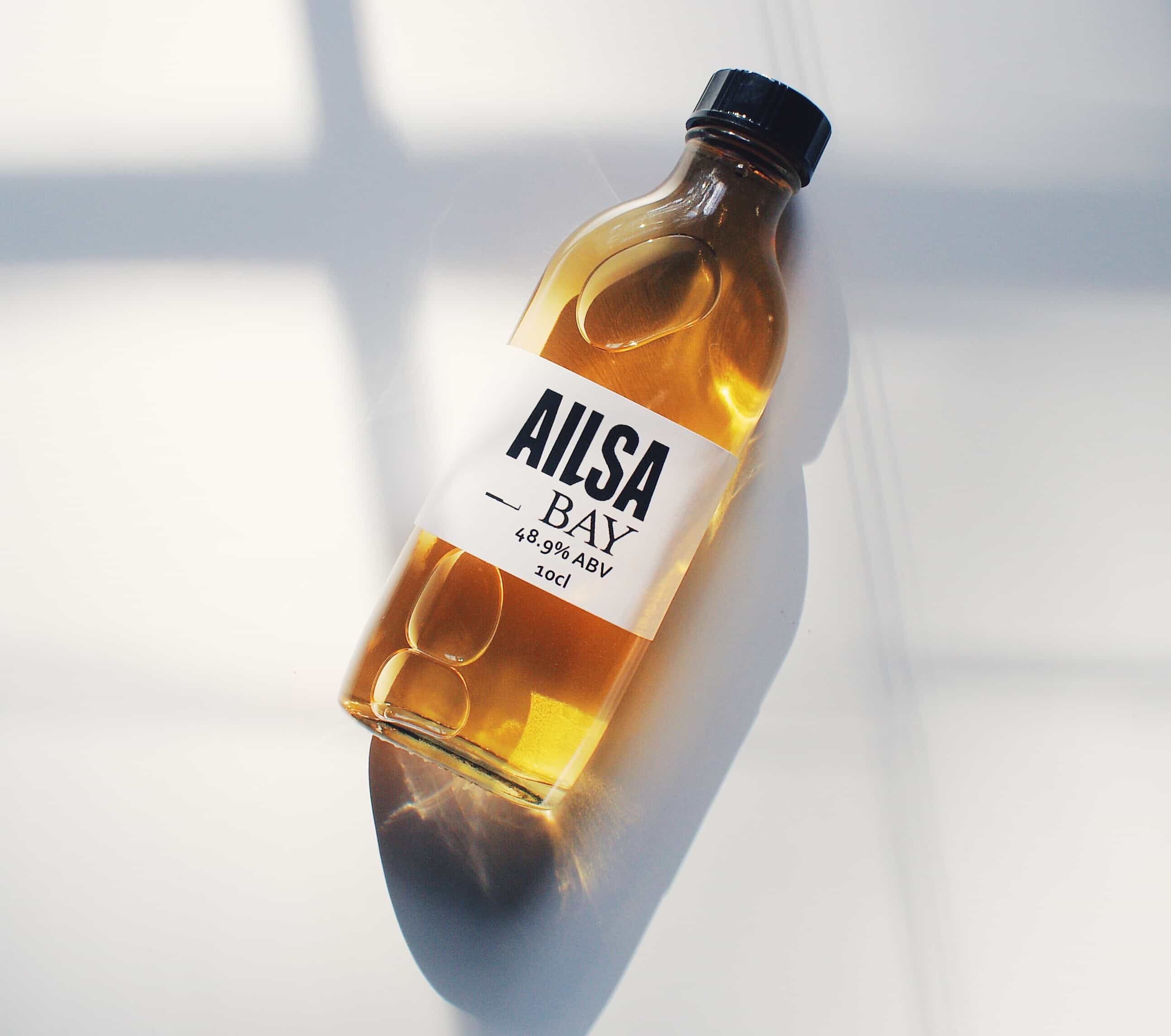 Remember a little while ago when I looked at Mosstowie – which was in fact a set of stills that sat within another distillery at Miltonduff? Well the same sort of thing goes on today, in a manner of speaking. That’s what’s happening with Ailsa Bay.

Ailsa Bay sounds a little bit like one of the locations for Home and Away, but it couldn’t be further from that setting. Instead of the bejeweled waters of somewhere warm, the Ailsa Bay distillery sits inside the industrial behemoth of the Girvan grain distillery, whose designer presumably once looked at an oil refinery and thought: this is precisely what the whisky industry needs. Indeed, Ailsa Bay is a distillery within a distillery. The location is in South Ayrshire, near the Scottish west coast, and the new distillery is named after the Ailsa Craig rock, which sits in the Firth of Clyde 10 miles away.

It wouldn’t be the first time that malt whisky stills have been positioned inside a grain distillery. Others include Inverleven at Dumbarton between 1959-1991 and Ben Wyvis at Invergordon between 1965-1977. Interestingly, Girvan itself also previously held malt stills – released as Ladyburn – between 1966 to 1976. So Ailsa Bay is its second internal distillery.

There’s some interesting stuff going on within the distillery, and the press material around it makes interesting reading. The facility was created by William Grant & Sons in 2007 with “unique advanced technologies and precise controls” so that Master Blender Brian Kinsman could “isolate and control more elements from the initial distillation”. Sadly we don’t get to know what advanced technologies exactly, but then again you can’t blame them for not sharing.

Regarding the characteristics of the whisky produced at Ailsa Bay, William Grant & Sons wanted to create a new style of peated whisky. According to Peter Gordon, Director of William Grant & Sons, they wanted to create a “very heavily peated whisky with all of the sweetness and smokiness we could muster, but also dial down on some of the medicinal notes that characterise some peated whiskies.” The Master Blender Brian Kinsman has been able to “carefully control the outcome of the whisky… I took exceptional peated malt and ex Baby Bourbon Hudson casks to create a whisky with a balance of smoke and sweetness, to occupy a new space on the flavour map.” Those are bold words.

Just how smokey are we talking? Well the finished whisky (not the malted barley, as is the norm for measuring peat levels) has a phenol content of 21 PPM (parts per million). So pretty peated. And now going back to the part about the sweet peat and new parts of the flavour map, Ailsa Bay will also have a SPPM reading – sweet parts per million. In this case, the whisky has 11 SPPM. No, I don’t know what that really means either, but I guess when you line up the range over time and compare them it will become more apparent. Both of these figures can be seen on the bottle shot below, which I rather like. 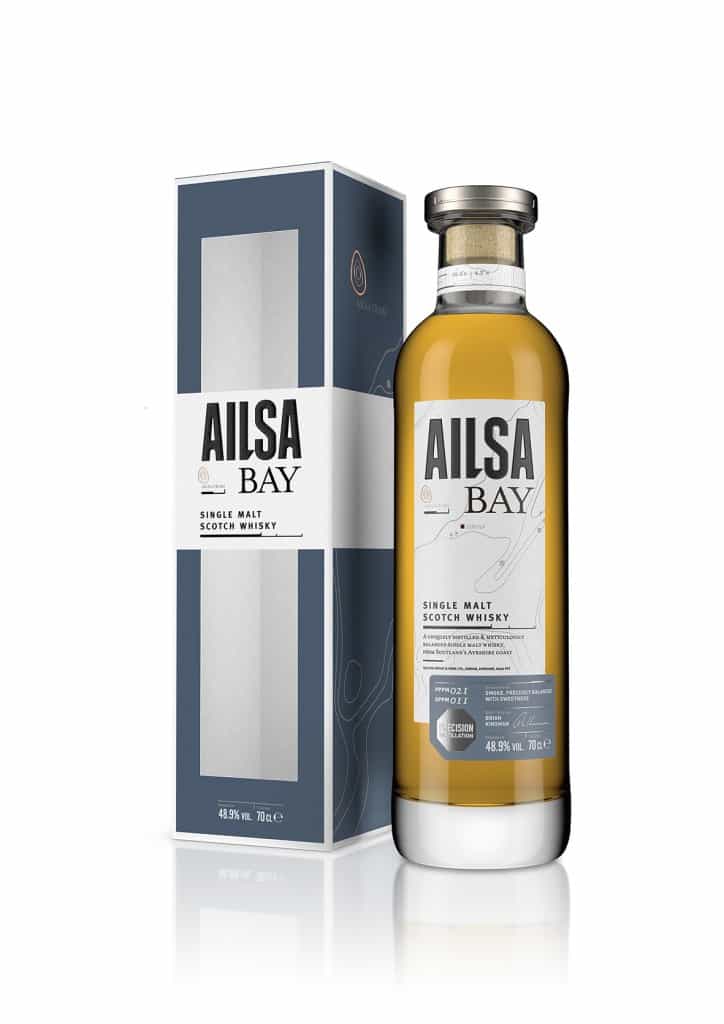 Ailsa Bay single malt whisky is the first release from the distillery. It’s bottled at 48.9% ABV and costs approximately £55 a bottle.

On the nose: okay, I’ll give them that. This is a little different to many, perhaps most, peated whiskies I’ve tried. Yes there’s that classic sweet note, but it doesn’t come with the usual earthy or ashy qualities. Nor is it briny or coastal. There’s a gorgeous butter-toffee undercurrent, and I’m reminded of waffles with a drizzle of golden syrup. Not especially malty. Touches of white tea. A little grassiness, but not much. Quite nutty: ground almonds. Heather honey.

In the mouth: again an extremely unusual texture here. Medium-weight to heavy, but dry, not oily. Flashes of Lapsang souchong tea. Pears drizzled in syrup. Vanilla, but not much. Mossy and vegetative – but not earthy. Ginger. Sour cream. The peat and the peppery quality of the wood mingle very nicely, and are inseparable really. It’s not a dirty peated whisky – it’s rather clean. Just a whiff of citrus on what is a slightly ashy finish, but that finish is the first time it’s gone into more traditional peated territory.

The boffins at Ailsa Bay may be onto something here. You know what this has? Character. A new whisky that’s something quite bold and different. It is a little rough around the edges, but I’ll take that any day over the production line of vanilla McWhiskies being churned out.

Tasting a peated Lowlander, light in body and very unusual, puts me in mind of Rosebank. Now, I’m not going to make stupid comparisons with a legendary closed distillery, particularly as I don’t believe I’ve tasted very young Rosebank. But you get my point: Ailsa Bay has a bit of attitude, and at £55 you should grab a bottle.

From a distance this was the closest an enthusiast could be to Kininvie distillery and its whisky. However times change and many visitors have been able to..