I’ve recently returned to the pleasures of whisky after too long away from it. Now I look back and try to comprehend why I actually wasted my time with beers and the fizzy stuff that my generation seem content to drink in vast amounts. Whisky certainly in Scotland suffers from an image problem, one that isn’t as terrible as Buckfast for instance but one that the industry needs to address. It always amazes me that many cohorts are content to drink Jack Daniels but won’t be seen dead with a wee dram. That’s the power of marketing and the image on both sides, an unfortunate situation if you have the ability to taste (which we all do) and distinguish flavours. Yet whisky is still snookered with this image of old gents or Highlanders enjoying what is a strong drink that to many tastes like rocket fuel or paint stripper.

As a kid I had the pleasure of visiting many distilleries here in Scotland and Ireland. I can still recall the aromas and sounds of those visits despite being too young to appreciate the flavours, each event left a lasting impression. This year I do plan on visiting a few distilleries and may take the opportunity to pick up something special. I did this for my best man several years ago and I’m pleased to hear he has yet to open the special edition Glenmorangie I gave him, which was boxed and numbered from an edition of around 513. That was £125 at the time, goodness knows what price it is now or how wonderful it would taste. The father-in-law received a bottle the couple-to-be poured from a cask, adorned with a label we completed and in a traditional bottle complete with sack cloth. The blend isn’t as refined and is of a much higher strength but remains set aside for a special occasion. One I’m sure will need doused with some water before sampling.

Where they live in Sutherland is a wonderful location for several distilleries with Glenmorangie being close by and the much smaller Balblair in Edderton. Over Christmas a treat for us was the opening of a bottle of Balblair, a label I had yet to sample but was immediately impressed by the smooth taste and sweetness. As such the label does not enjoy high profile distribution and will require a trip to a specialist to purchase my own, and visits to the distillery are by appointment only. I plan on correcting this gapping flaw in my home selection as soon as possible.

Cost is often highlighted by friends who do not drink whisky, often prompting them to pick up a cheap bottle of blended Scotch that is often of unknown imported origin and rarely surprises with its contents. I’m always surprised by this argument as many will pick up a box or six-pack of beer that will range in cost from £6-£13 and will last a weekend at best. Whisky bottles at home tend to last far longer and provide much greater pleasures. The supermarkets did have and still do (in the run up to Burns night) some excellent deals on bottles of single malts for around £25. Tesco’s are currently offering a Highland Park 12 year malt for around £22, an excellent price for an excellent malt I picked up a Japanese malt recently and was highly impressed, so it is worthwhile to take the risk and try something new! 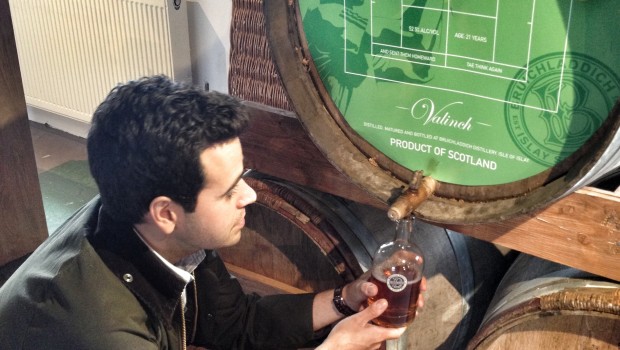