As many whisky enthusiasts will know, particularly in the UK. Today was the release of a very special malt throughout the Aldi UK stores. Somehow the German supermarket chain had gotten ahold of a few casks of 40 year old malt and bottled these under the invisible ‘Glenbridge’ badge. A one off limited run of 3000 bottles, which equates to about 6 bottles per store. Needless to say demand was huge and it will have sold out instantly. 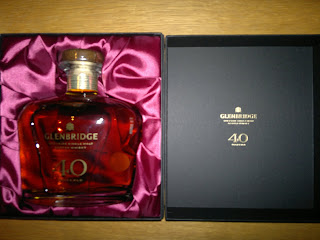 These were limited to 1 per customer and no staff were allowed to purchase the whisky. Unlike the recent 24yr release Aldi did a fortnight ago, this 40yr has been generally well received and much speculation online as to which distillery is responsible. I was fortunate enough to be staying near a branch and having arrived at 0730 secured the third bottle from the store. It was good to speak with the others who managed to purchase this release and they all seemed to be doing it for the right reasons – rather than those money grabbers who have now put up their bottles on eBay for circa £300. Aldi to its credit actually had letters of apology for those who didn’t managed to acquire a bottle, which included a £5 off money voucher for their next shop this week. 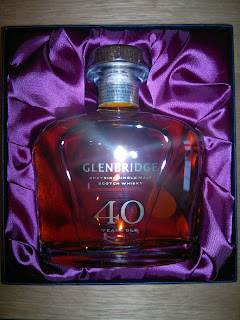 ‘This single Highland Malt comes from one of Scotland’s Premier Distilleries. Glenbridge has been matured in European Oak Sherry casks resulting in a very intense & rich flavour

I’ve been watching some of the eBay auctions this week for the Glenbridge.  For an edition of 3000 bottles an alarming rate have been turning..