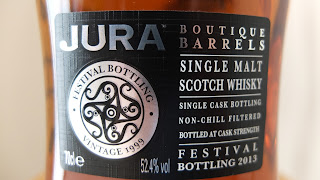 With the passing of May, another year of scrambling for those whisky festival releases has come to an end. With its proximity to Islay, Jura was never going to sit on the sidelines and observe, instead choosing to put together a whisky festival of their own and a 2013 release to mark the occasion.

Now Jura is a distillery that divides opinion. It features very highly in magazines and the top seller lists with retail chains such as the Whisky Shop. My own experiences with this malt are mixed to say the best. The staple dram is I find terribly bland and lacking character, however it is clearly popular with many out there including some relatives. Mind you, this particular bottle has been generally well received so far. 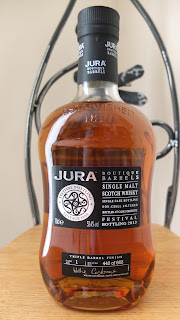 For the 2013 release 663 bottles were filled, with 600 being released to the general public and individually numbered. I presume the remainder went to employees making a nice round number, which is healthy enough. Jura allocated 400 of this number to visitors to the distillery over the couple days in May when their festival took place. The remaining 200 were put aside for online orders at a specific time. Needless to say, very much like Kilchoman earlier this year, the website went into meltdown at the allotted time and was not revived. Yes, these experiences are frustrating, especially when you are in the office at home, desperately pressing the refresh button.

However credit where it is due, as Jura around this release period sought to reply to any email queries regarding the 2013 bottle. For instance price was always going to be a consideration along with availability. After the online issues I received an email with further details and was advised to expect the online shop to be revived the following week. Then, out of the blue, another email with a URL giving me 24 hours to purchase 1 bottle before the remainder were made available. This is great service, especially as I would believe many emailed the distillery about the release and were rewarded with this opportunity. So, despite the technical issues, Jura showed some foresight and by limiting the release to 1 per person prevented the issues we’ve seen with the Laphroaig Cairdeas 2013 release. Needless to say, it has since sold out. 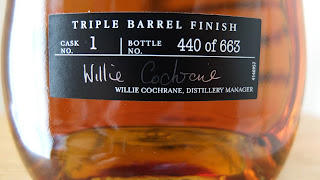