This is the second part of my write-up about the premier Highland Park tour known as the Magnus Eunson tour. You can read about the actual tour itself right here. This instalment is primarily about the tasting that rounds off an enjoyable visit to Orkney and Highland Park. As I said previously this tasting is epic and pays for the cost of the tour easily.

I’ve never had the opportunity before to sit down with the entire core range of a distillery and work your way up through the ages. The only age missing from our healthy selection of drams; poured in a generous fashion it must be said, was the 50-year-old. At £10,000 a bottle I think we can all forgive that omission. Interestingly our experienced senior guide had tasted the ultimate dram and put it behind the 25 and 30-year-olds respectively. Proof that sometimes age isn’t the ultimate barometer of quality. So, let me retrace the hardship of forcing myself to go through these drams. 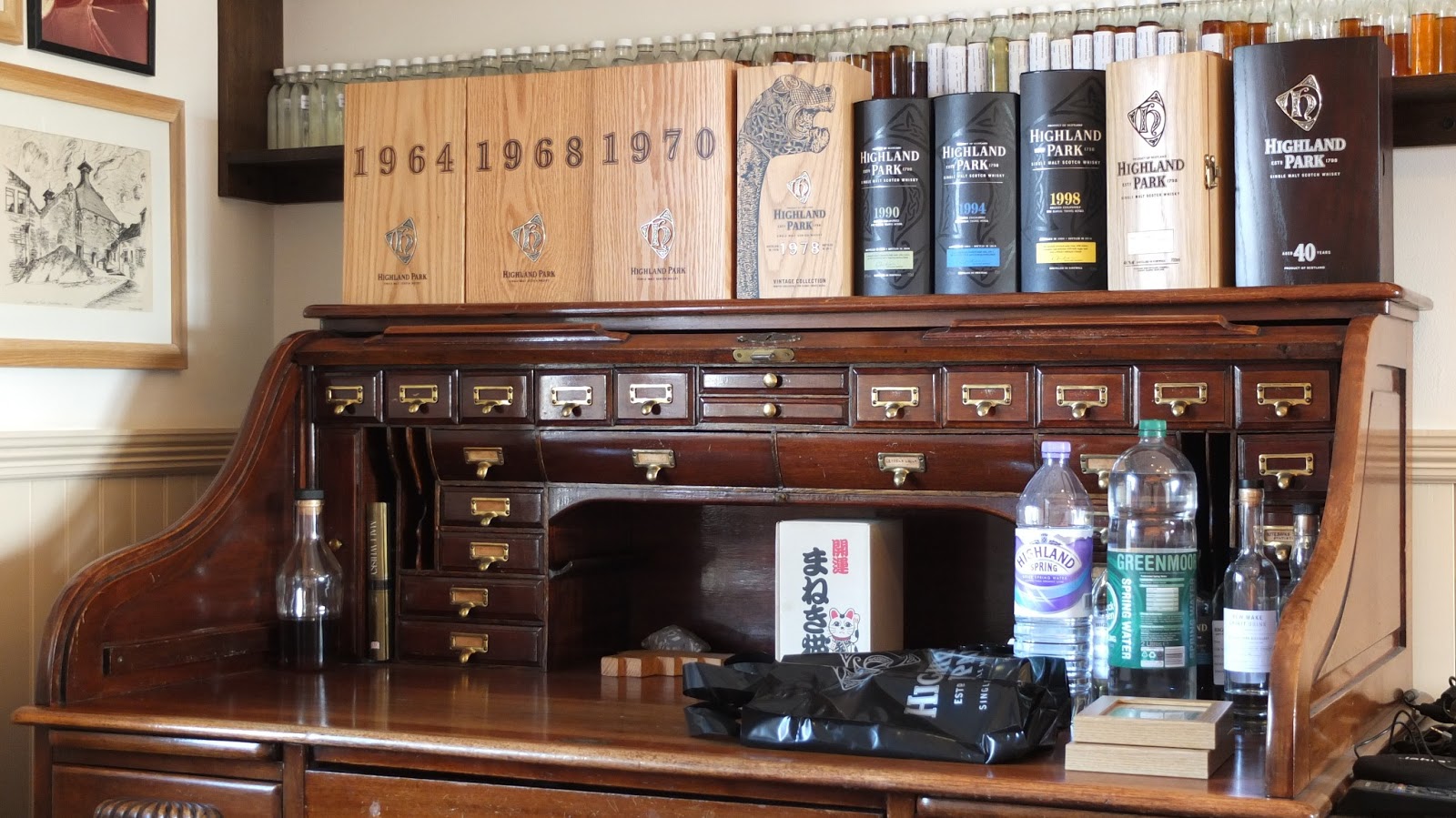 The Tasting Room is a wonderful place to sit back and enjoy whisky. Adorned with countless awards on every wall and ceiling. It also plays home to as many Highland Park bottles as you are likely to see. The tasting took, well I think around an hour to complete, and we were never rushed or prompted. Instead, our guide gave us a huge insight into each of the drams and the Highland Park emphasis on the subtle battle of bourbon versus sherry cask. A word of warning however as being a fan of the 12 and the 18-year editions – you’ll never look at or taste these bottlings in the same way again. 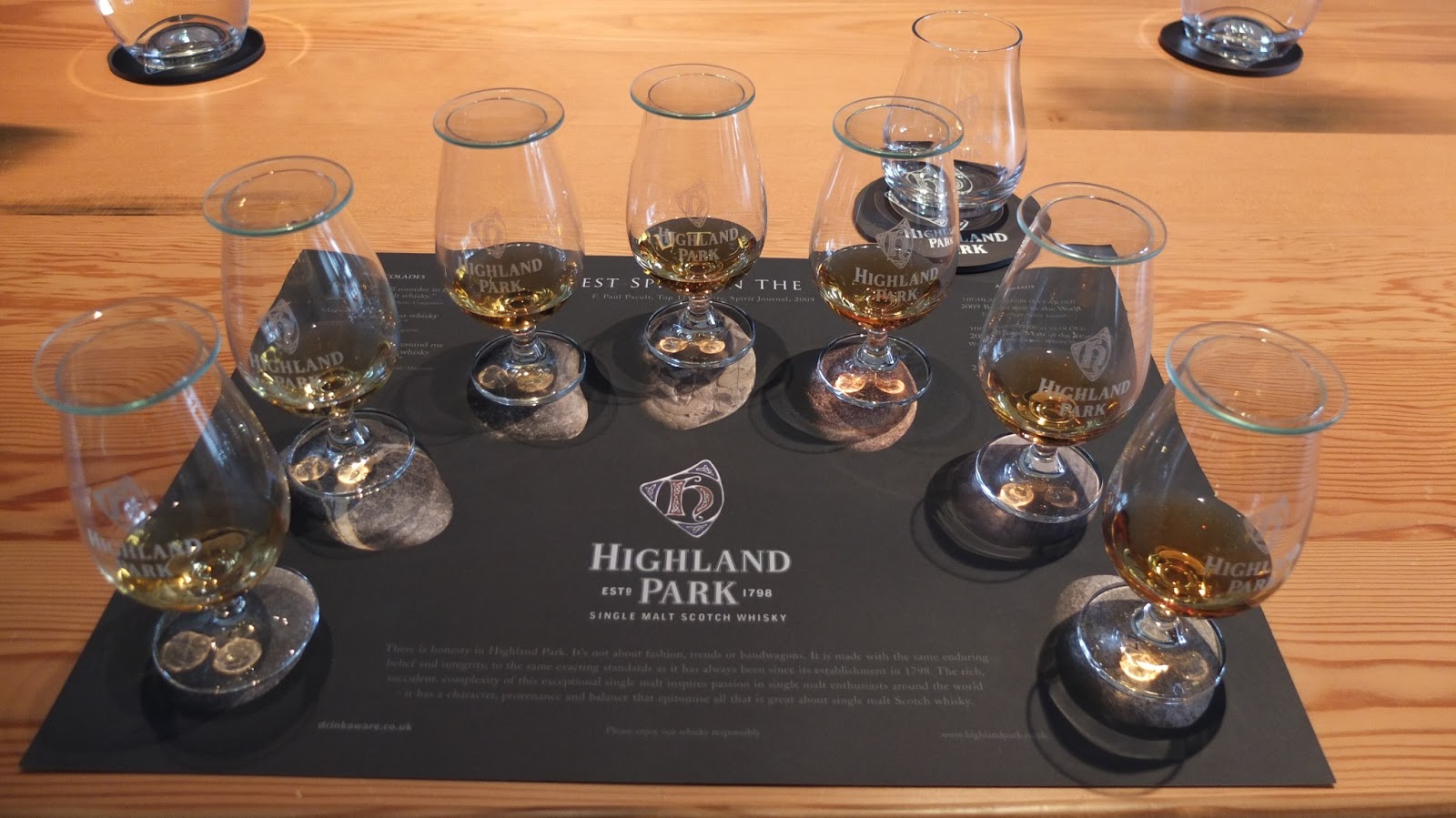 As you stride through the years towards the 40-year-old you’ll look back on that 12 year which previously you viewed as a strong staple malt as a wet flannel across the face! Our guide underlined this after the 25 year by asking all of us to go back to the 12 year and smell the empty glass = amazing. Although only 2 of us had paid for the full tour, our partners (who paid for the basic tour) were involved in the tasting. While they only had a 12 year themselves, as a group we all offered our suggestions on the aromas from nosing. This underlined the rumour that women do have a better sense of smell. 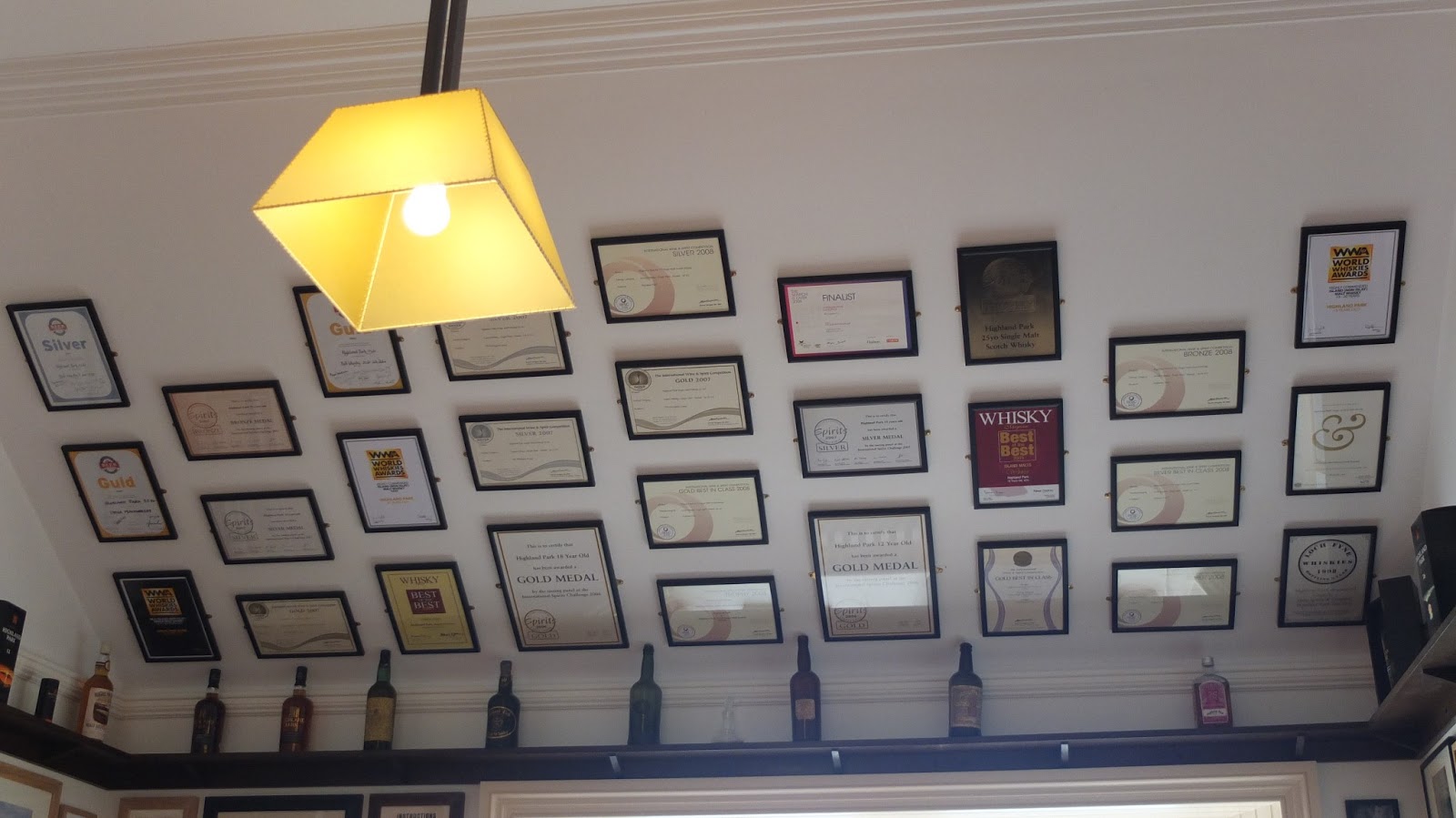 We started with the 12-year-old; a common sight in retailers and pubs across the world. It is a reliable malt, lacking the finesse and depth of its older 18 brother, but perfectly drinkable. The 18 year is a strong all-rounder and remains extremely popular. In-between these was the feisty 15 teenager which is the oddity in the Highland Park range. The balance of bourbon versus sherry has been tipped in favour of the bourbon resulting in a lighter and refreshing malt. Retrospectively it was a malt that didn’t feel like it was from Highland Park. This was the one dram that I dismissed during the tasting, but now I would like to spend more time with a bottle before coming up with a final verdict. 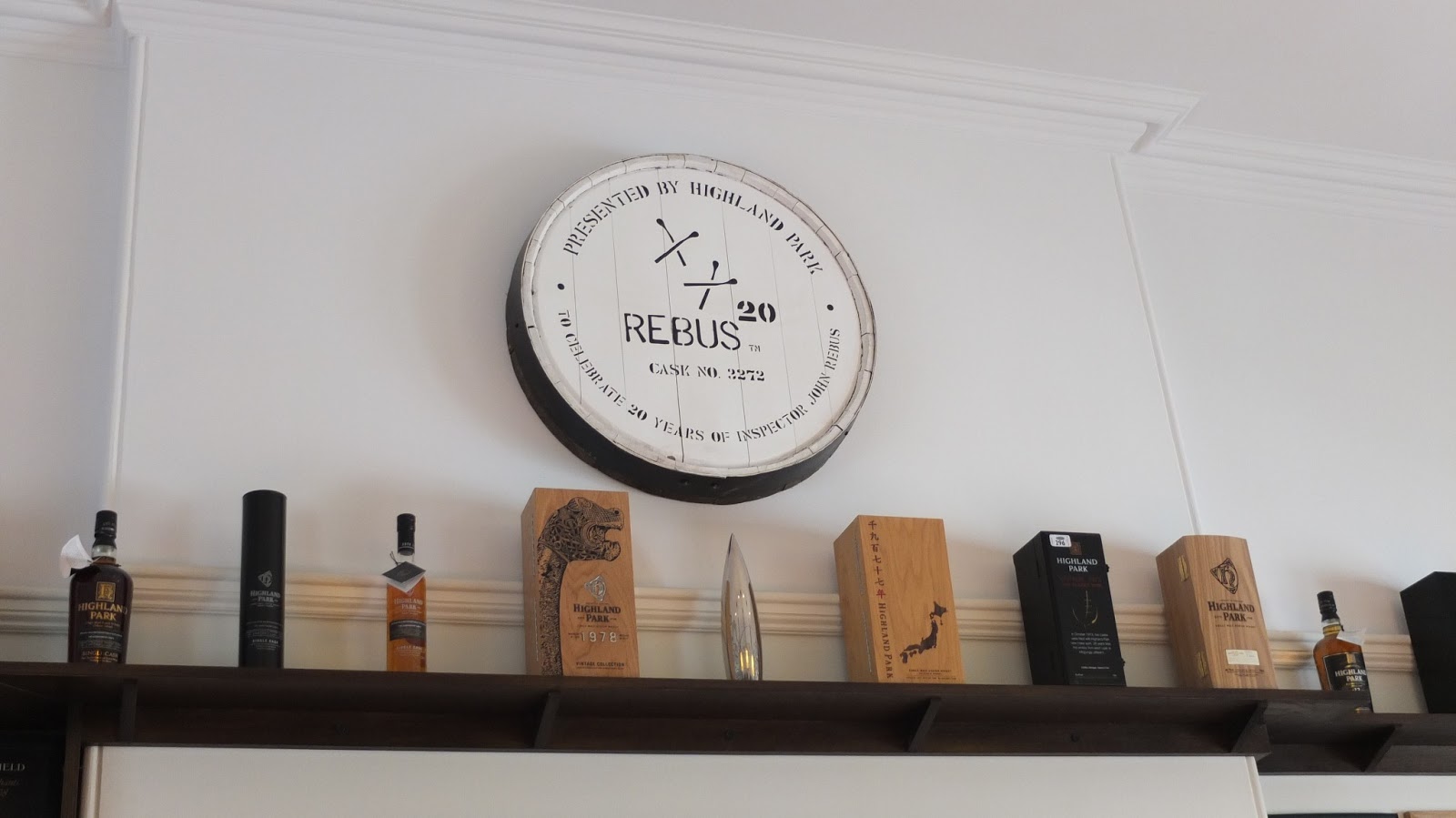 The 18 year may represent the tipping point for many looking to buy a bottle of Highland Park. Beyond this we were into new uncharted, expensive territory. The 21-year-old proved immensely popular when it was first released several years ago mainly due to its complexity and added punch of older whiskies in the vatting. This debut was 47.5% in strength and promptly sold out. No surprise then that the distillery put together a second vatting, but at a much lower strength which received general criticism. So finally in 2012 it returned to 47.5% and this is the version to purchase if you are thinking of owning the 21 year. This trend continues with the 25-year-old with both versions enhanced by older whiskies within the bottle. Now for the summit ascent. 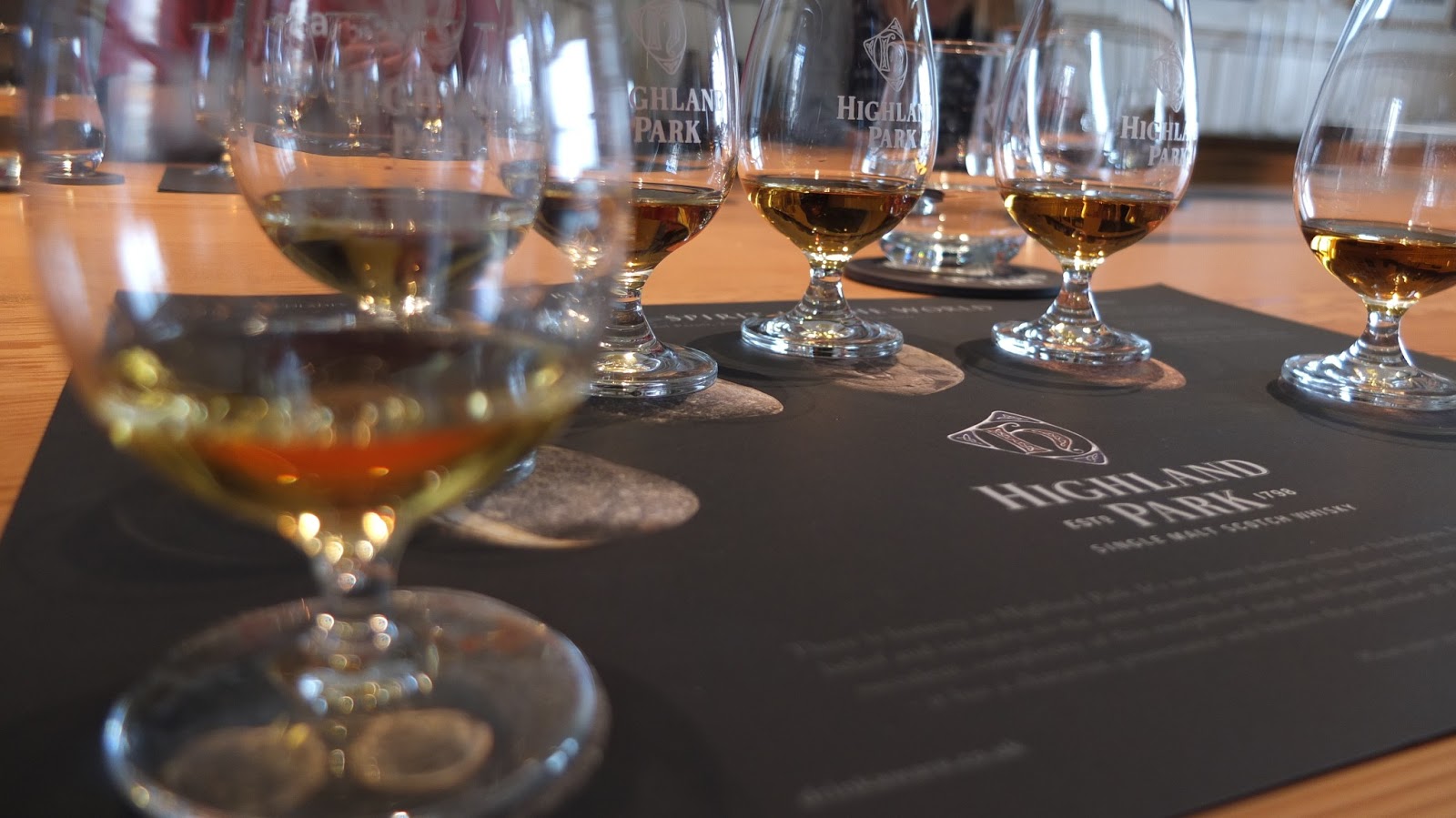 Faced with the 30 year and 40 year malts is a special moment and in terms of vintage we were saving the best till last. Our own final verdicts would prove interesting overall and in no way followed the age criteria. If we were using the Master of Malt sample service then these 2 drams alone would set you back £55 thereby confirming the great value of the tour. Progressing up the years the mixture of bourbon versus sherry was evident and the subtle changes throughout the range. I felt the 40-year-old was in danger of losing the battle with the cask overall and the wood taking centre stage. Whereas the 30 year maintained the dignity and strength of character. Yes, tasting the 40 year was a treat but every time I would reach for either the 25 or 30 year releases. This followed the general thoughts of our tour guide and the other Magnus Eunson tour participant still preferred the 18 year. That’s the joy of whisky as no one is right or wrong – just follow your tastebuds and preferences.
CategoriesSingle Malt
Tags
highland park