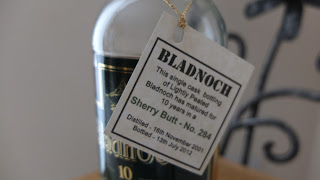 After the wonderful sherry excess of Cadenhead’s Highland Park bottling, I felt inspired enough to start a series of Taste reviews that feature sherry casks. For a while I’ve had a trio of bottles waiting for such a moment; a sherry beast from Tomatin and two Bladnoch sherry casks that will make for an interesting comparison.

So first up we have the youngest of the Bladnoch duo, which I bought in 2012 and was very well received by the Bladnoch forum regulars. Since then it has sold out at the distillery, with an older sherry bottling as its replacement. In saying this however, online retailers still have this bottle if you do want to try it for yourself. This was cask 284 at 10 years and the 2013 version is cask 283 at 11 years. Both have the lightly peated influence, there is also a 12 year sherry matured on sale currently without the peat – this is other bottling I’ll be reviewing in a separate piece. 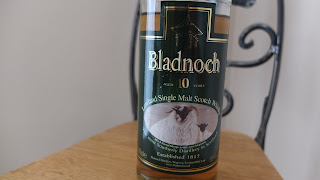 I’m sure those of a sherry persuasion will find more to savour here despite this leaning towards a cask finish than a definitive sherry release. I guess this is a refill sherry butt as it lacks a real kick of sherry, depth of flavour, colour and is more middle of the road not knowing exactly what it wants to be. Add a drop too much water and you’re let with a characterless dram so it is a real balancing act. My own preference is the lightly peated Bladnoch but we have another Bladnoch to taste shortly so watch this space!

Raith’s verdict:  I prefer this one with water but only a tiny amount as it is very fragile. Even in saying this I’m not really taken with it hugely – despite giving it a third of a bottle to grow on me; there has been no sudden appreciation or love.

After the disappointment of the last Taste review, I’m back for another Bladnoch but this time one that is truly sherry matured and therefore full..

Cask selection plays a huge role in the flavour and development of any malt. It can be the major single determining factor during maturation so..