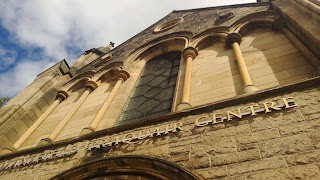 The Whisky Fringe sees malt take centre stage during the annual Edinburgh August Festivals for its own piece of the action. Set in the historical venue of Mansfield Traquair, the hall plays host to independent bottlers, distilleries and huge corporations; all showing their wares to the eager paying public. The £24 ticket price grants you access along with a discount voucher for £10 off a 70cl bottle from Royal Mile Whiskies, a Glencairn glass and a token for the ‘half-time orange’ which I’ll come back to later on. You are also encouraged to vote for your favourite dram with the overall winner being announced later this week. Needless to say the event is almost an instant sell out within minutes of the tickets going on sale.
The venue is an impressive setting and can accommodate a large number of guests which is a must with such an event; if I was being critical the day felt a little too crammed. With no real seating area as such, you were left find a quiet corner to sit down and take a break from the scrum around the stalls and dodging overzealous whisky enthusiasts and attendees who seemed blissfully unaware that they were ramming their oversized backpacks in your face. Amid this ruckus I did attempt to have a small discussion about some of the whiskies on offer; particularly those from Nikka and Buffalo Trace being from outside of Scotland. This was an opportunity to sample of their ranges and hear a little more about the process and background of each distillery in question. The hosts were very eager to explain but had little opportunity to do so with another attendee butting in asking for a sample. If you are wanting to engage and discuss then this isn’t a suitable arena whereas the Whisky Luxe event did offer this chance albeit it at a much higher ticket price. Instead, the Whisky Fringe was treated more like a lads day out with the chance to have a session for £24. So, a little less in my opinion makes for a more enjoyable experience. 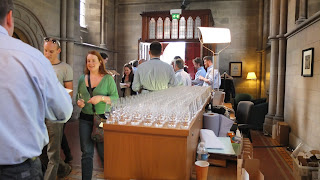 Like kids in a sweet shop I suppose the temptation is too much for some. The crowd was a good mix of young and old, foreign and local with a healthy scattering of females who were enjoying their drams. The venue was well decked out with water machines and spittoons so you can seek refreshment and dispense with a generous or unwanted measure. This is how I navigated the vendors offering around 250 drams in total. Having initially researched those on offer, I then selected my preferred hit list. For instance I knew the Bunnahabhain 25 year old is a fantastic whisky, but this event was more about extending my experience with new whiskies. Stalls also offered oatcakes to break up the onslaught of liquid in your Glencairn glass.
The event is well supported with 26 stalls nicely arranged around the hall ranging from Glengoyne to Douglas Laing. There really is something for everyone here and in general the stallholders support the event with a generous range of whiskies on offer. In saying that however the most disappointing stalls were the Macallan with just 2 offerings from their no-age-statement colour themed range and Diageo, which offered just the basics. Also I felt Glenmorangie and Ardbeg should have offered a little more than just 2 bottles each. Perhaps they all see their target market at more luxurious events or a nearby boardroom, executive lounge or clubhouse? 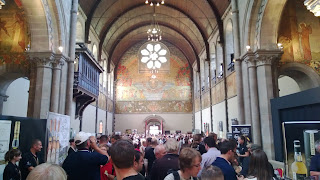 There was much to saviour across the 250 whiskies on offer. Everyone I’m sure had a handful they were eager to sample and some that had to be relegated for another time. So I sadly bypassed the Compass Box stand and the Diageo stall that included the Talisker Storm and Port Ruighe offerings.  Instead here are some of my memorable mentions:
Longrow red wine (Shiraz) cask finish – this is still being observed by the distillery but the cask influence is apparent on its appearance and it has a very dry finish for a whisky. Very different and somewhat enjoyable, I’d like to spend more time with this one and it should be released later this year. You can see it in the photograph below, the 3rd bottle on the right: 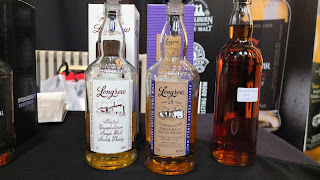 Buffalo Trace – I’ve not experienced a massive range of American bottles and this was the pick of the bunch from what I tasted on the stand. Extremely smooth and pleasant compared to what I’ve tasted previously. Food for thought.
Yoichi 10 year – The coal fired stills are still going strong and the Nikka stall confirmed their strength across each of their distilleries; Yoichi, Taketsuru and Miyagikyo each standing out. Then the Pure ranges and From the barrel showing their blending prowess with a strong finish coming with the Coffey Grain bottling. 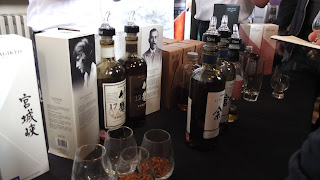 Benromach Port Finish – sweet as expected and shows the continuing development of this distillery. The 30 year old was another fine sample to be had here.
Balblair 1997 2nd Edition – Another rising star and this was certainly a good malt, probably not as great as I had expected given the praise some were dishing out. However I have been fortunate to have tasted a few Balblairs before this one over the past few years.
Kilchoman 100% Islay 3rd Edition – at the end of a terrible piece of road on Islay, this wee distillery does its own thing and it is working clearly from this fruity offering. The RMW exclusive cask strength edition was also another strong malt that showed complexity beyond its juvenile age. 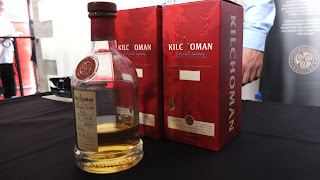 Port Dundas 21yr Clan Denny – I enjoyed this bottling on the Douglas Laing stand as well as the young (and certainly fiery) Caol Ila. Everyone was going mad for the 21 year Highland Park, which was from a bourbon cask and vanishing extremely rapidly, but if you had tasted the 2013 Cadenhead sherry cask release then you would know it was lower league stuff in comparison.
At 4pm the ‘half-time orange’ comes into play and this is where you can hand over your voucher for a sample of a very special bottle available on most stalls. Sadly the Nikka stand did not have a special bottling today and the list of oranges was on display as you arrived (see the photograph below), so you had at least a couple of hours to decide. It is a gimmick, as a vendor did say to me that they do not get the chance to talk about what makes this bottle so special; instead if the crowds are building they have to grab the tickets and pour those 10ml samples asap. So from this aspect I can see why some don’t put much effort into a special bottle or even take up the offer. 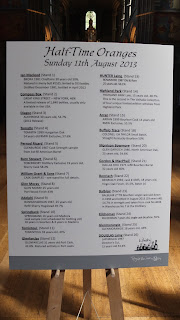 Nearer to 4pm and clearly some punters had already decided as some stalls ground to a halt with visitors waiting for the whistle and then the pouring to begin. It is fun to behold and feel the excitement building as everyone waits for the half-time whistle. Many (like myself) had decided upon the 30 year old Brora sherry cask from Chieftans which was being offered at the Glengoyne stand. A very generous offering, opening a £300 ‘sold out’ bottle and it lasts as long as it does; 1 ticket, 1 dram until the bottom is reached. I actually had 2 tickets for the event so I was able to saviour a more generous sample of this malt, mainly for convenience so I didn’t have to wait elsewhere or divide and conquer. It was excellent stuff and indicative of the Brora’s I’ve tasted beforehand. If this wasn’t on offer then I would have dashed for the Kilchoman 7 year old as something worth experiencing.
Without question the Whisky Fringe 2013 provided a barrel of enjoyment for many attendees. I did enjoy being able to sample some interesting drams and broaden my whisky horizons just a little more. Whether you treat it as a learning experience or a session with mates is entirely up to you and I’m sure the 2014 version will be just as successful and frantic.
CategoriesUncategorised

The much maligned debut of the Whisky Show in Glasgow, or Scotland for that matter takes place later this month at the Grand Central Hotel…