Balvenie distillery likes to focus on craftsmanship and the skill of individuals to bring their whisky vision to life. The whisky fete is an extension of this allowing the general public to see their head cooper Ian MacDonald at work, which is always an impressive spectacle, discuss whisky with experts and perhaps have a sample of the malt. For those wanting a little more, then for Warehouse 24 members special tastings are available and for non-members a pairing session with chocolate from the local Thinking Chocolate on London Road. 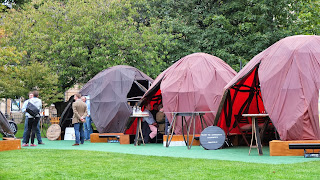 I have to mention these unique dome constructions that were covered over for the Scottish climate. Luckily if you visited the London event you would have seen then in their true naked form. These are constructed from Oloroso whisky butts that have completed their purpose in life and now live on in another form outside your local Garden Centre. They possess a rigid beauty and I did debate whether my garden would be suitable for such a creation.

The cooper displays his skill in the sole uncovered dome, allowing for 360 degree viewing and hopefully some appreciation from the onlooking public of what a valuable craft this is. If you are in Edinburgh over the next couple of days, even if all the classes are now fully booked, I’d suggest the visit being worthwhile just to see Ian MacDonald in action. 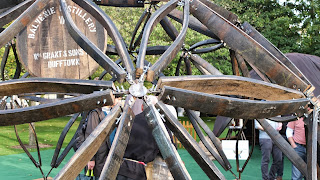 There are 2 tasting domes and the remaining structure is home to Royal Mile Whiskies which is selling just Balvenie on site. I almost ventured back to this dome after the tasting as the Tun 1401 Batch 8 was something special; you just know it when you have sampled the masterful blending of Balvenie.

The tasting session itself was lead by an entertaining Balvenie expert who took us through the various stages of production and the key differences at the distillery compared to others.  It made for interesting listening, especially as it is one of the few distilleries I’ve yet to tour myself. I’ve already pencilled it in on my 2014 list to visit. For the tasting event 12 of us where ushered into the dome and set to work going through the core Balvenie range. Going through the range is a sadly too rare experience for many. It gives the opportunity to highlight the subtle differences and the importance of the cask in providing 60% of the flavour.

While I’ve been to many tasting events that include a well versed brand ambassador and a quality field of whiskies, the key ingredient are the participants. Whisky has that unique ability to bring strangers together; prompting much hilarity and discussion within our dome. It certainly made our session overrun as everyone was having a great time tasting and engaging and that’s what whisky can do. 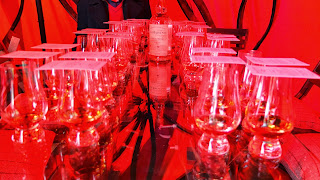 The plastic sheeting that protected us from the chilly Scottish climate has given every photograph a warm red glow within the dome so I will refrain from any more! The 6 Balvenie drams that made up the event were:

Balvenie 12 year old single barrel first fill – I enjoyed this one, very easy drinking and laced with vanilla due to the use of American oak.

Balvenie DoubleWood 12 year old – very smooth and sweet. Sugar was high in the attendee comments and food pairing examples did favour desserts such as Christmas cake, creme brulee and sticky toffee pudding. It was hampered by being bottled at 40% and suffering from a short-lived finish.

Balvenie Caribbean Cask 14 year old – I was looking forward to tasting the rum influence on this one and it does feature a wonderful nose. This sets the expectation extremely high and while it is fluid on the palate, the finish again is very brief. Still, we did hear about the rum experiments at Balvenie and how they obtain the casks required for this whisky. I’d suggest it as an interesting discussion piece for any whisky tasting session.

Balvenie DoubleWood 17 year old – the star of the night until the final dram. A remarkable level of complexity; a malt I could spend a few hours dissecting in greater detail. Why 17 years? Well, this seems to be the perfect age for Balvenie according to the ambassador and arguably whiskies in general. Perhaps for Balvenie, but do try and sample the Cadenhead’s Highland Park 25 year old sherry butt to show you can go beyond.

Balvenie PortWood 21 year old – This whisky split the group with some preferring it over the 17 year old but to me the 17 year had the edge. A sweet dram and it felt like a caged animal being bottled at 40% compared to the 43% of the 17 year old. I couldn’t help but think about the Benromach Port Finish from the 2013 Whisky Fringe that is bottled at 45% in comparison and is bursting with port sweetness.

Balvenie Tun 1401 Batch 8 – tasting this final dram was a real treat and almost sparked a rush onto the Royal Mile Whiskies dome for the last remaining bottles. It is priced out of reach of many attendees, but we all welcomed the opportunity to experience this increasingly rare release and fully appreciate the craftsmanship of the Balvenie. If one thing summed up the message of craftsmanship evident throughout the fete then this dram did so perfectly. Looking at the label with the various casks utilised and the skill involved, it is a remarkable whisky and the fete is well worth dropping by if you can.

There are single malts you enjoy and do not question. If someone was to ask me which core malts I would expect to find easily..