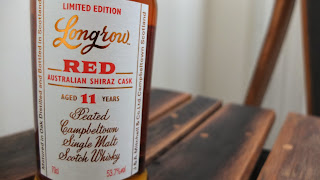 Each year Longrow/Springbank put aside a quantity of double distilled and heavily peated malt for a special finish. They often try something totally different each year and the results can vary greatly, as shown by the Cabernet Sauvignon finish from last year which divided opinion. For 2013 we have a Shiraz finish which I first tasted during the 2013 Whisky Fringe. You can read my comments on that article but the immediate distinction was the colour of the dram followed by a long, dry finish. Intruiguing was my initial summary and I really wanted more time with one to fully appreciate it’s characteristics.

So when Cadenhead’s released the Shiraz the following month, it was a necessary purchase and here it is. I’ll be doing a taste review later this month, I promise. Despite the backlog of bottles if there is one that I do want to experience first, then it’s this one. 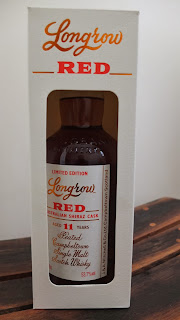 So in the meantime here is the blurb from the back and the specific details – looking forward to opening this one shortly!

‘First distilled in 1973 Longrow is a double distilled heavily peated single malt produced at Springbank Distillery in Campbeltown. The malt is peat dried for up to 48 hours to give the whisky a unqiue Campbeltown-style smoky character. Less than 100 casks of Longrow are filled each year.

This Longrow Red Single Malt has been matured for six years in refill bourbon hogsheads followed by five years in fresh Shiraz hogsheads and only 9000 bottles at cask strength will be available worldwide.’