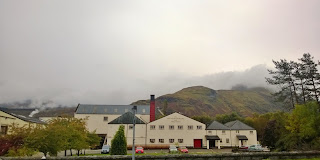 Living in Scotland and visiting distilleries on a regular basis, quite often you take things for granted. Just browsing through my photographs of Ben Nevis whilst preparing this article it struck me what a marvellous setting the distillery finds itself in. The location is in perfect harmony with nature allowing for water from Ben Nevis to be used during production .

Ben Nevis has a proud history highlighted by the recent recreation release of it’s traditional whisky. Fort William itself may be in a current era of decline with empty shops and businesses but for Ben Nevis, and it’s owners Nikka, there is added impetus about restoring the Ben Nevis name. A brief look at the various awards on show in the distillery suggests that things are indeed moving in the right direction. And while I didn’t fork out for the single cask sherry release you can read my own thoughts on the traditional whisky later here this month. 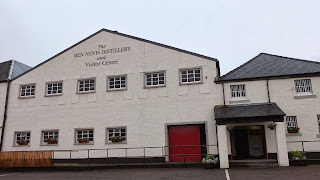 I’ll try to refrain from using the word ‘traditional’ too much during this piece but that’s the feel of the distillery when you visit. There is a retail chain/major label effect running through most Scottish distilleries that have similar facilities, displays and almost a million pounds spend on each visitor centre. Aiming for luxury and playing games with history, the true character and history of a distillery can almost become lost amidst the facelift.

Ben Nevis has a more rugged, regional and laid back atmosphere. On site there is a small cafe with just a couple of tables. The food is home-made and represents good solid if unspectacular offerings. On the cold October day I visited, the soup was most welcome along with a pot of tea. As the tours runs on the hour and the shop is on the small side, you can pitch up for a bite to eat or drive across the road to fill up on petrol for your car – don’t try to consume that! 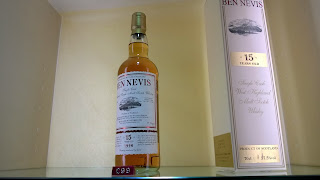 ^I will purchase a bottle of this one day. It is difficult as any whisky fan knows to try and keep up with potential releases without forming a habit or lacking appreciation. Maturation takes time and so should we when enjoying our purchases. The tour itself costs just £4 per person and includes a small dram at the end of the tour with a discount on a full-sized bottle if you choose to purchase one. You cannot argue with the tour at that price and our group was made up of mostly visitors from North America who were very new but keenly interested in whisky.

The tour proceeds through the various usual haunts of any whisky tour; the only obvious missing candidate was a warehouse. This is a shame as the warehouses have often doubled for production stages in films such as Highlander but for us there were out of reach. 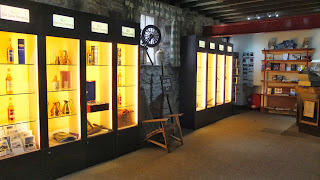 Photographs are allowed throughout the tour which is always great news! It is frustrating how dramatic some distilleries can be with regards to health and safety, whereas others will interpret the same guidelines/rules with more composure.

The traditional feel continues throughout the distillery which was in full production the day we visited; the only day off is Sunday which heralds back to the roots of the original owners. A loved and used feel persists throughout each of the rooms; from the grist hopper, the cooler to the mash tuns, Ben Nevis works hard. 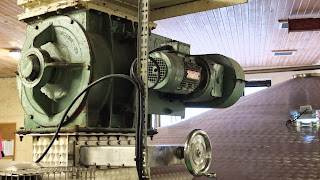 This was interesting tour brought to life by an experienced guide who spoke from personal experience. Many tour guides on my distillery visits will be students on weekend jobs or even non-UK nationals such as a lovely American woman who did the tour at Caol Ila. This was more authentic and his own thoughts mingled with the company line to good and refreshing effect.

Ben Nevis feels small through the first few rooms and the modest selection in the mash tun room. Then you venture across the main courtyard area towards the building that houses the stills and it feels epic! Unfortunately we were not allowed to clamber up amongst the stills on the upper level yet it remained an impressive sight. 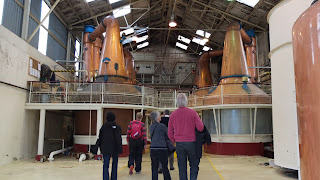 Thereafter we enjoyed a discussion about the importance of the casks whilst standing amongst a huge selection. The warehouses were mentioned and loomed large but were not part of the tour as mentioned earlier.

The overall feeling was that of an introduction tour; one for tourists or those just beginning to delve into whisky. It certainly left me wanting more as I believe Ben Nevis has a very interesting past and future. 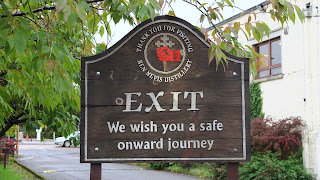 As always I took too many photographs to post here so there are available to view right here or I have created an album on the Whisky Rover facebook page. In all there are around 30 photographs allowing you to enjoy a little more of Ben Nevis. The malt isn’t widely available and that’s a shame as it is a solid dram. The ease of access to the distillery if I am heading up to Skye (which happens twice a year currently) means I’ll be back for more.