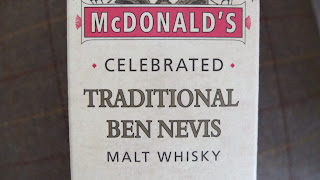 Last month I managed to drop by Fort William on my way to the Isle of Skye specifically to visit the Ben Nevis distillery on the edge of the town. The location is ideal as you don’t need to journey into or through Fort William itself. The distillery is hard to miss set against the stunning backdrop of Ben Nevis itself.

I’ve rounded up the distillery tour for Ben Nevis here. While the tour allowed you a taste of their staple 10 year old malt, my interest was in the single Sherry cask release; a nice numbered edition but one that was surprisingly more expensive in the distillery shop than with some online retailers. So, I switched to my other bottle interest the recreation of the traditional McDonald’s Ben Nevis. 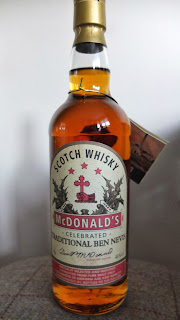 Last month with the Black bottle blend I debated the current vogue for distilleries and blenders to return to their roots and recreate old styles of whisky. Even since last month we’ve had the Tweeddale blend that is bringing to life old family records. For the McDonald’s Traditional Ben Nevis we head back to 1882 when the Ben Nevis and Nevis distilleries were both producing under the guidance of Donald Peter McDonald the Dew of Ben Nevis whisky; a hugely popular malt whisky from that bygone period.

Of course the Nevis distillery is no more and this recreation relies solely on the remaining Ben Nevis distillery. Independent suppliers were also obtained to provide peated malted barley from the Moray Firth region. Research also provided clues regarding the types of yeast and maturation of at least 5 years. For the 1880’s this was a very generous maturation period and not the norm. As for this 21st century reboot, we’ll have my tasting notes later this month. 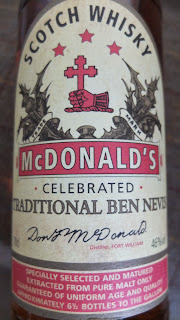 The other side of Ben Nevis