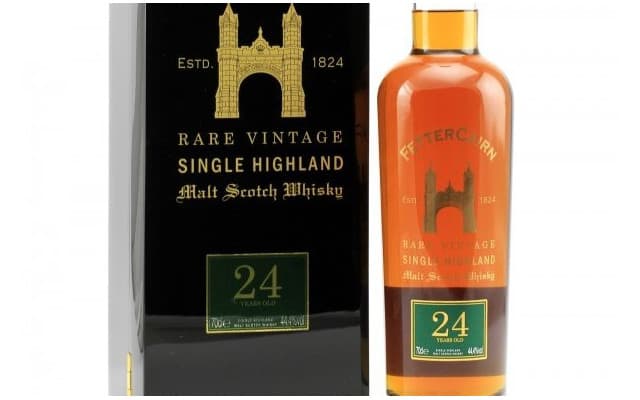 A new distillery! Must admit, I’d only recently even seen a Fettercairn in a shop – though that was a different bottling. Still, that they were in supermarkets made me frown, as I considered they should really have been on my radar a little more. So I opted for a couple of samples of the Fettercairn 24 Year Old.

Located way up in the northeast of the Highlands (it gets its water from the Cairngorm Mountains), Fettercairn distillery was established in 1824, which makes it pretty damn old as far as distilleries go. It’s owned by Whyte & Mackay – ultimately the United Spirits Group – who haven’t released all that many bottles from the distillery over the years. The majority of the whisky ends up in blends.

Colour: a brooding storm-cloud of a whisky, this. Teak sideboard. On the nose: sherry blast, then raisins and sultanas. Roast chestnuts. All the Christmas classics, in fact. Then distant Manchego cheese and something rather leathery. Extremely intriguing nose, I must admit, with a lot going on.

In the mouth: ooh, that’s lovely. About as silky as whisky gets. You barely know it’s in your mouth and then all the flavours trickle through. Dried fruits, stewed apples, and then some sharper berries – almost a sloe gin edge to it. Very interesting. Dark, dark chocolate. A long creamy, buttery finish. In fact, I very recently tried roast chestnuts with butter, and the final notes of this dram really remind me of that.

This is like a very good Dalmore, though a bottle will set you back about £130. That said, if this was Dalmore, they’d probably be charging you at least four times that and limiting the strength (I kid!) I’ll most definitely be investigating more of Fettercain at this rate… My tip: it’s worth hunting out some samples, as I did.