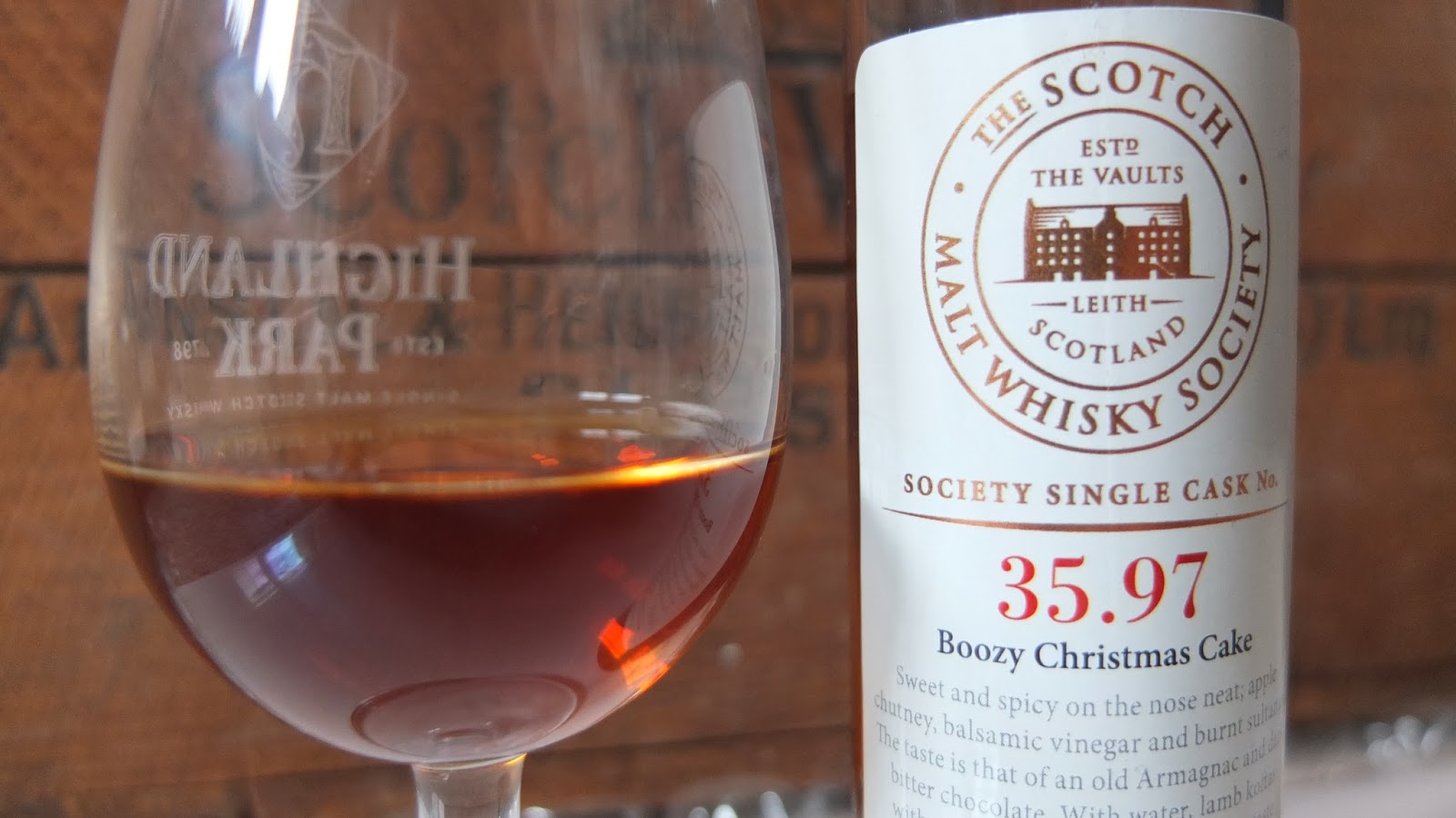 Regulars will know I finally gave in and joined the Scotch Malt Whisky Society recently after years of deliberation. As part of your initial membership you receive a package containing that includes amongst other things a trio of whiskies. Now we’re going to tackle each of these in order of age, over the next 3 weeks, starting with a 10 year old.

I suppose given this is my first taste review from the Scotch Malt Whisky Society (SMWS), I should first explain their distinctive numbering system. Independent bottlers generally want to proclaim the distillery on their label often overstepping the unwritten rule that the distillery name should not be more prominent than the bottling company. Cadenhead’s have a nice symmetry that is fair to both sides, as we don’t want anyone thinking they are buying an official bottling. Some bottlers place greater emphasis on the distillery and in this age of fashionable whisky you can appreciate such a simple marketing trick is very effective. 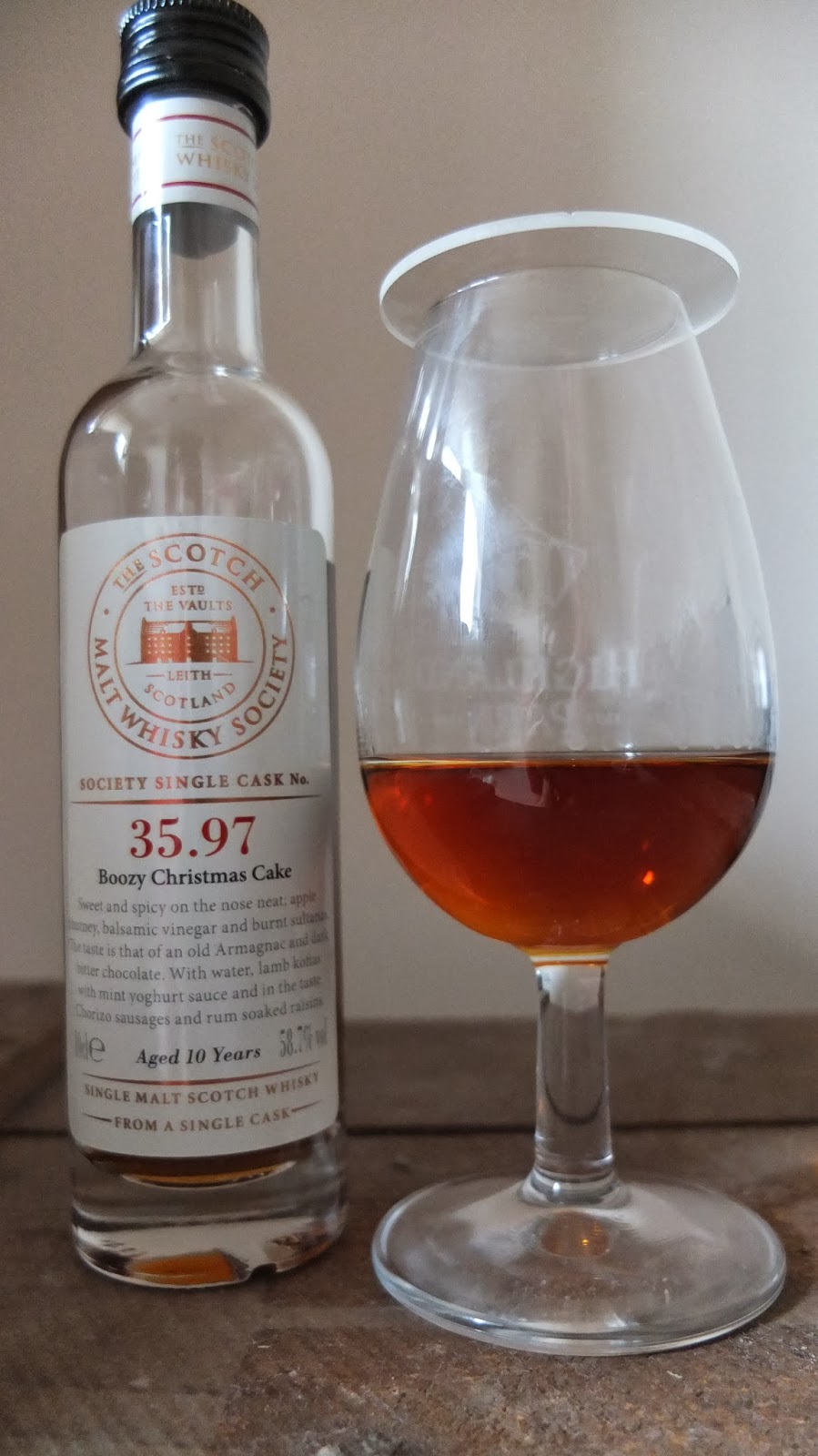 The SMWS utilises a numbering system with each distillery given a specific number. So 35.97 tells us that this is distillery 35 is from Glen Moray. The 97 means that this is the 97th cask they have bottled from the distillery itself. For a full list of the distilleries then please click here. I quite like this method as it focuses your attention on the colour of the whisky and the decorative description that adorns each bottle rather than it being an Ardbeg or a more unknown distillery.

The SMWS have a tasting panel that comes up with these lavish descriptions. I’m going to try and avoid reading these in detail and will only return to the official notes after I’ve done the piece, which should prove an interesting comparison. Environment and the glass plays a huge part in the characteristics of any whisky. The SMWS releases are cask strength so water also comes into the equation. 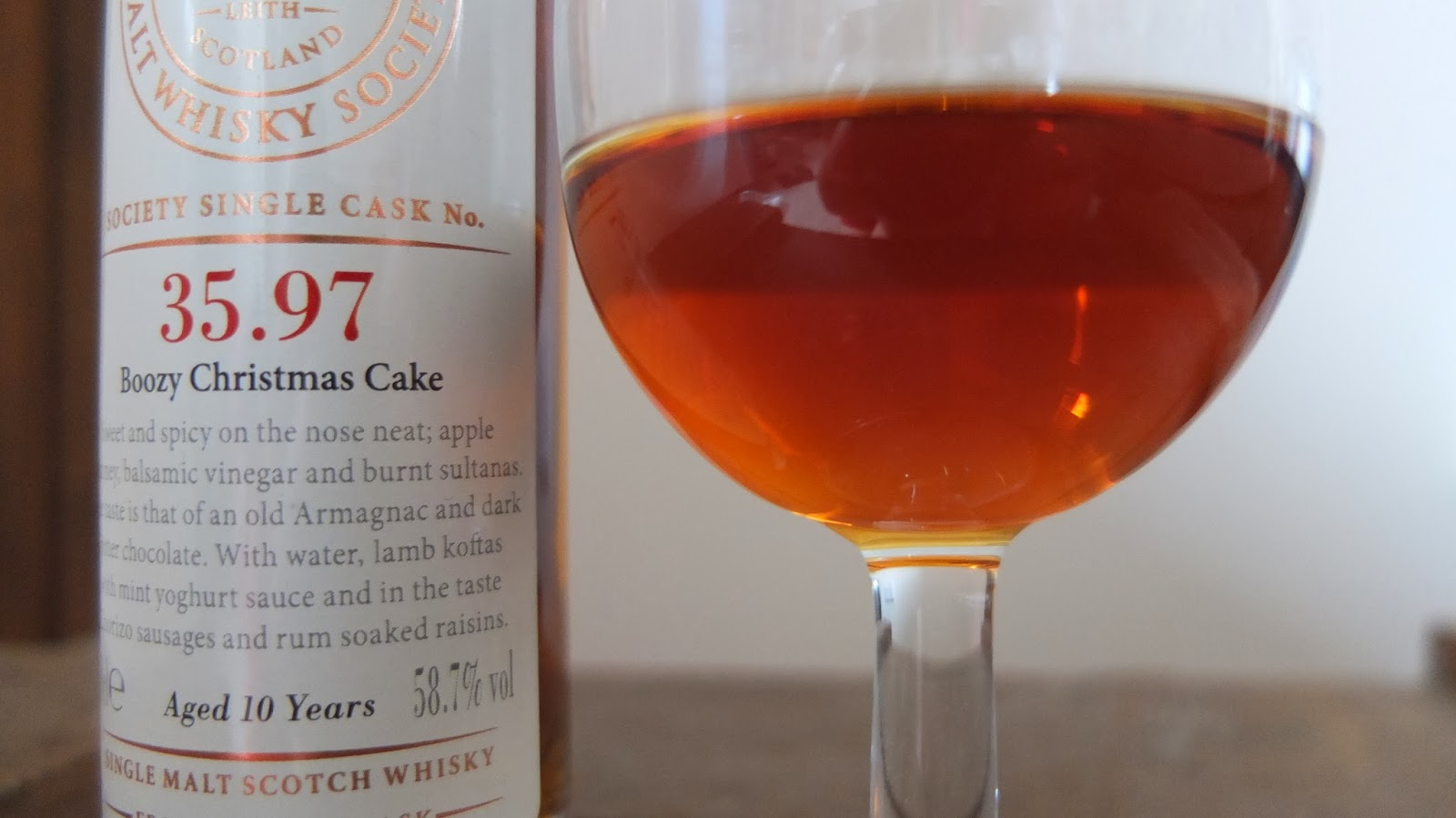 Nose: malt vinegar, cinnamon, boozy raisins, marzipan all of which don’t come as a surprise given the strong suggestive colour of this dram. Then what does startle is a faint creamy note along with an after eight mint flourish.

Taste: this isn’t a shy dram; macerated oranges are first up, a real taste of leather followed by only what I can describe as Lucozade from my youth. There is a real youthful vitality to 35.97. that will only improve with age. In its current form this is a full on force that lacks complexity on the palate. Still very enjoyable and a wake up call for anyone opening up the membership pack.

Since joining the Scotch Malt Whisky Society I’ve bought a dozen or so bottles but arguably not as many as I should have. I struggle..