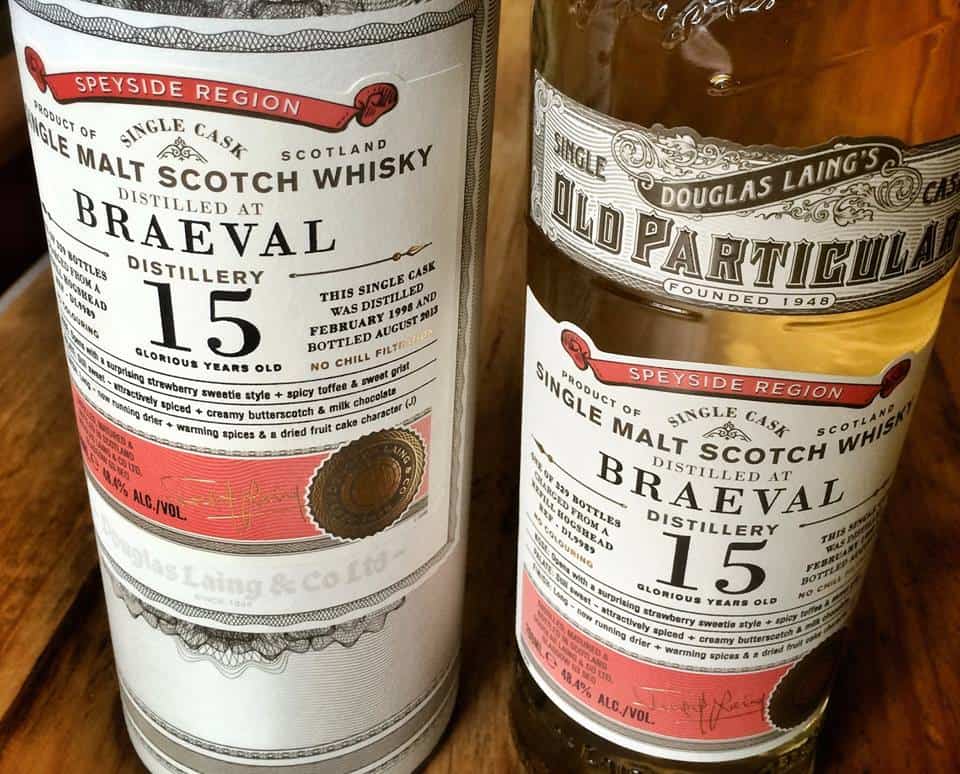 Many moons ago I participated in a Twitter tasting for the Douglas Laing Old Particular range. The drams were very good indeed. So when I strolled past (straight into) my local whisky shop, Gauntleys of Nottingham, I came across a few other bottles from this fine selection. After being impressed with the samples, I picked up one bottle of a distillery I’d never tasted before – Braeval.

This Speyside distillery, also known as Braes of Glenlivet, is fairly young by some standards. Built in the 1970s by Chivas Brothers, like many hidden gems its produce was destined for blends. When Chivas became owned by Pernod Ricard, the distillery became mothballed in 2001, only to become operational again in 2008. This Old Particular independent bottling was a 15 Year Old, distilled in 1998 – part of the old regime – and bottled at 48.4% ABV.

In the mouth: extremely elegant. Some surprisingly young stuff here: malt barley, citrus kicking around. Some nice vegetative stuff going on here: earthy, mossy. Again those fruit notes coming in from the nose, with a little gentle woodiness – though not at all dominating like for some drams. Whatever Speyside character really is, this isn’t your typical dried-fruit kick. There’s something else going on here. This is an interesting stranger with stories to tell.

Expect to pay about £60 a bottle, but they’re not all that easy to hunt down. Worth it, just to try another rare distillery.

Another week has flown by and its time for another mystery dram kindly provided by malt-review. For those unaware we swap a series of unidentified..