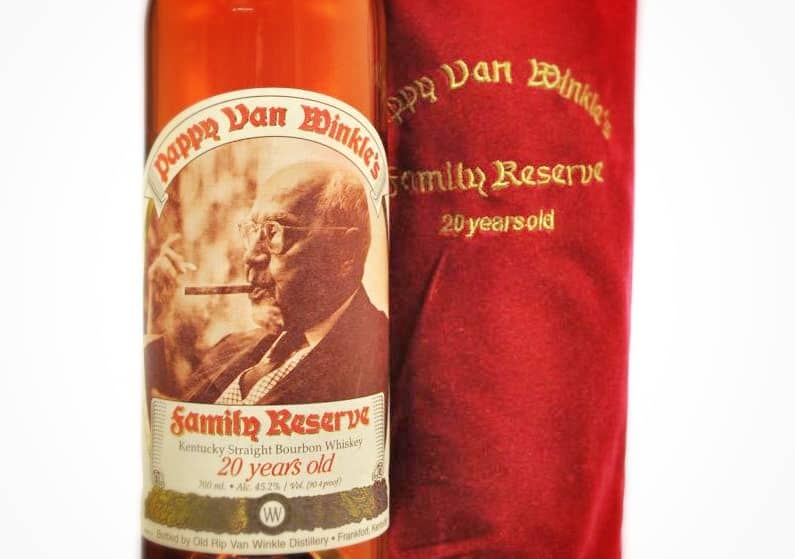 I was lucky enough to acquire a sample of this some time ago, but for some reason or another haven’t come close to reviewing it. Maybe its time wasn’t right. Maybe it deserved a more considered, focussed post. Or more likely I just forgot about it after I went through a bit of a bourbon phase (I have binges from time to time, where I really want to explore several classic drams of a particular type).

For those of you who have never heard of this whiskey, Pappy Van Winkle’s Family Reserve Bourbon is the mutt’s nuts of the Old Rip Van Winkle Distillery. It’s legendary, in fact. It’s bottled, however, by the Sazerac Company, and thought by many bourbonites to be one of the top whiskies in the world. It’s also pretty rare and collectible, selling out as quick as a flash. Think an Ardbeg limited release, without the ridiculous marketing. Except, unlike Ardbeg, it isn’t immediately being sold by the lorry-load on auction sites by shysters. I like to think Pappy’s bourbon is being properly consumed instead, by old farmers in the Deep South, who have had a particularly good year and are treating themselves.

There’s probably no point in me reviewing Pappy Van Winkle’s 20 year old Family Reserve Bourbon – you’ll do well to get hold a bottle, and you might need to sell a vital organ to get one, but I’ve come this far and I’ll carry on regardless.

Colour: heather honey. Blood, albeit if you’ve been on a sunbed for a fortnight. On the nose: red wine, cherryade, stewed fruits, warm jam with a huge amount of sugar that hasn’t quite set. Incredibly sweet, but not overwhelmingly so if that makes any sense – which makes it very unusual. It’s a dense sugary note, rather than it being full on. Compact, like a molasses bomb.

In the mouth: cherries galore, but Jesus wept! What an incredible texture. Ever so silk-like (and silky is not a term I really like to describe whisk(e)y of any kind). You can hardly feel it sliding around your mouth, merely the sweetness popping in various places on your tongue. Rice pudding with a dollop of jam in the middle. Figs and dates. Honey. Treacle sponge? Not quite. A dozen cheap sweets certainly. Maybe even Lucozade.

Conclusions? I’ll be buggered if I know what to make of it, except to say it’s the most eye-opening bourbon I’ve ever consumed.