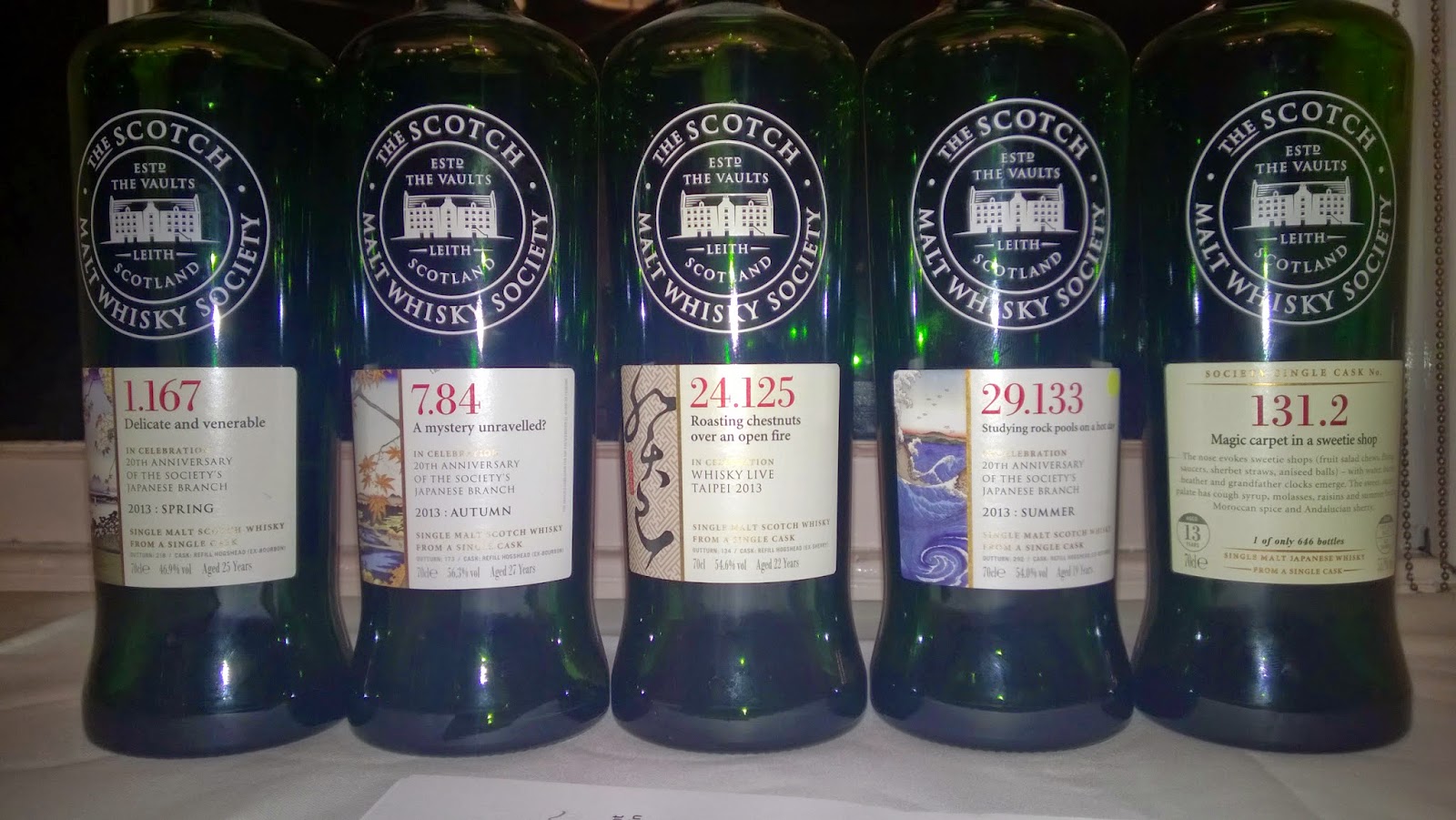 Whisky fashion is all things Japanese currently so it was unsurprising that last week’s Japanese Branch special tasting event at the Scotch Malt Whisky Society (SMWS) in Edinburgh was almost a sell-out. The Queen Street branch is my local in terms of where I work; making this one congregation I could not miss out on.
This was my first proper attended event following an article for the Unfiltered magazine and dropping out of the Dunfermline tasting evenings for various annoyingly poorly timed coincidences. The price for members was £32 and non-members £40 from memory. This covered the cost of 4 exclusive samples and another dram from a Japanese distillery – more on these later – and a Teriyaki supper. This was a glazed chicken on a bed of noodles accompanied by a Japanese salad that matched the evening and whisky rather well. 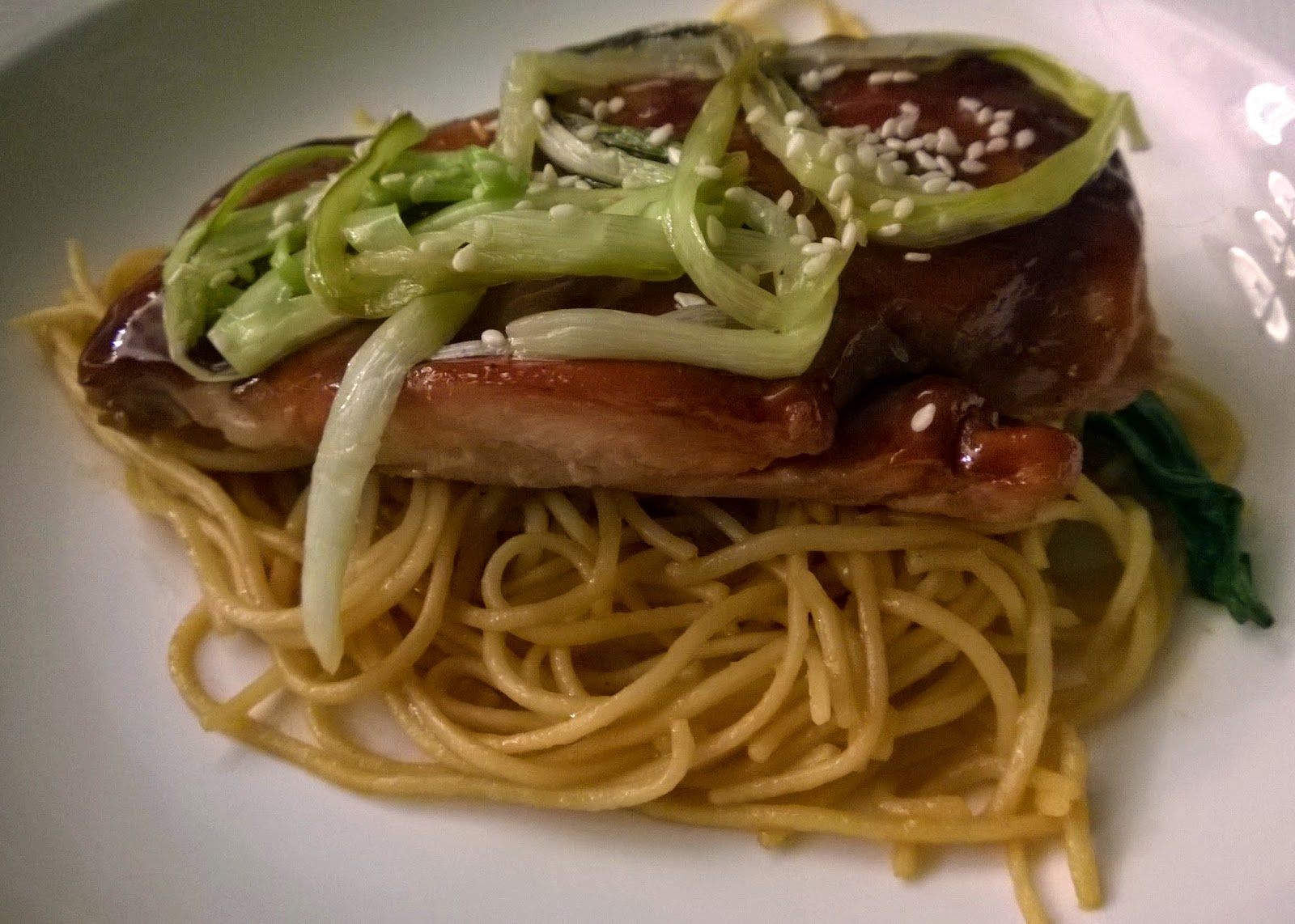 I often attend events on my own which may surprise some reading this but after a dram I find that the invisible barriers/constraints of those sitting around the table soon vanish. In our corner we had a pleasant retired couple from Yorkshire enjoying all that Edinburgh can offer and PDX Whisky who was about to embark on a trip up north to visit several distilleries. Rounding off the motley crew were the couple I’d only previous met virtually via the Harris Distillery cask owner’s scheme. It is a small world and everyone brought a personality to the table with PDX giving us the view from across the pond.
Generally the room was a mix of regulars, experienced whisky enthusiasts, tourists, a couple new to the joys of whisky and a representative from the Japanese SMWS branch. In other words an ideal blend backed up by some fine drams for an evening of entertainment and new discoveries; it’s just unfortunate my lift arrived shortly after the event concluded. Perhaps that’s a good thing in retrospect with work the next day and an unbeatable whisky selection at the bar.
Our SMWS guide for the evening was Ben Kaylor who admitted he had to do a little research on Japanese whiskies prior to the event being thrust outside his normal geographical realm. Looking back now I felt that Ben did an excellent job of balancing Japanese and Scottish whiskies and made a point of frequenting the tables to see how everyone was doing. To kick things off after his introduction we started the first of a trio of malts laid out before us, with the SMWS tasting notes and details to hand for future reference. Those unfamiliar how SMWS bottle their whisky can read a little more from a previous piece here. I do enjoy this approach as without extensive or geeky (if you prefer) knowledge of the numbers you’re a little clueless. What matters most is how the dram tastes regardless if it’s from Macallan or Aultmore. 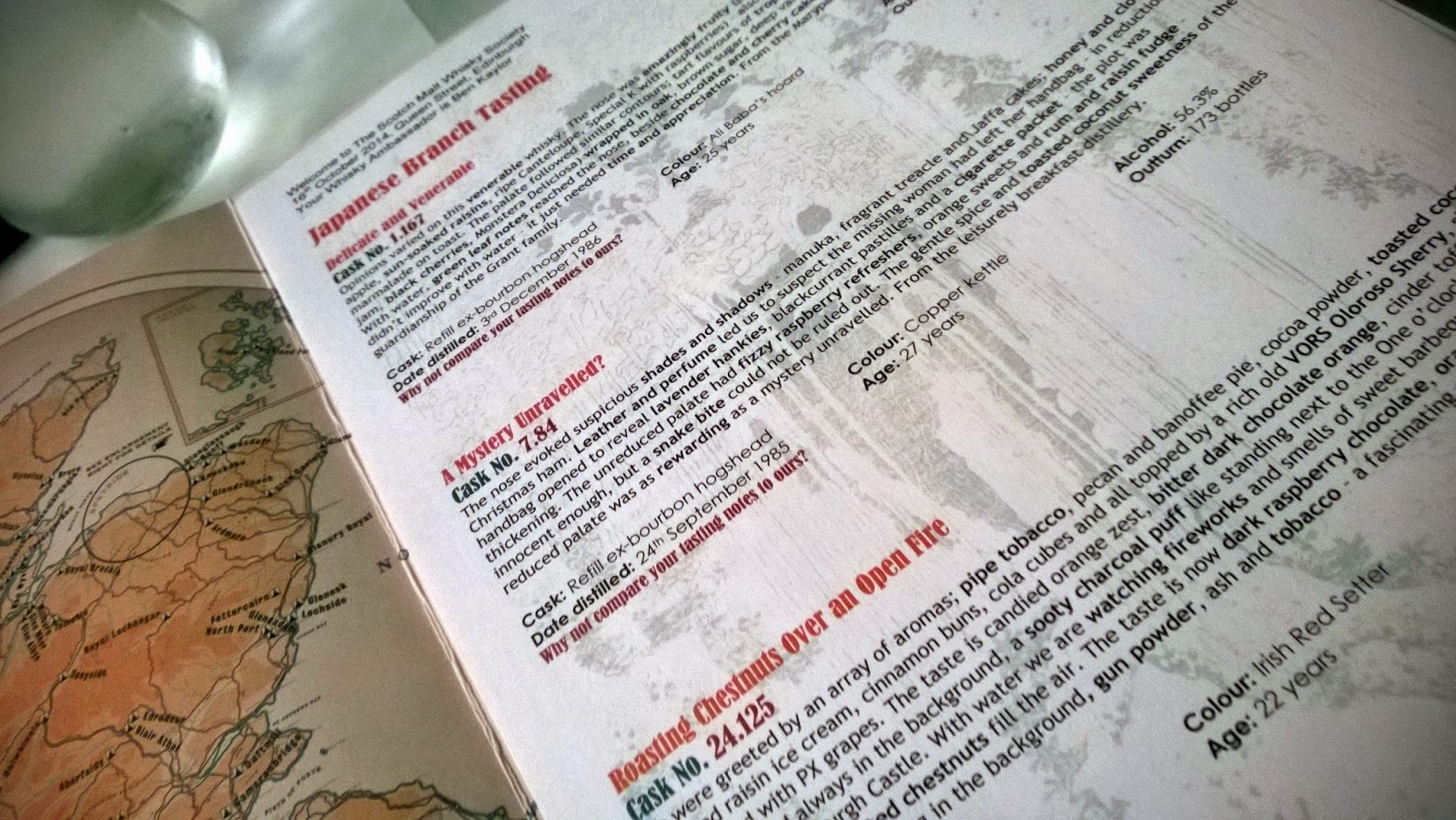 An added attraction of the event was that we were able to taste 4 of the special edition SMWS bottling’s specifically released for Japanese members to celebrate the 20th Anniversary of their branch in 2013. This coincided nicely with the 30th Anniversary of the SMWS itself and needless to say some special casks were selected for the range of distinctive bottles adorned with Hockusai inspired labels. Having never been seen previously before outside of Japan it was a marvellous opportunity, bolstered by the addition of a Japanese whisky that had sold out upon release earlier this year.
Normally when I attend vertical tastings, distillery tours etc. I refrain from making tasting notes as it’s not the best environment to truly dissect a whisky. Instead I was here to expand my experience and enjoy a well-deserved evening as a SMWS member. I have reproduced the tasting notes and details from the hand outs we were given on the night and also included my brief thoughts on each dram. A handful of bottles were available to purchase at the bar during the event, but I’ll come back to that after the notes for each. 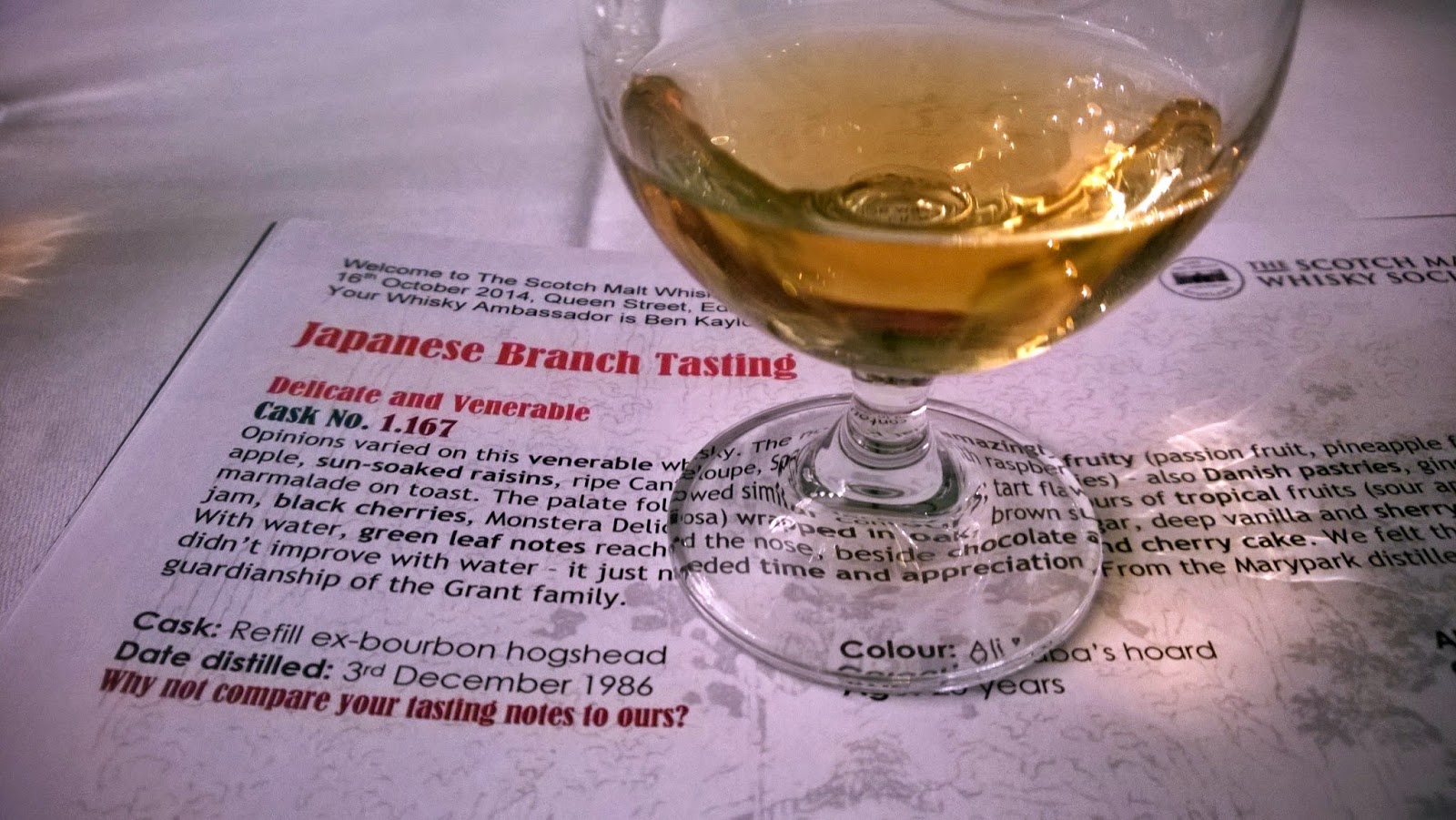 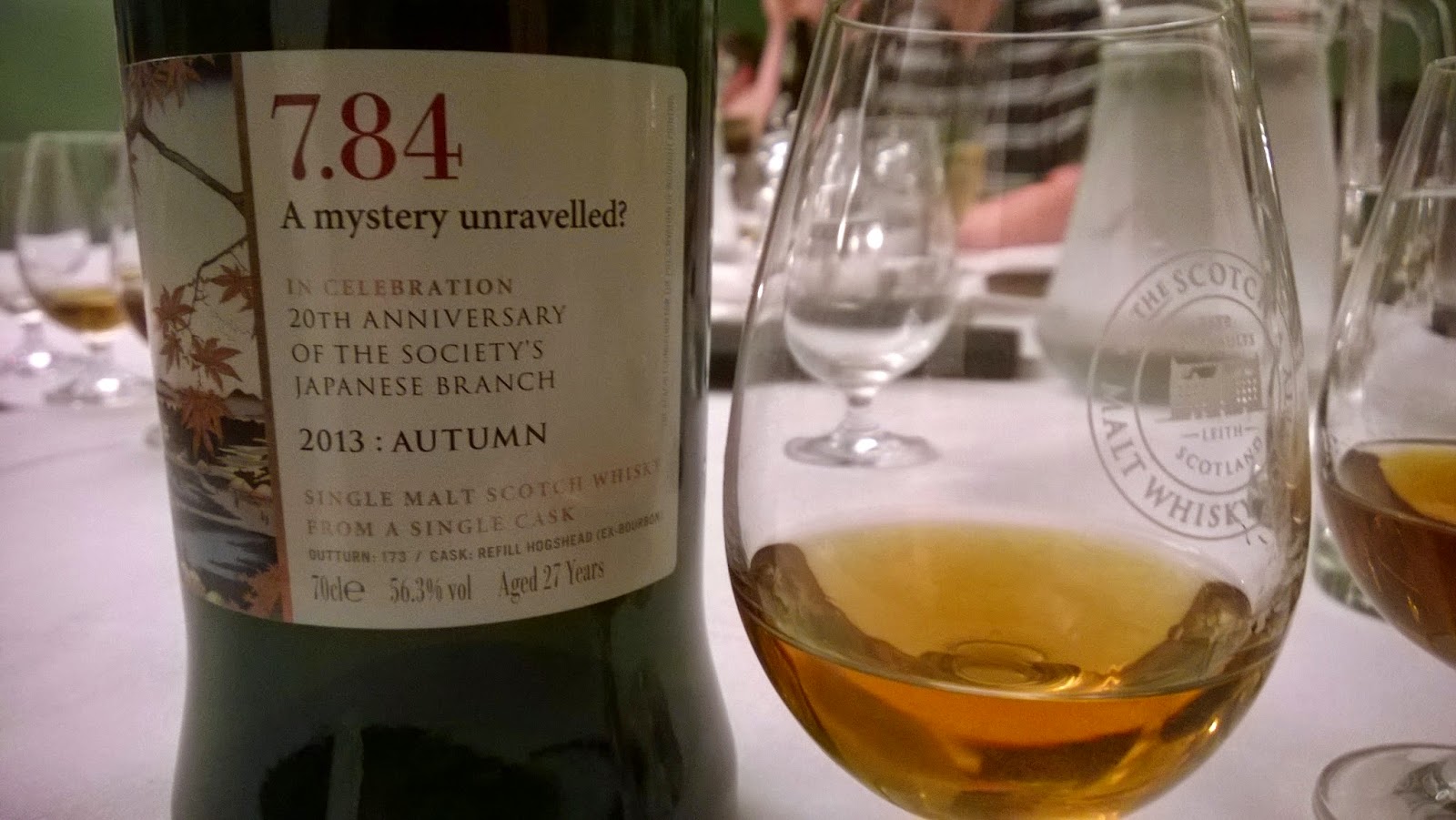 A mystery unravelled?
Cask No.7.84 (Longmorn, Distilled 24/9/85, Age 27 years, alcohol 56.3%, 173 bottles)
Cask type: refill ex-bourbon hogshead
The nose evoked suspicious shades and shadows – manuka, fragrant treacle and Jaffa Cakes; honey and clove on a Christmas ham. Leather and perfume led us to suspect the missing woman had left her handbag – in reduction, the handbag opened to reveal lavender hankies, blackcurrant pastilles and a cigarette packet – the plot was thickening. the unreduced palate had fizzy raspberry refreshers, orange sweets and rum and raisin fudge – innocent enough, but a snake bite could not be ruled out. The gentle spice and toasted coconut sweetness of the reduced palate was rewarding as a mystery unravelled.
Whisky Rover: wow my dram of the evening really despite some big guns from other distilleries. I’ve been debating whether to purchase a cask from Longmorn and this bottle sealed the deal. 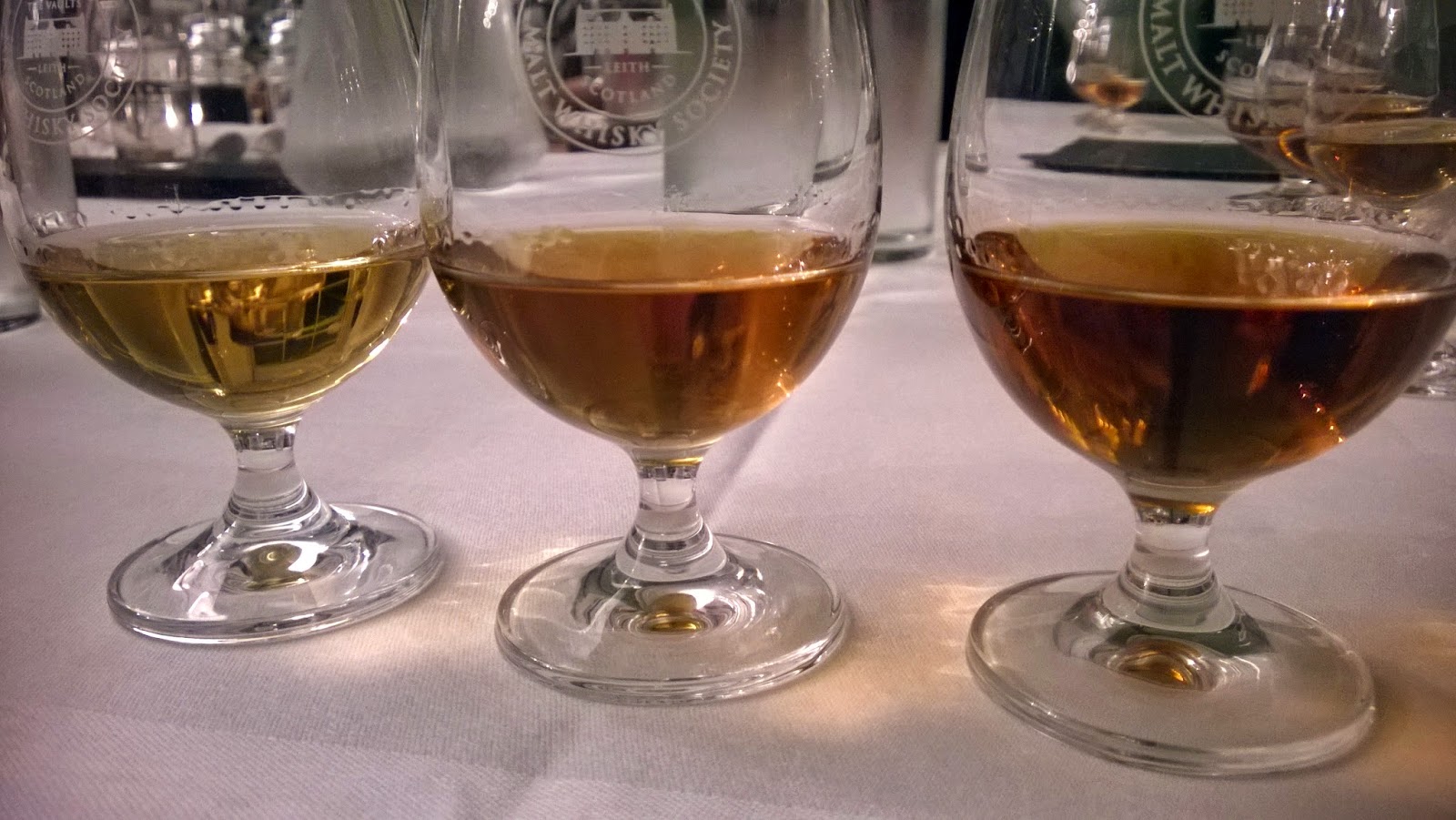 Roasting chestnuts over an open fire
Cask no.24.125 (Macallan, Distilled 31/12/90, Age 22 years, alcohol 54.6%, 134 bottles)
Cask type: refill ex-sherry hogshead
We were greeted by an array of aromas; pipe tobacco, pecan and banoffee pie, cocoa powder, toasted coconuts, rum and raisin ice cream, cinnamon buns, cola cubes and all topped by a rich old VORS Oloroso Sherry, slightly sweetened with PX grapes. The taste is candied orange zest, bitter dark chocolate orange, cinder toffee, black cherries, and always in the background, a sooty charcoal puff like standing next to the One o’clock gun as it is fired from Edinburgh Castle. With water we are watching fireworks and smells of sweet barbeque sauce, hot chocolate and roasted chestnuts fill the air. The taste is now dark raspberry chocolate, orange chocolate liqueur and, still lurking in the background, gun powder, ash and tobacco.
Whisky Rover: apologies I was too busy enjoying this one to take a photograph on its own but you’ll see it above on the far right of the trio. I’ve enjoyed some spectacular Macallan’s this year from the 60’s and this chap was a match. 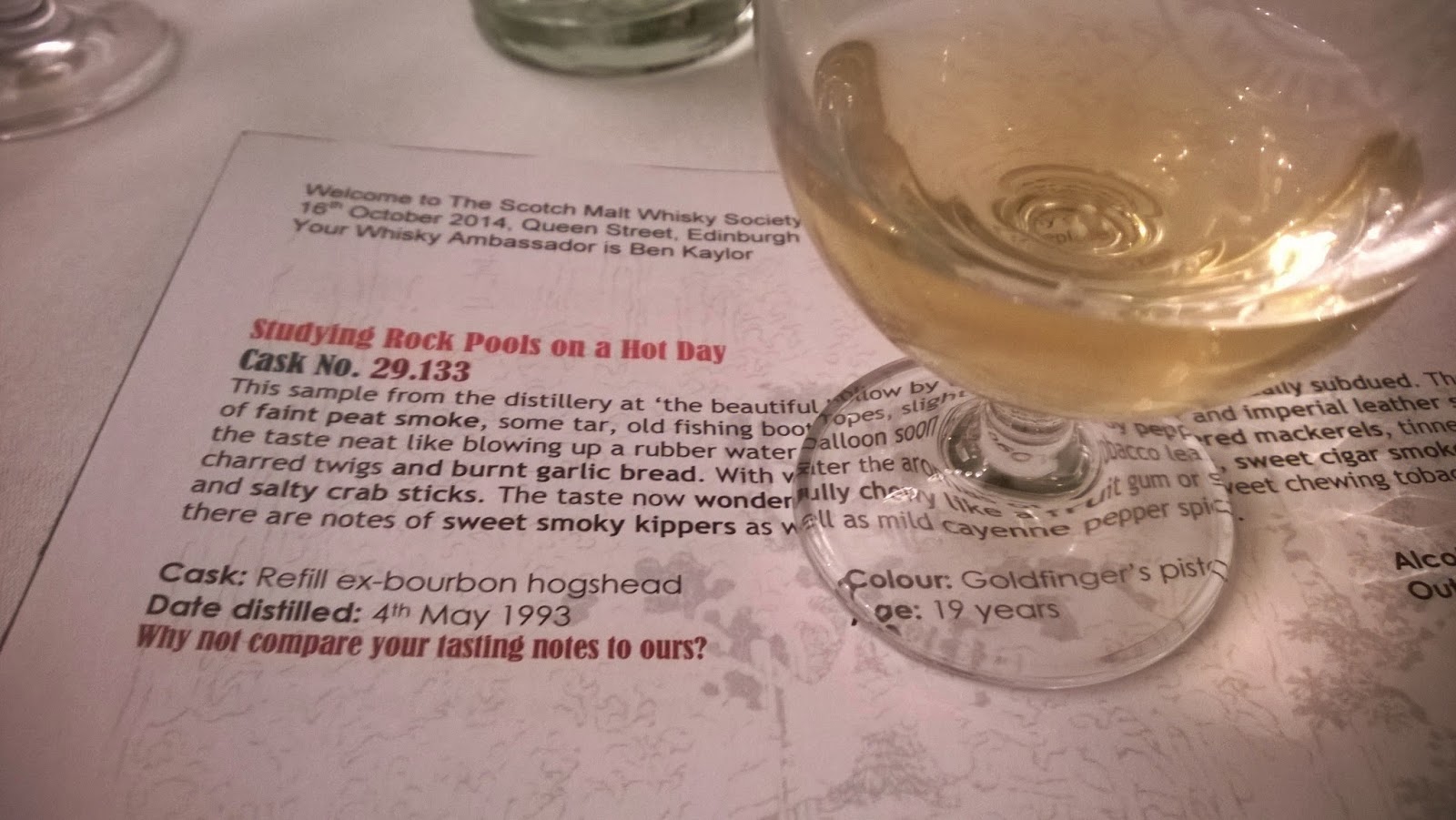 Studying rock pools on a hot day
Cask no.29.133 (Laphroaig, Distilled 4/5/93, Age 19 years, alcohol 54.0%, 292 bottles)
Cask type: refill ex-bourbon hogshead
This sample from the distillery at ‘the beautiful hollow by the broad bay’ was unusually subdued. There was a hint of faint peat smoke, some tar, old fishing boot ropes, slightly singed heather and imperial leather soap. Initially in the taste neat like blowing up a rubber water balloon soon replaced by peppered mackerels, tinned peach syrup, charred twigs and burnt garlic bread. With water the aromas of tobacco leafs, sweet cigar smoke, new leather and salty crab sticks. The taste is now wonderfully chewy like a fruit gum or sweet chewing tobacco. In the finish there are notes of sweet smoky kippers as well as mild cayenne pepper spice.
Whisky Rover: a refined Laphroaig and one you could spend ages peeling away new layers. 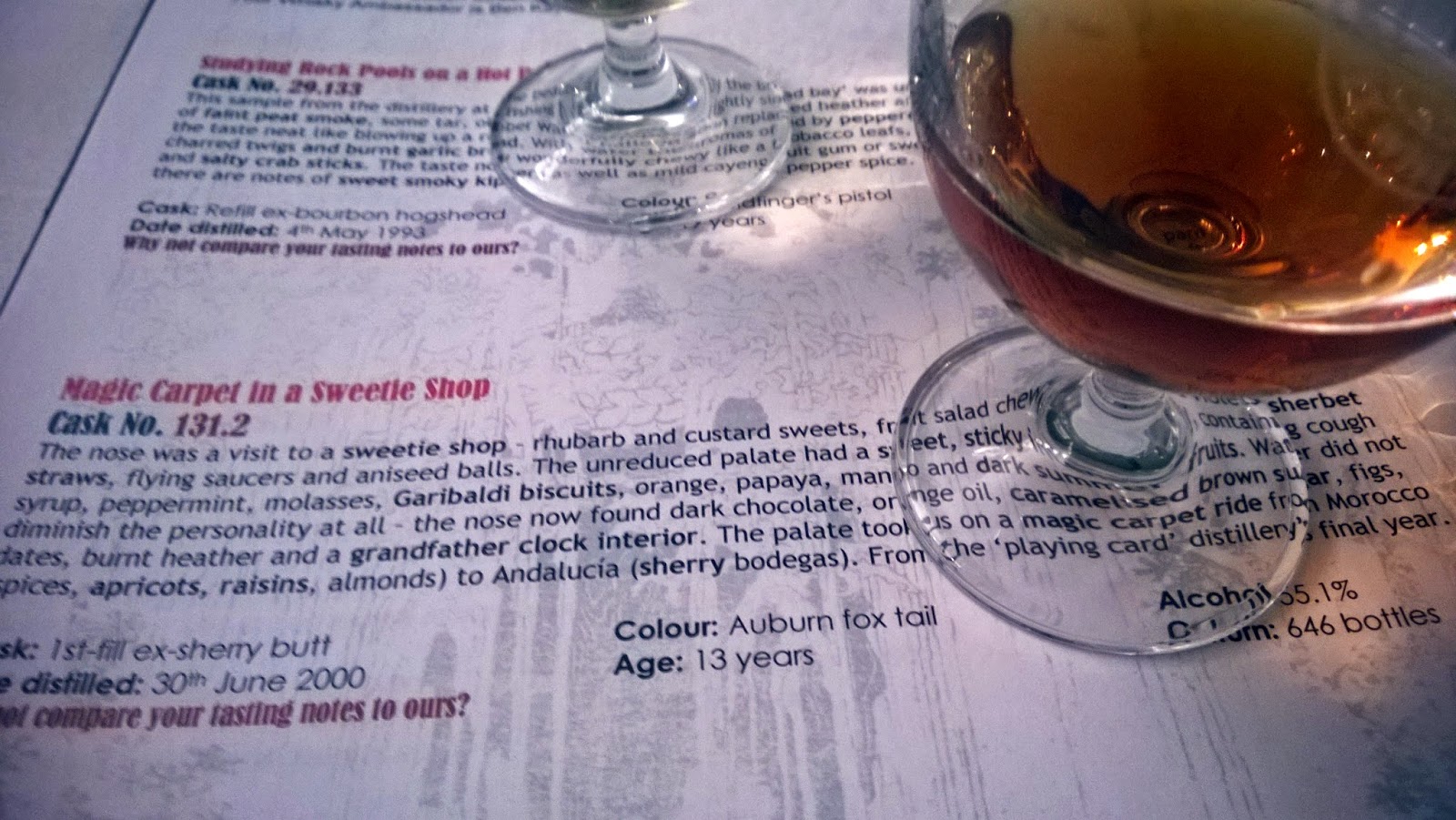 Magic carpet in a sweetie shop
Cask No.131.2 (Hanyu, Distilled 30/6/00, Age 13 years, alcohol 55.1%, 646 bottles)
Cask type: 1st-fill ex-sherry butt
The nose was a visit to a sweetie shop – rhubarb and custard sweets, fruit salad chews, parma violets, sherbet straws, flying saucers and aniseed balls. The unreduced palate had a sweet, sticky intensity, containing cough syrup, peppermint, molasses, Garibaldi biscuits, orange, papaya, mango and dark summer fruits. Water did not diminish the personality at all – the nose found dark chocolate, orange oil, caramelised brown sugar, figs, dates, burnt heather and a grandfather clock interior. The palate took us on a magic carpet ride from Morocco (spices, apricots, raisins, almonds) to Andalucía (sherry bodegas).
Whisky Rover: a great way to the evening with a powerful offering from a sadly departed Japanese distillery – I’m sure I have a bottle of this somewhere and thankfully so!
Overall the whiskies were of a very high, impressive standard and the decision to place the Laphroaig before the Hanyu was brave but ultimately a tactical masterstroke. Now I did mention the option to buy earlier and what stock the SMWS had acquired from Japan was very, very limited and available at the bar that evening. After this announcement I had to leave mid first dram and queue at the bar in third place. When I say limited the bottles numbered roughly; Glenfarclas (2), Laphroaig (2), Longmorn (7) and those greedy Far East members had clearly enjoyed the Macallan which numbered zero. 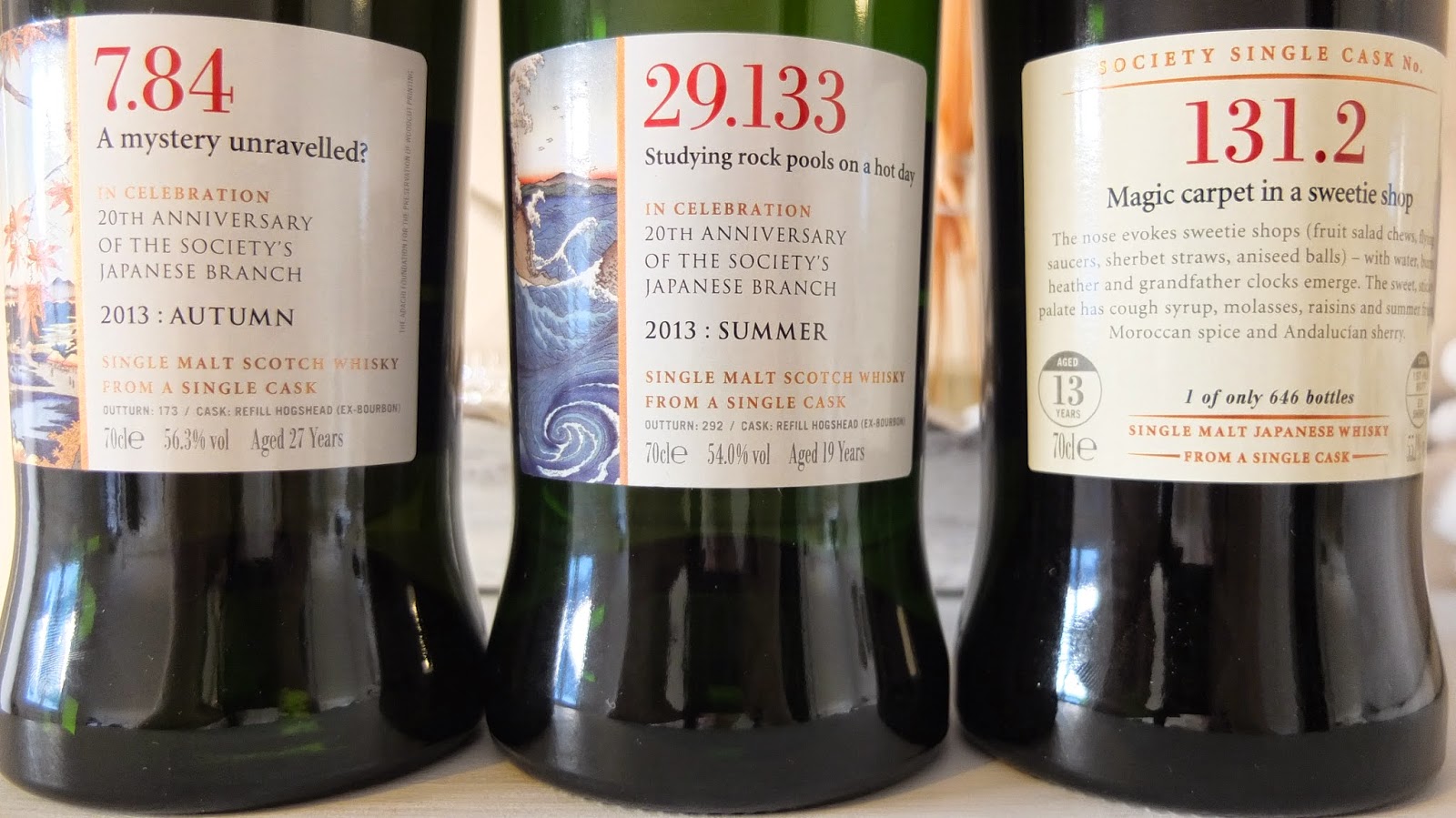 First in the queue purchased a bottle for himself and a colleague upstairs and second in the queue was a Glenfarclas and by this time a decent sized queue had formed in an orderly fashion. Speaking with the older gentleman behind me, clearly he had enjoyed the Glenfarclas and this was the bottle he was hoping to purchase. I do like to do the unexpected and irrational things to some so I decided to step aside and allow him to purchase the last Glenfarclas. A bargain priced at around £78 it is a lovely whisky and fits the staple characteristics of the distillery extremely well.

After this charitable moment I was faced with a couple of blind purchases given the other drams were waiting on me returning to the table. You cannot have everything in life and snapping up each bottle and being greedy isn’t for me – after hearing stories about The Whisky Exchange exclusive show bottlings this seems a rare commodity nowadays. I content myself with a good deed and had heard from others joining the queue that the Longmorn was excellent and who can resist a 19 year old Laphroaig?
In total both bottles set me back £166 which considering their age, scarcity and quality of the whisky was a real bargain and rounded off a thoroughly enjoyable evening at the SMWS Queen Street. A set of bottles worthy of any celebration I’ll think you’ll agree and showing the huge range that whisky offers. Next time I’ll take a proper camera rather than relying on my phone.
CategoriesUncategorised