Maybe the whisky world is starting to pay a little more attention to Deanston. Islay may take all the headlines but on the mainland several distilleries are upping their game and we’re now starting to see the benefits of their confidence as these casks are being bottled. This is particularly true at Deanston.

This is a distillery I’ve visited more than any other to date and I’ll be along shortly this weekend for their Halloween themed tour. Part of the appeal is not only the excellent café, the shop full of local crafts or the unique history of the distillery, but also the distillery exclusives Master Distiller Ian MacMillan and his team put together. I still have fond memories of the Spanish Oak and the bottle-your-own option just continued to improve as I progressed towards the bottom of the bottle.

The Toasted Oak was an illusive exclusive that was bottled again earlier this year; finally I’ve picked up a bottle to complete the distillery hat-trick although the label suggests Batch 1. The original Toasted Oak was bottled at a slightly higher strength of 56.4%, a younger age and an edition of just 690 bottles. It would be interesting to compare both but I’m more than happy to have acquired the 2nd release of the Toasted Oak that is slightly older; I presume from the numbers there will be a final bottling in a couple of years? 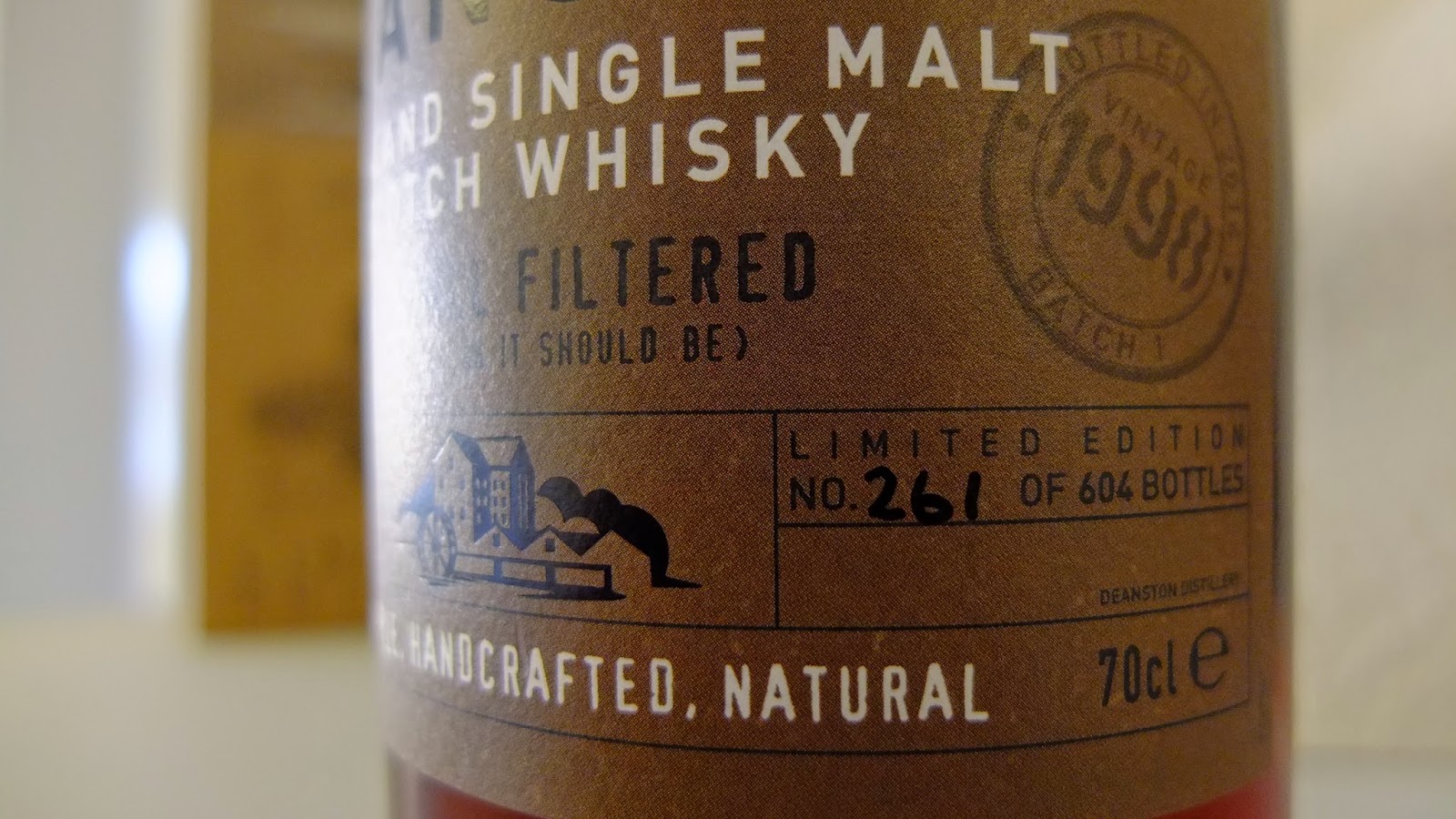 Each of the Deanston distillery exclusives has an interesting tale to tell regarding their inspiration and gestation. For the Toasted Oak it all began in 1998 when the Deanston new-make spirit was put into 8 high quality ex-bourbon casks. These particular casks had been toasted to varying degrees and then it was over to mother nature for 9 years. Then the contents of the 8 casks were married together before going into a handful of young and spritely ex-whisky casks until April 2014 when the Toasted Oak batch 2 was born.

Now when you mention charring casks and a hugely rich colour, many whisky enthusiasts will think of the infamous Loch Dhu. However that’s where any comparison ends as Loch Dhu was heavily laden with E150 (caramel colouring) and this goes against the ethics at Deanston. Plus Loch Dhu was only fit for varnishing your garden furniture whereas the Toasted Oak hits all the right notes. This is everything that the ‘Dhu wanted to be and more. 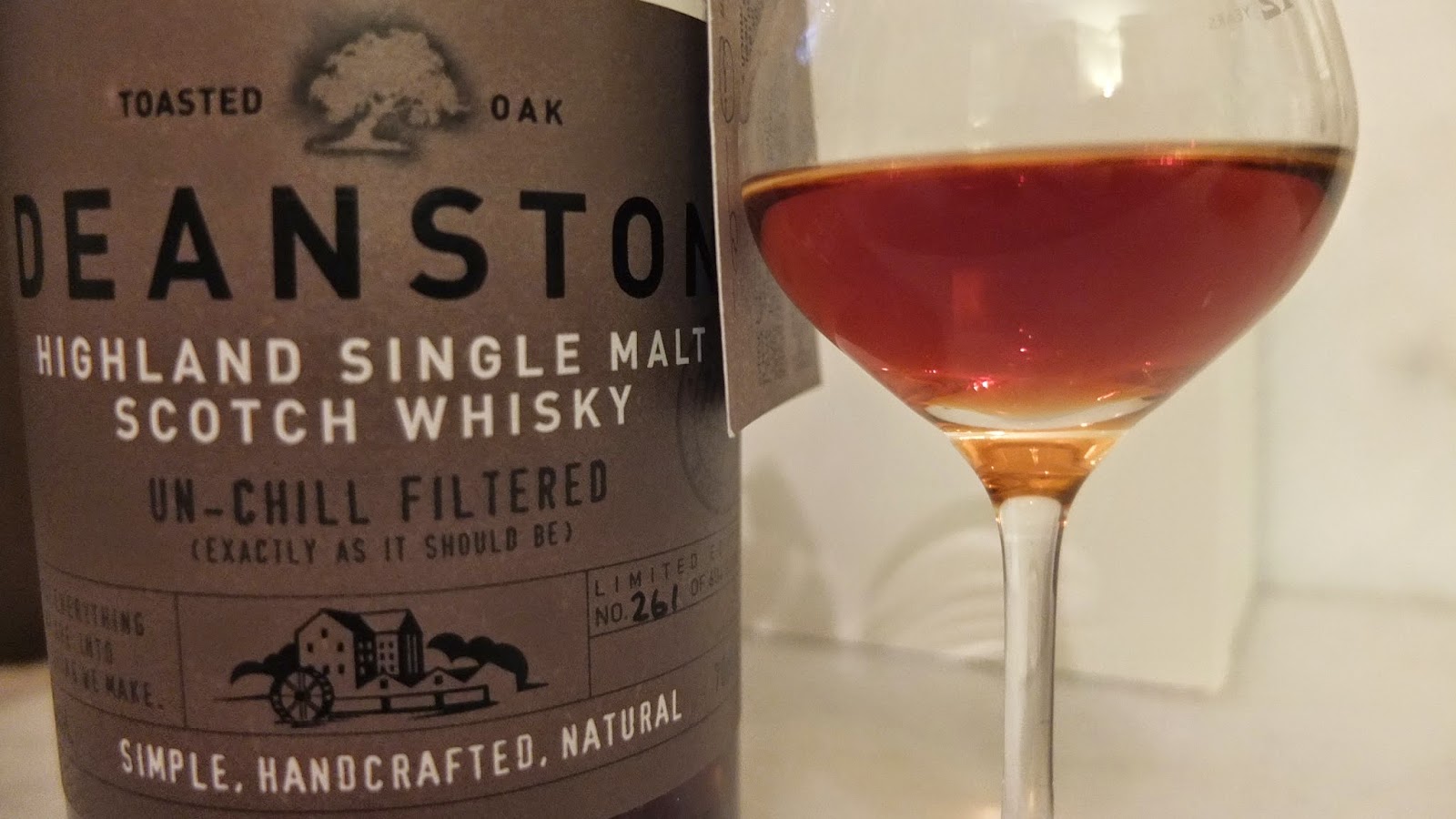 Colour: spectacular – up there with some richly dark and decadent Karuizawa’s I’ve enjoyed and out of the bottle it brightens up.
On the nose: for New Year we do a roasted ham joint glazed with Madeira and bulleted with cloves; the Toasted Oak possesses this richness and depth of flavour. More spices with cinnamon, vanilla fresh from the pod, cola cubes, cherries and a hint of treacle. The charring certainly hasn’t overpowered the spirit, there is a definite balance and harmony present here.
In the mouth: the easiest summary is a rich sticky toffee pudding with the emphasis on dates, which is fresh in memory as that’s what I had for dessert this evening. Ground coffee beans, more roasting characteristics with honey glazed hazelnuts and underneath home made marmalade like your granny used to make. Mmm, sticky cinnamon figs.

This fella is very confident and is quite drinkable without water, but lets try a drop. More sweetness with molasses to the forefront and what I can only summarise as a barbecue essence.

They’ve clearly done it again at Deanston. Whisky enthusiasts are being engulfed with releases proclaiming to harness casks in a unique fashion thereby adding more complexity. Here we have a whisky far more valid in its use and more successful than most. I’ll be more than likely buying a second bottle as this one is disappearing fast thanks to its popularity with friends and family.