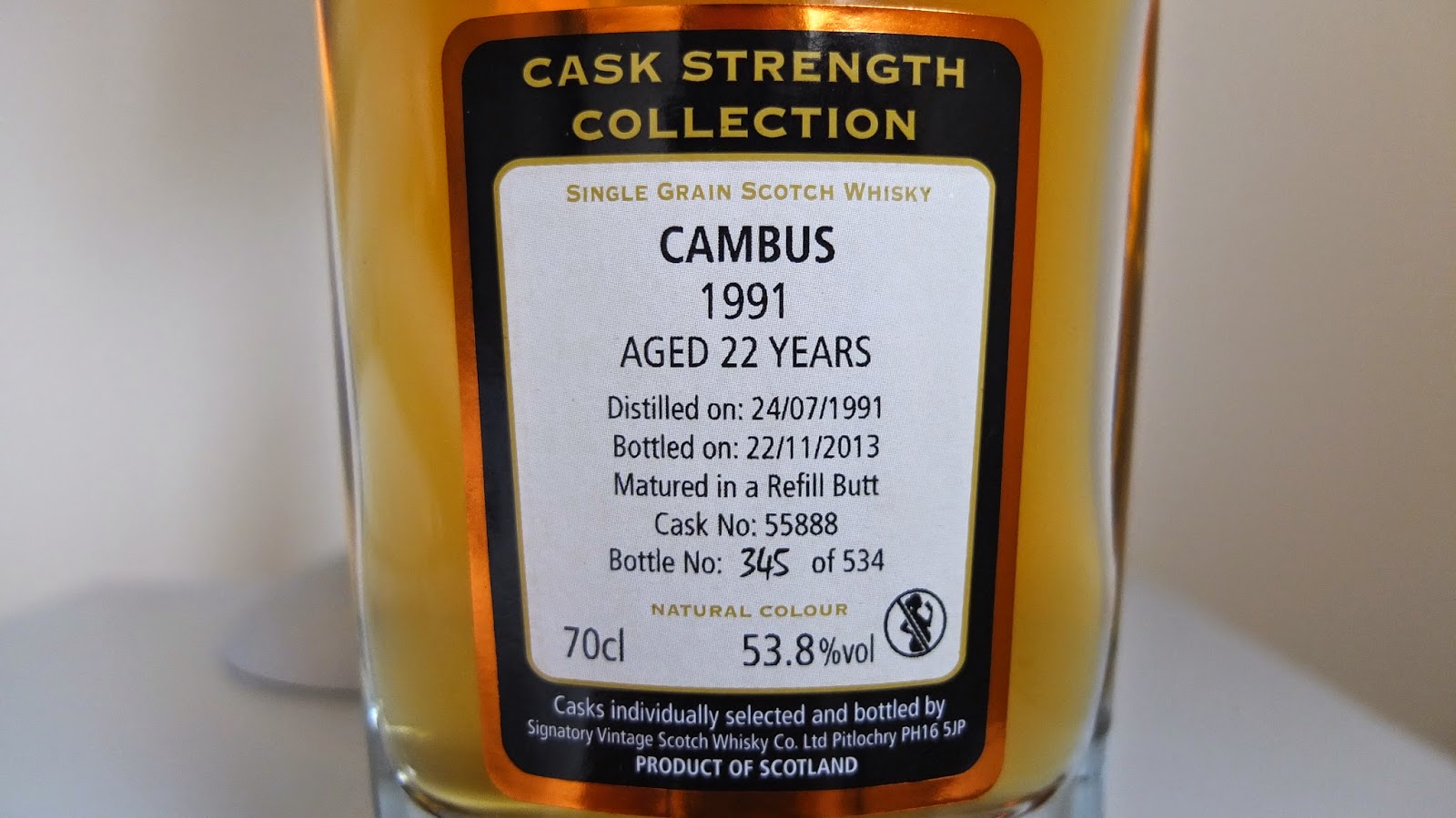 Has there ever been an era such as this where whisky was plentiful and choice abundant?

The boom period may have a couple of grey clouds on the horizon including future repercussions for aged stock and foreign demand. Yet it’s safe to say we’re still spoiled for choice and what with 30 or so new/revived distilleries in the pipeline for Scotland alone, this plentiful crop looks set to continue. The statistical comments about the boom continuing certainly will at least offer some hope but already I fear what will happen when this acceleration drops a gear for some new distilleries.
Navigating retail with such widespread options and slick marketing can be as dangerous as any Indiana Jones escapade. More than ever I’m going back to the future; the last remnants of closed distilleries or discontinued releases. This brings me nicely to Cambus, a grain distillery near Alloa that won’t appear on many wanted lists or during detailed whisky conversations.
In reality there are many distilleries just like Cambus whether current or closed that rarely peek above parapet of whisky consciousness. Far from being bad whiskies, these distilleries are often the unsung heroes providing staunch characteristics for blends and going about their business in a non-bravado fashion, free from marketing spin and fancy packaging. 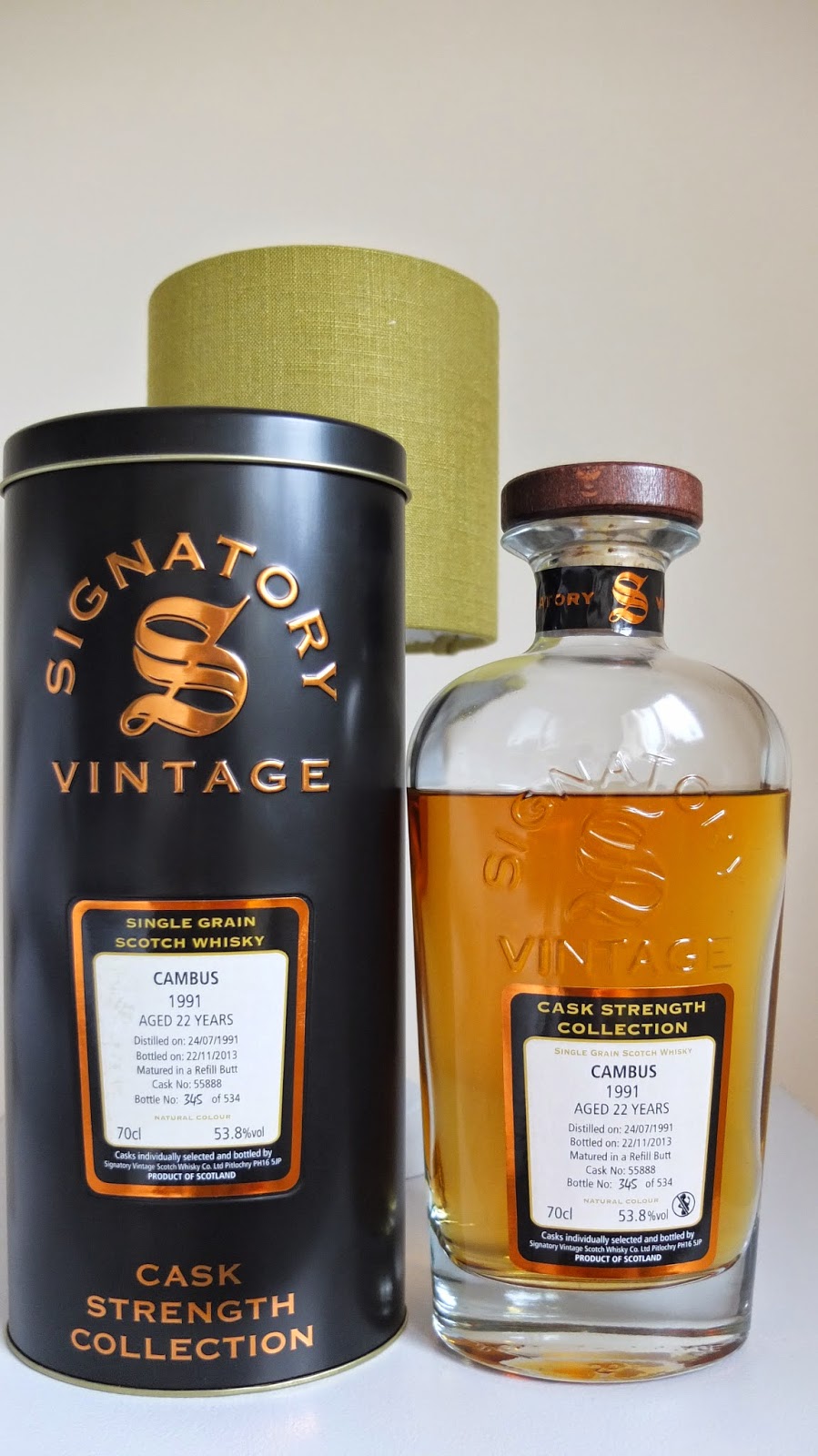 We’re seeing a new trend nowadays with corporations looking at their whiskies distilleries and shifting the PR spotlight to previously dark areas. Craigellachie (a lovely whisky) is releasing a range of 13, 17 and 23 whiskies. A welcome move albeit it the 23 year old at £330 is detached from reality. Such a move brings new appreciation and opens up new aged stock to the market.

Cambus was a grain distillery and it provided the backbone for many blends. Closed in 1993 it still stands in some form today, as a drive through the village confirmed recently. The bonded warehouses line up along the roadside as you drive into Cambus itself. Behind their blackened shape may exist the remnants of the distillery; next time I should pull over and go for a walk.

This specific release was bottled by Signatory for The Whisky Exchange (TWE). Say what you like about TWE, yes some of the prices they ask for their older/more unusual bottles do come at a premium however they do know how to pick a good cask of whisky. I’ve enjoyed a couple of their selections over the years that are attractively priced and score highly on the bang for your buck scale. As I write this piece the cask is not available online, but do check out TWE as these things tend to fluctuate and it may appear again. Maybe word has gotten out? Now we’re overdue my tasting impressions. 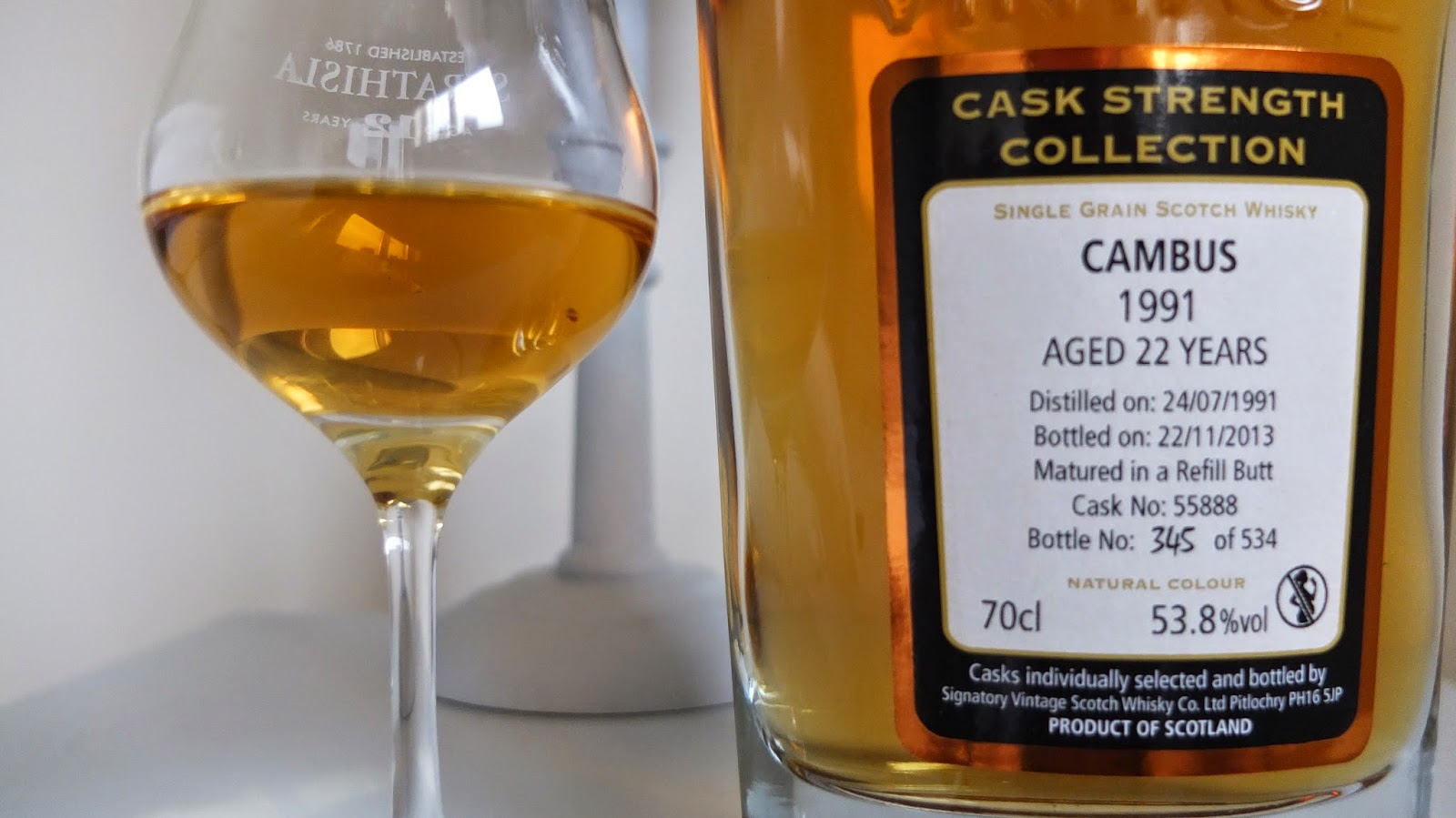 Distillery: Cambus
Distilled: 24/7/91
Bottled: 22/11/13 (22 years old)
Strength: 53.8%
Cask: refill butt, number 55888
Additional: natural colouring and I’d presume un-chill filtered given the contents floating in my drams. I prefer this although I suspect its the very tight-fitting cork.
Price: Exclusively available from the Whisky Exchange for £60.26 prior to selling out

Nose: crushed coconut that most distinctive of grain characteristics. Fresh vanilla and then we’re left to ponder the influence of the butt here which forms a soft undercurrent of jasmine, basil, marzipan, worn leather and noticeable floral notes with the addition of water. A fresh creaminess and vibrancy that hints at key lime pie. At the end a subtle touch of spice; cracked black pepper.

Taste: nice biscuits which for those unaware is a classic rectangular thin biscuit with coconut flavouring. During the long finish does the sherry influence come to the surface but with water it is propelled onto the palate much earlier. A nuttiness is evident with toasted oats, granola and warm caramel.

This Cambus is a very playful and interesting malt to dissect in the glass. Each time I find something new. It’s a restrained chap, quite content to do its own thing without attracting much attention. A perfect whisky to serve up as a talking piece.

Watch out as there could be another Cambus review later this year with the Scotch Malt Whisky Society bottling G8.4 recently, which was impressive on my initial tasting.