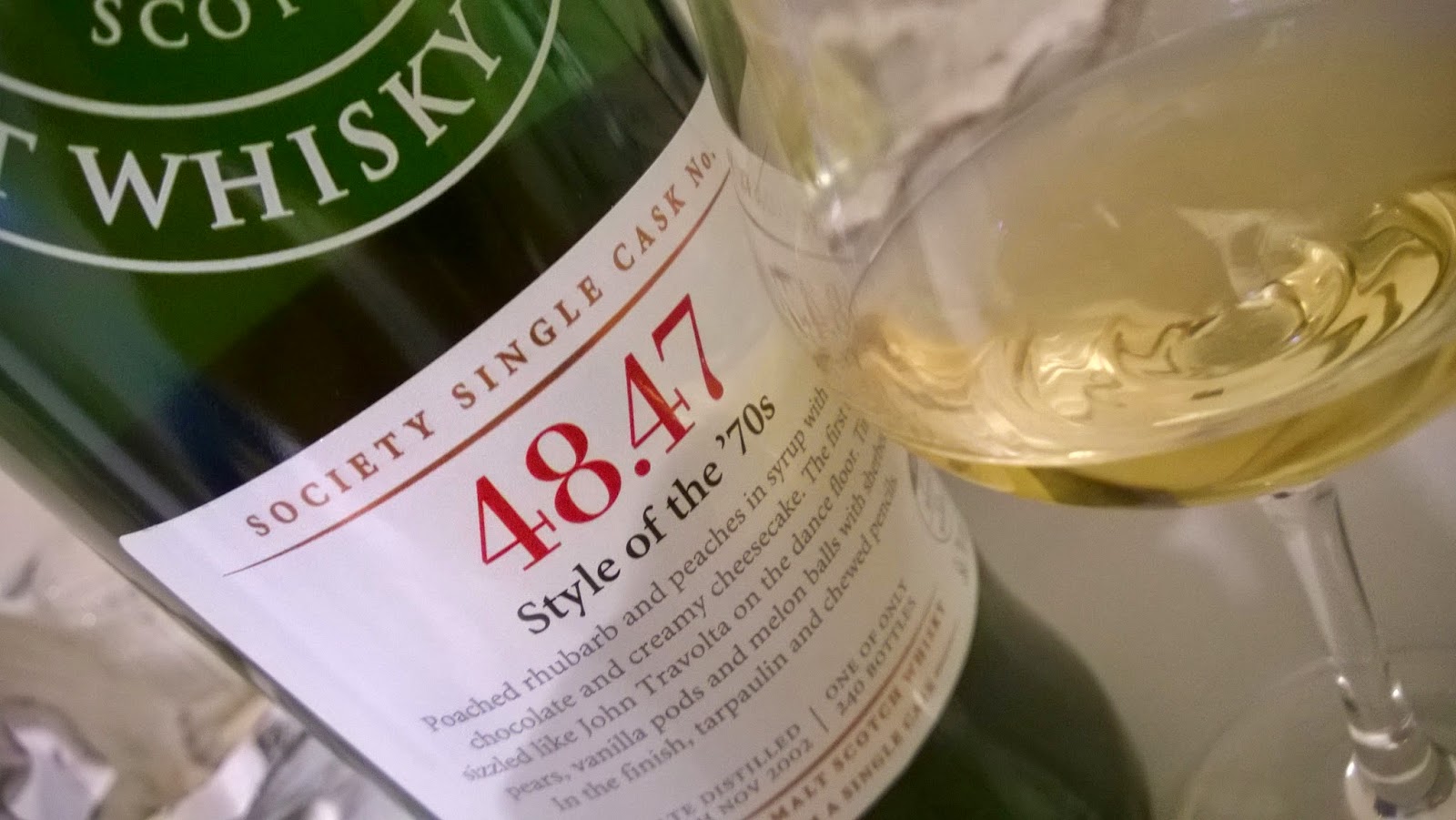 Since joining the Scotch Malt Whisky Society I’ve bought a dozen or so bottles but arguably not as many as I should have. I struggle somewhat to keep up with the Cadenhead batch releases that number around 5 or 6 in total for the year. Double that and you have the average monthly outturn for the SMWS.

Each instalment is constructed around a theme and the releases are plugged efficiently into this dynamic; opening up members and onlookers to the range of possibilities offered by a dram. This bottle comes from the November 2014 outturn and the theme for this month is ‘dare to share’ or pairing up whiskies with food and trying something outside of your usual comfort zone.
That’s the theme anyway and the problem with the monthly schedule is they tend to blend into one another slipping away from consciousness within weeks as well as the general cost. Casting back over 2014 the only themes that spring to mind are the Clans and a focus on grain whisky – ideally we could have had more grain whiskies released during the remainder of 2014 to continue this appreciation. 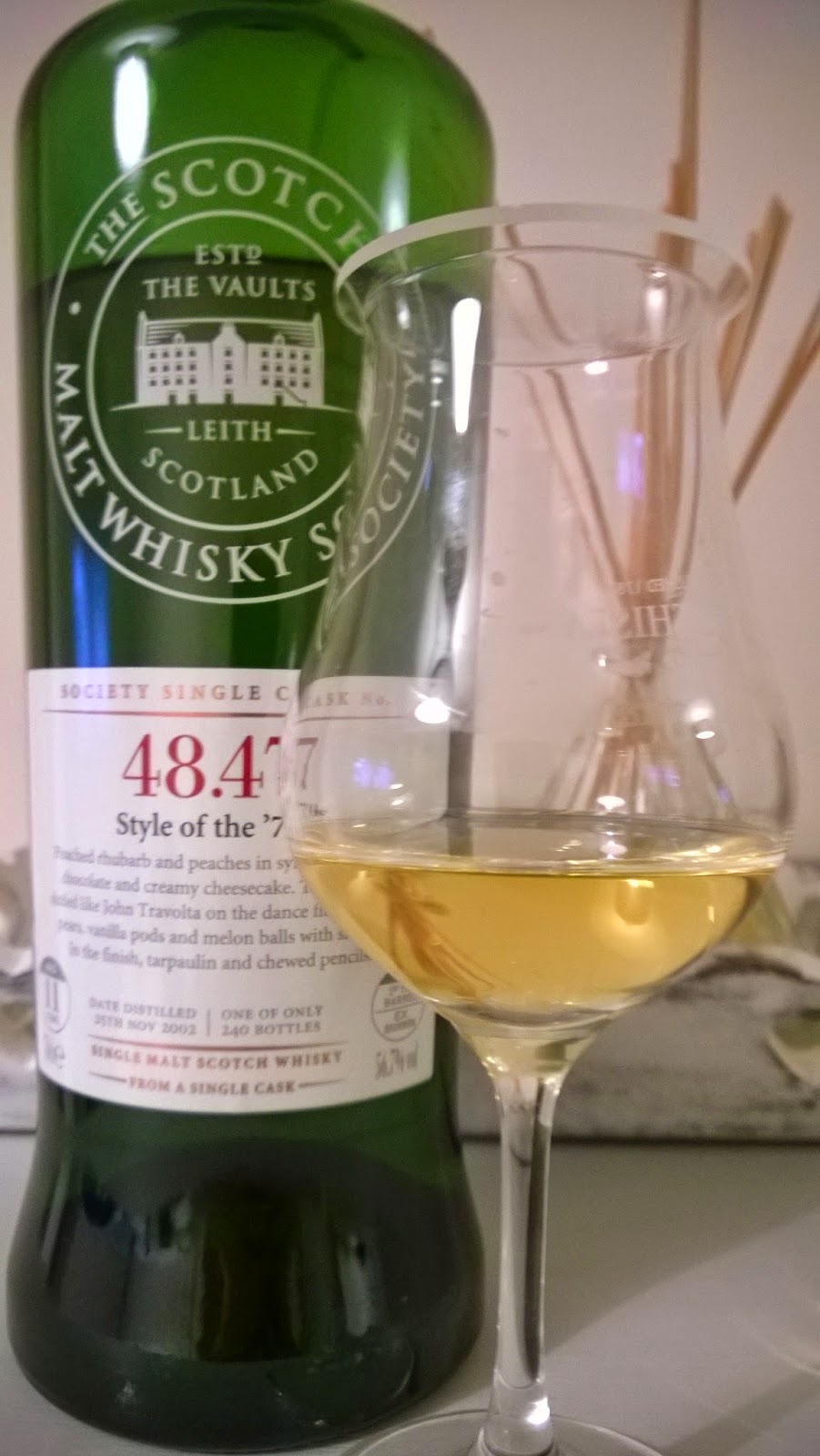 For this review the SMWS Tasting Panel want us to head back to the 1970’s. My dedication is admirable having wheeled out my chopper bike and flares to get into character after polishing off a chicken Kiev followed by a Black Forest gateau. The whisky itself comes from a rarely seen distillery highly prized by blenders.

Balmenach distillery was mothballed in the 1990’s before Inver House Distillers purchased this Speyside enigma in 1997. Since the takeover we’ve yet to see an official release from the distillery apart from the gin produced on site. Instead it’s down to the independent bottlers so provide an insight into Balmenach today. So a generous gulp of water later and we’re all set.
Distillery: Balmenach
Distilled: 25th November 2002
Bottled: 2013 (11 years old)
Strength: 56.7%
Edition of: 240 bottles (this had sold out online so you may find a bottle at a SMWS venue)
Price: £42.80 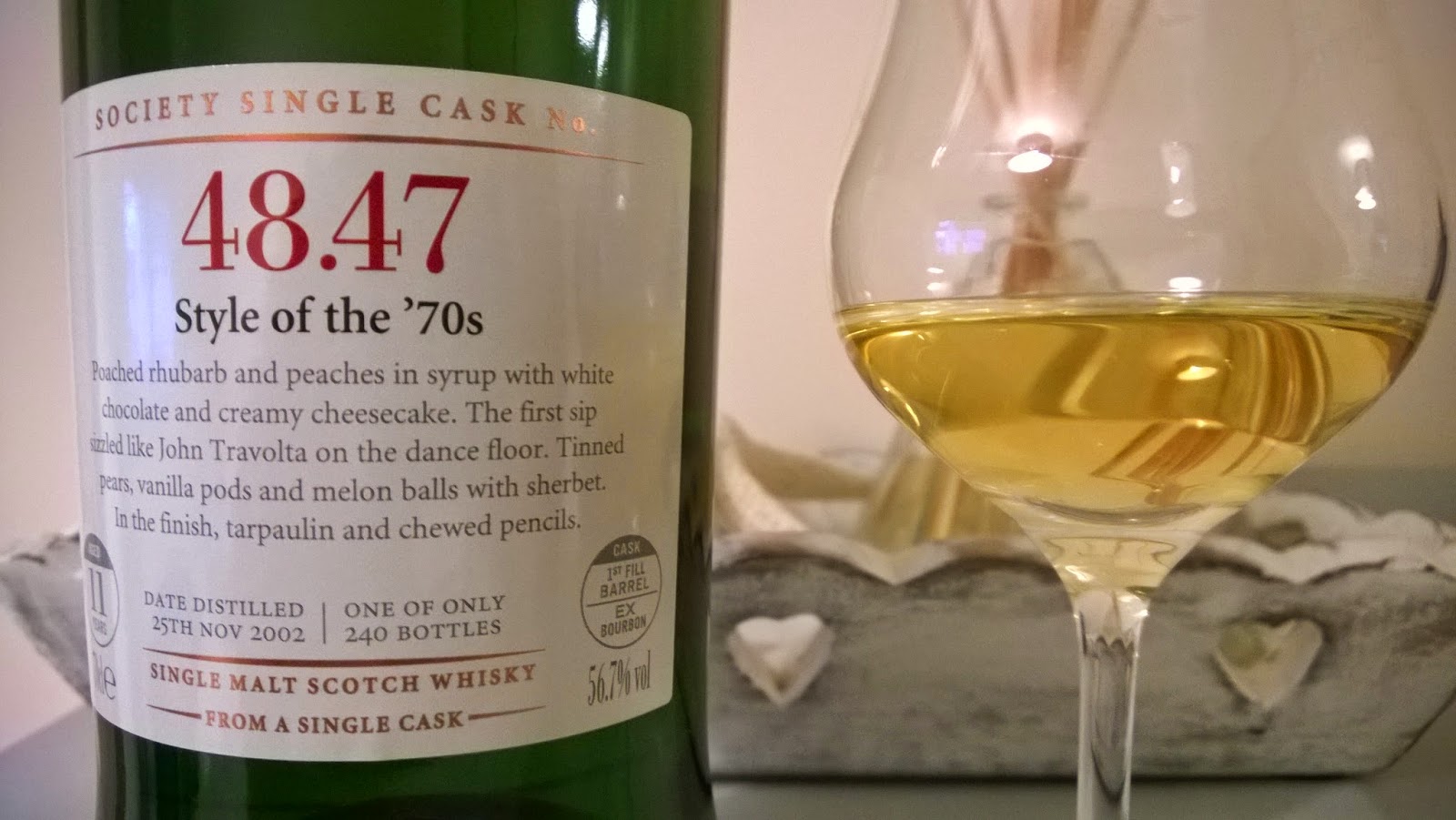 Colour: a lemon reduction
Nose: Stern cooking apples,  the sweetness of coconut ice and a minty touch on the fringes. Certainly a young, spirited wisp of a fella. The addition of water and more time brings out a buttery characteristic, almost milk biscuits in its loveliness and softens those cooking apples that become more plump and juicy.
Taste: without water the alcohol does try to hamper your enjoyment. Even without a splash, you can tell the bourbon cask influence; sweet creamy vanilla and balsa wood throughout the plate and finish. The rich sweetness reminds me of Canadian Ice Wine to a certain degree. With water we’re in the 70’s with home made apple pie and vanilla custard; a comfort dram.
CategoriesUncategorised

We’re back on Islay with the consistently underachieving Bowmore distillery with a release via the Scotch Malt Whisky Society. Almost every month without omission the..

Part of the appeal of the Scotch Malt Whisky Society bottling programme is the focus on rarely seen distilleries that often produce for blends. These..