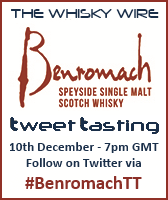 Time is a precious commodity and no more so than in the whisky realm. Whether it’s waiting patiently for the maturation of a barrel, allowing a dram to settle and breathe in the glass, or just taking that moment to relax; time is always on the menu.
Just where is he going this time I hear you ask? Well, recently I took part in the Benromach Tweet Tasting event organised through the Whisky Wire. I’ve been quite fortunate throughout 2014 to be selected for these evening online jaunts on an ad hoc basis. Not every application is successful, but in terms of broadening my knowledge and appreciation they represent an excellent virtual classroom. That aside I’m reminded of my only visit to Benromach in February 2012, which is already almost 3 years ago. This is a startling revelation upon reflection of this lovely Speyside distillery owned by Gordon & MacPhail; how the years have flown by.
Benromach distillery is one of the smallest distilleries in Speyside and under the guidance of its current owners has enjoyed increasing popularity at home and abroad since reopening in 1998. Last year further investment was announced to effectively double production and the opening of 2 new warehouses earlier this year. This growth is symptomatic of the good times in a buoyant industry but often we overlook the improving quality of a distillery that results in such added investment. The Benromach’s I’ve had whilst visiting the distillery and since have always been of a decent standard. They’ve always been interested in trying different strains of barley, peat levels, organic heritage etc. to keep things interesting. I’d also highlight in an era of increasingly expensive whisky, Benromach manage to keep their pricing more grounded then other distilleries; the 30 year for example retails for just over £200.
This tweet tasting event was held to dissect the new 100% Proof release along with the staple 10 year old, Organic and Peat Smoke expressions. So without further ado let’s commence with the vertical tasting. 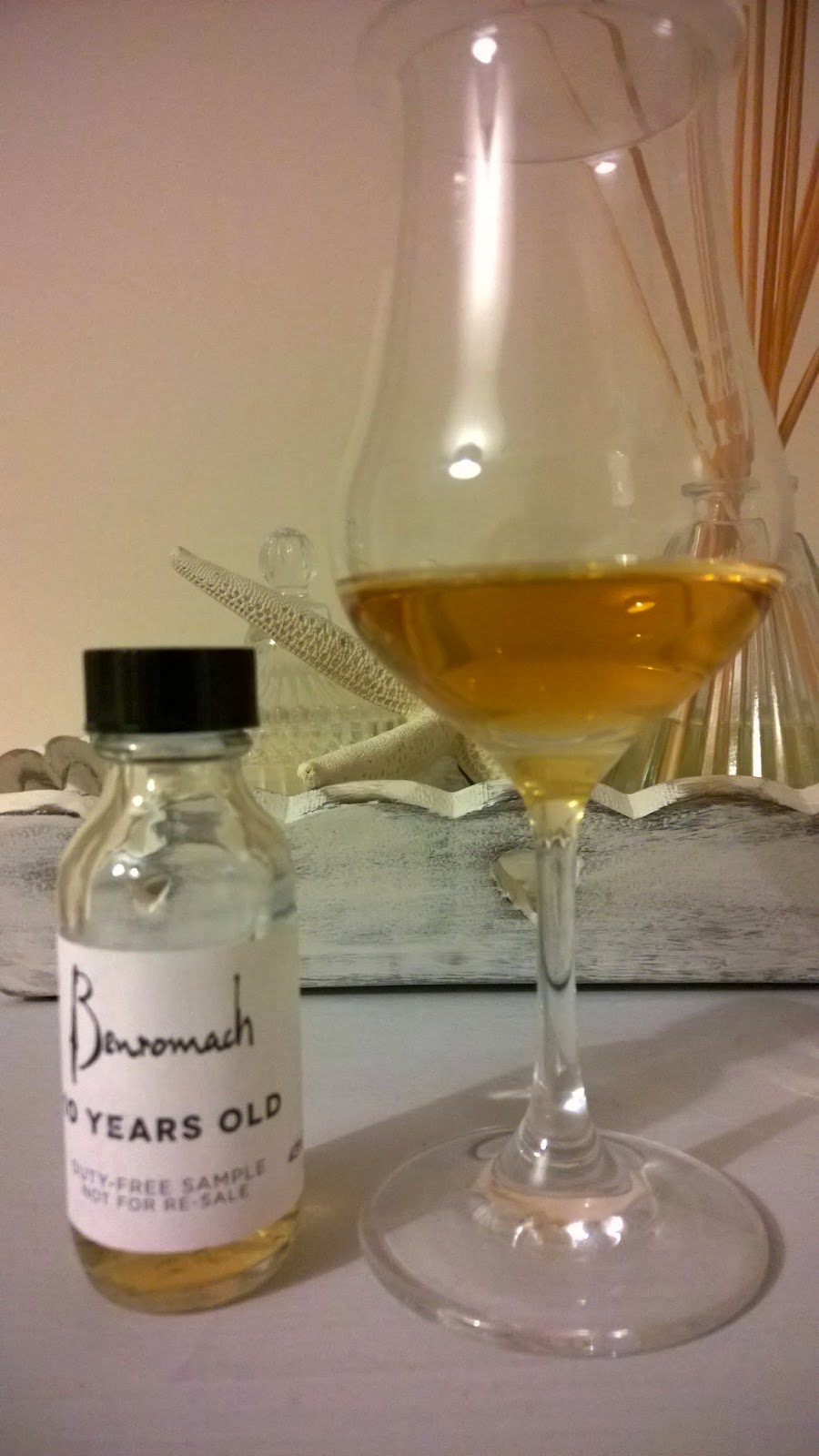 Nose: a wave of vanilla arrives before mixing it up with ginger snaps, freshly baked meringue and characteristic layers of fruit loaf. There is a slight smoky underpinning element here, perhaps that’s just my senses but a sprinkling of all-spice for sure. A playful, if limited nose.

Taste: a handful of barley just like you’ll be offered on a distillery tour, more wood and upping the vanilla factor. The sherry influence is subtle providing more ginger and the spicy notes that continue from the nose.

A solid enough dram, if I was being critical then an extended period of maturation, a slightly higher strength or more sherry emphasis can only enhance the experience. This sentiment takes us nicely onto the next sample. 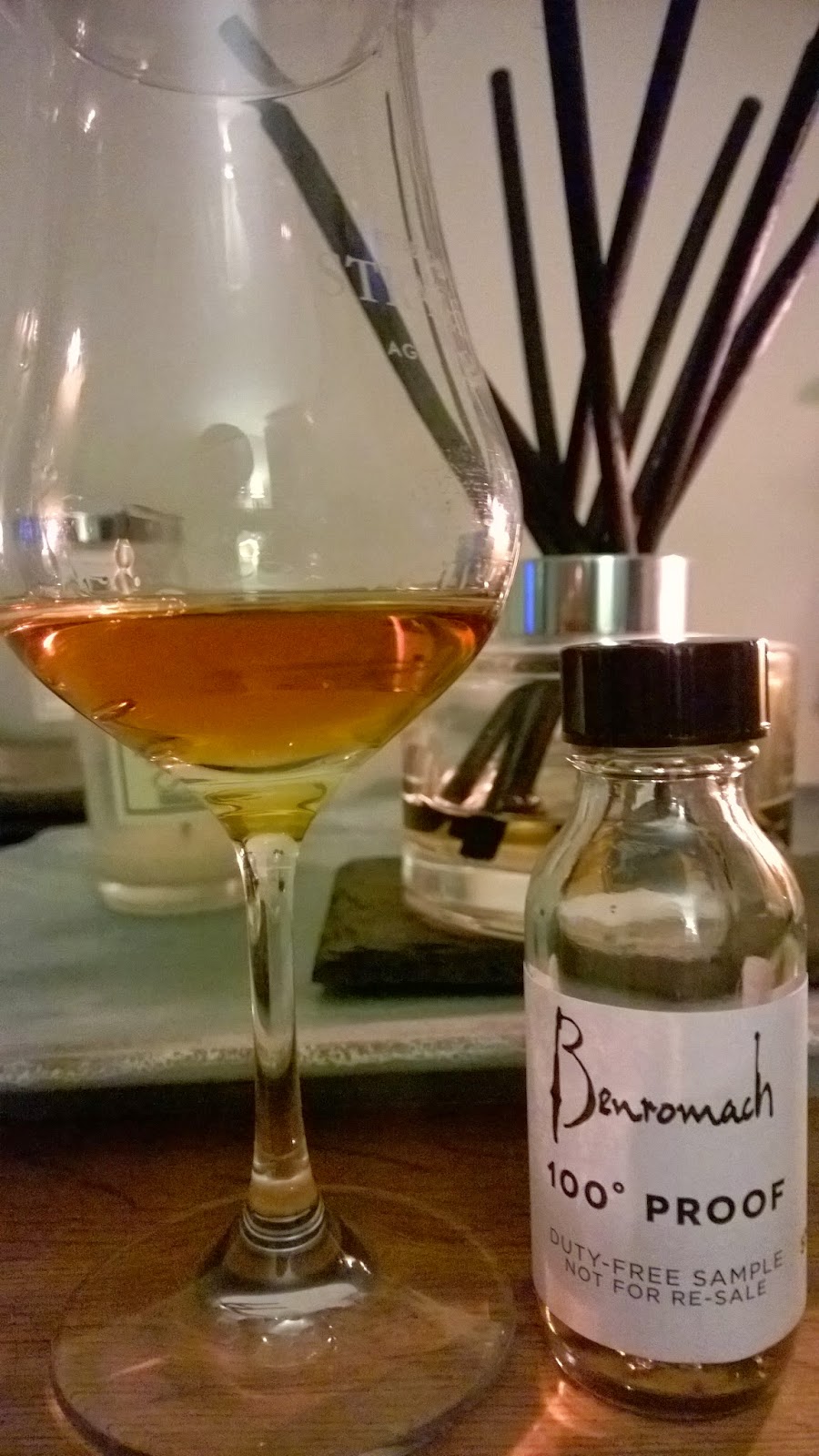 Nose: ah, the restrained sweetness of dried oranges, freshly cracked black pepper, homemade tablet, cinnamon and its taking me back to mulled wine. More ginger and cardamom pods with that smoky edge returning once again.

Taste: that smokes moves into the dram adding depth, the sweetness and stickiness of treacle tart with buttery pastry. All those spices once more reprising their roles, dark chocolate, coconut, vanilla fudge and heather honey all combine.

This offers more bang-for-your-buck than the staple 10 year old. A little water does add a new dimension and it leaves the traditional decade cousin standing still as it rampages ahead on all fronts. 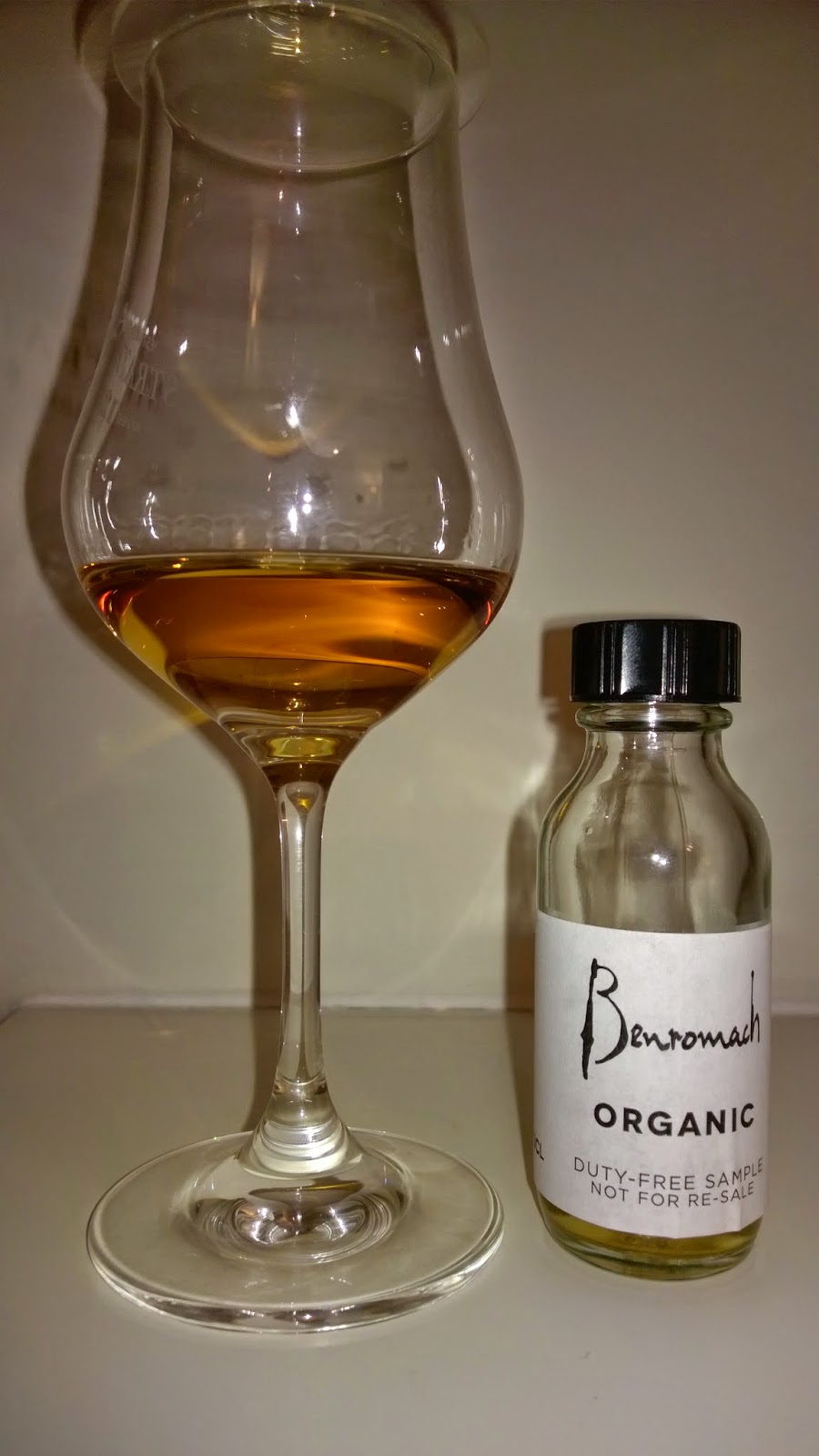 Nose: more orchard meadow than we’ve seen in anything previously from Benromach. The freshness of elderflower, pineapple, apple peel melting into apple strudel. Tree resin of all things with that sticky quality as well rounding off with crushed nuts.

Taste: a strong wood influence here with almonds, polished oak, caramel and buttered toast explaining the oily characteristic. A little marmalade tangy influence and again that touch of smoke that seems to persist with Benromach.

A solid if unspectacular dram. I’m always intrigued by the organic slant having recently tasted the Springbank ‘Green’ release that was similar in many respects – inoffensive but lacking the real complexity you’d like to see in a dram. Perhaps this all goes back to the high yield barley strains distilleries use nowadays, the movement away from coal fired stills and worm tubs. So far based on my experiences these organic examples just lack that extra dimension – given time an experimentation they’ll achieve more in the coming years. 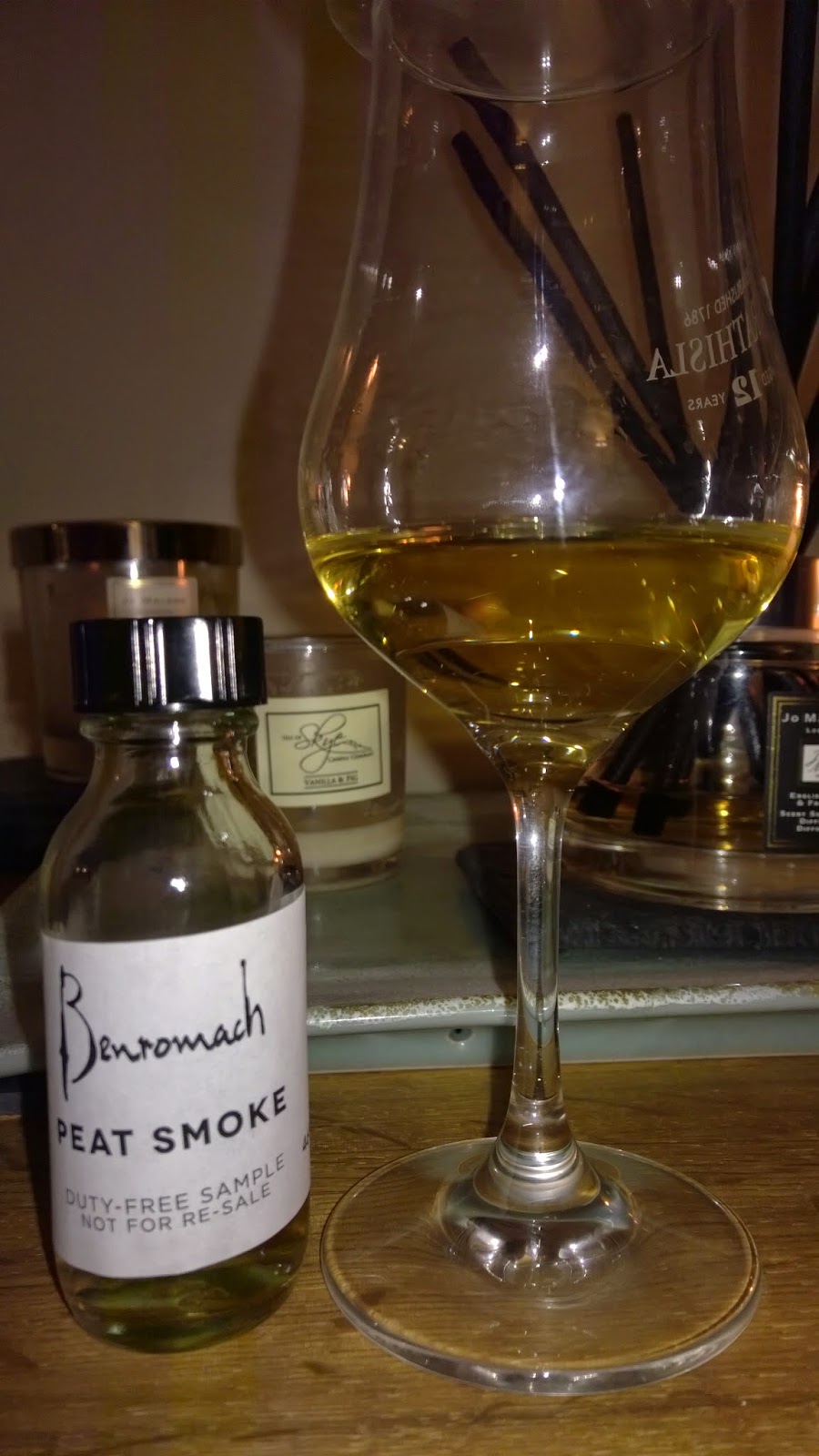 Benromach Peat Smoke
Age: distilled 2005, bottled 2014
Strength: 46% ABV
Price: £38
Additional: peated malt at 35ppm from what I read elsewhere although during the tasting 67ppm was quoted. Produced in small batches.

Nose: before Islay dominated the peat landscape, malts from the mainland were traditionally peated and this example shows why. Initially its Jakemans’ menthol sweets and Pledge furniture polish but the fizz is taking me back to old fashioned lemonade and of course peat; a real vibrant freshness.

Taste: not the huge hit of peat and being honest as always it’s all over rather too quickly on the palate. Another attempt if you don’t mind. Now we’re more attuned a rather gentle peat experience. Melted butter, highland heather, a little saltiness although I should actually say Hebridean sea salt peat smoked – a lovely product if you can track it down. Limited again, lacking the complexity of some Islay examples say Caol Ila but there’s a place for this peated experience. A nice initial foray for someone just commencing their first steps into the peated bog experience.

In summary, Benromach might be a small distillery but it is producing some solid and at later ages spectacular whiskies. Apart from the whisky experience itself the refreshing aspects overall are the pricing, openness with details about the ages, cask ratios etc. and attention to detail.