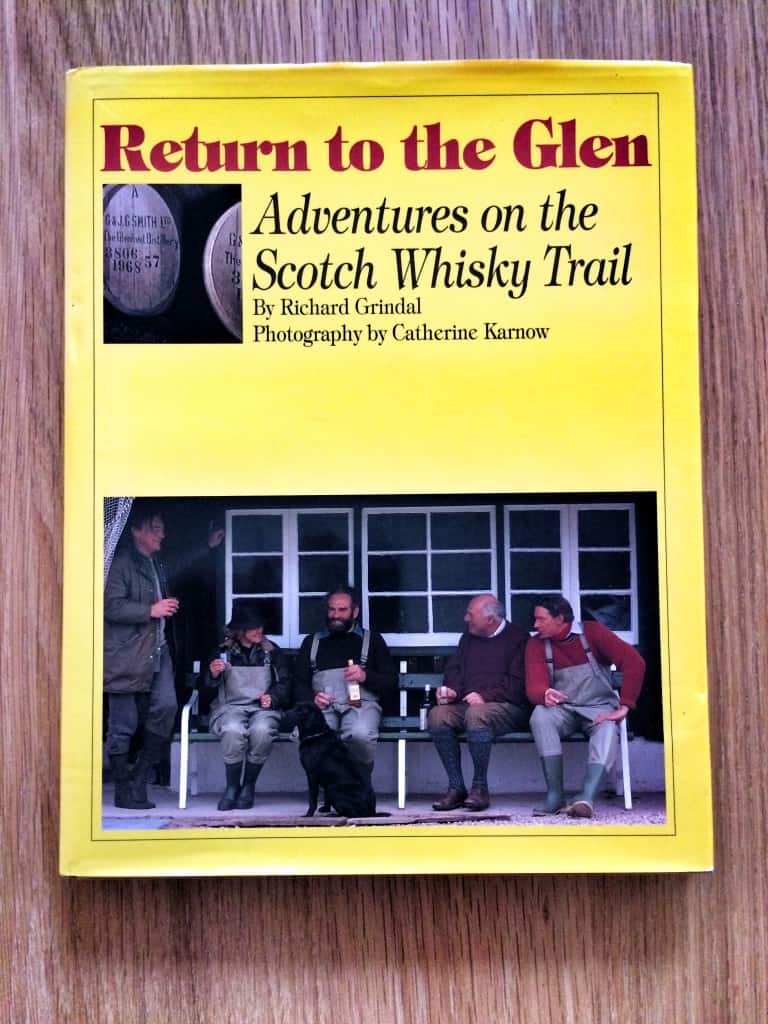 There are many joys to be found in pottering around a second-hand bookstore. One of them comes when you stumble across old gems, the kind of book that provides a snapshot of another era. In fact, the kind of book that you wouldn’t find on the shelves of any ordinary bookstore. Given that many drinks books these days tend to be retelling the basics, suggesting what to drink, or are merely sedatives in disguise, it’s hard to discover a whisky book that is about something else entirely: the very soul of aqua vitae.

When I was on holiday recently I stumbled across Return to the Glen: Adventures on the Scotch Whisky Trail. The photos alone were enough to convince me to buy it. Published in 1981, Return to the Glen was written by Richard Grindal. He was once a consultant to the Scotch Whisky Association after serving as executive director for some twenty years. He was also a writer of detective fiction, under the name of Richard Grayson. The pictures were taken by an internationally renowned photographer, Catherine Karnow, who was based in New York City – and for me, it’s the photos especially that make the book such a delight to open up. 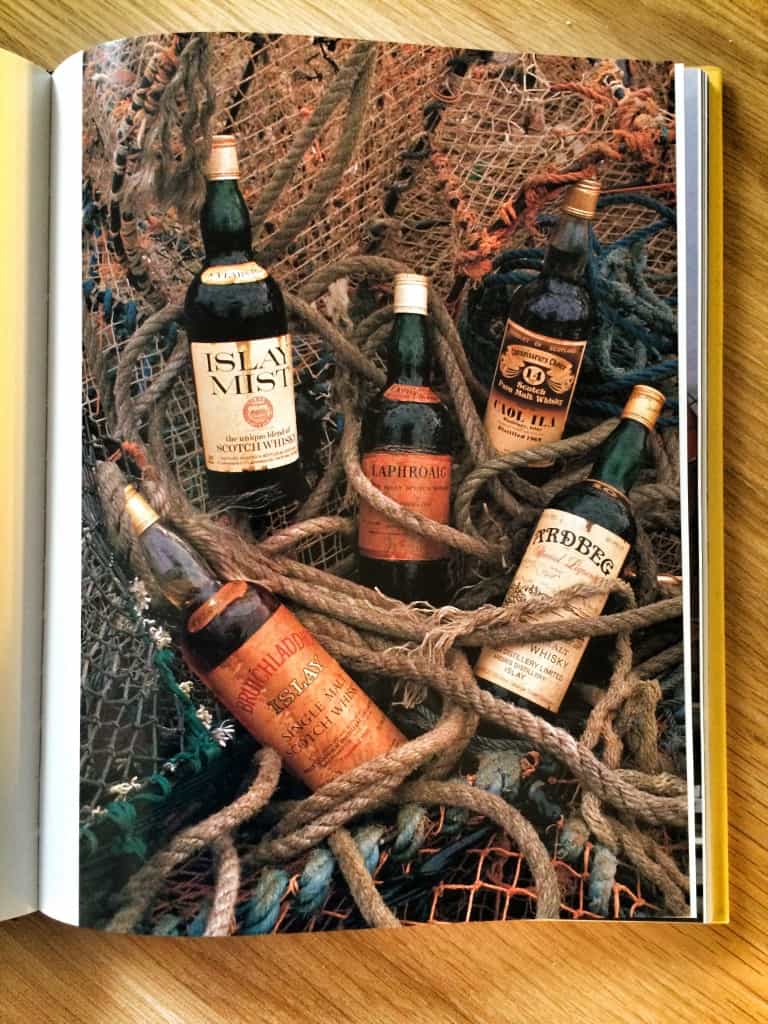 So what’s the book about? Well whisky I suppose is a good starting point. But I’m not sure the book is so much about whisky per se as about the people who made it, and the locations involved. Terroir, you might say, before the word became fashionable. Put all the various chapters together and it’s like one of those magic eye puzzles in which something leaps from the page. It’s about the soul of whisky: heritage, landscape, characters. There’s an understated passion.

It’s broken up into the basics: the anatomy of Scotch, where whisky comes from, what the industry is like now (or rather the 80s), then takes a trip around some of the locations involved, from Islay to Speyside, before finishing off with various recipes. It’s also about the people in those communities, as well as the kind of people who actually drink it today, which marks it out as rather different. Refusing to be self-indulgent, the book acknowledges the sisterhoods and brotherhoods of whisky drinkers who live in the real world. 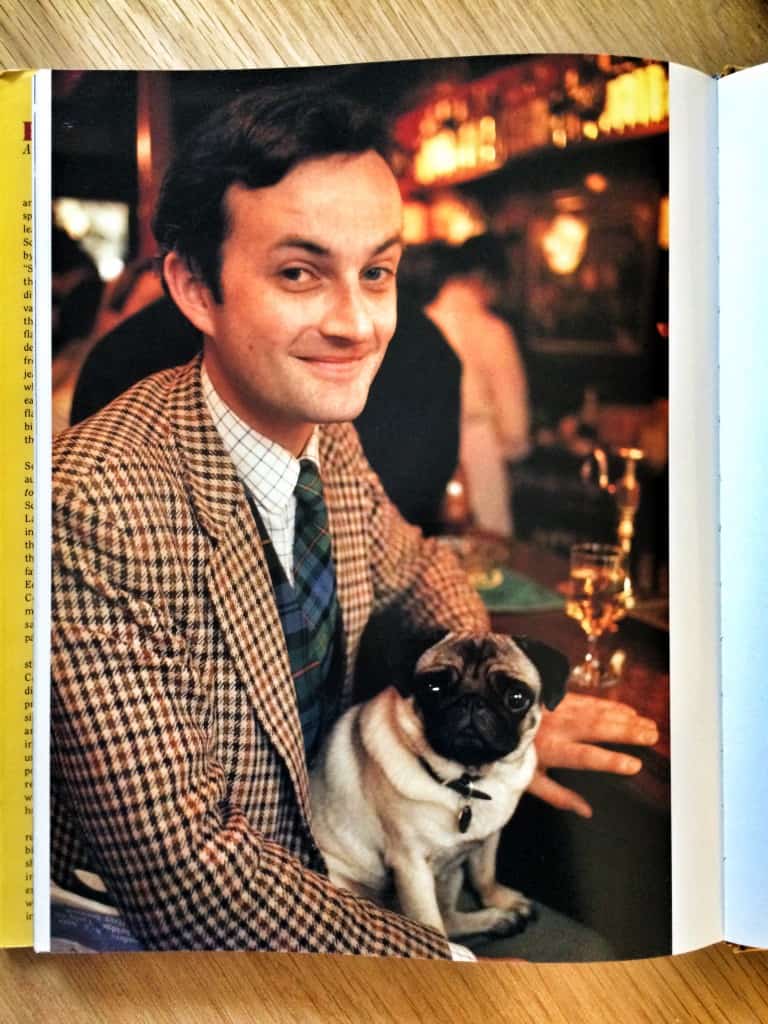 Grindal writes in an informative, almost autobiographical manner. It’s not just whisky, but whisky and people as seen through his eyes. Unlike one book that will go unmentioned, it isn’t powered by ego, wherein the writer is telling you what you should be thinking and bringing a false agenda to the table in order to sell more copies. This is companionable stuff. It’s a casual, bar-room conversation. It’s encouraging you, the reader, to go on a journey with him.

Whisky is introduced as through a natter with a friend, and instead of blandly describing locations, Grindal evokes his experiences. The difference is that you start to understand how the landscape functions. It’s almost a psychogeographic portrait of whisky.

On his arrival to Islay: “The pilot circled the airfield suspiciously, making certain that none of the grazing sheep below him hand wandered on to the single runway. One of the duties of Angus, who worked at the airfield, was to go out in a pick-up truck a few minutes before the daily plane was due to arrive and shepherd straying sheep to safety. But on Islay, time has a good deal less urgency than the Spaniard’s mañana…” 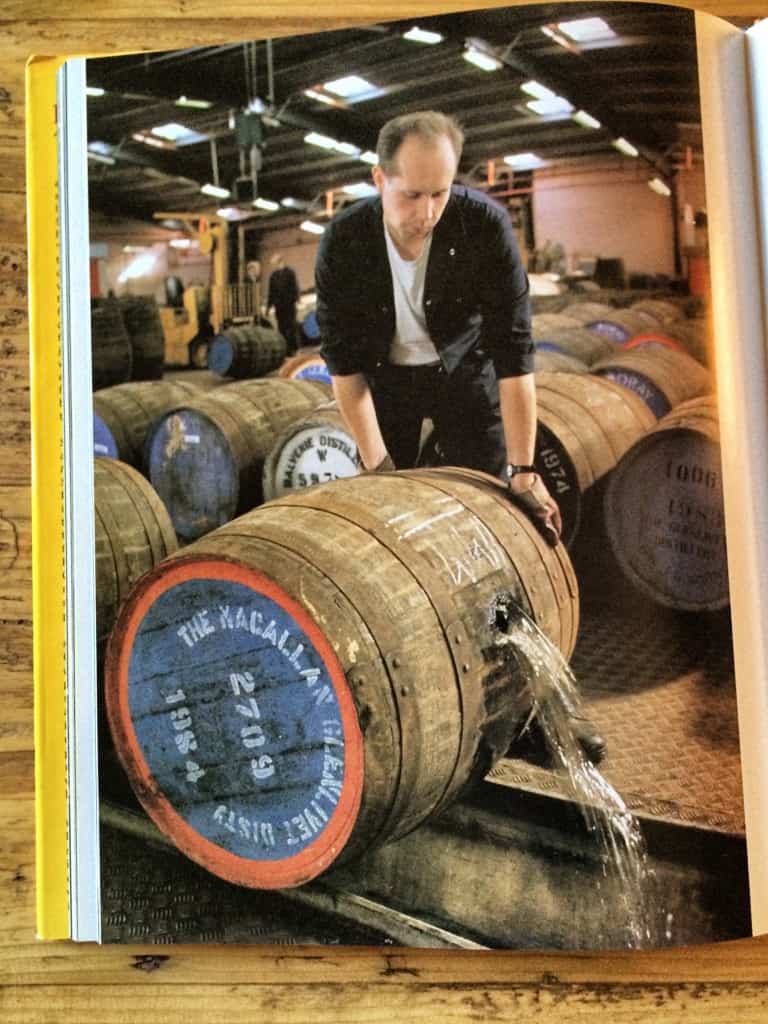 His time on Islay is a snapshot of how things used to be. He meets Bessie Williamson, “the only woman at that time to own a distillery in Scotland”, and who tours him around Laphroaig as well as the rest of the island. We get to learn her thoughts on the powers of local water, and she introduces the effects of peat. From Islay to Speyside, and tales of illicit distilling to modern distilling, and more of the processes are described. Note that the book isn’t front-loaded with methods of distillation, which may bore the newcomer, but are instead peppered throughout the book in a more digestible manner. It speaks volumes of Grindal’s confidence in writing. Among other distilleries and characters, we get to see snapshots of Macallan, and the early impact of advertising – such as Allan Shiach, one-time entertainment man in the US, who came to inject his expertise and enthusiasm in building the Macallan brand. What makes it all the more potent is to be reading this book 30 years later, where that branding has taken on a whole new level of success.

It’s only towards the end of Return to the Glen that we get more of a detailed history of Scotch. It’s about the drinkers, too, and how it’s drunk – be that at golfing events or simply in a bar. And even in Glasgow, we get history and context: the decline of shipbuilding, and the rise of whisky companies. Finally Grindal ends with whisky cocktails and recipes – things that the reader can then go away and try for herself. 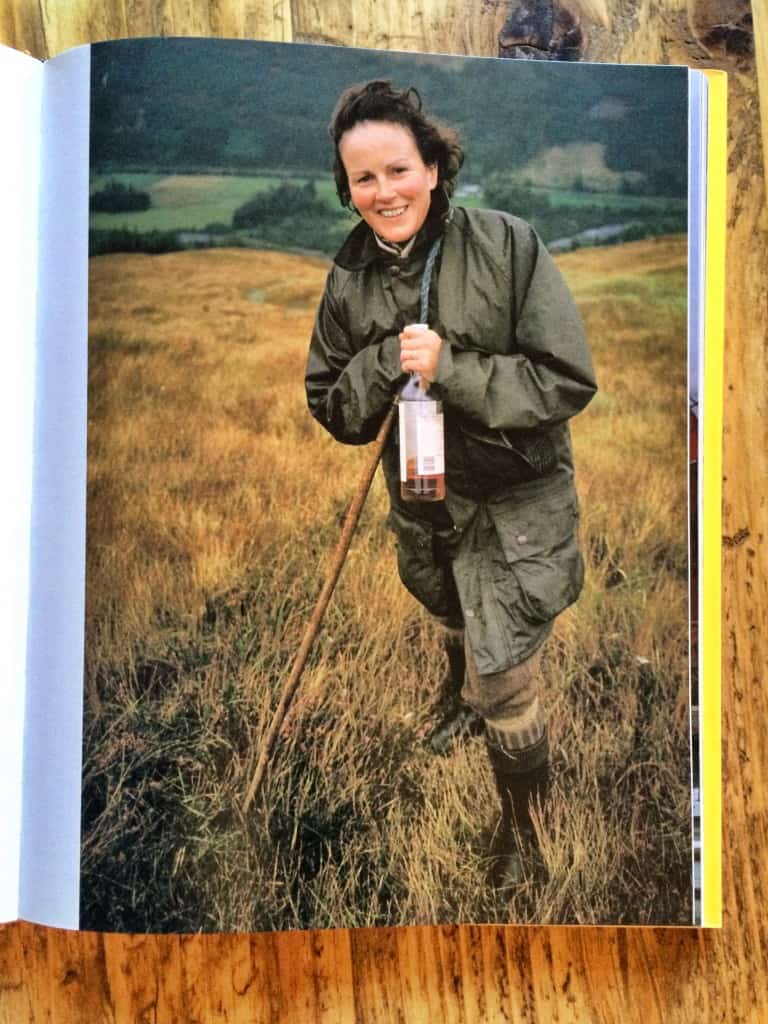 It’s curious how all the ingredients are in a totally different order to most whisky books – and yet it works really well. It’s a different, more potent blend I think. It’s partly a nostalgia trip, for a time that I certainly never knew. You get to see the world as single malts began to rise up in terms of their marketing and positioning, though even then it was clearly still speaking to a minority of drinkers. It’s also interesting to see how women were positioned as equals to men; it’s almost a given women were the minority with regards to making the stuff, but in Grindal’s book whisky is shown as a drink that appears to women and men, young(ish) and old, in equal measures. It’s a hugely inclusive and generous book.

What I loved about Return to the Glen most is that it reminds me why I love Scotch whisky. Now, I love world whiskies and have long been a champion of them. But there’s just something rather special about Scotch whisky. An exceptionally long history, with many tales involved. The landscape of Scotland, rolling hills, running streams. Something about when Scotch whisky lovers come together to enjoy a dram, and there’s a moment of shared appreciation through the ages. Hard to really put my finger on precisely what it is, I guess, but Return to the Glen does something to stir a Scotch-drinker’s soul. This book really is a delight to read – you could probably find a copy through online second-hand book dealers.

A letter from Alvin Rosenbaum

A couple of years later and I received a very interesting email from Alvin Rosenbaum, Senior Research Scholar in the School of Business at the George Washington University. He had involvement in the book. Here’s what he had to say:

Your generous review of Return to the Glen: Adventures on the Scotch Whisky Trail (just now discovered by me) was a product of serious collaboration among my company (actually, me), Joseph E. Seagram & Sons (actually, Seagram Executive VP, Stephen Herbits), Dick Grindal (found through a London book agent) and my photographer friend, Catherine Karnow., who then lived in Washington, DC.

Return to the Glen was my second book for Seagram, the first being Blithe Spirits: A Toast to the Cocktail. Herbits was a strategist who had come from Washington to Seagram as Edgar Bronfman Sr policy advisor after stints in the Ford White House and (later, on a leave of absence from Seagram) as Chief of Staff to DOD Secretary Dick Cheney and eventually as mentor to Edgar, Jr. While not Herbits’ doing, Edgar Jr. destroyed Seagram (According to Jr.’s uncle, Charles Bronfman, “the demise of Seagram ..was a disaster, it is a disaster, it will be a disaster… It was a family tragedy.”
Herbits contracted with Alvin Rosenbaum Projects Inc to produce a book on Scotch citing the steep decline in whisky sales in the US, drunk “only by white men in New York over 50” Chivas drunk only by African-American men over 50 in the rest of the country,” according to another Seagram executive. While Chivas (Seagram’s top shelf blended brand)  a brand leader (“The most expensive $13 gift you can find”), single malts were nearly unknown except in a few specialty bars in NY and London, with The Glenlivet (also a Seagram distillery) and, perhaps, Grant’s Glenfiddich, available in high-end retail stores.
My mandate from Seagram was to not identify Seagram in any specific way. “We’re after market size, not market share,” was their mantra. Learning from our earlier book on cocktails, the Seagram challenge was to show young and active men and women drinking single malts in Scottish surroundings that would encourage Americans to travel to distilleries and their environs for a “wee dram” as they moved from place to place around the country to fish for salmon, play golf and stay in country inns.
For me, finding an author was a trip to the UK in February 1988 to search through many literary agents to identify and engage Richard Grindal, who wrote the text for a very generous fee without royalties. As I remember, he wrote the text in 90 days and Catherine and I set out for Scotland in a rented Ford in May 1988. The book was published in 1989 (rather than 1981).
Catherine and I visited perhaps two dozen distilleries and after I returned to the US, Catherine remained for several more weeks of photography. It was her first book and her disciplined approach to her craft was impressive.
We typeset and designed the book in my studio back in Washington and I had it printed in Singapore, where quality and price beat any US printer. The books were delivered to a Baltimore warehouse where a fulfillment house, working from a list provided to me by Seagram, mailed 5000 copies to food and beverage managers, select bartenders, advertising executives, food critics and other influence leaders in the spirits industry. What followed is for others to discover but soon after, single malts were shipping to US distributors, Abercrombie & Kent introduced a Scotch Whisky Tour and a market was found for active young men and women began to drink single malts. Bourbon followed with small batch whiskey soon after.
I went on to develop tour routes for the National Park Service, based on Return to the Glen, and a decade later, to provide tourism development services in places off the beaten track in Africa, Europe, the Middle East, Latin America, Eurasia and SE Asia.