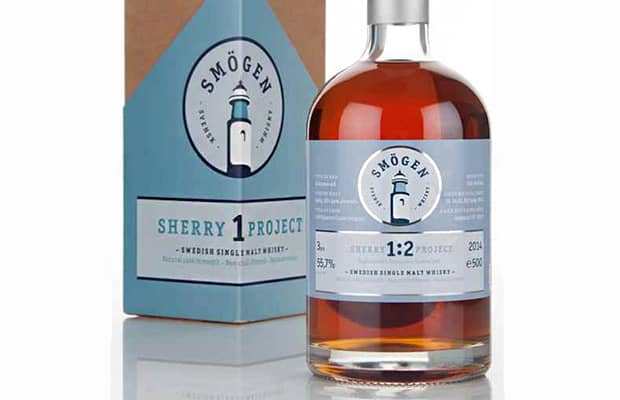 Smögen is a relatively new craft distillery based in Sweden. Well, I say new – it was founded in 2009, and made its first distillation in 2010. It’s the project of Pär Caldenby, who wanted to create a hand-crafted, smoky whisky in small batches. I really enjoyed an earlier release of Smögen Primör Svensk Single Malt Whisky. Having heard very little about this Swedish distillery, the quality and boldness of the product really surprised me.

So when I was asked if I’d like to try two samples of their new Sherry Project, I jumped at the chance. The releases were named Sherry Project 1:1 (distilled in June 2011) and Sherry Project 1:2 (distilled in July 2011). They use optic barley, peated to 50ppm. The spirit was curiously matured in European new oak quarter casks, which presumably accelerates the maturation – there’s a smaller surface area of wood to spirit in the smaller cask sizes; and new oak, as per bourbon, results in a huge wood influence. They then spent a few months in a Sherry butt. 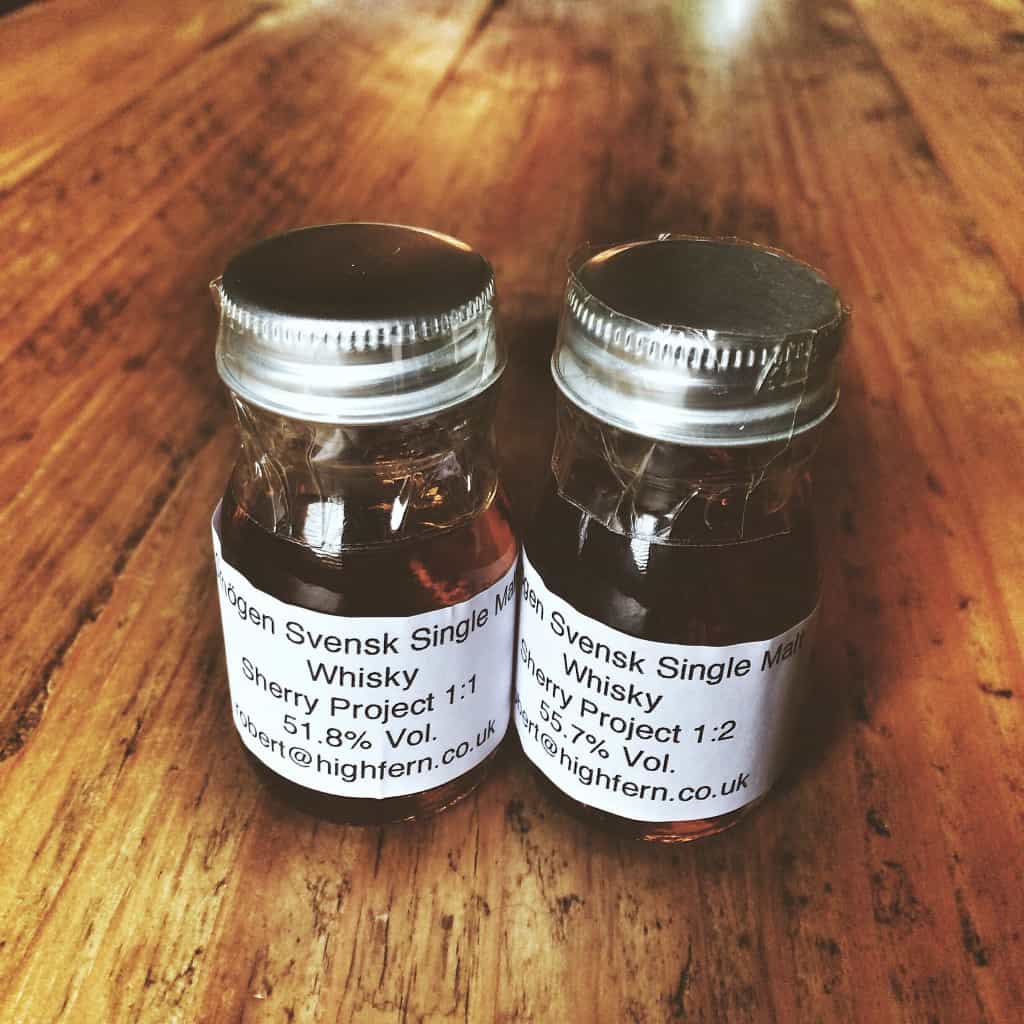 Colour: tawny, auburn. Not even close to what you’d normally associate with a whisky so young. On the nose: intense stuff. There’s an undertone of peat there, dark and ashy beneath layers of sweetness. Almost BBQ sauce sweet notes here: dark sugars and vinegar. Maybe even HP sauce. Soy sauce – so many sauces! Plums and dark currants. Must admit it’s not quite as harmonious as I’d like, but it’s very brash.

In the mouth: the nose follows through admirably (it matches): ashy peat, rather than sweet peat, props this up. Some of this feels as if it’s gone straight into new wood, as there are a few prickly wood tones poking through (at the time of writing, I’ve just checked the bottle labels an indeed some of this is new European oak quarter casks). Brine. Almost kippery. Quite a thick texture and the balance here is better than the nose. It does remind me of Octomore in some respects. I do think it’s okay, but I don’t love it.

Colour: almost an identical shade to its sister release. To get colours like this after three years! That’ll be the virgin oak. On the nose: no discernible peat here at first. Presumably a little older and quieter than the first. Quite a clean smell as a result, and surprising that you have to be patient with an ABV so high. There’s the touch of mustiness, which is remarkably for a three-year-old whisky. Freshly sandpapered wood. There come the fruits: dried apricots, raisins.

In the mouth: chock-full of taste. It’s hefty, but blunt fight between the sweet fruits, and the bitter wood note. The peat is still very distant now the wood has taken over. That peat has taken a back seat in this one. Cherries and blackcurrants, not so much dark fruits. Molasses. But a lot of tannins and lignins. I think this is too much wood for me.

Don’t get me wrong, these are very interesting whiskies. If you’re a fan of Bruichladdich Octomore and have money to spend, this may well be right up your street. But I suspect some whisky drinkers, especially will feel like these two Smögen whiskies are a bit like the school bullies coming to push their head down the toilet and rob them of their pocket-money – did I mention they cost about £100 a piece? That’s a lot to ask for some drinkers.

I think what I’m saying his this: Smögen is on its way to becoming a cool distillery renowned for fantastic and interesting whiskies. I’ll want to try as much of it as I can. But these two Sherry Project releases are just too blunt for my liking. And though the new oak quarter casks gives plenty of colour, it highlights for me the sensitivities around virgin oak and whisky.

Note: These samples were provided on behalf of Smögen, for which I’m very grateful. It would be great if I give only gushing praise for all whisky samples that come my way, but that wouldn’t be fair on you, dear reader.