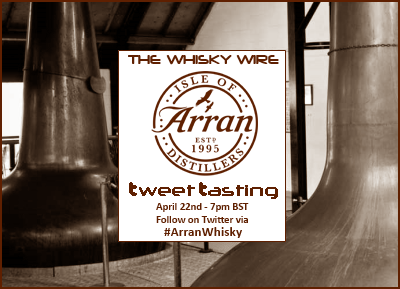 This is my first Tweet Tasting with the Whisky Wire of 2015 after taking a well-deserved break after the extremely frantic Christmas run in.
I’m very cautious when faced with Arran whisky after my repeated attempts to visit the distillery. The first attempt was hampered by poor weather conditions at home so for a second attempt the following year we reduced that risk by staying overnight near the port. Unfortunately the captain hit the pier with the ferry the next morning, so services were disrupted and we were unable to reach Arran in time for a tour. Defeated once again we turned around and went home. Thankfully the samples for this tasting event arrived safe and sound!
Arran does have its critics from a stream of releases in its early days and is often on the end of jokes from an online whisky forum I visit weekly. However even those old mud-slingers are able to nominate a couple of passable bottles, which is remarkable compared to whisky from Jura that represents the major source of their disdain.
For this Tweet Tasting I was looking forward to the vertical opportunity and to re-evaluate Arran whisky as it is today. Prior to this event the most enjoyable Arran was the original Bere barley release that was bottled a little prematurely I felt, but it was miles better than the disappointing Glasgow Whisky Club private cask sample I reviewed recently. The older Bere barley bottled in 2014 is sadly missing from this Tweet event however we have plenty of samples to see how Arran is progressing including the recent pinnacle of an 18 year old. 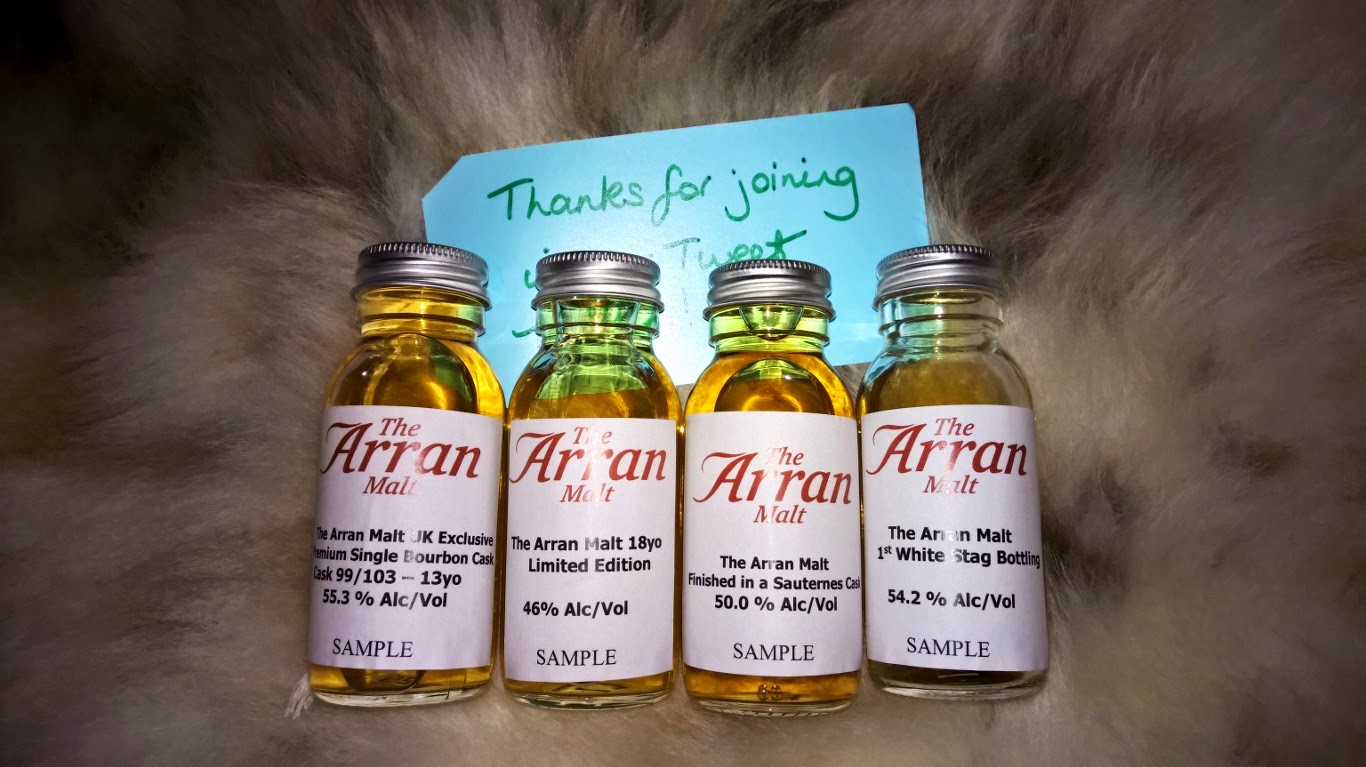 Arran Sauternes
Price: circa £37.99
Strength: 50% vol
Additional: matured in oak casks for 8 years this was finished in Bordeaux sweet wine casks for a further period of 9 months.

Taste: not as rich as the nose suggested. More honey and vanilla with lots of sweet characteristics; pancakes and golden syrup.

Nose: dessert wine and more sweetness emphasis with fruit pastilles, barley sugar and honey. A little twist in the characteristics with fresh sweetcorn, uncooked pastry (buttery note) and lemon sponge. Rounded off with a suggestion of walking through a field of daffodils.

Taste: a burst of freshness and white pepper, a little ash as well (most surprising) and it does respond well to water, as it is a little fiery at first. With water more cloves appear suggestive of the cask origins and spicy notes such as cinnamon.

Nose: well, this isn’t a full on sherry monster. Yeah it’s an influence but this is more luscious fruity notes including pineapple and the wild blackberry bushes the kind that you used to discover as a kid yet rarely see nowadays. More fond aromas with red liquorice, Highland heather and caramel waffles. The sherry note is a well worn leather bound diary come December.

Taste: that sherry-lite feeling continues from the nose onto the palate. Lots of fresh vanilla and honey including the sticky texture that coats the tongue. A touch of tobacco ash once again, walnuts and ginger cake.  Without water I’m finding the finish is more prolonged with black pepper and buttered toast so it is delicate – be careful with the water!

So there you have it and interesting snapshot of how Arran is today. I find these events fascinating to participate it and observe. Having the drams and taking part does make it interactive, but even if you don’t have say the Arran 18, you may have another whisky from the distillery in your stash.

Which to buy? Well, I found the 18 year old more layered and interesting. For a 100% matured sherry cask whisky it lacks many of the expected characteristics including its appearance. As I commented during the event; Arran seems to get better with age much like the Lowland distilleries such as Linlithgow.