With most of the UK whisky community it seems deciding to spend their Bank Holiday online trying to purchase the new Ardbeg release, I decided to visit a distillery. Unlike most of my previous voyages the destination offered no tour, tasting room, those familiar aromas or hive of activity. Instead this was a closed distillery that still exists today as residential accommodation.

Situated in Linlithgow in West Lothian, St Magdalene distillery closed in 1983 and was converted a few years later into residential accommodation. The Linlithgow skyline is dominated by the impressive palace ruins that you can see from the distillery, but it is the striking pagodas that capture my interest. These now enjoy protected C-list status and the remaining buildings being stone built will continue to attract whisky enthusiasts for generations to come.

In total there are 2 large sections of the distillery that stand today both are fairly similar except the initial block only offers a single pagoda.

Walking around these structures one cannot fail to be impressed and I drifted back to the recent 32 year old Cadenhead St Magdalene that I reviewed recently. For the record it was a sublime experience that put an end to the mocking of its output as canal water. It is glorious whisky nectar up there with the best that Rosebank has to offer.

Of course the distillery is near the Union canal and did utilise this as a water source. It’s also ideally situated in the midst of the central belt of Scotland, with road and rail transportation just a cask roll away. It is the accessibility of the site and the last whisky recession of the 1980’s that put paid to the distillery and attracted developers. The site itself does have some historical significance with the Knights Templar establishing a hospital for lepers a long, long, time ago. 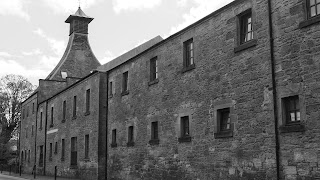 Any distillery closing is a sad situation including Jura and its this cycle of existence that we may have to become accustomed to once again if demand continues to fall. We’ve lost many distilleries to the bulldozers and sledgehammers of corporation progress and shareholder demands. As sad as it is visiting a relic such as St Magdalene today, I’m somewhat heartened to see the distillery being put to another use much like Caledonian distillery in Edinburgh.

Next time I visit, I may just take a wee miniature and sit back and raise a dram to this silent Lowland distillery; driver permitting of course. For those looking to visit St Magdalene today it is easily reached by car or even train with the station just across the road and Edinburgh just 15 minutes away.