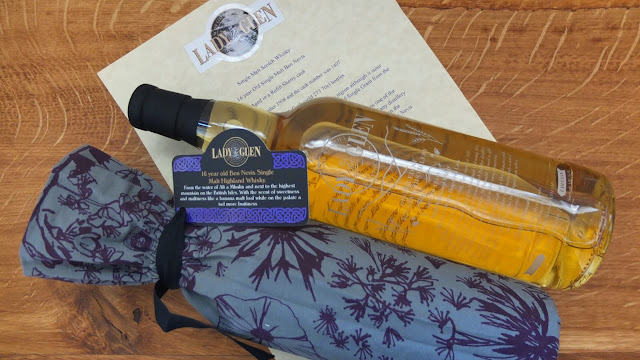 The whisky realm is a small world and I’ve been following local independent bottler Lady of the Glen since its debut release. Always on my to do list, I had never gotten around to purchasing a bottle and when I did finally drop by online, the release in question had sold out!

It wasn’t until a recent Jolly Topper Benrinnes vertical tasting that I was finally able to meet Gregor in person, who is responsible for Lady of the Glen; selecting casks and well everything else that goes with running an independent bottler. I’m somewhat jealous as this was something I always wanted to do but career, distractions and everything else took me down another path. Still, it is great to see a local business prospering and doing something a little different, as you can appreciate from the photograph above. The blog on the website is also worth reading as it features many articles about whisky generally.

If you purchase a bottle directly from Lady of the Glen this comes in a distinctive Scottish inspired floral pouch and a detailed letter providing an insight into the distillery and what to expect once you have opened the bottle. These touches are original and would I expect appeal to whisky enthusiasts abroad who may have to pay a little more than those UK based. Whilst the range has good distribution in the UK some retailers may only offer the bottle itself. I quite like the etched label on the bottle that shows off the colour of the contents honestly and avoids you ruining a label through spillage; something I do far too often.

Since then I’ve met up with Gregor for a general chat about whisky which turned into a vinyl and music marathon. I decided to purchase a couple of bottles that are still available (if you’re quick enough) and first up is this 16 year old Ben Nevis. I do have a soft spot for this distillery with its rugged, weathered and under-invested charms. As I mentioned in my recent review of a 49 year old Ben Nevis, it receives strong support from the independent sector and it is worth watching out for the official single sherry cask releases. 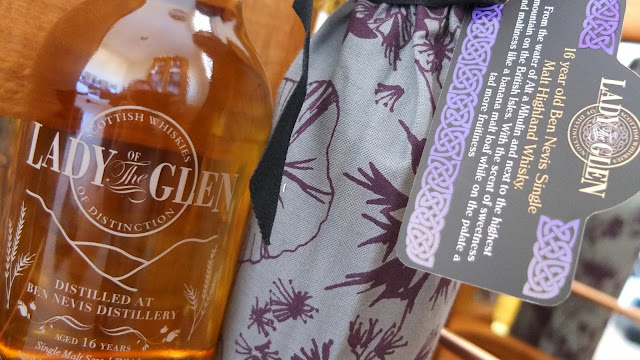 Experience has shown me that every distillery tends to have a sweet spot when ideally a whisky is ready to be bottled. For Ben Nevis this tends to be around 16 years of age so we’ll do the bottle details and then see if this trend persists.

Nose: a real blast of sweetness that I wasn’t expecting upfront making me think this was perhaps a sherry cask that had been used a couple of times. Key lime pie, white chocolate, cinnamon and lots of citrus notes with grapefruit, mandarins and a sprinkling of coconut flakes. Gingerbread, yes. Time elapsed highlights the sherry influence being in the undergrowth with vegetative notes such as bark and decaying foliage; oh yes it has that Ben Nevis character!

Taste: at first I was thinking about Black Jacks which are aniseed sweets but the thick oily texture pushes me onto walnuts and white pepper. More depth with vanilla pod and a touch of tobacco.

As with most Ben Nevis whiskies it possesses its own charms and opens up those layers to intrepid explorers with a touch of water. I’m glad I bought a bottle as a sample wouldn’t really give me the full experience; it’s a real chameleon that refuses to be pigeon holed.

Now here is something interesting as you don’t see too many Glen Ord’s bottled independently and that’s a shame. The distillery is a massive player..

Next up is the Secret Speyside release from independent bottler Lady of the Glen. I met Gregor the man behind the range recently and bought..