Caperdonich is one of those strange distilleries with a curious past. It’s also closed, its stills silent – and in fact dismantled. So that means its whiskies are increasingly hard to come by, and what used to be a fairly affordable spirit a few years ago now sees its prices creeping up and up.

Originally constructed as Glen Grant #2, the distillery first opened in 1898, making it the last distillery to be built in Rothes (Glen Grant itself being the first, in 1840). In 1902 – just four years later – thanks to the Pattison bankruptcy the distillery was shut down. To be fair the crash came in 1898, so it did well to last that long.

By the time the place was refitted and re-opened, in 1965, it was British law that no two operating distilleries could share the same name. So it became known as Caperdonich – the ‘secret source’. Glen Grant and Caperdonich were so close to each other that they were even linked by a pipe, imaginatively called “the whisky pipe”. It passed into the hands of Seagrams in 1977, whereupon the spirit was used in Chivas Regal among other blends, and then it passed into ownership of Pernod Ricard in 2001. In 2002, just year later, Caperdonich ceased to be. And in 2010 the whole place was smashed to bits.

Caperdonich had two wash and two spirit stills, and used a mixture of bourbon and sherry casks for maturation. Aside from blends, the spirit has only really seen life as independent bottlings, notably the Gordon & MacPhail Connoisseurs Choice Series, although though Cadenhead and Signatory also produced a fair bit as well. There was supposed to be a regular distillery bottling available in Italy, of all places, but that didn’t last too long.

And it’s an independent bottling of Caperdonich that I have today. I’ve reviewed a couple before and they’ve both been pleasant: what felt like classic Speyside stuff, but that’s not always typical of this distillery. This is a Berry Bros & Rudd release. Bottled in 1994, aged 20 years, drawn from cask 96536 – unchillfiltered and uncoloured. 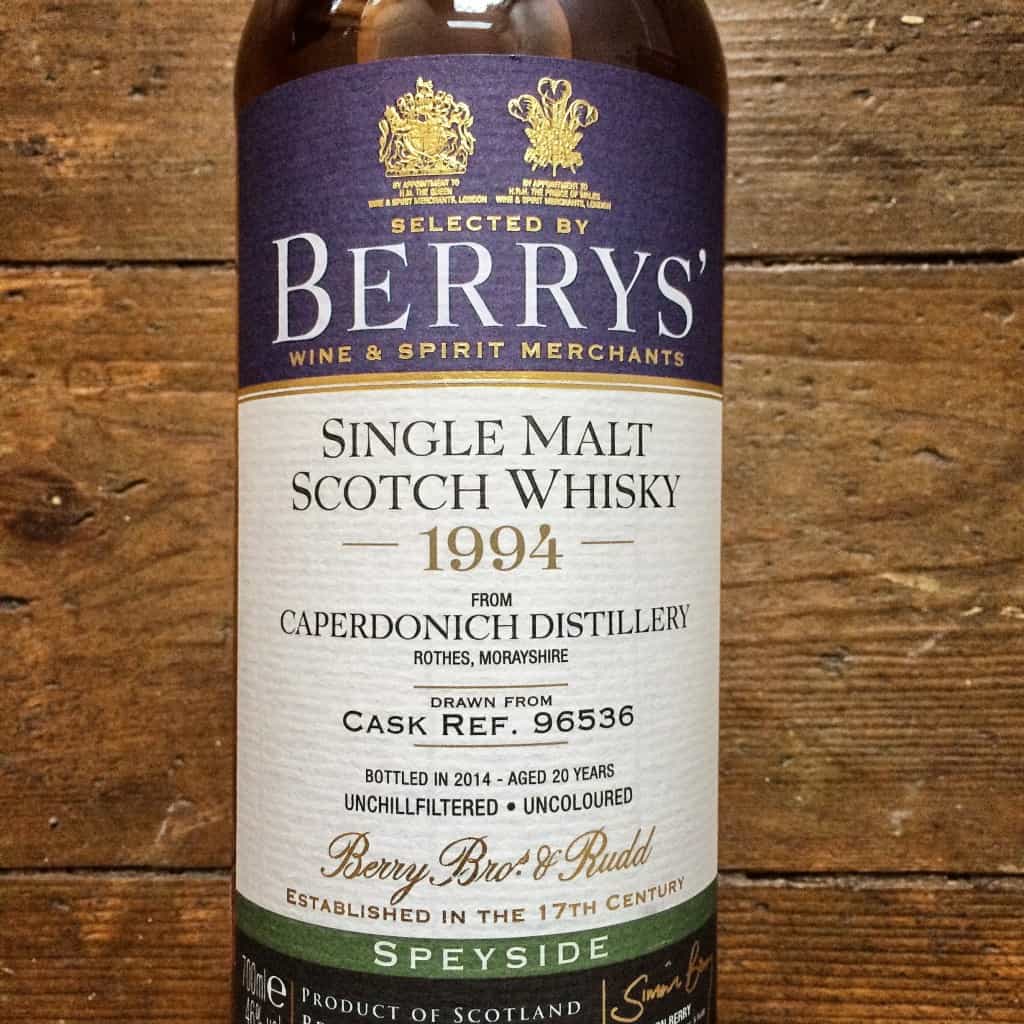 In the mouth: all of that comes through very well. Nice, medium texture, though a very chewy dram. I get the feel of a dry sherry, almost, among the mix of fruits. Mixed peel. Is that a wisp of peat? Very definitely some smoke and warmth towards the end. (Consulting the bottle confirms the surprise peat.) A hint of Lapsang souchong. Hints of something vegetative underneath it all. Honey. Refreshing stuff and a little unusual.

I think it’s hard to ever really judge what a Caperdonich is: when most of the releases are indie bottlings, the distillery character is hard to discern. But what I can say is that I’m often surprised by it, and this dram is no different.

Lively, surprising and full of flavour – and far more interesting than some whisky that’s produced these days. A bottle cost me £88, which for a 20-year-old whisky of this calibre feels about right.