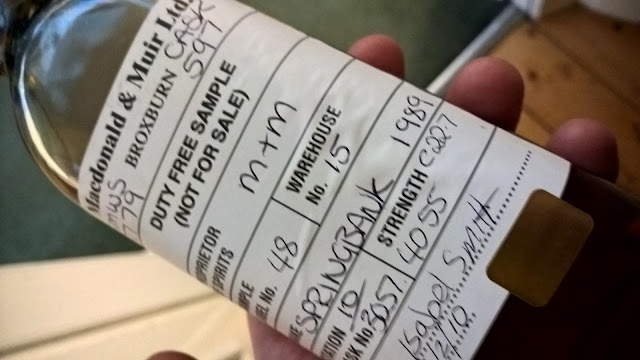 Many say whisky is for drinking, which is true, but I’d go one further and suggest its for sharing. When faced with a rare bottle or decent sized sample I like to share this around; even when its something brilliant such as a Rosebank from the 1950s.

The Vaults in Edinburgh is the original venue of the Scotch Malt Whisky Society. A regular feature here is that you can book the Society’s Share, which allows you to enjoy the last few drops from SMWS casks that wouldn’t fit into a bottle. This can open up a huge spectrum of possibilities and a 200ml bottle sample is a decent enough size for you and friends. Hence this sample 27.79 which is from Springbank distillery.

Nose: right up are those blackberries followed by that UHT banana glue in a good way from my teenage years; you know when you used to piece together model planes and stuff. The wood comes through with bourbon and vanilla before more sweetness with sherbet and liquorice. Returning later more vegetative notes are present with moss, aniseed, nutmeg and resin.

Taste: here I was expecting boldness yet it was missing after the engaging nose. Your usual honey, vanilla and toffee notes with bacon crisps present with that oily fattiness. The faint echo of smoke, dark chocolate and black pepper.

The alcohol strength should give you a clue as this was a very angular dram. Water is best avoided and even when you do the finish remains very watery. An interesting experience but not one I’m hugely taken with despite enjoying almost everything that Springbank bottles nowadays.

I’ve neglected the Scotch Malt Whisky Society this year so far. It’s been for a variety of reasons and these have been echoed by friends..

Just where has the summer gone? Why you may ask? Well, this specific sample dates from a lucky dip win during the Jolly Topper Edinburgh..