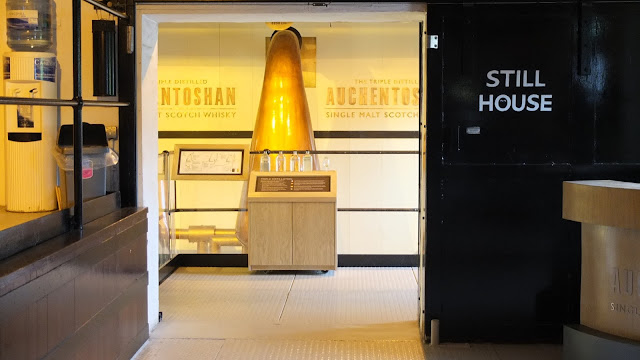 Scotland’s Lowland distilleries were a dying breed until the recent whisky boom gave birth to Eden Mill, Kingsbarns and Annandale. This is the mere tip of the iceberg as there’s more in the pipeline with projects coming to fruition in Edinburgh, Glasgow and Falkirk. Bladnoch is also being woken from its recent slumber so overall its exciting times for the Lowlanders.

There is one Lowlander that stands apart from its brethren by exclusively following the triple distillation practice normally associated with Irish whiskey and that distillery is Auchentoshan. Situated to the west of Glasgow on the outskirts of Clydebank there has been debate about when the distillery was established. What isn’t in question is that Auchentoshan is one of the oldest distilleries in Scotland so we’ll follow the official date of 1825.
Today Auchentoshan is perched alongside a busy road and represents the start of the long 125 mile journey towards Campbeltown (that I plan to endure next year) and potentially your last sight of whisky production for several hours. It is a striking mixture of cultivated grounds including a pond originally created by a stray bomb from World War 2 and traditional distillery buildings. Parking up, we departed on the Classic Tour which lasts around an hour and costs just £6 with a dram at the end.
Photographs are permitted throughout the tour apart from the warehouse area hence why I have so many to select from. Over the coming weeks and months these photographs will be appearing on my Instagram account. There is a natural organic flow to proceedings despite the large numbers attending; we were given plenty of time to look around at the various stages of production. Questions were also encouraged throughout and the roomy buildings enhanced the relaxed feel to the experience. 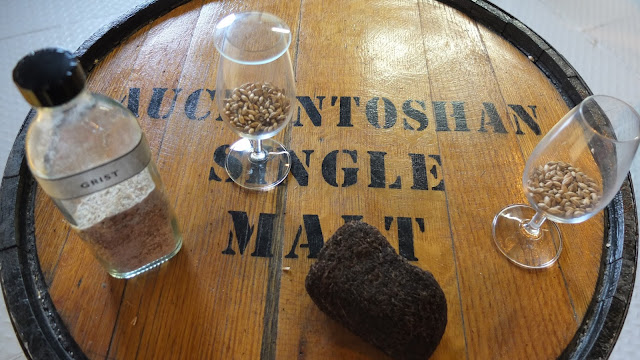 Proceedings kick off at the mill which is conveniently situated right beside the well-aged mashtun. We discussed the lack of a traditional maltings and the local water source which comes from Loch Katrine. Then flowing past various informative pictures and banners we reached the washback area. Auchentoshan has 7 washbacks in total but only 4 of these are viewable to the public. It just so happens that these 4 are the wooden washback variety and the trio of stainless steel incumbents are hidden from view. This actually reminded me of Bowmore (also owned by the same parent company) that originally tried the metallic washbacks before returning to the traditional version. I do think it has some influence on the taste rather than just being more costly to clean.
Heavy iron doors separate each of the areas similar to those seen at Deanston distillery. Beyond the washbacks awaits the Still Room, which comprises of 3 stills; 1 wash, 1 spirit and an intermediate still. Here its exclusively triple distillation which Auchentoshan uses as its key selling differentiator. Of course more mystery surrounds this decision as during the time of Alfred Barnard’s visit circa 1885, the distillery was following the standard Scottish practice and only had 2 stills. You’d think someone would know when this 3rdpiece of apparatus was commissioned, delivered or at least installed but ladies and gentlemen it seems we’ll never know.
In some ways I do like a mystery to remain as it is. The still house contains detailed charts showing the triple distillation process and hands on examples of the spirits themselves. Spending a little time in here clears the senses before you wander across the picturesque grounds, past an old Glen Garioch still before arriving at a traditional dunnage style warehouse. Camera switched off, we then debated the various cask types and their costings. A bourbon will set you back around £80, a sherry butt expect to pay £800 and a prestigious wine cask nearer £1100. All food for thought and in a room just within the warehouse you can tantalisingly glimpse a solitary wine cask that is the bottle-your-own option at £75. This separate area is adorned with cask staves and proudly perched on its own is a colourful host to a delightful whisky. 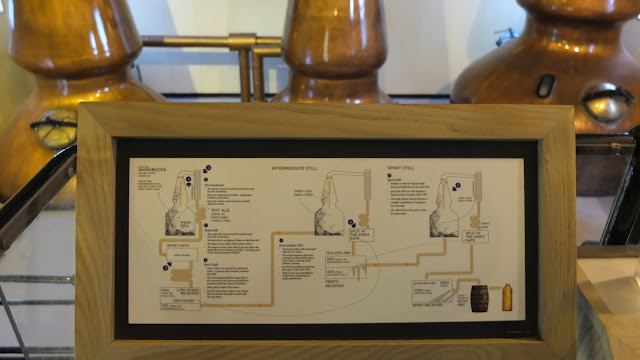 I’ve criticised Auchentoshan in the past for being a little dull and benign. I was always told that a true cask strength whisky from the distillery really shows what it is capable of. This was confirmed when Linh recently gave me a sample of this delightful Bordeaux cask whisky, which I reviewed previously here. For £75 depending on what the cask type is, I’d seriously suggest considering this option despite a well-endowed distillery shop full of other temptations.
The tour then concludes in a sizeable bar area where we were granted plenty of opportunity to discuss the whiskies and their differences with our excellent tour guide Jeremy, before ransacking the shop. It is here that I picked up a several whiskies for a future vertical tasting I’m putting together for Whisky Rover that will start with the new make spirit, then the early years before it can be called whisky and thereafter all the various versions including the travel retail exclusives. Hopefully it’ll be worth the time, effort and outlay and will be on the site later this year.
Overall we were surprised by how enjoyable the Auchentoshan tour compared to those offered by Diageo which fail to create such an atmosphere and informative experience. The Classic tour represents extremely good value as well.
CategoriesUncategorised

Following on from my recent review of the Vom Fass Arran release, we’re arriving at my other purchase that day; a 15 year old Auchentoshan…