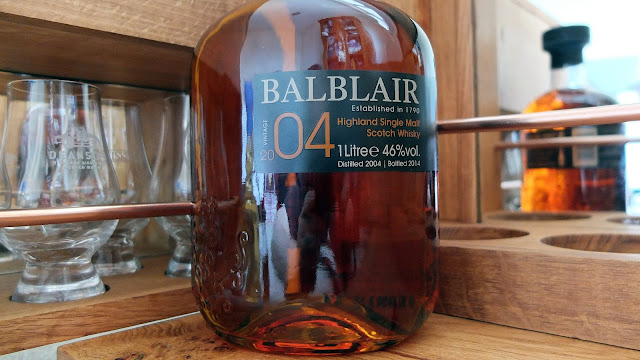 It’s fantastic to see Balblair receiving more attention and growing in popularity in recent years. This is the local distillery for my  in-laws and has often been overshadowed by rival whiskies from nearby such as Dalmore and Glenmorangie. Now the tide is turning as Balblair was one of the first to strike out and bottle at 46% strength with no chill filtration. Their whiskies are also a natural appearance without any of the colour tampering that is so prevalent down the road at Dalmore and to a lesser degree at Glenmorangie.
Whenever I’ve visited the distillery it’s been a thoroughly enjoying and relaxing experience. There is a welcome relaxed vibe on the tour and less of the production line emphasis seen at Glenmorangie where you’re flushed through the production system as quickly as possible before reaching the distillery shop. Instead plenty of time is allowed for you to experience the character of the place and take some photographs. The warehouses are the traditional dunnage style and although the distillery does have some modern technology it’s far from the computerised Scotch facilities we sadly see elsewhere nowadays.
This new found confidence from Balblair is recognisable with their packaging introduced a couple of years ago and forays into the highly competitive travel retail sector. This Balblair 2004 vintage is such a statement and was released in 2014 and is exclusively matured in American and Spanish oak ex-sherry butts. Also released at the same time is a 2004 bourbon cask version which is perfectly acceptable and when faced with both upon my last rampage through an airport it was a tough choice. Both represent great value coming in at £49.99 for a litre of well matured whisky that isn’t shying away like some other travel retail examples with age statements; I’m thinking of the big guns like Glenfiddich and Macallan. Shame on you both and the rest.

Recently I reviewed the Glenfiddich Cask Collection that represents their current No Age Statement range right here. The best of the trio was the Reserve Cask that forms the sherry cask option and is priced at – well would you believe it – £49.99? Yet its night and day comparing that release to the Balblair we have right here. My advice is break away from the big brands and try other whiskies and bring some excitement into your predictable drinks cabinet. Right, review time.

Nose: a touch of rubber which I always enjoy and see as a positive aspect. Then crushed ginger nuts, black pepper, furniture polish and cinnamon. A layer of sweetness arrives with apricots and oranges.

Taste: be very gentle with the water as a little practice pays dividends. Cranberries, ginger thins encased in dark chocolate and plasticine. The characteristic Balblair notes of vanilla and honey are evident. These are joined by walnuts, pecans and blackberries.

Overall a well priced contender if you’re off on your travels shortly. The bourbon version is very drinkable as well and maybe I’ll pick that up next time. If you enjoy the sweeter end of the whisky scale and are looking to try something new without hitting the sherry monsters of this world then this Balblair is an ideal stepping stone to a new dimension or a thoughtful gift.

﻿Balblair is a distillery receiving more welcome recognition. This trend is due to a number of factors; a sparkling new visitor centre, the success..