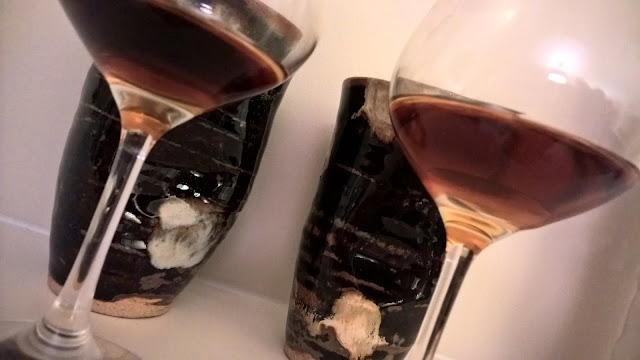 A very generous sample from the Scotch Malt Whisky Society 124.4 dubbed evocatively as full of secret pleasures. This in reality is a 17 year old, first fill sherry butt from Miyagikyo distillery. I’ve enjoyed a few Japanese releases from the SMWS that are top notch and was thankful for this sample from a fellow Harris distillery cask member.
Previously here I’ve only experienced Miyagikyo as part of the recent No Age Statement release and in other Nikka blends. I wasn’t that impressed with the NAS version that was very threadbare and watered down to a detrimental 43%. I’m hoping that the character that was lacking in the official release will be present in vast quantities here; certainly the colour indicates this will be a ride to remember.
Miyagikyo is the second of Nikka’s malt whisky distilleries. It began life in 1969 after 3 years of searching to identify a site that shared many similarities with Scotland . The malt used here is imported from Australia and Scotland and in 1998 the distillery was expanded to include a grain distillery complete with 2 continuous coffey stills. Interestingly as Miyagikyo is in the midst of an earthquake zone, casks are only stored 2 tiers high in the traditional style rather than these awful modern walls of casks that reach up into the gods. Maybe I’ll have the opportunity to visit Japan but for now this whisky will hopefully suffice:
Distillery: Miyagikyo
Distilled: 1996
Age: 17 years old
Cask: first fill sherry butt
Strength: 60% vol
Outturn: 479 bottles

A beast of a dram and I’ve got to say far too unbalanced. The nose delivers but the palate is just a rugged scramble down a rocky hillside. Its uneven, badly thought out and leaves you knackered. SMWS didn’t pick the cask for this whisky (a refill butt would have been an improvement) but at least they could have granted a couple more years to allow a joyful plan to develop.

Our wee tour of the core Nikka blends and distillery offerings comes to an end with this Miyagikyo No Age whisky. I’ve enjoyed going back..

Regulars will know I finally gave in and joined the Scotch Malt Whisky Society recently after years of deliberation. As part of your initial membership you..