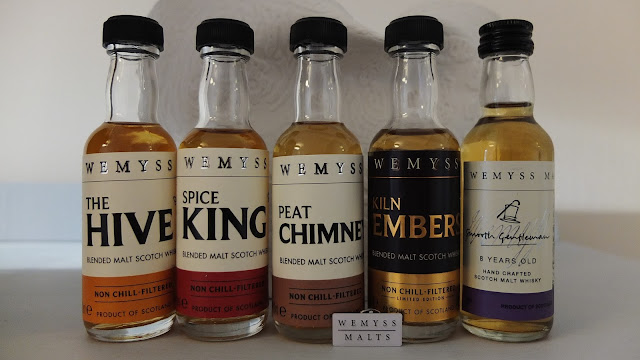 2015 seems to have passed very quickly with talk of Christmas already on the horizon. This is fortunate if you’re waiting for the newly arrived Fife distilleries of Kingsbarns and Eden Mill to bottle their first whiskies. It means we’re almost on the verge of chapter 2 of the novella.

This is the 2nd Tweet Tasting I’ve done with Wemyss via the Whisky Wire and previously we had experienced their Lord Elcho blended Scotch and some single cask offerings. In addition there was the 8 year old Peat Chimney that earlier this year lost its age statement along with the existing range of blended malts. If you prefer an age statement on the label then you can still track down the remants online if you’re quick enough.

The usual factors are at play for this decision and as always it should be down to the whisky itself. Having tasted several Wemyss releases, I can say how enjoyable the (sadly departed) Velvet Fig was and the No Age Statement Lord Elcho is a better dram than its 15 year old brother. With these experiences in mind, I expected the blending prowess of Wemyss to deliver going into this 4 dram tasting.

Yet you’ll say there are 5 drams pictured above? Yes, one is the now defunct Smooth Gentleman Wemyss blend that includes Aultmore; I’ve had this sample for sometime now having purchased it at Kingsbarns distillery. It seems like the perfect company as we finally dive in.

Spice King
Strength 46% vol, Price £36.95
Colour: autumn leaves
Nose: very muted with digestive biscuits, vanilla, very faint orange and sunflower oil. Given time some apple crumble with cinnamon appears but I feel this Spice King has lost its throne.
Taste: a little rougher than I recall previously around the edges with more dominance from the wood. This explains the presence of cereal notes and vanilla. In addition there is custard, sponge cake, allspice and nutmeg hidden away.

Smooth Gentleman
Strength 40% vol  (no longer available)
Colour: olive oil
Nose: creamy Orkney fudge, malted loaf, honey, wine gums and peaches.
Taste: when folk say smooth to me I translate this as bland and that’s the problem here. More woody elements, walnuts, those peaches again but very little else. The No Age Statement Lord Elcho is a much better improvement on this gent.

Peat Chimney
Strength: 46% vol, Price £38.95
Colour: worn tweed
Nose: was debating whether its Arbroath smokies or just smoked haddock. Either way it has that coastal feel and subtle smoky element. Cinnamon, orange zest, white pepper and within the body of this parma violets.
Taste: the smoky element continues but subtle with smoked back bacon. Golden syrup; a chargrilled essence with a well fired burger. Freshly ground coffee and brown sugar.

Kiln Embers
Strength: 46% vol, Price £41.95
Colour: hay bale
Nose: I’m reminded of wet bark from an oak tree, vanilla and cigar smoke. Bacon fat, lard and hob nobs.
Taste: a bourbon reduction on the plate with a richness then it goes off in other directions with a good limoncello, oat cakes, black pepper, gorse and salted bar nuts. All bathed in a decent quantity of smoke.

Best of the bunch here is the Peat Chimney followed by the Kiln Embers. Unfortunately the loss of age statements has amputated the Spice King and to a lesser degree the Hive. The suggested retail prices have risen which is to the expected in the current climate when aged stock is at a premium; what we’re left with is a compromise of sorts.

Now and again you’ll find me taking part in a Twitter tasting event organised by The Whisky Wire via my Twitter account @raithrover. These gatherings provide..