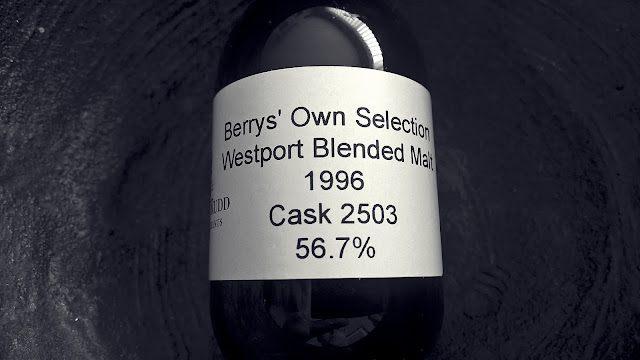 Ah yes, the mysterious realms of tea spooning to protect the original distillery and their brand as such. I’ve touched on this before when reviewing the excellent if covert 20 year old Secret Speyside whisky released by Lady of the Glen. All very undercover and curious yet the whisky itself remains delightful and that’s what matters. I did not trouble Gregor who runs and owns Lady of the Glen for any insider details regarding its origins or threaten to throw him off the Forth Road Bridge for not doing so. Sometimes it’s more fun to let mysteries remain exactly so.
This sample was kindly provided by Berry Bro. & Rudd and is the third review of their current batch of releases.  The journey to date has been very interesting by taking us to overlooked distilleries such as Allt-a-Bhainne and Glentauchers and next up is this 1996 Westport. This is a perfect example of tea spooning or by adding a drop of whisky from another distillery it cannot be sold as coming from X and infringing their hard earned trademark or branding. Rather than being a single malt instead it has to be sold as a blended malt whisky as it does not come exclusively from one distillery. It’s a moot point in reality as you can easily search for the origins of Westport and other tea spooning ‘distilleries’ online. Even the official description places the origins as being somewhere near Tain an area I know particularly well. Teaninich and Dalmore are nearer Alness and Balblair is nearer Edderton although in all cases arguably the nearest major town is Tain.
The answer of course of Glenmorangie which has experienced a French style boutique makeover in recent years with the sixteen men of Tain relegated to a backdrop and the tartan traditions glossed over for a new generation. It’s not an image for me although its proving very successful in the United States that continues to be a growing market for Glenmorangie. Earlier this year as part of an exclusive event hosted by none other than Charlie Maclean himself at the Whisky Solstice I tasted a stonking Glenmorangie. Devoid of cask interference and colouring (yes they still like to use a drop of E150) this 9 year old bottling from the Scotch Malt Whisky Society (125.68, a tale of two ladies) was an example of a naked traditional Glenmorangie whisky that delivered at cask strength and 9 years of age. This Westport is slightly older but I have high expectations so let’s get on with the review.
Distillery: Westport (Glenmorangie)
Distilled: 1996
Bottled:  2014 (18 years old)
Strength: 56.7% vol
Additional: cask number 2503, natural colour, no chill filtration

Taste: this does benefit from water. Punch with more white pepper and then the lemon reappears before giving way to tiramisu with creamy mascarpone cheese, a sprinkling of chocolate and a gentle lashing of coffee.

This tastes like a young whisky and not an 18 year old release, but its already demonstrating some punch and complexity. An interesting and welcome opportunity to try something new.

This is the third review of five covering some recent releases from London Wine & Spirit Merchant Berry Bros. & Rudd. By some wonderful coincidence..

We’re leaving the mainland for our final review from the current range of cask bottlings from Berry Bros. This completes my recent run of reviews from..