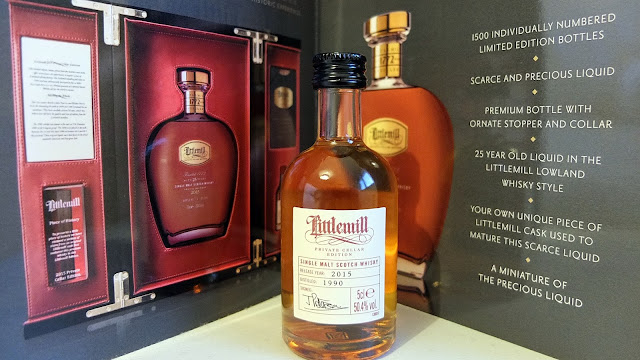 To celebrate the initial flashblog event from the Whisky Wire I was sent this sample of the forthcoming Littlemill Private Cellar Edition 2015 to review. Any closed distillery release demands some of the spotlight nowadays, but this one is especially interesting for a number of reasons.

Firstly, we’ve seen a new found apprecation of the distillery in recently as extended periods of maturation have revealed unexpected delights. This is certainly true of the cracking Cadenhead Littlemill’s over the past couple of years that have met universal approval; a high standard has been set.

This official Littlemill is a vatting of 10 casks from the remaining 1989 and 1990 stock. Then after this marriage of vintages, the whisky was finished in Oloroso sherry casks. I’m immediately wary of cask acing and finishing. My experiences of whisky from this distillery show that once vatted it can be wonderful and does not require such a finish for an unspecified period. I’ll keep an open mind during the tasting.

Whether its totally run dry or they have more is another question; the distillery also enjoys strong independent support so its not a Brora, Port Ellen or North Port just yet. A nice link then to my next point as this bottling represents the most premium, luxury, blue-chip (call it whatever you will) release of a Littlemill.

This is a numbered edition of 1500 that comes with a piece of the cask and a miniature, which I presume is what we have here. It’s wrapped up in one of those high-end packages, complete with an eye catching stopper and bottle shape. You’re certainly paying for this eye candy in the overall price, which is far in excess of any Littlemill release that has gone before. For instance Gordon & MacPhail just this month released a 24 year old for £250 and that’s a sizeable difference.

It’ll be interesting to see how the edition fares at this luxury pricing level as its smack right into the elite closed distillery ranks. The Cadenhead releases have all come in under £130 and even at auction have marched into the £200-£300 price bracket. I’m pleased to see some greedy sellers looking to clock in with a massive profit have failed to see their lots meet reserve despite doubling the price they paid out only weeks previously.

Taste: a very different Littlemill to those I’ve experienced previously. There is a thickness on the palate from the sherry finish that is enjoyable. This could swamp the whisky but somehow it retains a delicate graceful poise. Black pepper, almonds and a boozy Christmas cake filling that’s spent a couple of weeks combining. A woody persistence rises before Terry’s Chocolate Orange moves into a lasting orange peel finish.

Overall this is very good dram and somewhat unusual given the traditional characteristics we associate with a Littlemill. I’d be prepared to pay around £200 for a bottle without any frills and that leaves a significant shortfall. Makes this extremely difficult to recommend to anyone but the most loyal of Littlemill collectors or those with more money than sense.