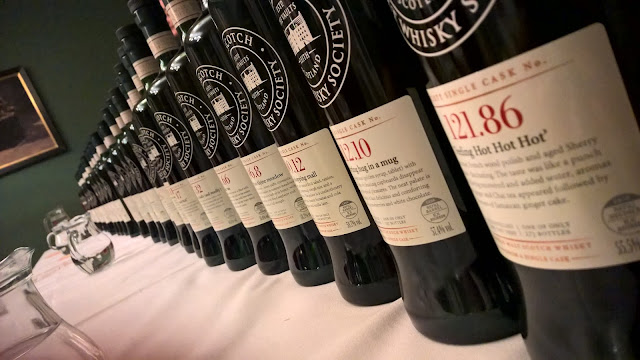 Christmas means many things from gift guides such as this example from Juliette Hearsay or to the traditional ‘best of’ line-up. In reality the latter is also just another promotional tool to persuade you to splash out on that something special. Yet there is another festive event that registers on the whisky scale and this is the epic outturn from the Scotch Malt Whisky Society.


This year a mighty 43 single casks were bottled for this event. Think about that for just a moment. With all of the new distilleries popping up throughout Scotland much like a rampant weed infestation on your driveway; it’s an unstoppable whisky tsunami, building momentum. Towering above us mere mortal whisky enthusiasts it threatens to sweep us all way in one fell swoop with ferocious power and destroy our bank balance in the process.
At a rough guess I’d say around 120 distilleries are in production currently in Scotland and some are years away from legally being able to bottle whisky. That’s almost a third of the distilleries catered for if the SMWS didn’t look abroad or offer some duplicates amongst its outturn being particularly fond of Caol Ila and Bowmore for instance. In theory there should be something here for everyone regardless of your own personal preferences. Ditch Christmas and be thankful such a thing takes place annually.
Last year I attended a preview of the 2014 humongous outturn and managed to purchase 6 bottles with the most memorable being the Cambus and the cask strength Old Pultney was great fun. The distinctive SMWS bottles formed an orderly queue across the room with invitees being asked to select from the assortment. Attendees gazed lovingly from a distance whilst consulting their smart phones and notes to decipher the Malt Society numbering system. Really, by now I thought they should have memorised the coding?
Since then, twelve months have passed swiftly and I find myself back in the Queen Street Scotch Malt Society branch for the 2015 preview tasting. Armed with my trusty notebook and camera I give you a brief snapshot of what to expect at the end of this week. Unlike last year we were not limited to a specific number of drams, with the Society preferring to offer unlimited drams combined with smaller measures. Thankfully there was plenty of water and spittoons to hand, as I must have clocked up 20 or so. 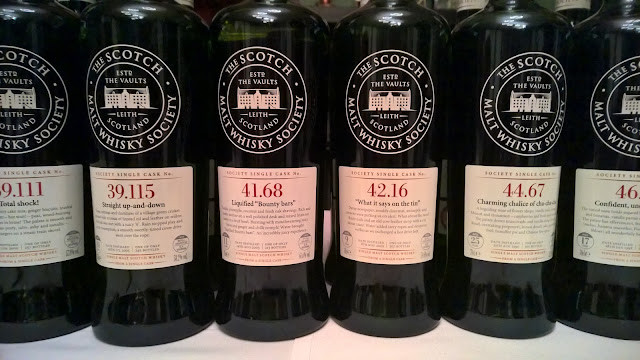 There were some bottles missing in action including 30.87, 53.232, 82.20, G7.7, 10.85 for the preview. The lack of a grain example was lamented on our table as we’d like to see the SMWS bottle more of these on a regular basis. The Bunnahabhain was also regrettably elsewhere although there was more than enough to consider. So moving on, I’ll summarise some of the hits and misses here before a couple of more detailed reviews.

B3.2 (Rock Town)  Ooey-gooey Cinnamon Bun
3 year old, 55.3%, new charred oak, 204 bottles, £59.00
A rose tint to this bourbon which I was attracted towards after the excellent B3.1 debut last year. A perfect Christmas dram with seasonal spices including cinnamon and also rhubarb on the nose. Taste wise amazingly rounded and refined for such a young age. Another winner from this distillery.

1.198 (Glenfarclas) Night Nurse in Carpenter’s Overalls
21 year old, 55.2%, refill ex-bourbon hogshead, 176 bottles, £82.10
The Society has bottled some cracking bourbons from this distillery in recent months including 1.188 and 1.194 so I was very interested in checking out another well aged Glenfarclas. Not hugely blown away by this one with a peachy colour and memories of rolled cigars and marzipan.

3.249 (Bowmore) Barnacles and Bath Bombs
14 year old, 56.4%, refill ex-bourbon hoghead, 252 bottles, exclusive to offers with 46.35 Party Pair £119
Another that prompted much debate, as initially it received a thumbs up before we returned later to experience disappointment. A very interesting Bowmore from the fact its just odd. Memories of tundra, Highland scrub and floral notes. Overshadowed by the other Bowmore which is covered in a more detailed review further down.

29.173 (Laphroaig) Forget Time and Space
16 year old, 59.8%, refill ex-bourbon barrel, 250 bottles, £73.70
A real Harvey Nic’s frontage with this Islay expression. Offering everything up front but stepping beyond this it was cavernous void before reviving itself for the finish. I’d pass.

41.68 (Dailuaine) Liquified Bounty Bars
11 year old, 61.6%, 1st fill ex-bourbon barrel, 215 bottles, £50.20
Winner of the most evocative name of the night. We were all attracted to this but left wondering what delights Bounty Bars blended offered instead, as it failed to live up to such a dynamic billing.

50.71 (Bladnoch) Alfresco Brunch
25 year old, 58.2%, refill ex-bourbon barrel, 165 bottles, £137.50
At the more expensive end of the tasting was this Bladnoch but what a superb example of the Lowland distillery. Rich on fruits and sweets; it felt as if I was trapped in the Willy Wonka factory. A treat but justified.

66.76 (Ardmore) Guilty Pleasure
10 year old, 61.0%, 1st fill ex-white wine hogshead, 274 bottles, £47.00
I bought two bottles of this so that should tell you all you need to know. Amazing aromas of bacon crisps and beef dripping; it felt as if I was swimming through a sea of fatty deposits. On the palate its a real startling experiment thanks to Ardmore’s characteristics and the cask. Robust beef stew, red meats and maple syrup at play here. One of the star drams but really divided opinion.

96.8 (GlenDronach) Relaxing in an Alpine Meadow
9 year old, 58.3%, refill ex-bourbon barrel, 172 bottles, £44.20
This one immediately jumped out from the SMWS line-up as its only the 8th release from this distillery they’ve managed to bottle. Unfortunately not a sherry cask, but given the success and pleasure the Society Glenfarclas releases have provided, an early destination. Bizarre in reality, perhaps bottled too young? I was disappointed hugely by this and put it down to my personal tastes. Speaking with others it was highlighted as one to avoid. Glad to have experienced a rare example but not on my shopping list. 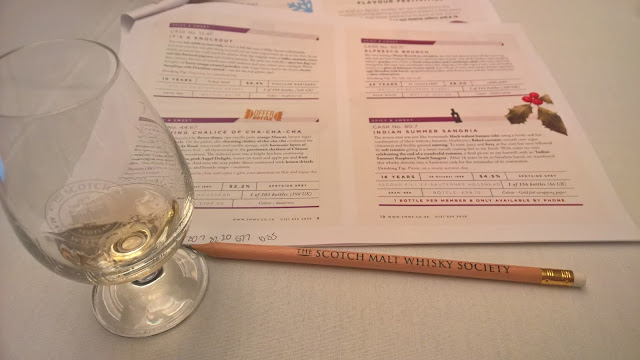 Snapshot impressions sorted, lets move onto 2 detailed nosing reviews from the comfort of my own home:

Taste: superb symmetry between the peat and sherry butt with neither winning out in the contest. Earthy, autumn leaves, a touch of the kiln smoke, blackberries, cinnamon and cloves. Nothing explosive but thoroughly enjoyable.

Taste: more of the fresh wood feel carried on from the nose, a vanilla ice cream float with lemonade. Flashes of sherbet and sweet peanuts, my home-made granola with walnuts, almonds, honey, cranberries and jumbo oats.  Delicious.

These two were along with the Ardmore the highlights of the evening. A relaxed atmosphere amongst friends new and old, a welcome assortment of small bites and the freedom to explore, rounded off a memorable and engaging evening. Roll on next year!

If there’s one flaw in the formidable arsenal of the Malt Whisky Yearbook, excluding some of their suggested whisky websites to follow, it’s the Closed..