This is a distillery tour, or perhaps I should actually say a distillery discovery with a difference. Kennetpans distillery pre-dates pretty much every distillery in operation today and was the biggest distillery in Scotland by the 1730s. In fact, no one is entirely sure when a distillery was first established on the site, but it could be as early as the mid-1600s.

To put this into context what else happened in the 1730’s? Well, a large scale migration from the Highlands to the colonies of America begins due to landlords increasing rent prices i.e. the start of the Highland clearances. Rob Roy MacGregor died in 1734 and it seems an era of instability and changes across the world were in full flow

Kennetpans was brought to life by the Stein family; a whisky dynasty that established several distilleries including the nearby and much larger Kilbagie, which no longer exists today. The family went on to establish a distillery in Ireland (Bow Street) and purchased Marrowbone Lane. They pursued new markets for their whisky and invented the continuous still. Such was their financial clout they also assisted families such as Haig and Jameson establish their whiskies in the marketplace. With such power comes responsibility and the Stein’s were not afraid to use their influence to ensure those that stepped out of line regretted such a decision.

Back to today, and you can see from the above photograph why many believe this ruin is a castle of sorts. Perhaps this visual strength, a suggestion of fortification and impressive stonework is why Kennetpans still stands. Yet time is slowly running out for the site and before I delve into the detail I would urge you to visit the official Kennetpans website which is full of information, historical photographs and articles. A huge amount of effort and research has gone into establishing this online resource. 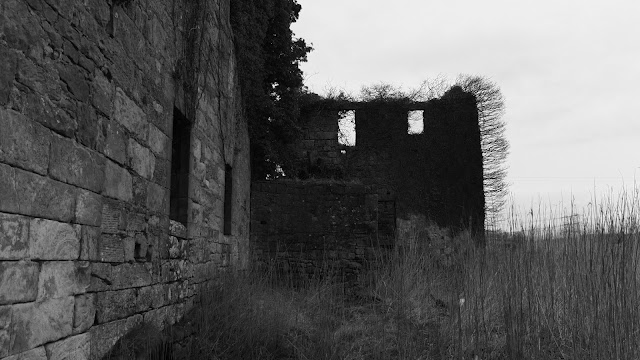 The first ruin you’ll see when crossing the nearby River Forth or driving past Kincardine is the distillery building itself. This is the current focus for the conservation effort with a figure in the region of £900,000 to stabilise the structure. The current owners with the assistance of Historic Scotland volunteers have begun to clear the natural invasion that has swallowed up the buildings, cocooning them in an ocean of green. Slowly the distillery building is being released from the iron-clad grip of nature, revealing its splendour and unfortunately current state.

This is only the tip of the complete distillery site, but the only area accessible to the public currently. Fortunately, I was given access to what lay beyond and invited to explore the ruins on my own, which resulted in a magical and thought-provoking few hours despite the cold weather.

What is mesmerising is the sheer scale and the task that lays ahead to safeguard the site. Yet the current owners are determined to preserve Kennetpans and have the support of many including Ian Buxton, who commented:

“If any part of Scotland’s distilling industry, indeed its whole industrial legacy, deserves to be saved Kennetpans is surely it”

“Kennetpans was where distilling left the farmyards and became a true industry. The birthplace of commercial distilling.”

Any such effort will have my support and as I hope reading this article, you’ll be inspired to follow the project. It became clear as I spent a few hours wandering across the site, the task about how to communicate and capture the vast buildings and stunningly unique environment. For once I have uploaded a series of short videos from various areas of Kennetpans starting outside the distillery here which hopefully helps transmit the scale and beauty of the area.

There are several others available on my YouTube Channel here, which show the inside of the distillery, the steam engine area, the waterfront and the huge warehouses. I’ll also return to Kennetpans on a summer day this year and add more media – heck I was inspired enough to put the wellies on and help remove the jungle-like invasion.

When Kennetpans was in production, the main method of transportation was by horse and cart, or for heavier loads and enterprising whisky producers, by boat. Hundreds of locals worked at the site during this period and you can imagine the hive of activity standing amongst the ruins today. The brilliance of the location is that it harnesses everything the Stein’s would need. Today the land is on a floodplain, but driving down to the distillery it is clear that it would have been a fertile agricultural region, capable of producing the raw materials for Kennetpans.

Situated a stone throw from the banks of the River Forth, boats would have been able to dock at the distillery pier, before setting off for Edinburgh or English ports with Kennetpans whisky. Today the remnants of the pier are still visible: 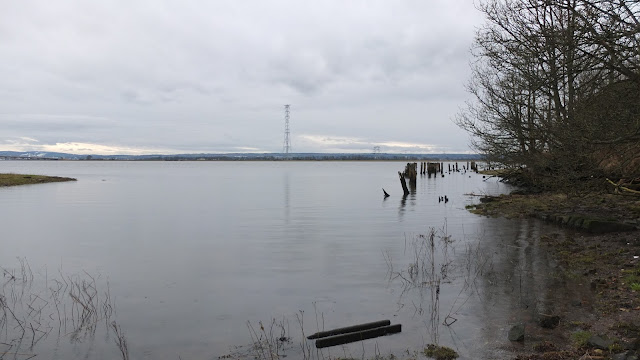 Within the distillery, there are still glimpses of elaborate features that suggest little expense was spared in its creation. A key area is the power source which was from a steam engine. This Boulton & Watt invention was the first in Scotland and was ordered in 1786. Stepping into the distillery, which is a shell today, you can still picture how this machine took centre stage with it being placed in a specially constructed area and perched upon two formidable towering stone structures.

The wheel itself from the engine was incorporated into the stonework; a lavish piece of detail that whilst serving no practical purpose, makes for an impressive feature today as does the engine room: 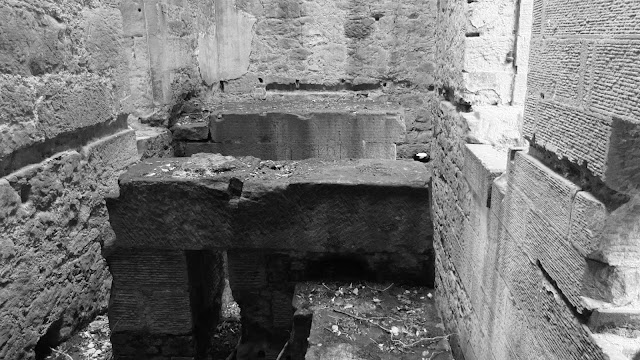 Time for a moment of reflection, and a dram if I had one to hand! Kennetpans has so much to tell and I’m wary of squeezing everything into a single article. We’re just about to leave the distillery to explore the vast stone warehouses and other structures that are situated nearer to the River Forth.

I’ll describe this experience in the second part of my Kennetpans visit on Whisky Rover next weekend. If you cannot wait then there are videos on the YouTube channel. Finally, I’d like to thank the current owners for their warm welcome, time and hospitality today, plus all the work they have put into saving the distillery. Speaking with them over a welcome cup of tea, their story is inspiring and how by purchasing an extra piece of land many years ago they (without realising) acquired such an important piece of Scottish whisky heritage.