How time flies and for Eden Mill distillery located in Guardbridge, which is just outside of St Andrews, this release marks a year nearer their first whisky.

Rewind just over a year ago and this new distillery that had previously made its mark initially with a variety of beers before moving into gin, started experimenting with new make spirit for its whisky. Speaking to a member of staff at the time it was relayed that the team were still seeking to ascertain the character of spirit they felt comfortable with.

As part of this process Eden Mill released a trio of new make spirits each imaginatively labelled ‘Aged 0 Years’, in a series of distinctive 50cl ceramic bottles and each limited to less than 500 units. Colour coded and released around Scottish events you had the Robert Burns Night 2015, the St Andrews Day 2014 and the Hogmany Spirit 2014. Yes, I know that’s not how you spell Hogmanay but I’m just following the label on that release!

The cool thing about each of these is that the barley used varied between each bottling so if you wanted to experience Golden Promise Pale malt then you could, or the effects of chocolate malt. A bonus feature was that each was hand numbered and ownership guaranteed you a release of the spirit at each subject annual anniversary, as the journey towards whisky unfolded. A small number that are unclaimed are available at the distillery in 20cl sizes for £20.

Now we’re past the 1st anniversary for the St Andrews Day spirit and I’m pleased to have purchased a spare bottle to sit down and bring you this article. This is made from 100% Golden Promise and as spent a year in a French octave, which is around 1/8th the size of a standard cask before being bottled at 43% strength. Containing 50 litres of spirit, this ensures more interaction with the wood in a shorter period – facts sorted lets try this 1 year old! 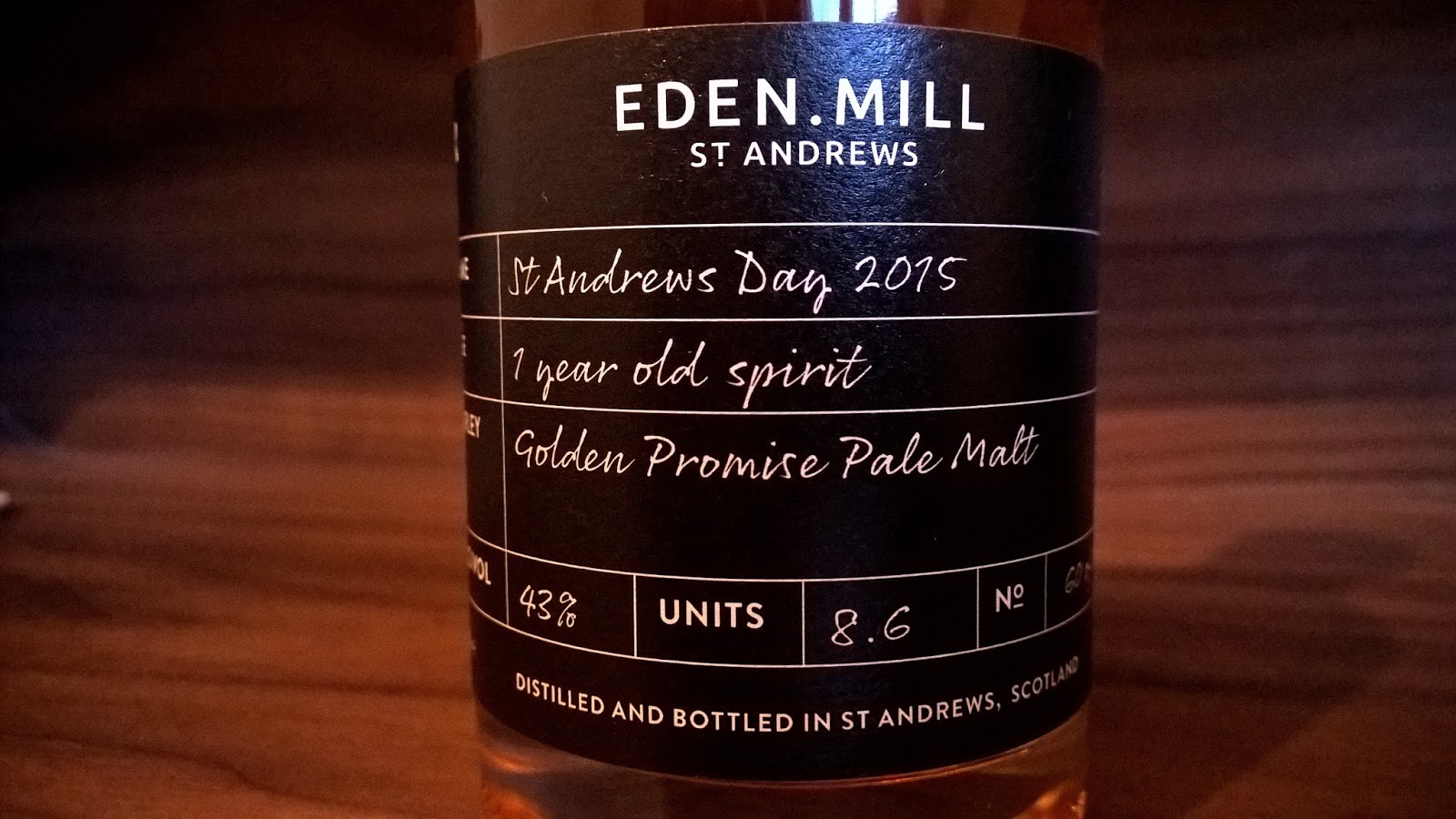 Colour: bamboo cane
On the nose: an almost wine gum slap across the face. A really sickly sticky sweet presence moving into a red berry and juicy apricot reduction. This does smell like a wine cask finished whisky – not what I was expecting at all. A perfume note (almost gin-like) and home made strawberry jam. Beneath all of this is the rugged hints of the wood itself.
In the mouth: that sweetness carries through onto the palate. This could be the recent Glenmorangie Milsean with a heavy hit of sugar, candied sweets with red berry flavours. A little char in the mix, before the floral notes come out for the finish and best to avoid water.

Overall: well I was expecting a young spirit with a heavy wood influence. Whilst the youthful age shows with the lack of real depth, I’m pleasantly surprised overall with the results after just a year of ageing. It’s perfectly drinkable and a talking piece. Of note are the floral-gin-like notes that I’ll be very interested in comparing to the remaining duo of 1 year old spirit releases when they hit the market. Then deciding which I have would have picked if this was my own distillery to represent its character going forward.