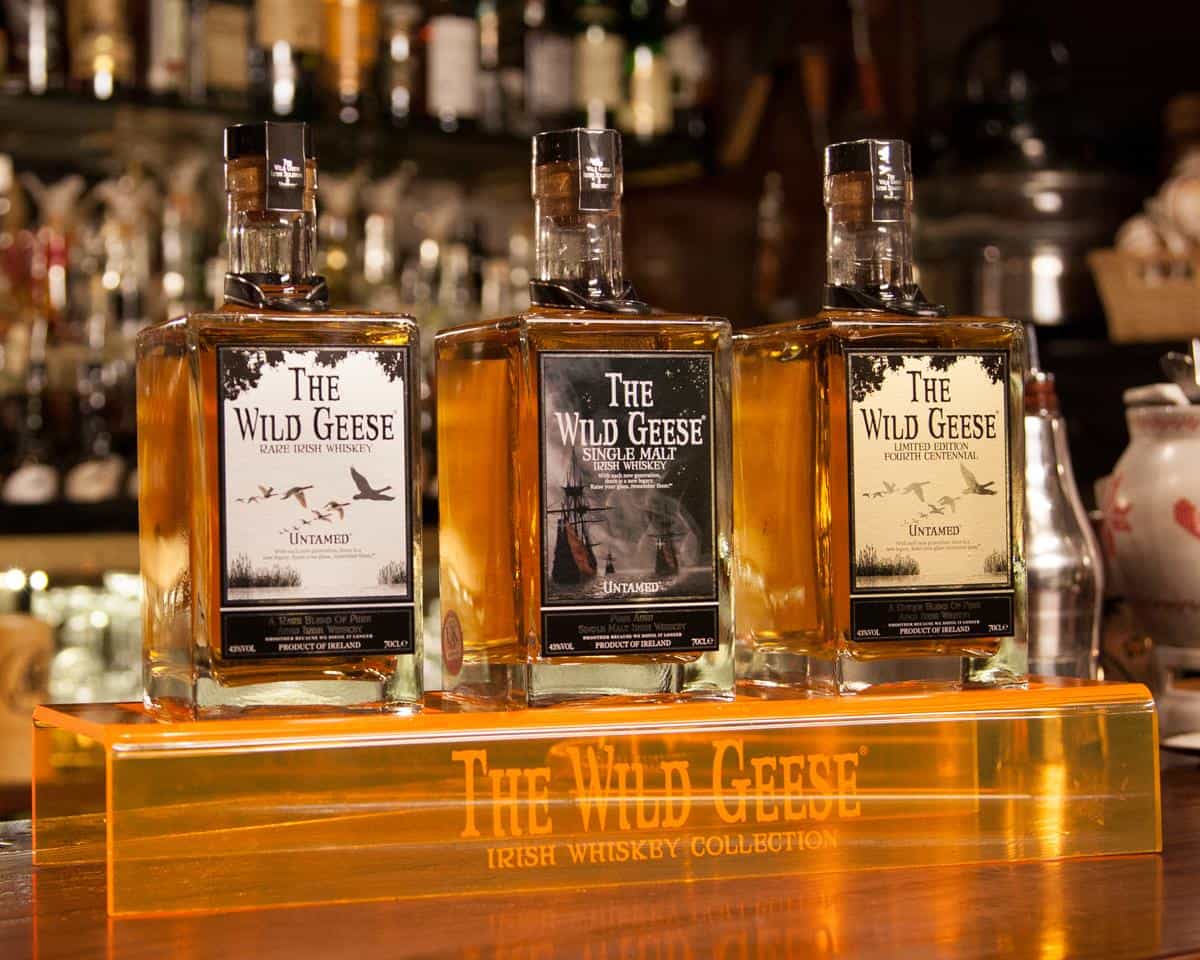 Wild Geese Irish whiskey has been around for a few years now. The brand gets its name from a few centuries back, when ‘Ireland was torn by injustice and natural disaster’. Those soldiers and refugees who were ‘forced to set sail on ships for other lands’ were also known as the Wild Geese. I recall seeing these drams at a whisky show some years ago, and when I sampled them there I quite enjoyed them. It was nice to spend a bit more serious time with them, as I wondered if I still thought they were okay.

One of my minor peeves about some Irish whiskey is that you don’t always know what you’re getting (although the industry oligopoly means you can guess). Brand-new distilleries, such as Teeling or Hibernia, are passing off decades-old whisky as their own produce, because they can. People moan about Scotch regulations, but as the most heavily regulated drink in the world it has strict definitions of what you can and cannot do, and what you can and cannot put on the label. At least, for the most part, the consumer knows where she stands. And these days single malt drinkers want to know about the provenance of their whisk(e)y, but it isn’t so easy with some (not all) of what’s produced in Ireland. Hopefully that’s going to change with the likes of Waterford Distillery and Mark Reynier’s epic project. That’s not to criticise Wild Geese in the slightest, but more of a comment in general.

Up until a couple of years ago, there were less than a handful of Irish whiskies that Wild Geese could possibly have originated. A little online digging suggests that Wild Geese comes from the Cooley distillery. You don’t need to be Sherlock to work that out – the Wild Geese website says it is “produced using an Extended Double Distillation making for a much smoother product with more character”, and Cooley distillery offers double distillation, in contrast to the triple distillation that Irish whiskey is better-known for.

Anyway, I was very kindly sent a range of samples of the Wild Geese range to taste. The whiskies are generally all available for around £35-£55 these days – I believe they used to be much less – and are mostly bottled at 43% ABV (with the exception of the 40% blend). You can pick up a little tasting set for less than £20 if you want to give them a go yourself.

On the nose: first impressions are of something well-balanced, malty and fruity. Baked apples. That pot still Irish whiskey quality is very noticeable – it’s cleaner, yet somehow less characterful that I would expect.

In the mouth: exceptionally clean to the point of being clinical in its execution. Two dimensional, but very well expressed: baked apples again, with a touch of woodiness and bitterness that prevents it falling into sweet territory. Sparks of lemon. Grassy. Herbal. A sour note that I can’t quite put my finger on. I hate to use the word smooth as it is generally meaningless in tasting notes, but here this is – indeed – well. Smooth. Velvety, without being too thick. Almost a bit too slick. The sort of behaviour in a whisky that makes a newcomer swoon, but makes crusty old dogs like myself raise an eyebrow in suspicion.

That said, this would make for a decent everyday drinker and a stepping stone from blends to Irish whiskey.

On the nose: simple. Barley, with touches of yeastiness one finds in champagne. Crème fraîche. The sort of light fruitiness of new spirit. Not a lot going on if I’m honest, but sometimes blends aren’t about analysis.

In the mouth: not far off the nose really. Again simple, light fruits – melon or grapefruit. Touch of Sauvignon Blanc. Creamy – sour cream. Soft fruits, such as raspberries. Short finish. Though, to be fair, the flavour possesses a good level of intensity for 40% ABV, but as far as blends go, it’s not especially complex. This used to cost £18, which would have made it a really good buy at the time. 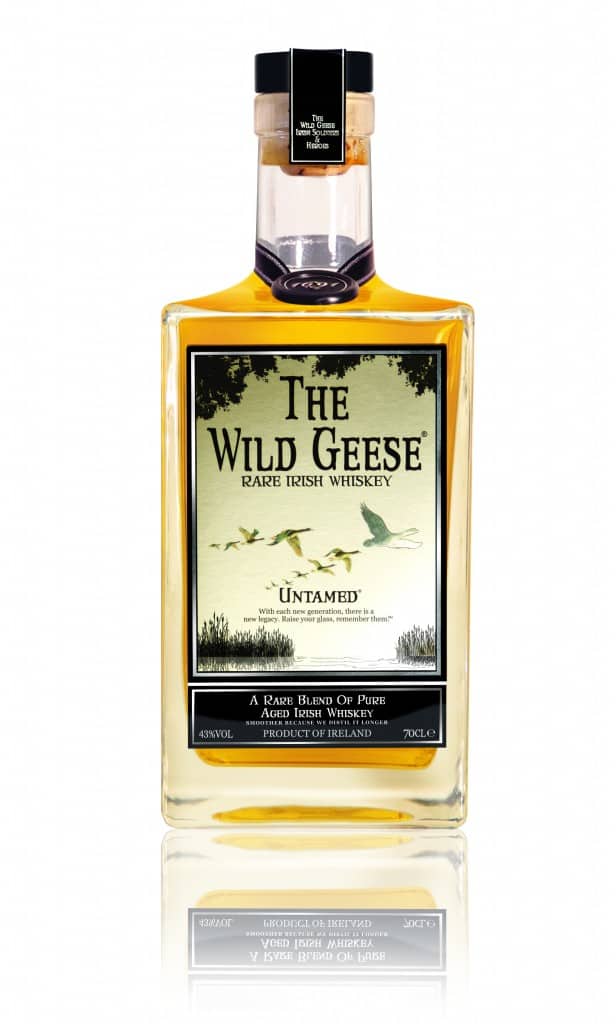 Colour: lovely rich, deep gold. Quite a glow to it.

On the nose: not very forthcoming. Vanilla and floral honey. Grass. Quite hoppy, almost like a light fruity ale.

On the nose: nicest aroma of the lot so far. Quite oily: linseed oil, even rapeseed oil. Touches of fino sherry. Stewed apples. Orange marmalade. Lightly perfumed – touches of rose or jasmine. Very complex and diverse.

In the mouth: All of the nose comes through nicely. Vanilla, honey. More wine, though touches of Chardonnay this time. Marmalade. Blood oranges and grapefruit. It’s the most complex of the lot, certainly, and has a very clean finish. My favourite of the lot.

There seems to be a theme throughout them all, which is this streak of nicely balanced fresh fruit, apples and honey. They’re all bright and clean whiskies too. There’s nothing off the beaten path, few outlier flavours, little to suggest that Wild Geese is radically different, but does it need to be? Not at what was originally a very low price point.

I don’t think crusty old single cask addicts (I count myself as one of those) will find a huge amount to enjoy – but that said, for those wide-eyed young things getting into whiskies and who want something pleasant and affordable, then this range is a fantastic place to start. Wild Geese whiskey is leagues better than Haig Club in that sense.

Brand Ambassadors – The Last of a Dying Breed?