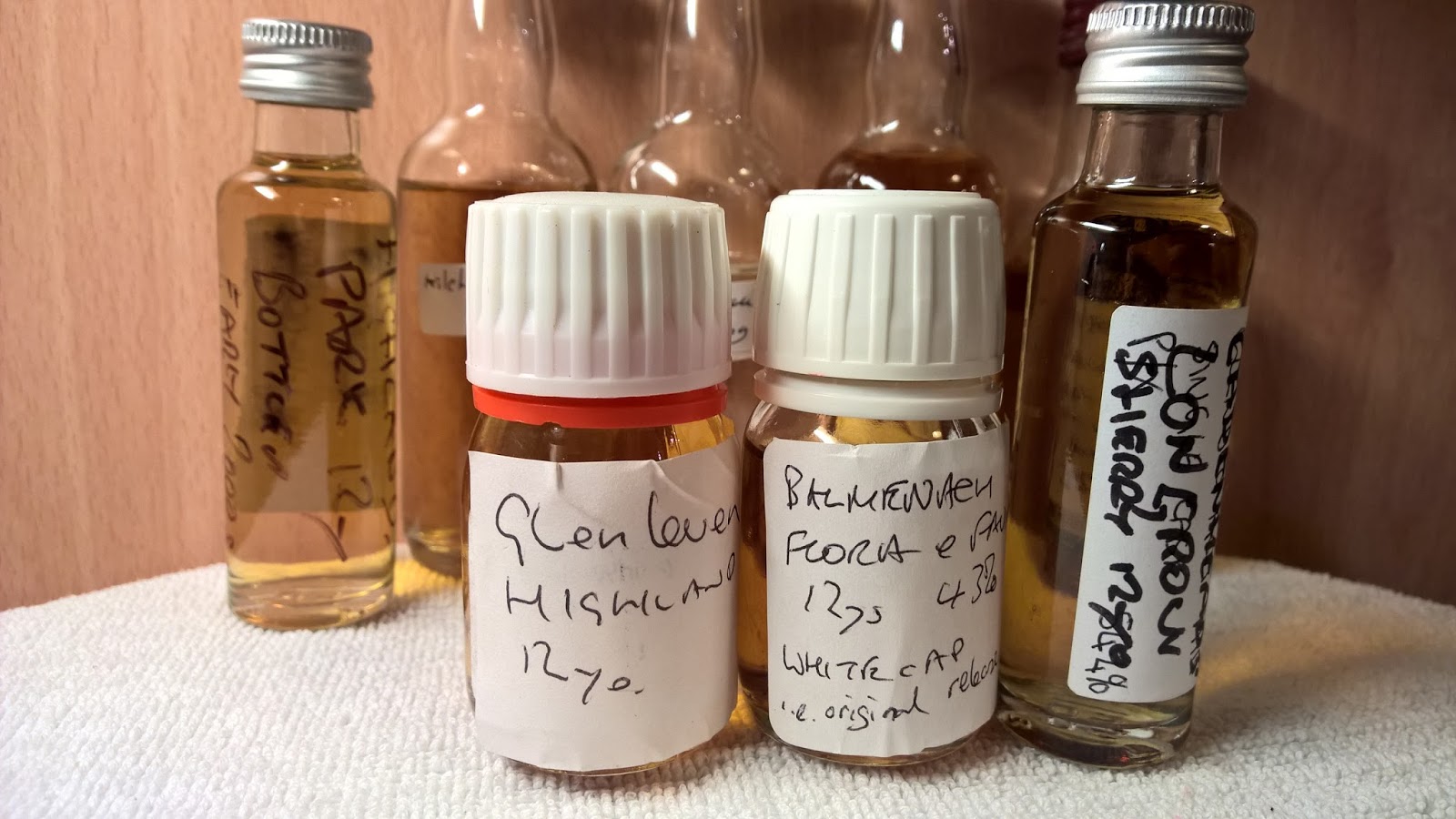 We’re back on another instalment where I polish off a varied and unconnected assortment of miniatures, or put them out of their misery! A tour of whisky where you don’t know what the next dram will deliver.

This sequel piece was entirely unexpected and its only thanks to a room redecoration and clearance that I now have another handful of whiskies to discover. We’ve got representation from Islay, America, Flora & Fauna plus some Cadenhead treats. Lets kick it off!

Ardbeg A Rare Find (Gleann Mor)
2003, bottled 2015, 12 years old, 53.7% vol, bourbon cask
Outturn 241 bottles
This is from a newish independent bottler who has been putting out some interesting single cask releases. I’ve had a nip of this earlier in 2016 but we’re now sitting down for a review.

Colour: a tinge of barley field
Nose: salty brine oozing from the glass. White chalk, talcum powder, earthy peat and cut through by lemon giving a real freshness. A dying kiln and what is best summarised as a Scottish fish supper (haddock) wrapped in newspaper. Delicious!
Taste: the salty brine comes through majority and with a meaty quality just like I’ve plucked a hot dog out of the tin. Then just a gentle sea breeze takes us along a coastal walk – its not rugged or stormy – just enjoyable.

Overall: I knew this was rather good from a shop tasting and around £95 a bottle a decent price compared to the younger and more expensive Scotch Malt Whisky Society 33.132 Beauty & the Beast which was 4 years younger and £30 more expensive. Go do the maths.

Now this should be interesting. The original host was a white lead cap bottling which means its was the original release. Balmenach is one of the more collectable bottles as part of the defunct Diageo Flora and Fauna range. You can still pick up some of these very easily even today, but the rarer ones are extremely difficult and costly to source. These include Craigellachie and the legendary Speyburn bottling! Speyburn is of course untouchable when it comes to whisky.

Colour: a brass rubbing so this reeks of colouring being added!
Nose: nothing stunning with some honey, a little liquorice, coconut and plenty of caramel – no make that caramelised apples. Also detecting a slight metallic rust which I often associate with E150 being added and rubber bands.
Taste: comes across very sweet on the palate. A real richness of sugar and toffee with a little orange residue in there and tobacco.

Overall: this certainly isn’t characteristic of the independent bottlings I’ve had from this distillery. A pleasant peppery finish and overall very drinkable if well, a little bland. There’s been some efficient blending here from Diageo. Question being does the end result show what we expect from this distillery? I’d argue not. It feels forced to meet a certain profile and not what Balmenach is all about.

Colour: well, its new make so neutral and I’d be worried if it wasn’t!
Nose: whipped cream meeting icing sugar before vanilla custard is added. Fresh cottons sheets. Interesting as it doesn’t smell of alcohol compared to some of the spirits I’ve had from the Scottish new wave of distilleries.
Taste: wow now this tastes totally different from the aforementioned new makes I’ve had. A real mix of sweet and sour. Vanilla, rolled oats, some spice from the rye and a pleasant metallic finish.

Colour: apricot
Nose: there is peat but its withdrawn, instead we have a lovely citrus note with lime forcing through. Also present are oranges and a floral note. White chocolate and an almond sweetness entertain in this refined Caol Ila.
Taste: as expected the peat tenacity has stepped back, even the smoke has evaporated. More unexpected fruity sensations with tangerines, orange peel and melon. A rich, warm caramel sauce and sticky toffee pudding. Decadent certainly and entirely pleasurable. A fine Lapsang Souchong arrives for the finale and finish.

Overall: marvellous, it really is. Caol Ila at such an age takes on a new form and identity. A bottling to watch out for on any radar.

Colour: cinder toffee
Nose: a little coconut but this drops a gear and the red berries and toffee kick in. Damp wood, orange and…
Taste: a meaty quality but balanced, very well with the toffee, orange and red cheddar of all things. Not your typical Longrow, the cask here has taken it in another direction.

Overall: just a lovely mellow whisky. Not an attention grabber, just content to do its own thing and very well. A great evening relaxation malt. Stick some jazz on the record player and pour this. Dangerously drinkable as proven by the above as I’d finished the sample before finalising the tasting notes!

This will be one of those very green bottles with a green box from the 1980’s. It had a day-glow effect on passers-by and is now discounted. Apparently this contained Glenlossie and Glenkinchie, but I’ll try not to hold that against it, for now…

Colour: fudge
Nose: wet cardboard, some apricots and pineapple. Cornflakes, a yeast touch and toffee.
Taste: wow, wasn’t expecting this level of impact. Here’s flavour! Really juicy and sweet on the palate. A little tobacco, black pepper and honey. Some vanilla in there for sure with the wood. A little dark chocolate and cinnamon.


Overall: not a great nose but those first impressions fade away once you taste this blend. This Glenleven has more depth that many popular blends we stomach today. I’d buy a bottle. 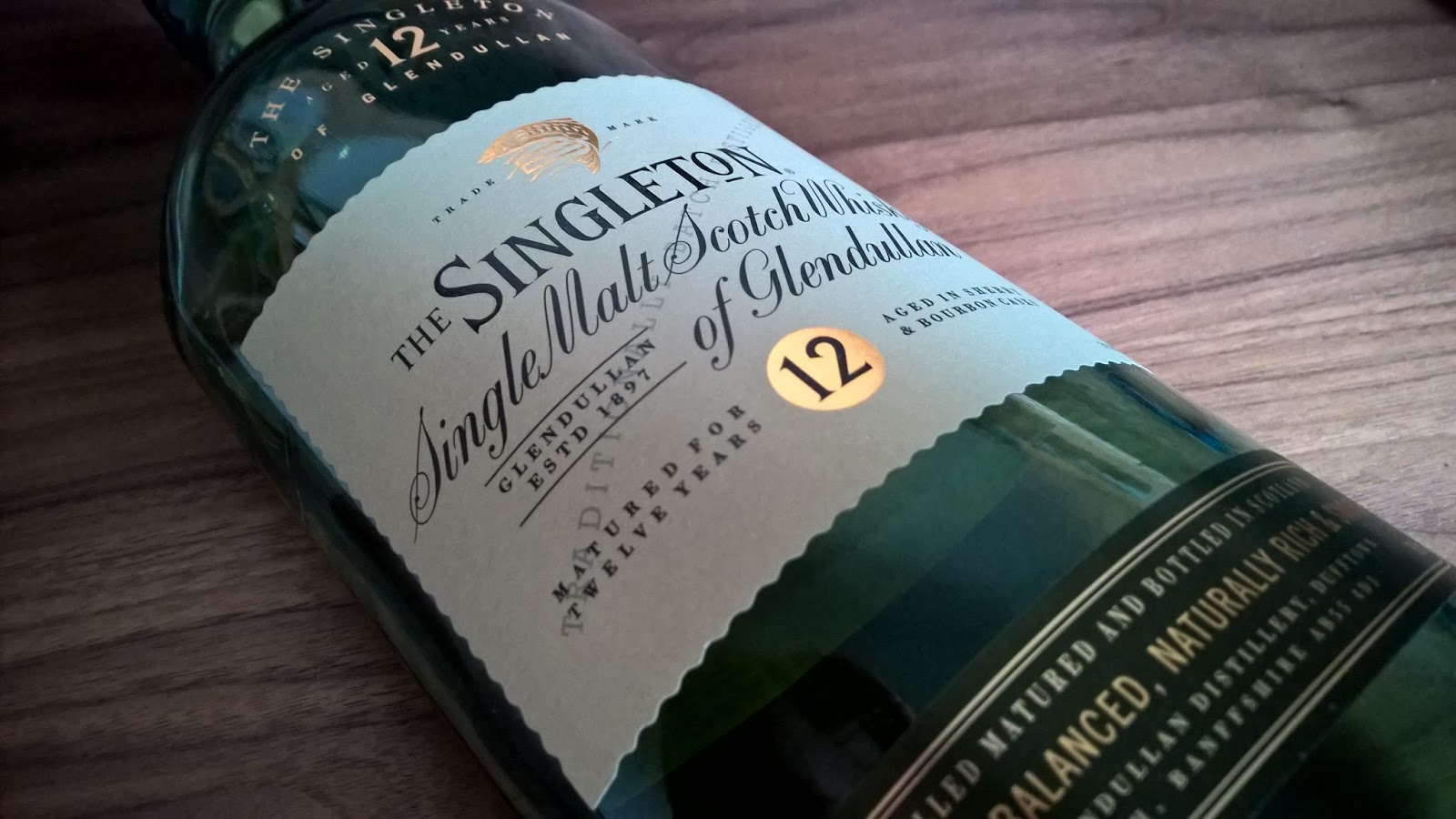 The older style Highland Park 12 year, in the rounder bottle with the Orkney sunset pictured and the old logo. Time to jump just back over a decade.

Colour: an Orkney sunset
Nose: a chocolate digestive and lots of oat action. Caramel and tablet sweetness and a floral Heather aspect coming through, backed up by a leather jacket.
Taste: a comforting sherry feel on the palate. Currants, orange peel, fudge and malted milk biscuits.

Overall: average really, it reminds me to check out the current version for a comparison.

Kilchoman Sanaig
No Age Statement although meant to be 4-5 years old, 46% vol
Blend of 50% sherry and 50% bourbon casks

Colour: sandy beach
Nose: a real moss and vegetative aroma with a salty brine coating almost everything. A dirty vanilla, honey and sweetness of cream soda rise up. More almonds, heather and sherbet are sought out. Rounding it off is a touch of orange and bacon fat.
Taste: a nose that applies to the palate. Much of the aromas apply once more. Intense peat and the vegetative decay apply. Bark, a sugary essence and smoked bacon round off this Islay trip.

Overall: a perfectly pleasant enough dram. If I was being critical (which I tend to be), there isn’t much here to distinguish Kilchoman from its Islay rivals. Where is the character? That unique aspect? It’s all a little common for want of a better word. Retailing at £50 this is overpriced for what it offers; nearer £30 would have been more realistic.

This is a seriously good cask for Longmorn highlighted previously by a group of enthusiasts who were enjoying it during a tasting as an under the table dram. I did enjoy it that evening and was given a sample to take home.

Overall: this offers a lovely balance on the nose. From a 1st fill butt and at cask strength this would have been a beast. In this scaled down variation there is still much to saviour and a sherry dram that I’d hope almost everyone would appreciate. 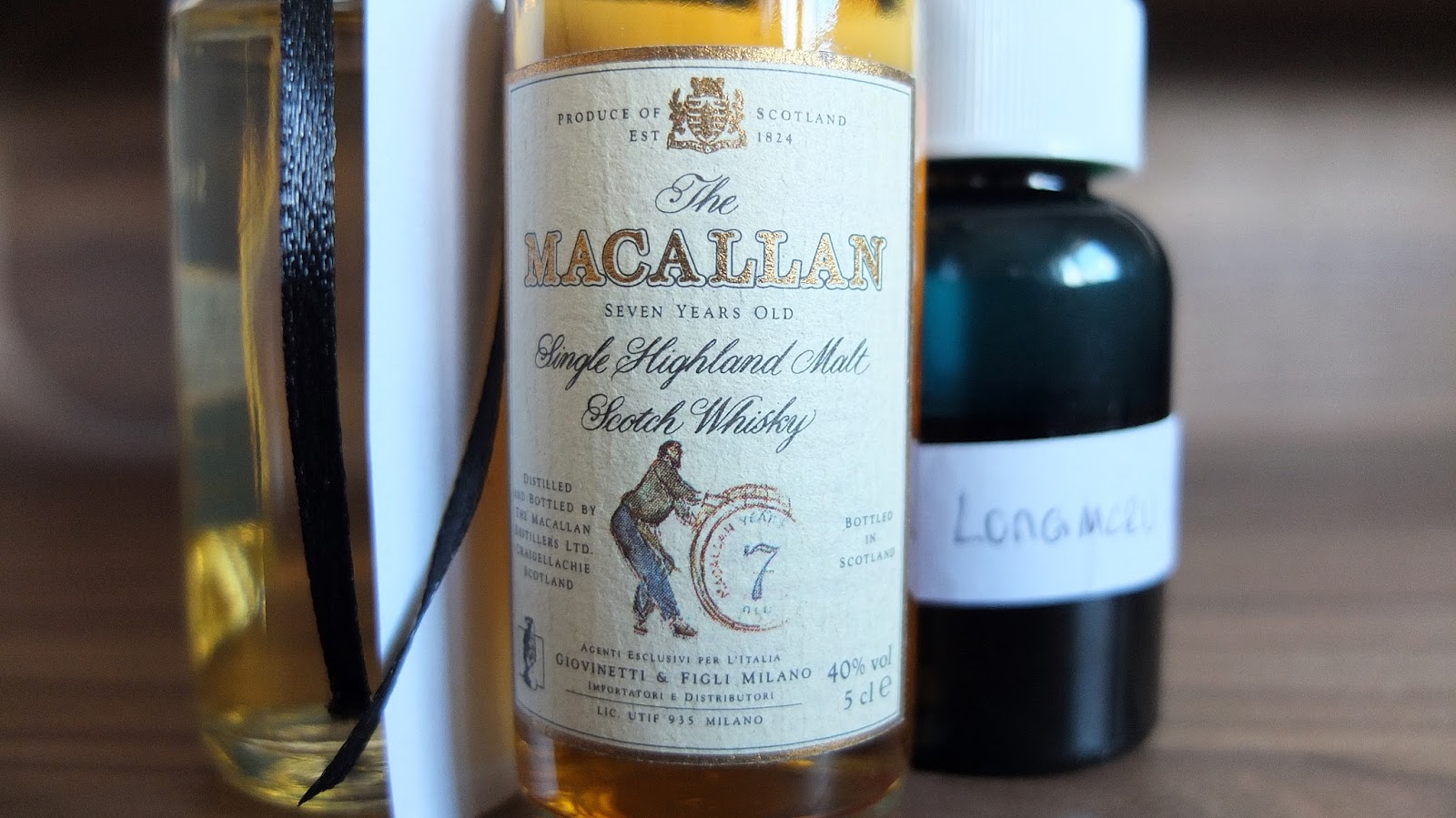 Colour: Irn Bru
Nose: glazed cherries, coconut flakes and Szechuan peppercorns. Pink Lady apples and on the fringes some plastic, no make that wine gums.
Taste: initially this feels over-diluted with only the remnants of oranges and cranberries remaining. A hint of rubber followed by a cinnamon stick lingering finish.

Overall: it’s a lite-sherried Macallan and that’s not a criticism. A higher strength would have been appreciated. It is however easy to appreciate why this has been discontinued. Perhaps in a warmer climate it may have been more appreciated? It lacks the sherry-oomph factor and the qualities I really appreciate in a Macallan.

Colour: golden caramel
Nose: a slight suggestion of oranges, heavily grain fuelled with bananas and vanilla. Little else, forgetful yes but not insulting.
Taste: boom that grain again, you can feel the alcohol but the flavour is lacking dramatically. Very one dimensional.

Overall: what you’d expect for a bottled to order product for a local hotel. Extremely cheap and a bygone era thankfully. I think this was bottled in 1993 given the coding on the miniature, as this fits in with the label with the old regional phone codes that were replaced in 1995.

This is an American release being 75cl and the 12 year old version of Glendullan. Depending on where you are in the world the Singleton range can mean a different distillery. For instance Glen Ord caters for the Asian market. The remnants of this US release were given to me by a friend of friend.

Colour: apple juice
Nose: oranges and a musty dunnage aspect. Given time coconut, a little lime and white chalk. It’s odd as for 12 years old I expected more character.
Taste: rich and smooth it says, well certainly the latter which in book translates into bland. Not a welcome host with water. Another dram and lets try again? Oranges return, pears, a little cinnamon, black pepper moves us into the brief finish. I don’t hate it, yet it exists and nothing more.

Overall: perfectly balanced? I suppose if you’re aiming for mediocrity then this is the standard. A whisky designed for tumblers where you lose the aromas and can mix it with something else to add taste. The use of sherry casks is certainly necessary. Such a shame to finish a fun article with a disappointment, but here’s to the next instalment!

This feature is dedicated to the miniatures we all have sitting around, gathering dust and slow evaporating. More than most, I have too many of.. 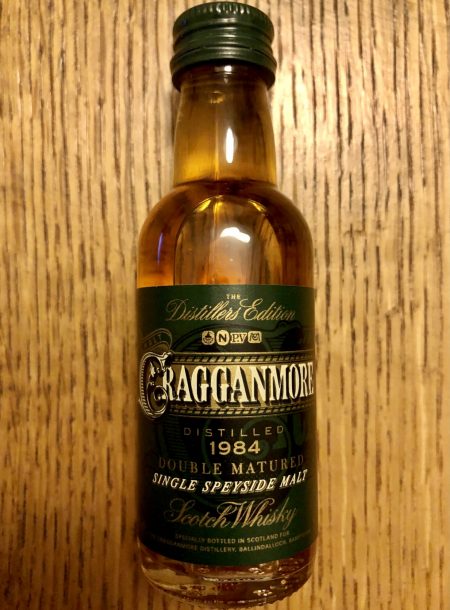