Glen Moray would play a defensive position in Diageo’s tactical master-plan of global domination except its owned by the French company La Martiniquaise until they see fit to snap it up. Yet let’s play along for a moment with this dream, as in the midfield you have the solid hard working Caol Ila that is overlooked and undervalued. On the wings, you have those flamboyant and silky smooth high profile malts such as Port Ellen and Brora. And leading the line is the recently signed Mortlach, which has been promoted from the substitutes bench – although given much hype mainly due to its high price tag and fashion sense, it has yet to live up to its billing.

Football anecdotes aside the point is Glen Moray is positioned at the cheaper end of the malt market. This is no criticism, as La Martiniquaise has to divide and conquer markets. Walk into any supermarket in Scotland and head for the whisky section then you can almost guarantee an edition of Glen Moray will be present and accounted for.

At times it is easy to take its presence for granted, or its more traditional presentation as a bygone relic. Bouncing around the realm of £20-£25 malt whisky, you’re not expecting a wonderfully blessed, skilful example of a malt. Yet never dismiss the underdog as Glen Moray for many I know, is their go to supermarket whisky and even in today’s inflated whisky transfer market, it remains rather good value.

For the purposes of this mini-vertical I’ve purchased a trio of Glen Moray’s including 2 official releases that could not be more different and an example of an independent version. Pre-match introductions done, lets toss the coin and kick off the reviews! 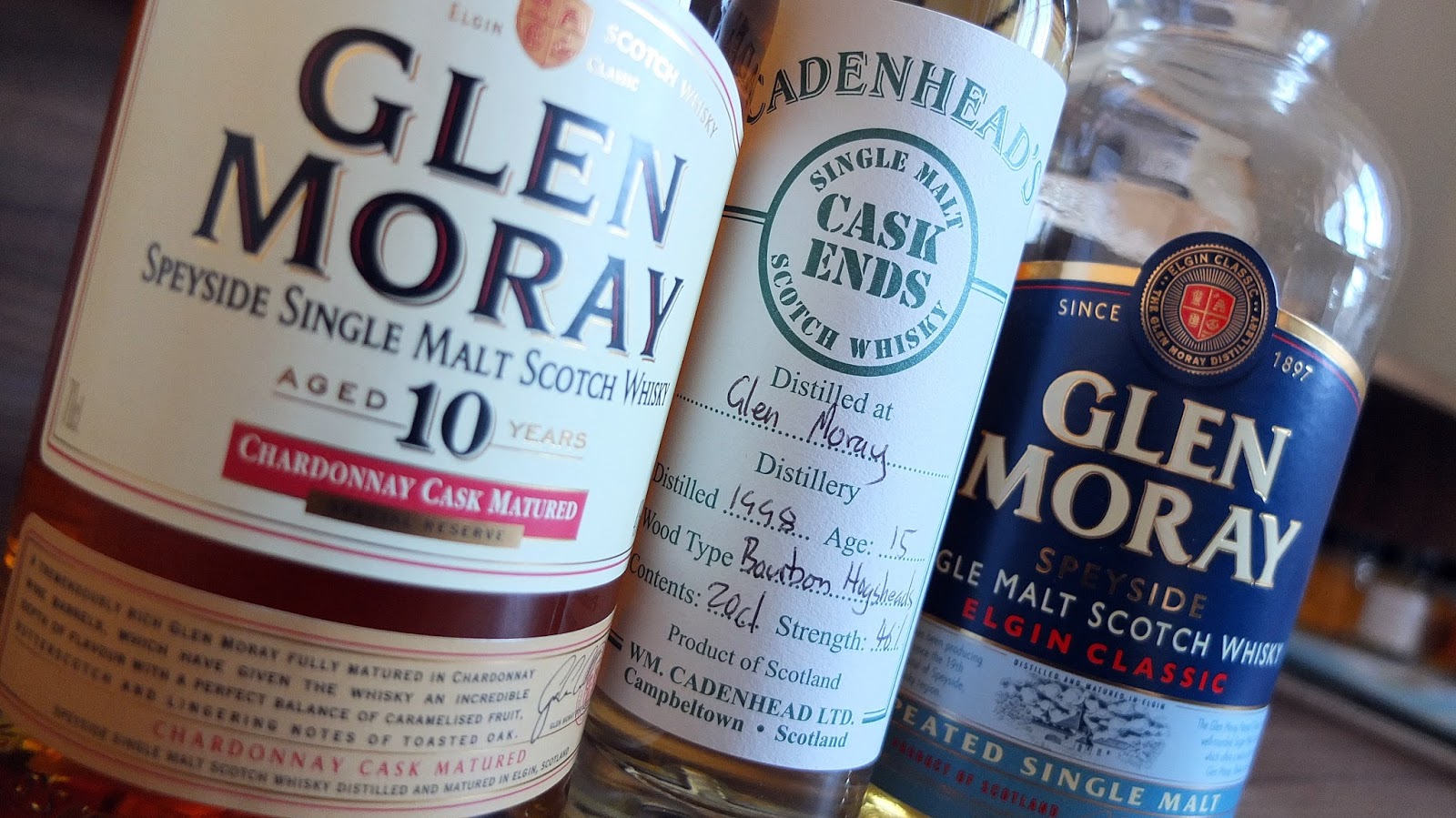 Colour: a faint hint of tan but not much colour whatsoever suggesting a tired cask?
On the nose: upfront vanilla, a clean and revitalising persona. A little char from the cask, cotton sheets, candy sticks, apples and some crispy chicken skin – bizarre.
In the mouth: more emphasis on the apples and some pear in there as well. Vanilla and honey with white grapes and a dollop of cream.

Overall: the naked Glen Moray in this tasting and whilst I’m appreciative of the higher strength, this one is just solid and nothing more. A good starter/introductionary dram but compared to the other 2 on show here; a little safe and boring.

Colour: reminds me of vinegar from a local chippy!
On the nose: marzipan, toasted bread, apple and cinnamon. It still remains fresh and clean but with a buttery, oily feature. An odd nose to dissect as it feels a little muddled? Caramel, rhubarb and orange certainly with a nutty aspect as well.
In the mouth: walnuts, redcurrants and I want to say strawberry jelly from my childhood. Butterscotch to a certain degree and homemade marmalade. A little drying with white pepper towards the end.

Overall: this offering is growing on me. Perhaps because it’s keeping its true secrets back and only offers glimpses now and again. You know you’re going to have to work a little hard to depart from 1st base with this lass and that’s part of the appeal.

Peated Single Malt Scotch Whisky, official bottling, 40% vol
Going back a couple of years now, I can recall tasting a very young peated Glen Moray spirit off the stills at a trade show. This was the genesis of what we have today.

Colour: linen napkin
On the nose: white chalk, decaying vegetation with an energising flash of sea spray. Given time in the glass these forceful qualities mellow revealing pine cones, tarragon, sugar cubes and a creamy quality.
In the mouth: subtle is the word I’m thinking, this isn’t a peat bruiser. A rich layer of vanilla, some Highland Heather and a wee touch of salt, or hot dogs with brine. A waft of smoke exists, as does dry crackers.

At this price range, it’s hard to criticise. Yes, there is a watery finish and a higher strength would have been beneficial.

Match over its hard to pick a winner between the official versions. The Peated offers most of its charms up front and doesn’t do much beyond. The Chardonnay i 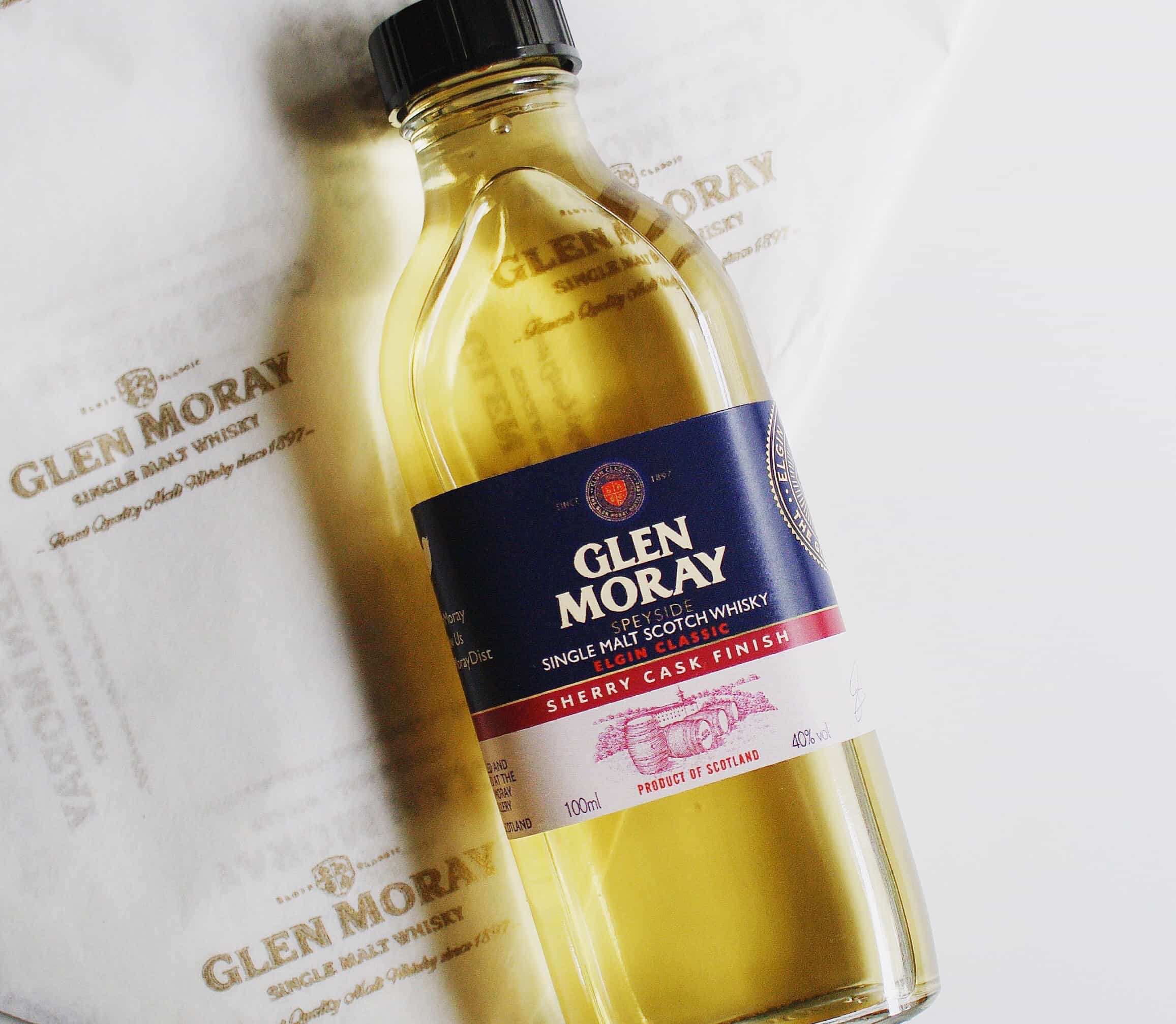 Firstly, an admission as the bottle pictured here isn’t the same one reviewed. An easy mistake given they’re both hand bottled options from Glen Moray..