Deanston has built a formidable reputation for its limited editions that have been mainly exclusive to the domain of the distillery shop. The only exception I can recall is the 18 year old Cognac Finish. This was specifically for the North American market although I did manage to pick one up on a trip to Florida. A more generally distributed 20 year old Oloroso expression was released in November 2015 and is limited to around I believe 8400 bottles. This is your opportunity to experience the finer side of Deanston.

By now I expect Deanston is the most widely reviewed whisky I have here at Whisky Rover. That’s not by design, rather frequent trips to the distillery revealed new exclusives and whilst I’m not criticising both the 12 year old or Virgin Oak, both of which are solid examples, once you’ve experienced the Toasted Oak or Spanish Oak you’re somewhat stunned.

These are sadly long gone much like the KLF’s discography that has been deleted. We’re not talking Ardbeg or Glenmorangie style ‘limited editions’ of 60,000 units, which isn’t limited in my realm of numerical beliefs. Rather less than 1000 units. Yes, now that’s limited, hence the need to keep it exclusive to the distillery shop.

So now then, here’s your chance to experience the more limited side of Deanston with a larger outturn than just a handful of casks. This release was matured for 20 years old in ex-Oloroso sherry casks unlike the recent 7 year old I reviewed, which was only finished in such a cask. It remains like all Deanston releases being unchill-filtered, natural colouring and is bottled at cask strength of 55.3% ABV, retailing at £110. 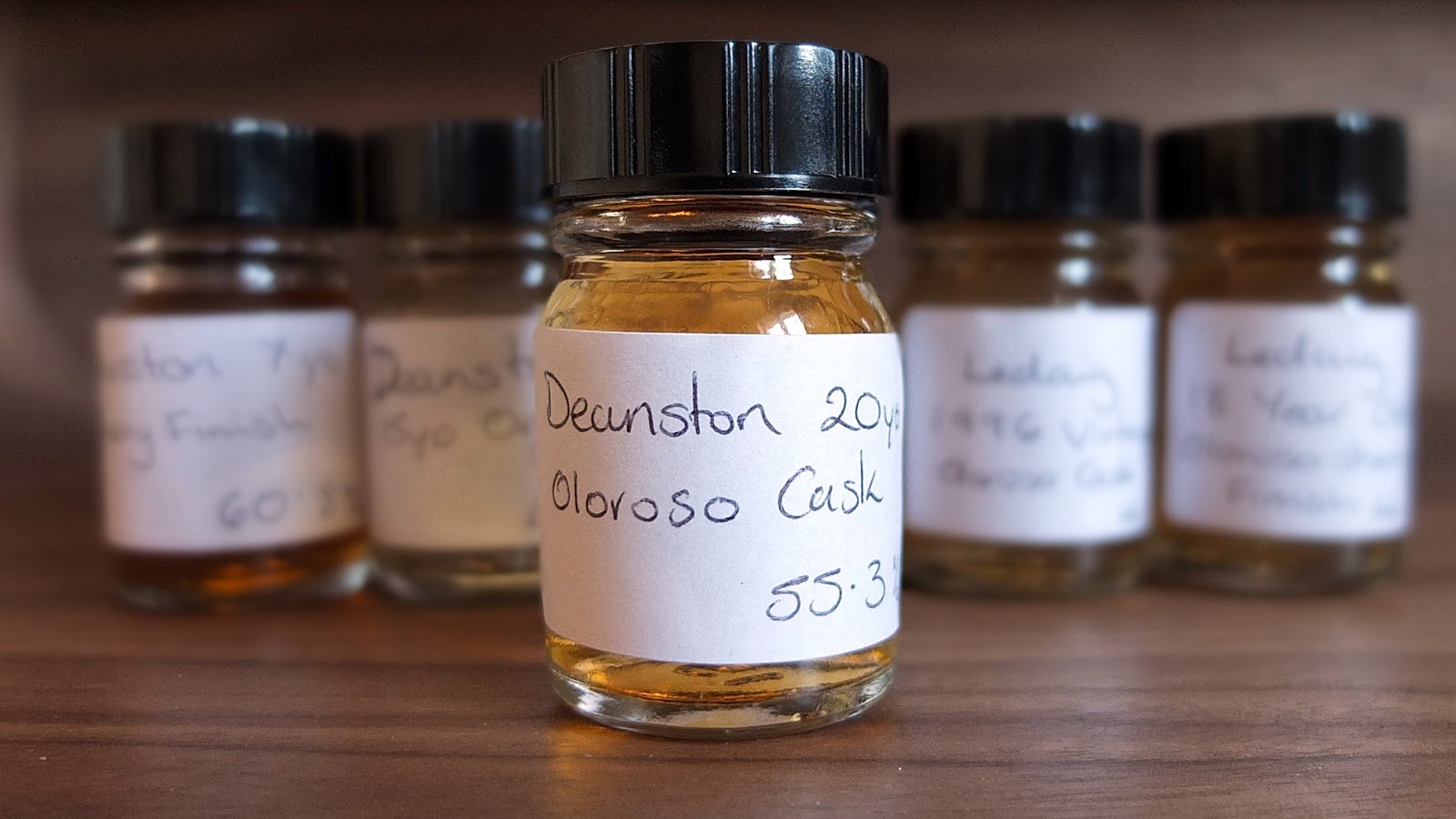 This sample was kindly provided by Deanston for me to review, but it’s more than likely I’ll be picking up a bottle in due course. Having just shelled out on a octave cask to support the Dornoch Distillery crowd funding initiative, the sample is welcome as I’ll have to live quietly for a year month a few weeks at least. Time for the review!

Colour: a rich butterscotch
On the nose: plenty of character here with the sweetness of honey blended with cinnamon, black pepper and cloves from the cask. Caramel, a slight rubbery quality (which I enjoy), plenty of butterscotch moving into those toffee Poppets sweets. Ginger nuts and an almond frangipane tart. Throughout there was an aspect I couldn’t pin down until it came to me; marshmallows. Water brings out more of an orange fruity dimension.
In the mouth: golden syrup and a little treacle with plenty of nutty characteristics. A fine dark chocolate, cinnamon and more of that Deanston honey reside in the glass. I’m thinking cherries as well, assisted by nutmeg, all-spice and black pepper. Again a little rubber, which might not be to everyone’s taste as some are sensitive to such a feature, but to me its just an added dimension to what is a buoyant Deanston orchestra.

Very well rounded and balanced. It is in reality the little brother of the gorgeous 1974 Oloroso cask, which is on sale at the distillery for £950 although just a handful remain now. In comparison this wee fella is more affordable.

The 20 year old Oloroso is thoroughly enjoyable and attractively priced. In some ways I’m taken back to the Macallan 18 year that retails now for around £150. Both similar in age, the Deanston is effortless and provides the more complete experience with change left in your pocket.

I’ve had a bottle of the Deanston Spanish Oak for too long now so it was about time to re-experience this distillery exclusive partially prompted..