The next entry in the 1st year of the trio of Eden Mill spirits is the Burns Day 2016 edition.

For those new to Eden Mill or unaware of what this distillery is actually doing having established itself initially with beer before moving into gin and then whisky. It’s worth looking around Whisky Rover.

I’ve been tracking the development of a trio of new make spirit releases since these editions were released in very limited quantities. Since then as an owner of the original new make releases we have the option to purchase again at each annual anniversary until its officially called whisky. What made each of these new make releases interesting was the use of different malts within the spirit. It was almost as if the team was trying various types to develop their own style of new make. Fascinating potentially, these editions allow us to track the development from the still to the consumer over time.

Take for instance this Burns Day release which I reviewed here as a new make spirit and you can see both pictured above. We’re now a year further on, so we can gauge the effects of that American virgin oak along with the mix of malts utilised. For the record this spirit features golden promise, crystal and brown malts. The St Andrews Day equivalent was matured in French oak whereas this has relied on American oak, so again we can look to make some interesting comparisons. It is bottled at 43% strength in 20cl bottles available at the distillery for £20. 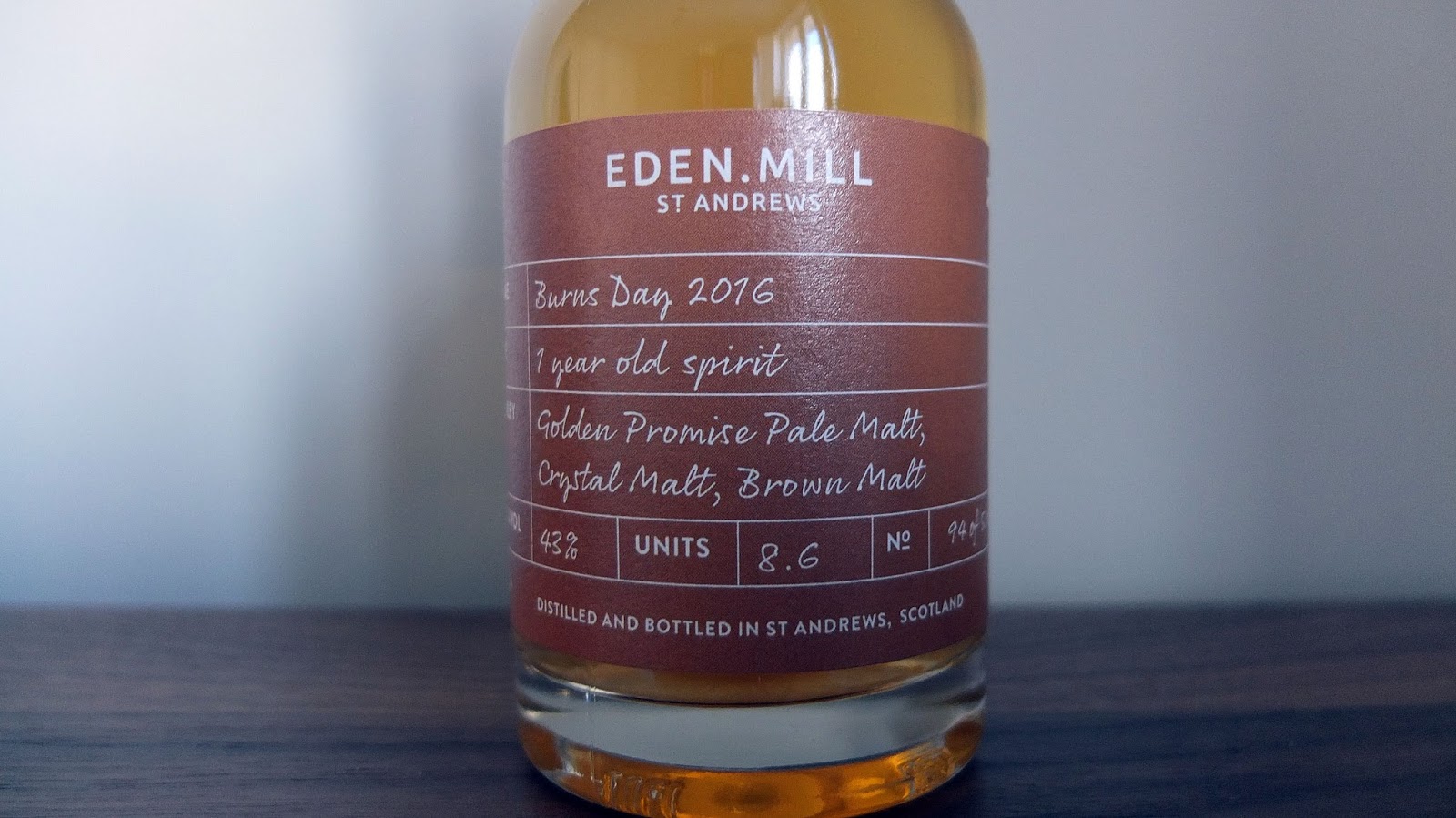 Colour: a pale straw, very light
On the nose: punchy up front with an almost effervescent quality. I’m thinking toffee apples and a herbal aspect. Caramel wafers and lashings of vanilla. There’s a floral perfume aspect and digestive biscuits. Left in the glass to air a little more and ground coffee beans come through.
In the mouth: now this is interesting, unlike the 1yo St Andrews Day brethren this is much lighter in the mouth. Entirely drinkable right now. It doesn’t have too much depth yet though, which is to be expected or a finish. The wood has injected vanilla, dill and to a certain degree coconut. Yes, much more relaxed with some floral notes but not to the gin-like-degree of the St Andrews Day release. With water the fragile elements are exposed and not recommended. Reflecting on the characteristics I’m reminded of an Ovaltine drink!

Overall: I do prefer this over the St Andrews Day release as it feels less turbo-charged by the wood itself. Here the virgin American oak displays more restraint working with the spirit on a more mellow level of interaction. The upshot being it’ll need more time in the cask to maximise its potential. The suggestion of this spirit is a very light, easy drinking and inoffensive whisky.

We’re almost reaching the end of these 1 year old spirits with the Hogmanay just left to review and yes that’s coming very soon on Whisky Rover; don’t say I’m not good to you or afraid to put my hand in my pocket.