During our residency at Tormore distillery as part of the 2016 Spirit of Speyside Festival we had driven past Ballindalloch several times prior to our actual visit. Set just off the A95 there is no mistaking its purpose or intent as you can see from the photograph above. It makes a statement and the tour itself, well read on.

As a Single Estate Distillery, Ballindalloch is bespoke and refined with a sole purpose to produce an excellent whisky. Prior to 2011, the 1820’s steading was falling into a state of disrepair and had become an eyesore on an extensive estate. Fully aware of this visual blemish, Estate owners Clare and Oliver Russell, realised that action had to be taken. It is not possible to assist in the natural decay of an old structure, a new purpose was sought and as there was a history of distilling on the Estate why not a single malt whisky distillery? The family had previously had an interest in the nearby Cragganmore distillery until 1965.

Work commenced in 2011 and employed local craftsmen wherever possible to ensure the integrity of the build and renovation; a principle effectively instigated by Francis at the Daftmill distillery in Fife. The project took two years to complete and the results which you can see in this article and in the coming weeks on my Whisky Rover Instagram Channel, are very impressive and indicative of the care and attention to detail outside and within. 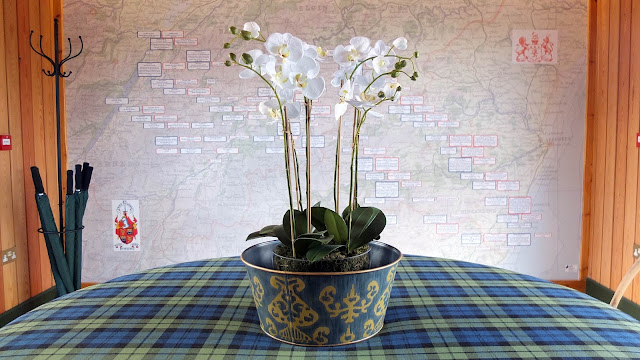 We had joked as a group prior to our arrival that for such a small distillery, a tour in excess of two hours seemed laughable. What exactly was the tour going to focus on during this time frame? Were we to be employed as workers for a couple of hours? These preconceptions were founded upon our distillery tours elsewhere. Having visited in excess of sixty plus distilleries (I’ve given up counting nowadays), my anticipation as a visitor was soon to be blown to smithereens. This revolutionary experience started with a warm welcome from Oliver Russell before we then met Brian Robinson, who as the distillery host would lead us through Ballindalloch distillery.

Before venturing into the production area, our small group enjoyed an informative introduction to the distillery in a rather plush bespoke reception area complete with a cup of Earl Grey tea and cake. Immediately I felt relaxed and pondered whether at last I had found a distillery experience my long suffering wife would enjoy? Such was the warm welcome that you immediately felt at ease with the staff and members of the group.

Walking across the small courtyard towards the production side of the distillery, Brian highlighted the original wall and the modern internal version; it was impossible to tell the difference. Refreshingly photographs are encouraged at Ballindalloch, this is as it should be compared to other distilleries that ban photography. Hence why I have far too many photographs of Ballindalloch to accommodate in one article. It would be too predictable to post a series of photographs featuring the stills, washbacks and mashtun. There is another dimension and beauty to any distillery – especially Ballindalloch – which I’ll try to visually transmit with an unusual selection. 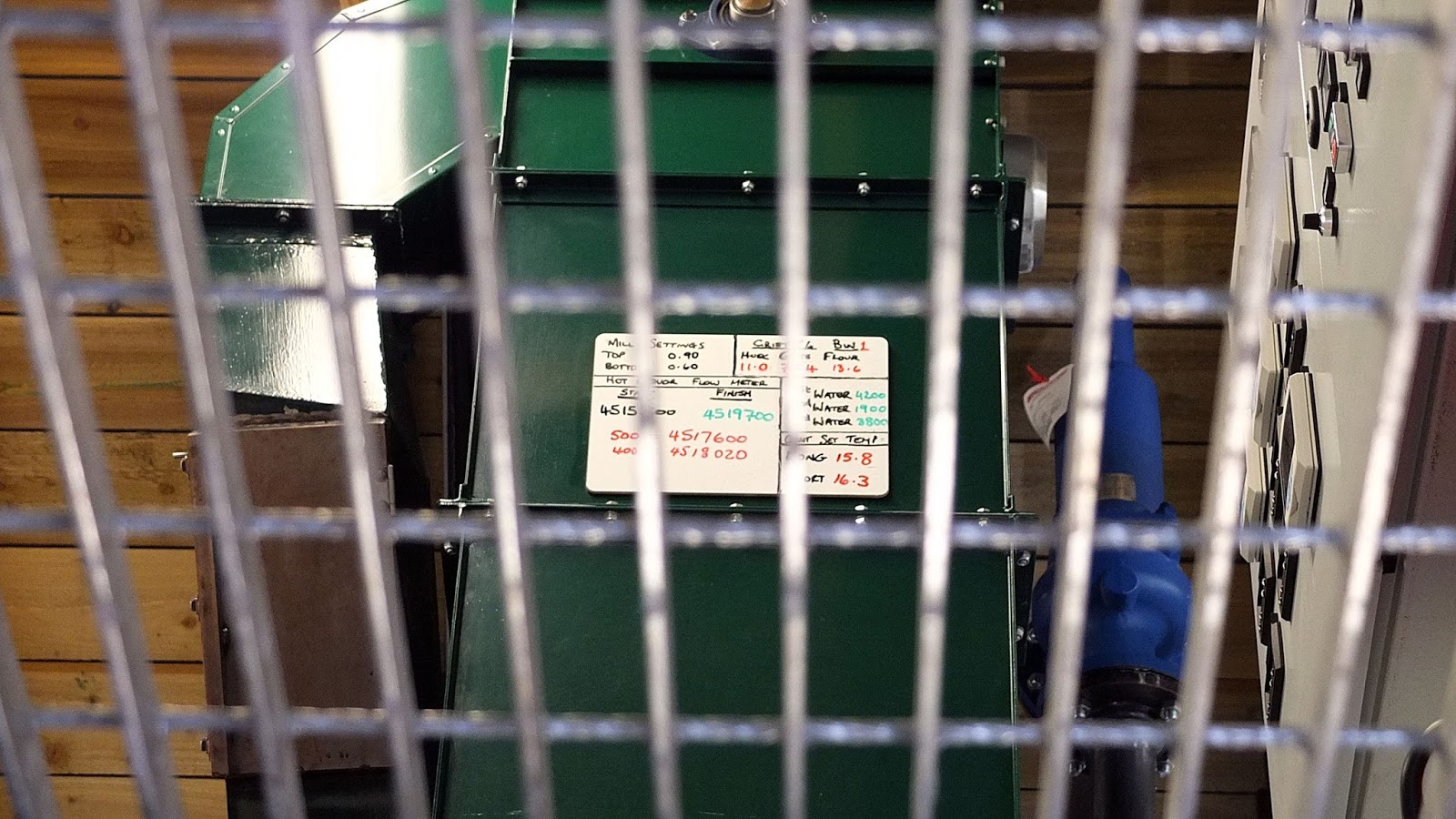 The production is split on two levels with all of the equipment on the upper level except the mill on the ground floor. By nature a distillery tour would take in each stage, complete with the standard dialogue and then move on as quickly as possible. Not at Ballindalloch, refreshingly Brian encouraged questions and allowed us to participate in the production process. Before long, members of our group were moving levers under the watchful eye of Mike who is the current apprentice onsite. In retrospect a group preconception was coming true but in a fun and engaging way.

Moving upstairs a rather splendid cooper mashtun complete with dome greeted us. Then onto the four Oregon pine washbacks that could have heralded a rudimentary conversation regarding their use and fermentation. Instead we were set to work mixing the distillers yeast, as the next stage of the production process commenced. 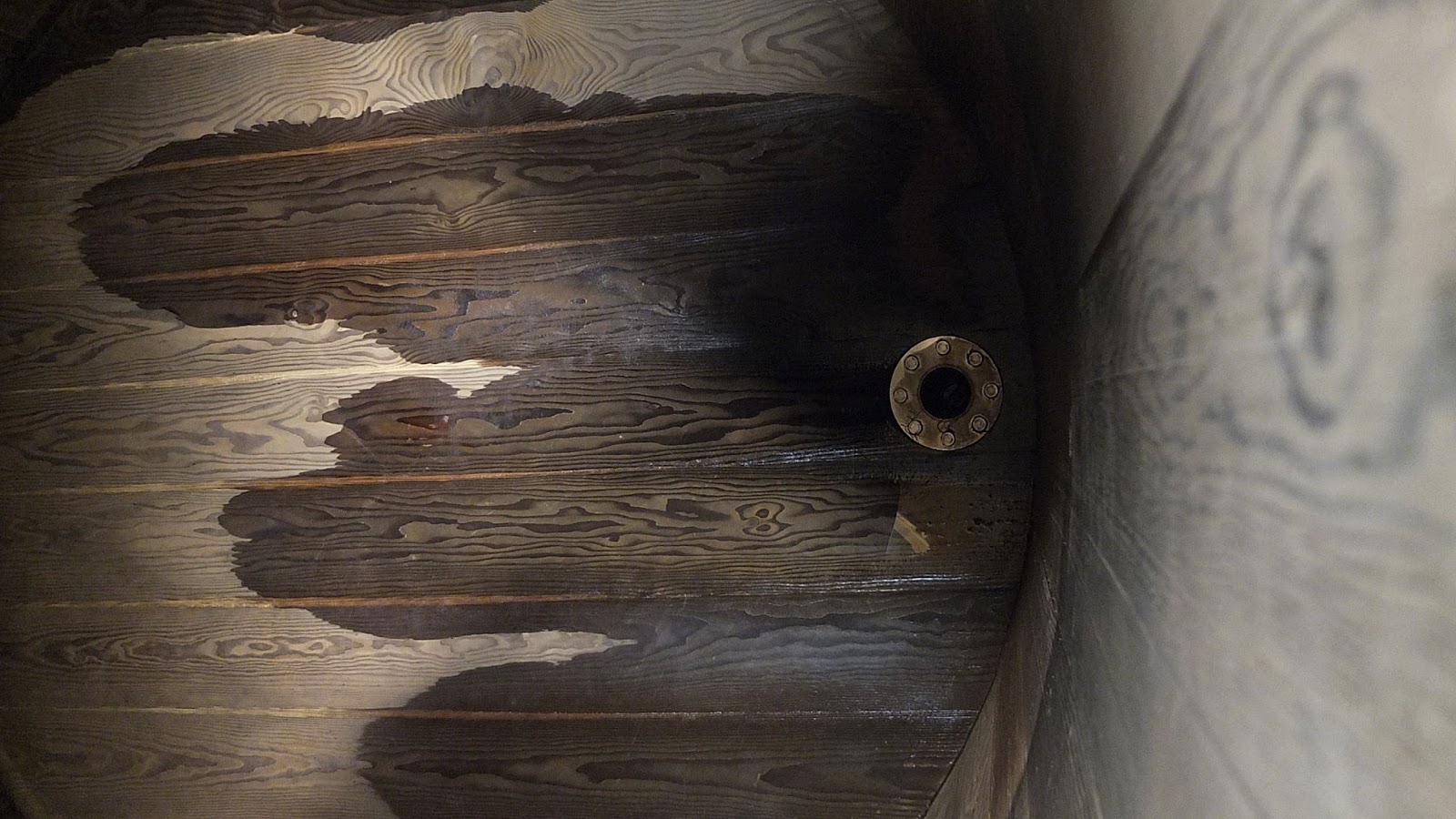 Mixing the yeast certainly brought a new dynamic to the handcrafted nature of whisky and our group were arguably not the greatest exponents of the required technique. Eventually, we met with success and walked across to the two stills where Colin the distillery manager was working, but glad to answer any questions we raised. I did venture to ask what attracted an industry veteran to such a project as Ballindalloch? ‘To make whisky’ was the reply, highlighting the lack of automation and computerisation throughout the Ballindalloch process.

Both of the stills are connected to two wooden worm tubs that you can see clearly on the first photograph, on the left hand side. The use of these will help the team create a whisky of the highest quality and as I think of some of my favourite distilleries, worm tubs are often a feature.

I have a growing concern with all these new distilleries in Scotland that we will witness a new whisky loch developing when they reach three years and a day in age. The need to unleash a new revenue stream for many is quite apparent and several will follow the recent example of Wolfburn distillery. Brian outlined that the plan for Ballindalloch is to debut at 7-8 years of age when in theory they are happy with the whisky. The whisky will be granted the necessary time. Producing just 100,000 litres per year, he is already acutely aware of the need to manage the inventory and the increasing expectations from anyone visiting the distillery. Much like Francis at Daftmill, Ballindalloch will be worth waiting for I’m sure. 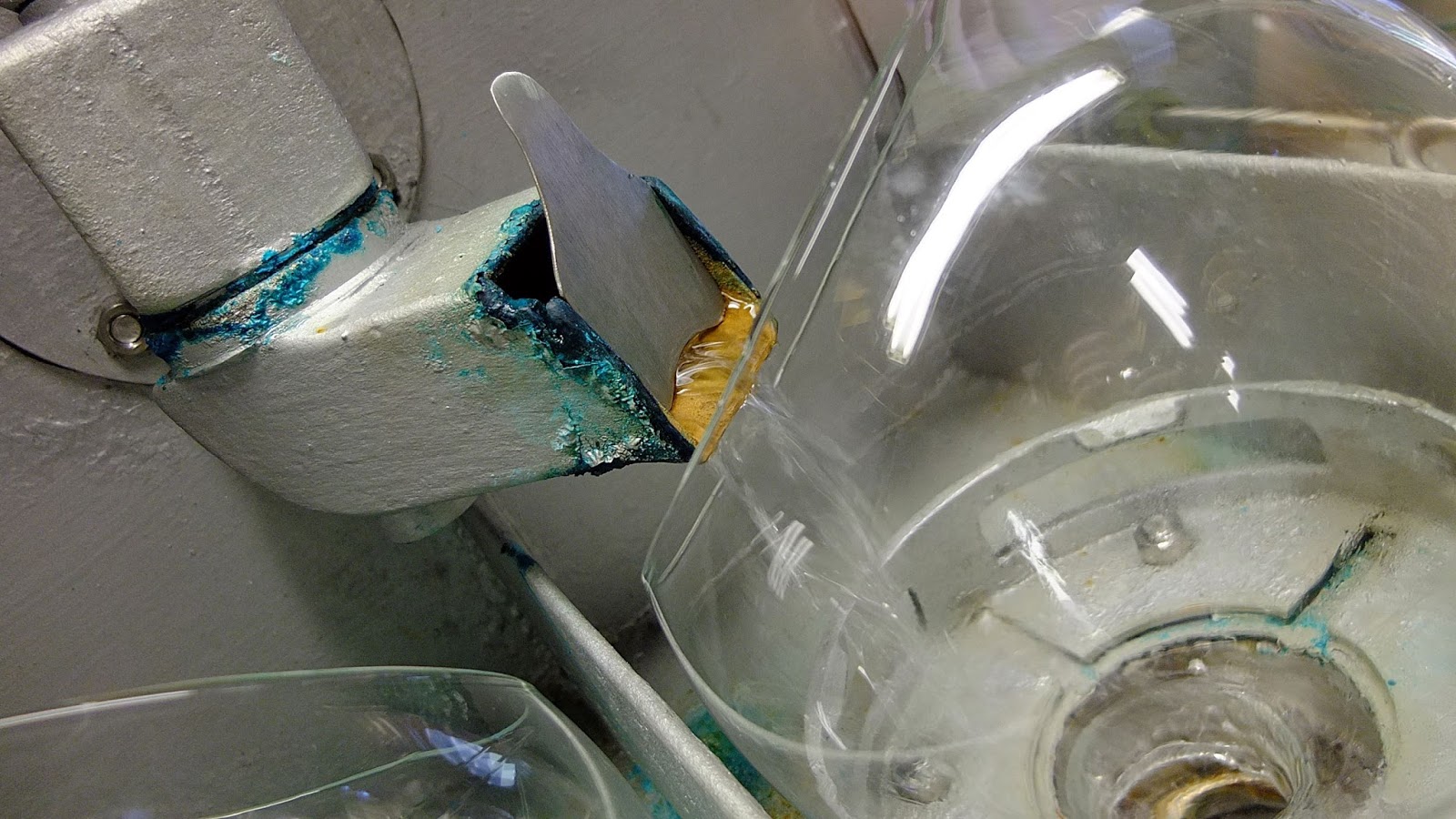 Before departing it is worth mentioning the Spirit Safe which was formerly at Cragganmore distillery and kindly donated by Diageo to Ballindalloch. Little is known about its background but the team felt it is from the 1950’s and has been graced with a bespoke wooden stave finish courtesy of the local joiners who clearly enjoyed working on site; a photograph for another article.

Back on ground level beside the spirits and feints receivers, we moved onto the cask filling area. Before entering the initial warehouse which is now full of maturing casks. A second warehouse has been established since 2015 nearby and casks are transported weekly for the long wait.

I’m pleased to report that the warehouse is in a tradition dunnage style continuing the theme across the distillery. Also in use are cask stencils rather than the godawful barcodes I see on some site visits. It’s a small touch but the devil is in the detail as the team here seem to fully understand. 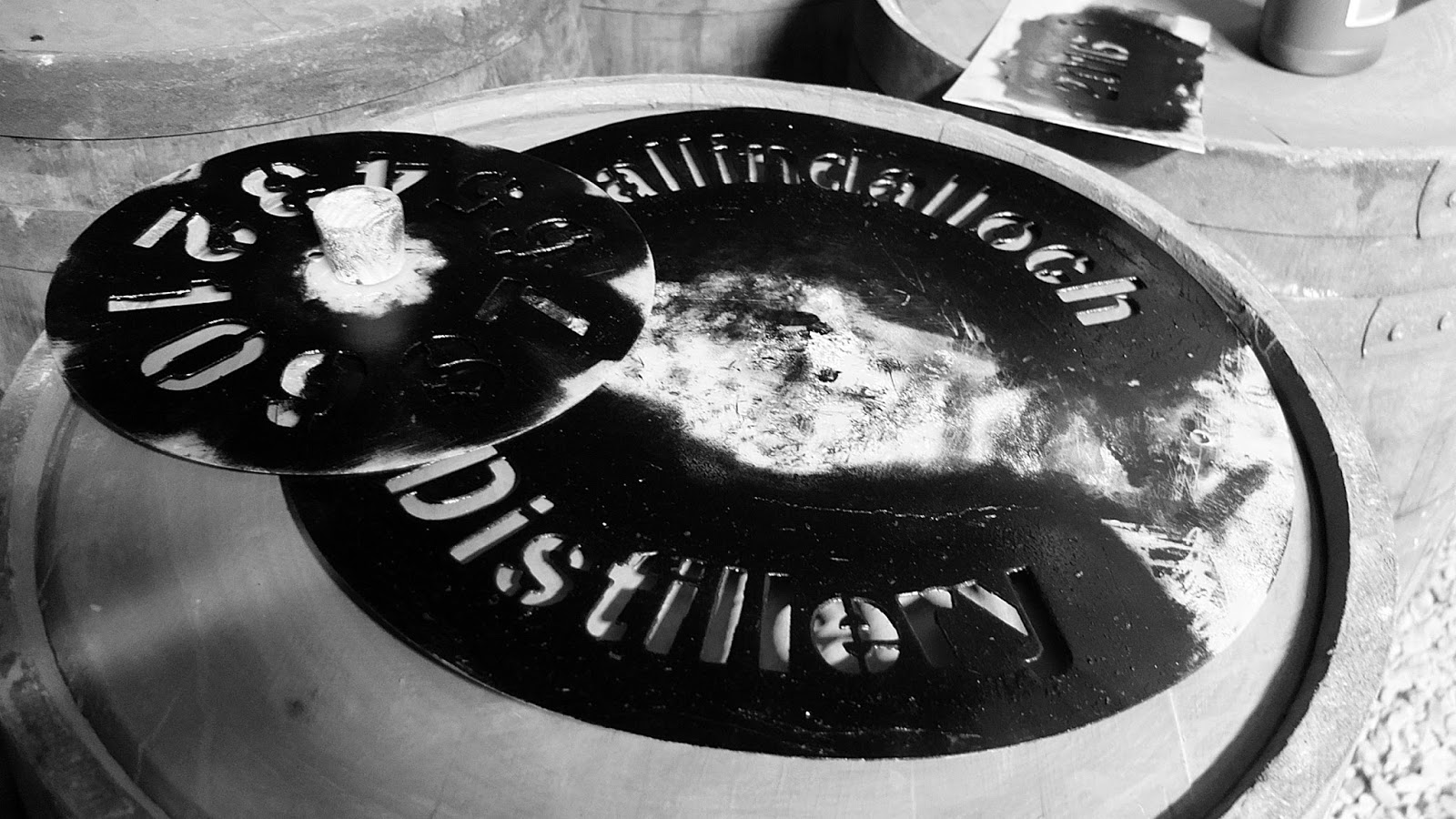 For a new distillery this would spell the end of the tour with guests being deposited in the shop to purchase their new make spirit or merchandise. Ballindalloch has no distillery shop to speak of currently. Instead we were taken into the tasting area and shown the corporate entertainment lounge. Impressive, especially the magnificent collection of Wemyss Ware; living in Fife I appreciate such a fine display.

Brian then teased us that the owners of the distillery having once had links to Cragganmore distillery, enjoy an agreement where they can purchase a private cask for their own enjoyment. This arrangement and the kindness of the owners meant that our group was about to sit down with a trio of vintage Cragganmore whiskies from their selection of private casks. A real treat and one I shall keep for the next article, as being the designated driver I had to watch others enjoy these whiskies in this luxurious environment. Thankfully I departed with a trio of samples and a bonus Ballindalloch new make spirit taster.

I would like to say many thanks to the Ballindalloch team for their warm welcome, hospitality and outstanding distillery tour.  After this experience it comes as no surprise that they received the 2016 Icons of Whisky Award for Craft Producer of the year. The benchmark in tours has been raised and I’ll be returning for their Art of Whisky Making experience as a birthday treat to myself later this year. 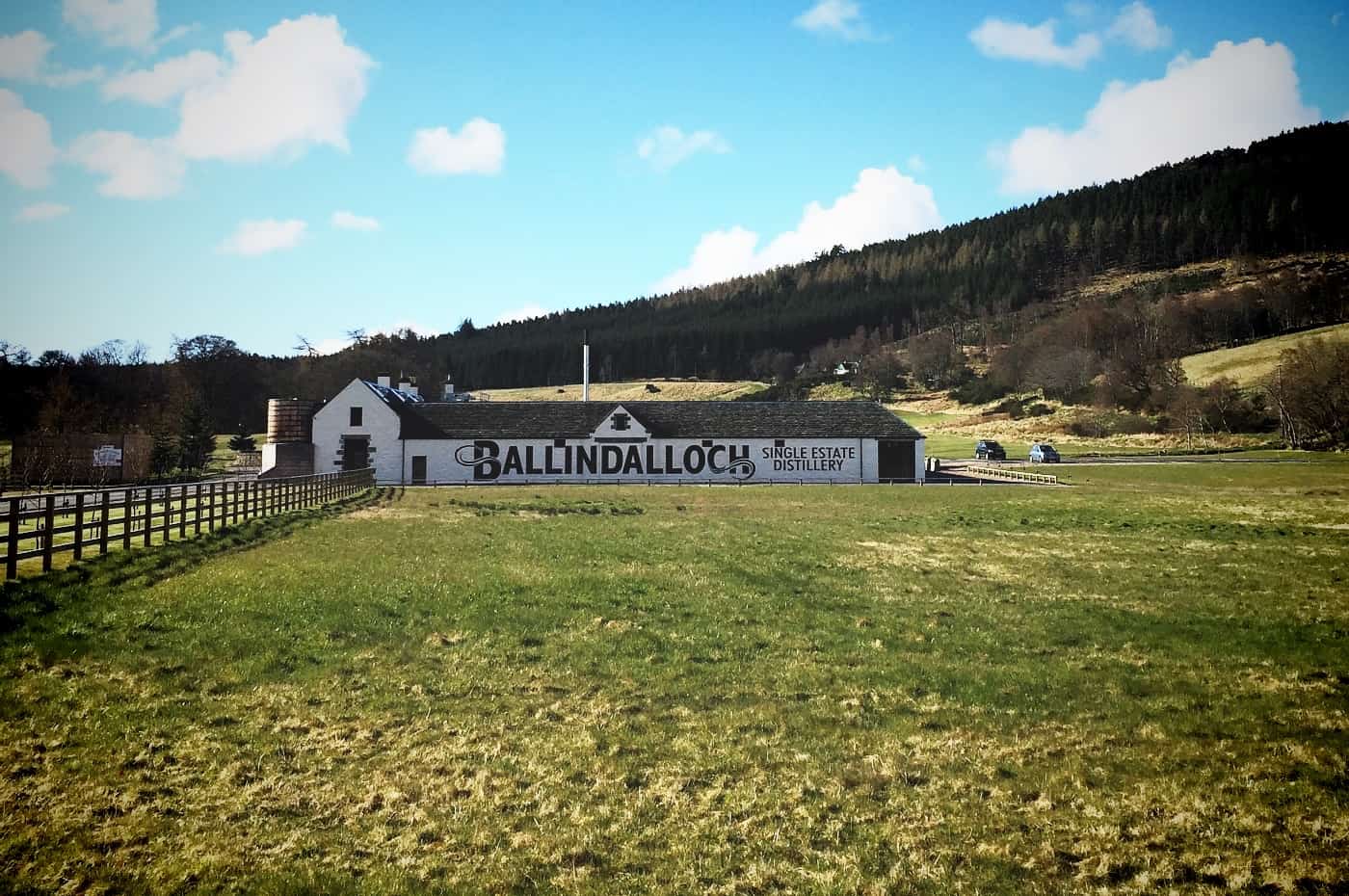 Ballindalloch The Art of Whisky Making

A Tour of Ballindalloch Tasting