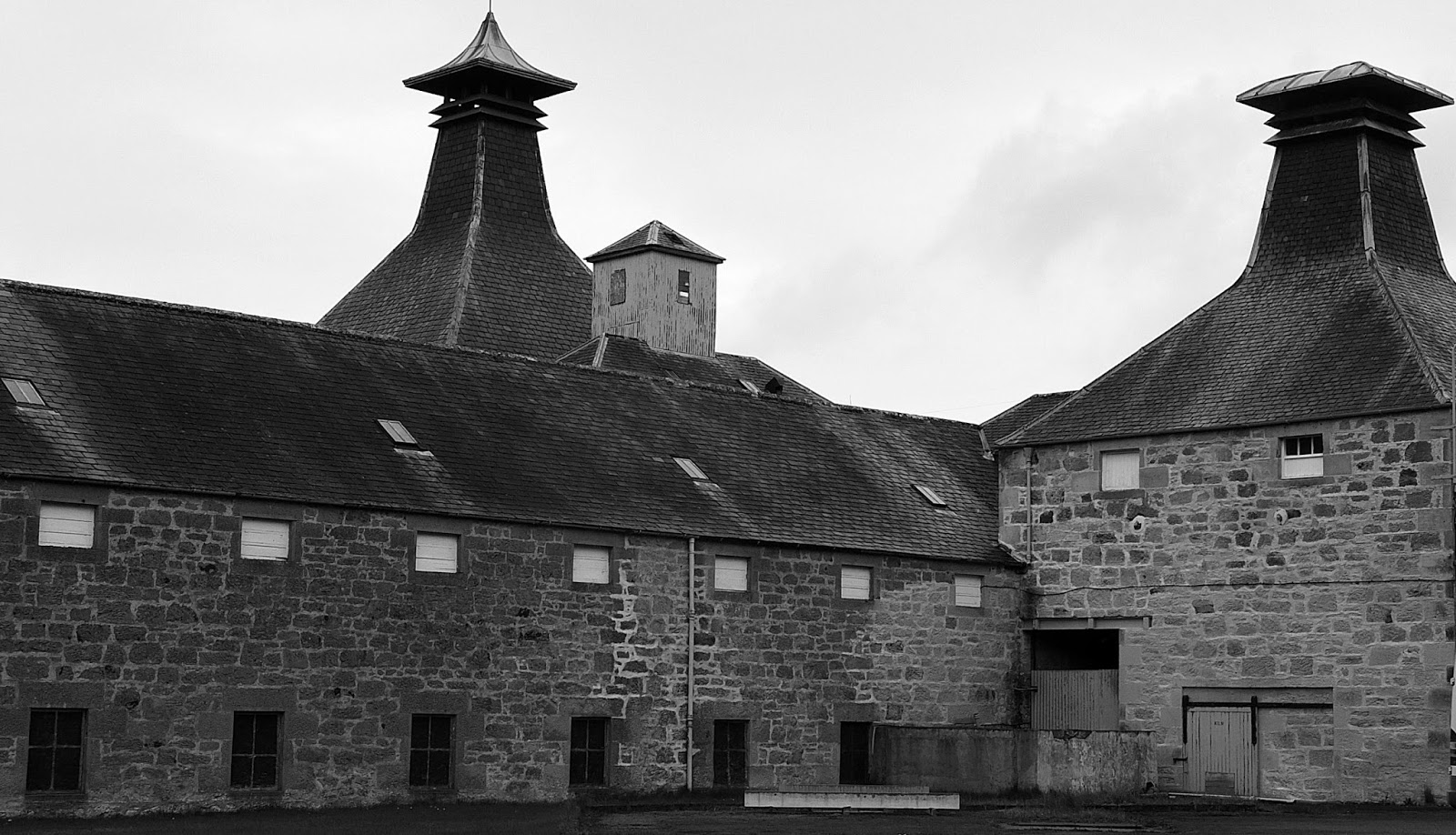 This Murray McDavid event as part of the Spirit of Speyside 2016 whisky festival was a golden nugget of a find during our residency on Speyside. It combined several of my favourite things in life; namely a closed distillery, a whisky tasting, an in-depth dunnage warehouse tour plus it was free!

Whilst the there was no tour of Coleburn distillery itself, which closed in 1985, we were allowed to explore the outside that remains intact and of the period. Traditional buildings are plentiful as is the sense of a bygone age. Here time stands relatively still waiting for whisky to mature in the Victorian dunnage warehouses that Murray McDavid use today.

Murray McDavid were established in 1996 as an independent bottler of whiskies before being taken over by Aceo Limited in 2013. They are one of the principle exponents of using casks to enhance the dimensions and characteristics of the whisky. This approach is called many things and whilst I have had some dubious cask finishes (not from McDavid it must be said), I remain open minded about the possibilities and results it can deliver. The team here have sourced a variety of casks including wine barriques from across Europe and the best that Spain and Portugal has to offer. On site are bourbon casks from the States, as expected but also more unusually rum barrels from the Caribbean and the warehouse did harbour vodka in casks. The Dunnage Warehouse Tour event allowed visitors the opportunity to taste the results of Murray McDavid’s endeavours, but more of that later on.

Today on the Coleburn site Murray McDavid have thousands of casks and over 80 different single malts all waiting for the right moment. They also provide cask management to private individuals or groups upon request. The tour was hosted by David Simpson who is head of whisky creation and offers decades of experience within the industry including the recent relaunch of Tullibardine whisky. 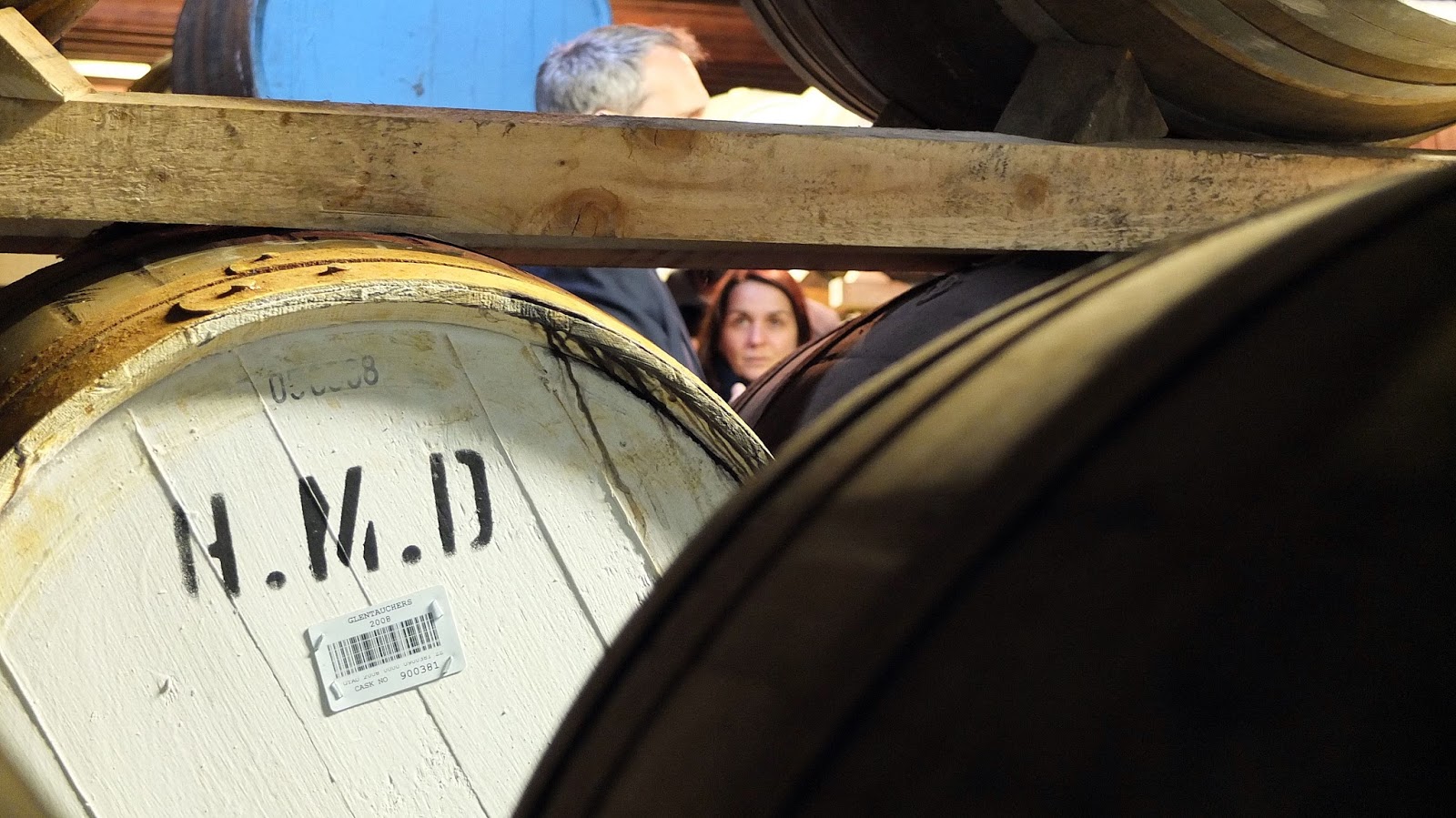 After a short impressive film we were led into a nearby dunnage warehouse where David gave us a brief introduction. Then surprisingly, we were left to explore the top floor in our own time; seeking out casks and distilleries. The warehouse is my most favourite aspect of any tour especially when you’re in a more traditional setting. During this idyllic exploration, David fielded questions from the group and told a few interesting and humorous tales of bygone whisky on the job moments. These much like footballer tales are of interest to enthusiasts as they show a different side to the industry and one we hear so little about nowadays.

After exploring both floors of the warehouse we headed over to the tasting laboratory where the Murray McDavid team piece together their releases for public consumption. The range as it currently stands is now split into 6 different categories and I’ll quote their own literature here:

I’ll say a few words about the branding as on Speyside we did engage with several independent bottlers and at times the image and bottle design seemed very haphazard. For instance we participated in a tasting with one independent where even their representative struggled to read the tiny label on the bottle – if that doesn’t show a design flaw then what does? Overall my group #theTormore4 were impressed with the use of colour and information provided by the current Murray McDavid range. It’s informative and distinctive without the need for forceful branding or characters. As our own Tormore private tasting showed (offering a range of bottles from the 1970’s till the current day) keep it simple when it comes to design. 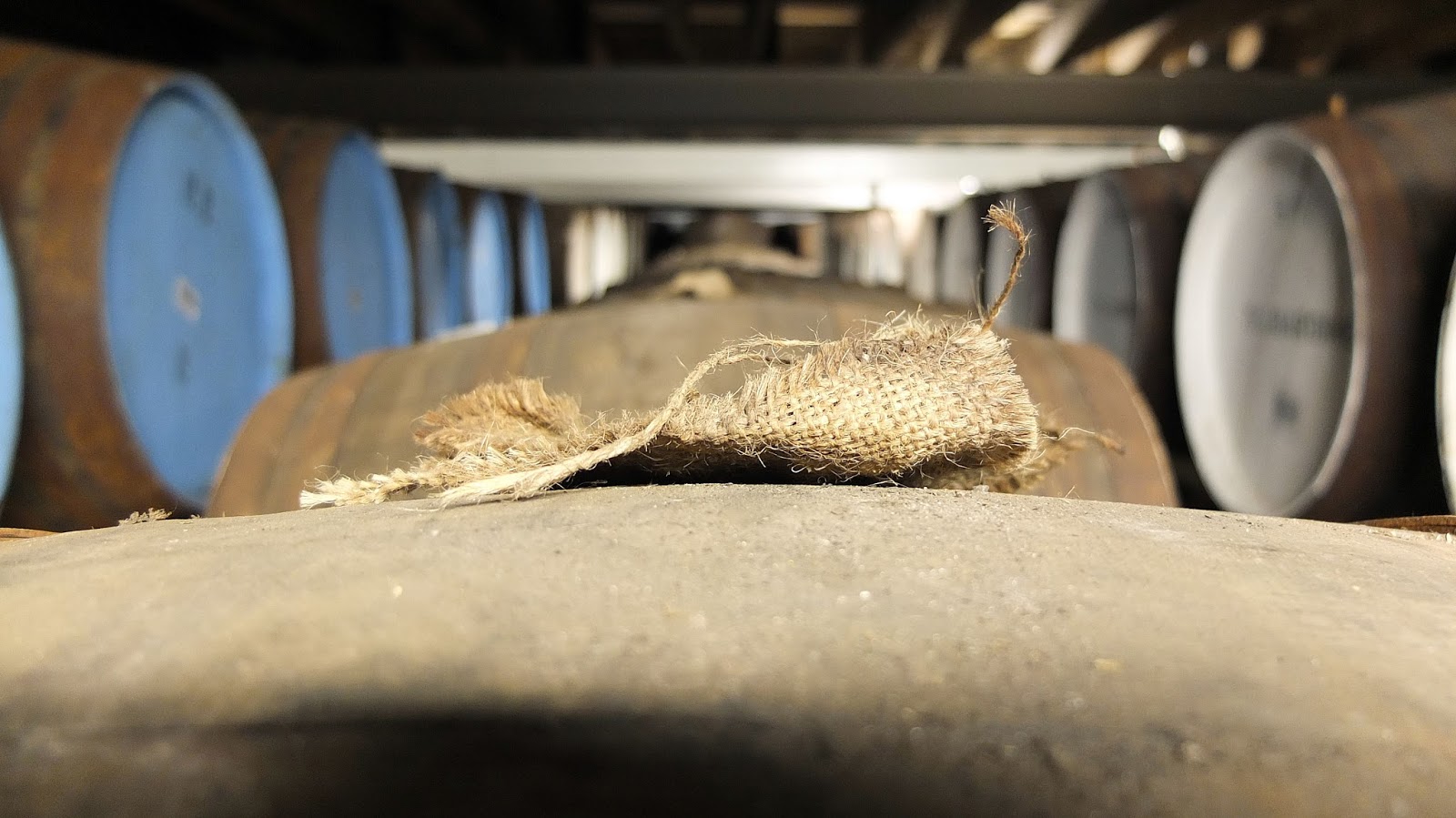 Within the company testing laboratory, David presented a generous range of bottles and then left it up to us to sample these on our own time, whilst taking the time to mingle with attendees. A very relaxed and informal tasting soon developed. Also on offer was a generous distillery discount if we wanted to purchase any bottles on site that day. My own group left with a couple of bottles per person, as we were very impressed by what we had experienced along with the asking price.

For the record my own purchases were a crafted blend in the form of Righ Seamus II and a vatting example as Peatside. I intend to review these at a later date so do watch out for these online. Both nosed enticingly and met with positive comments from #theTormore4. As the driver for the Festival, drinking was not permitted although I’m sure some other groups may have had a little tipple along the way. Instead Adam was kind enough to pour a couple of samples to take away and experience at a later date. This is what I’d like to do now with a tasting of five Murray McDavid releases from the event, starting first with something from their select grain range. For more information and convenience I’ve linked each bottle to the specific Murray McDavid site page. 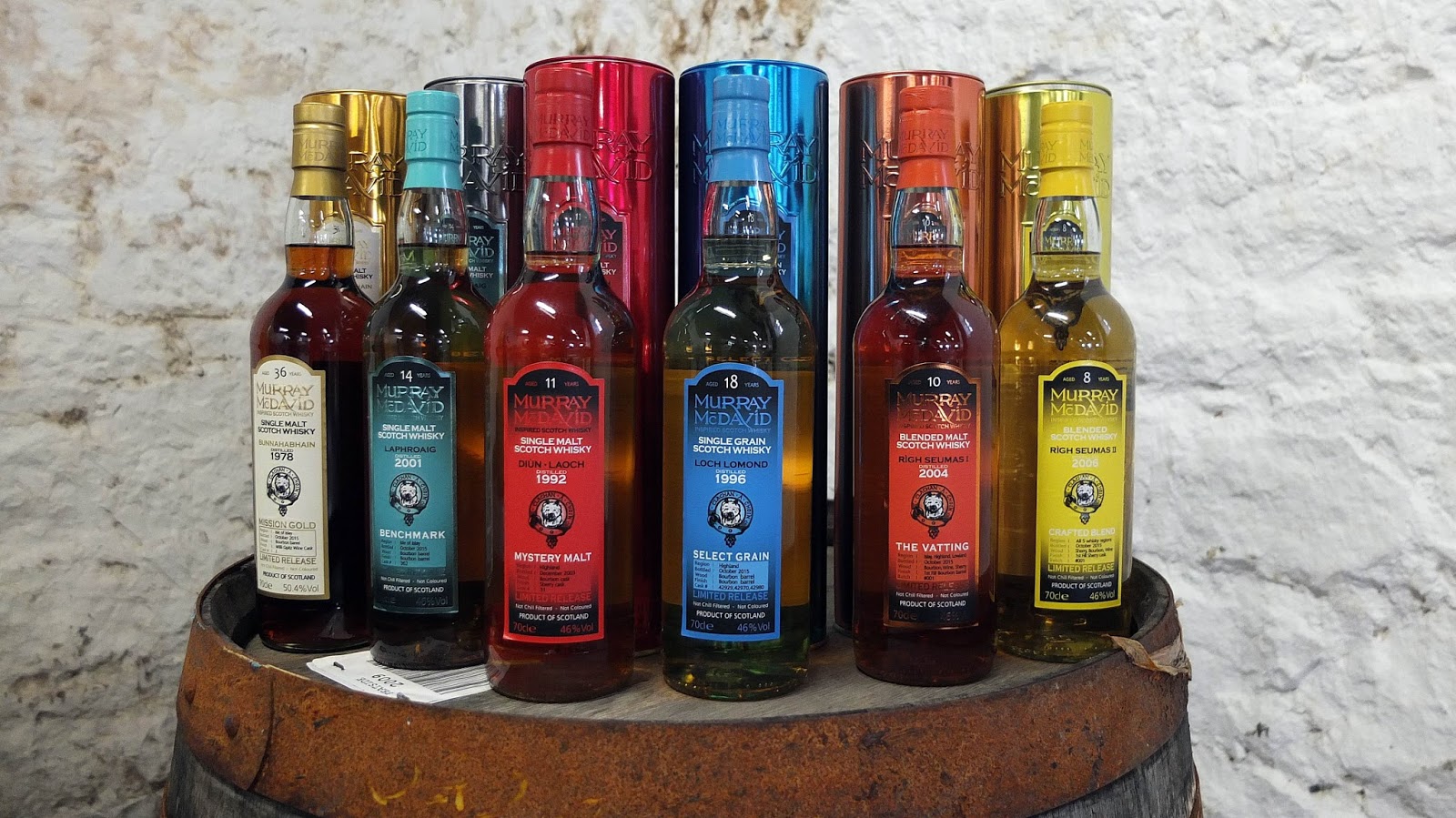 Colour: a sun drained sandy beach
Nose: apples and sherbet with coconut and white pepper. An element of wine gums and marzipan. Almonds certainly, the sweetness of white chocolate and vanilla icing.
Taste: more vanilla and overly ripe pears. Some apples and sugared almonds with lashings of fresh cream.

Overall: a light and inoffensive grain. It certainly has benefited from the bourbon fresh cask for 8 years that has pushed on its development. One for a summer evening without too much effort required or someone new to whisky wanting to size up the spectrum of possibilities. I do prefer the Signatory Ayrshire grain which I reviewed recently but these younger grains show more value and character than a tanker full of the Haig Club.

Colour: Pinot gris
Nose: a real whitewash this one with white pepper and grapes. Almonds and crackers with the sweetness of cream soda. A twist of lemon. I’m left with the aroma of a Tunnock’s Snowball, which for those who’ve yet to taste this Scottish delight is marshmallow wrapped it chocolate and coconut flakes.
Taste: a decent quality vanilla ice cream complete with a wafer. More crushed grapes and sweetcorn. Black pepper leads into a mellow char finish.

Overall: this is from their mystery malt range so you can speculate which distillery, or Speyside distillery it comes from. I actually know which one and as such it is an easy drinking Speysider. Perfect for a sunny afternoon, which it is right now as I type this.

Colour: caramelised brown sugar
Nose: resin and cinnamon combine with a little bit of rubber – it wouldn’t be Glen Scotia without this characteristic! Orange peel, cherries and cranberries arise with all-spice and a nutty chocolate brownie.
Taste: more dark chocolate, no Jaffa cakes with that richness and orange layer. The rubber is poking around but not forceful compared to other Glen Scotia’s I’ve experienced. Instead its more mellow with cloves, ginger, red berries and a woody ginger presence.

Overall: an interesting concoction as the dirty dirty nature of Glen Scotia has been given a wine twist. In doing so its not as forceful or brutish and has a refined elegance to it. Lighter and less chewy on the palate as well.

Colour: molten caramel
Nose: caramelised peaches soaked in rum, fruit loaf with all the spices and home made orange and ginger marmalade. Golden syrup and pancakes.
Taste: a lovely silky texture leads into oranges and ginger snaps. A twang of rubber bands, some lovely sugar work, cranberries and a red pepper dip.

Overall: very drinkable at 46% and possesses a certain richness on the palate. It tastes like an exclusive treat and is priced accordingly.

Colour: a golden rich honey
Nose: the sharpness of raspberries initially then dissolving into a rich aroma. A mossy undergrowth and sea spray act as seasoning. Cinnamon and candied oranges cut through the dirty vanilla and beef jerky. Red liquorice yes and a buttery richness of freshly risen puff pastry.
Taste: strawberries dipped in chocolate with a creamy and peppery concoction. Adding water helps open this elegant whisky up greatly. Shittake mushrooms arise with roasted coffee beans and a fine Ceylon black tea. Given time a pan fried venison in a blackberry sauce takes centre stage. The finish is a long wistful bitter dark chocolate note.

Overall: upon tasting its not a surprise Murray McDavid have given this Bowmore a place in their elite Mission Gold range. Far more elegant and poised then most of the current official Bowmore range this is a real talking piece. It’s certainly benefited from the wine barrique and has greater complexity but is out of my price range sadly.

A real spectrum of whiskies just from these five reviews that came after a fantastic and informative tour. A different approach to cask management across the range certainly has provided much variety and talking points. Watch out for my reviews of Murray McDavid’s Peatside and Righ Seamus II in the coming weeks. These bottlings will show more of their blending approach with a vatting and crafted blend being covered. I’m quite impressed, so I may purchase something else…

Following an enjoyable visit to the Murray McDavid warehouses at Coleburn distillery as part of the Speyside festival. It only felt right that I should..

Murray McDavid & the Art of Blending

We’re doing things in reverse at Whisky Rover to kick off the Spirit of Speyside Festival coverage by starting with the last event I attended..

For the second year running, on our Spirit of Speyside Festival Super Sunday, we headed towards Huntly to pay homage to GlenDronach. Last time..