This is an overdue return to the German supermarket chain Aldi and their Glen Marnoch whiskies. This labelling forms their range of releases that currently encompass the Islay, Speyside and Highland regions with the odd age statement special version.

I continuously review such white-label supermarket releases and the more popular blends under the supermarket whisky search. It’s an extremely popular end of the market and one often overlooked, or arguably looked down upon by single malt snobs. The Glen Marnoch releases are labelled as limited editions and tend to be annual releases across Aldi’s UK stores. Once they’re gone that’s, unfortunately, it for the remainder of the year. If word gets out about an above average batch, then sometimes you do have to be quick however this trio of Glen Marnoch’s are available in decent quantities currently. You can read what I thought about the Glen Marnoch Islay Edition which offers a solid experience for the asking price in today’s fashionable peated marketplace.

In saying this, when I purchased this Highland version for the impressive sum of £17.99 it was the last example from the region on the shelf. Let’s stop for a moment and consider how many other single malts you could pick up for under £20 that wasn’t a blended Scotch i.e. include grain whisky. Yes, there isn’t an age statement here but it is still a very attractive price and removes the possibility of grain whisky being present in the bottle. Now don’t get me wrong fellow enthusiasts as I’m a big fan of grain whisky, but when it is to such a high proportion and an industrial youthfulness as seen in the Famous Grouse Smoky Black it does become detrimental. This Highland release is a single malt whisky so we know its made from barley rather than grain and comes from a single distillery.

There is an evident squeeze at the lower of the market currently with bourbons making their impact felt and the big players looking to reduce costs often at the expense of flavour. The Famous Grouse Smoky Black tends to occupy the £15-£20 bracket which is the more premium end of the general blends. Compared this to the enjoyable if limited Scottish Leader whisky or Lidl’s Queen Margot Blended Scotch and there is plenty of scope and variety if you only have £20 to visit a local supermarket. A single malt whisky could be a viewed as a treat to drinkers and not crossing that £20 barrier is an important demographic, as well as an oddity nowadays. 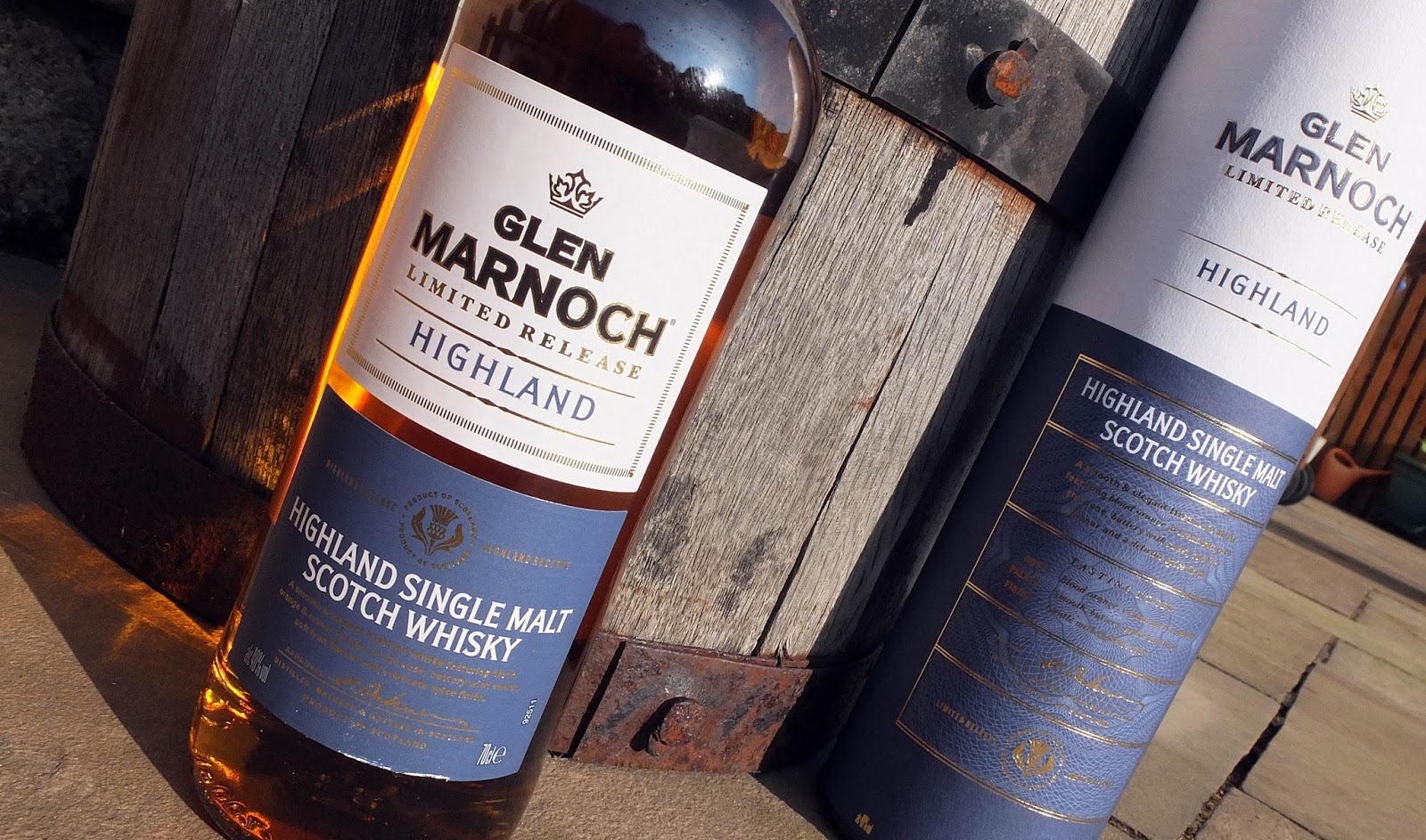 Whilst the distillery potentially responsible for this Aldi Glen Marnoch remains a secret there are only a handful of possibilities given the region. Aldi has been involved with Dalmore previously for some of its Glen Marnoch age statement releases as well as Fettercairn. There has been a push from whisky enthusiasts for more transparency about the contents of their whisky including distilleries, cask types and ratios. It’s unlikely this will change to the degree that some wish and for the record I never signed the petition, as I suspected it was more a marketing ploy from Compass Box. I feel slightly vindicated with the recent announcement of their Enlightenment blend despite a lovely label. For clarity, I’d like to see a standard set for the disclosure of artificial colouring in the UK, which clearly this Aldi release has to some degree.

Point is when we’re dealing in this area of the marketplace many shoppers don’t care about the packaging or a fancy marketing storyline or transparency. At this end of the market its all about pricing and bang for your buck; such details would be lost or ignored by the majority. Consumers will continue to purchase a certain type of whisky as its been the family favourite and offers that consistency without having to navigate a cluttered assortment of alternatives or complex information. They’ll continue to support that brand as always despite many being a pale shadow of their 1980’s and 1990’s equivalents.

Bottled at your standard 40% strength, its time for the all-important tasting notes and summary.

On the nose: a yeasty brown bread arrival before moving into honey and hazelnut cream. Almonds, stewed apples, cinnamon and vanilla pod with ginger, barley sweets and a subtle orange aroma heightened with the addition of water.

In the mouth: more orange emphasis and with water apricots appear. A refreshing quality and whilst nothing is pronounced I can pick out oat cakes with black pepper, a vanilla icing and some cherries and brown sugar in the background. Chocolate flakes and a touch of tobacco as seasoning combine to give us a drinkable single malt.

A solid nose with some sherry cask influence apparent and that’s a welcome addition to the mix. It remains fresh and playful with the palate not letting the standard slip. A well made single malt for a very attractive price – what’s not to like?