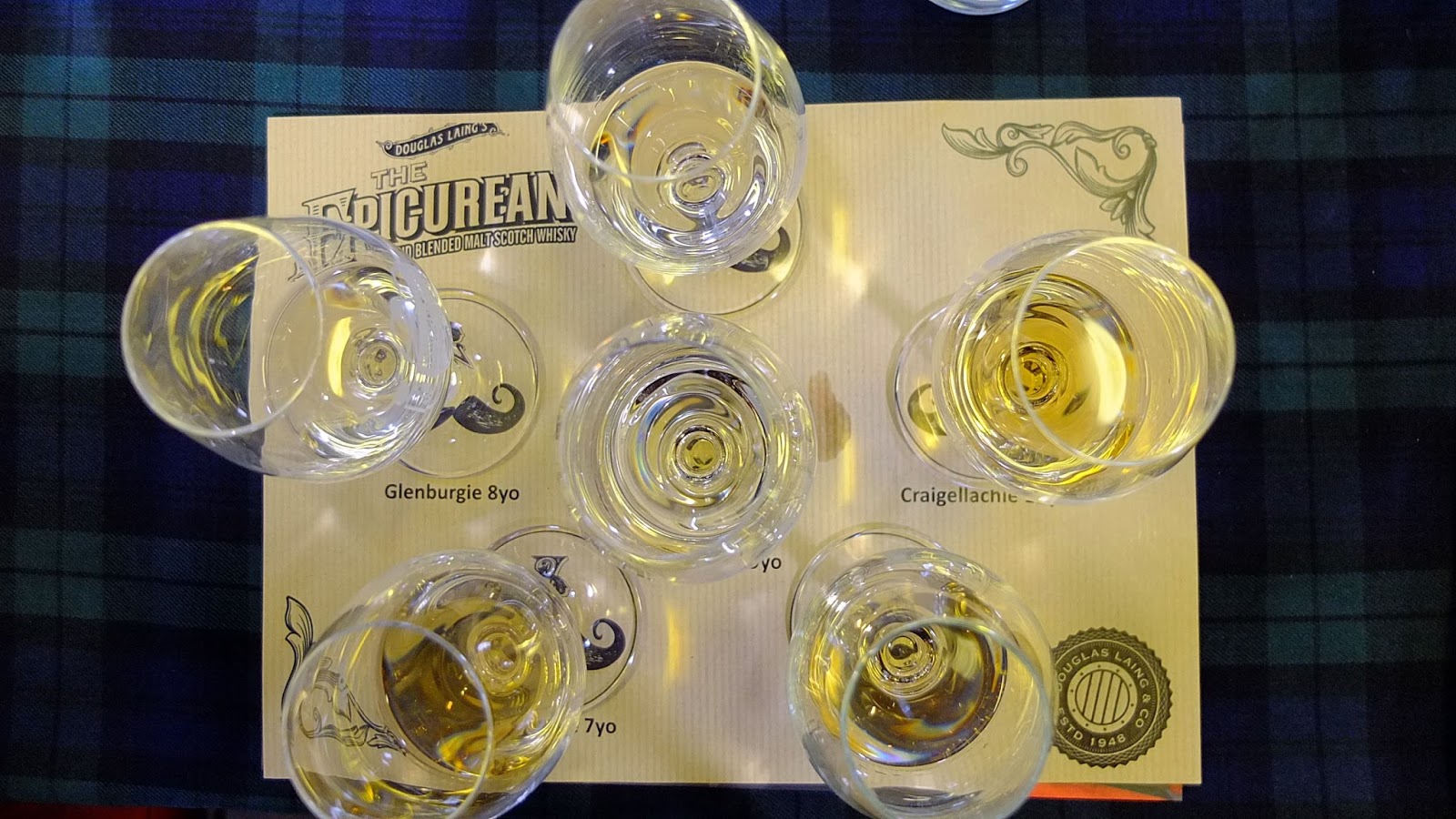 Following the Adelphi tasting, our doubleheader continued with a selection of Douglas Laing whiskies introduced by their global ambassador Jan Beckers. A set of whiskies lay before us as #thetormore4 settled into a new seating position in this bustling Dufftown venue.
Despite being held in the same hall, with an identical set up, this was a totally different whisky tasting experience. I had never considered the remarkable differences an alternate approach can produce. More often than not it’s the traditional brief introduction, before firing into the whiskies themselves. In retrospect, the Adelphi tasting was more along these familiar lines with a solid group of whiskies included, minimal information and a quick-fire approach.
Douglas Laing apart from their fine selection of single cask releases, bottle a range of brands including the Timorous Beastie, Scallywag, Big Peat and of course the new upstart in the guise of The Epicurean. As a company Douglas Laing are very brand conscious and rather than a whisky tasting it felt as if we were attending a marketing sales initiative. We had an outline of the history of the company and the various brands before we reached the first whisky. The prolonged introduction with a couple of ill-advised remarks had our group double checking whether we may miss our next engagement that evening.
What was conceived as a slick affair ran into technical difficulties with the wrong bottles being projected for our tasting and prompting some confusion. It was rather bewildering at times with widespread doubt concerning which dram number we were currently on and what the contents actually were. These technical aspects are often beyond the control of the ambassador it must be said.

On the odd occasion an almost empty bottle was thrust in front of you before being passed on. It was a very surreal experience and the sheer contrast in whisky tastings that afternoon prompted much debate. One offered the whiskies and little else, whilst the other was overloaded with branded marketing and a youthful selection of whiskies. I’ll leave you do decide which applies to what tasting. Ideally I think I’d prefer something pitched in-between both overall. 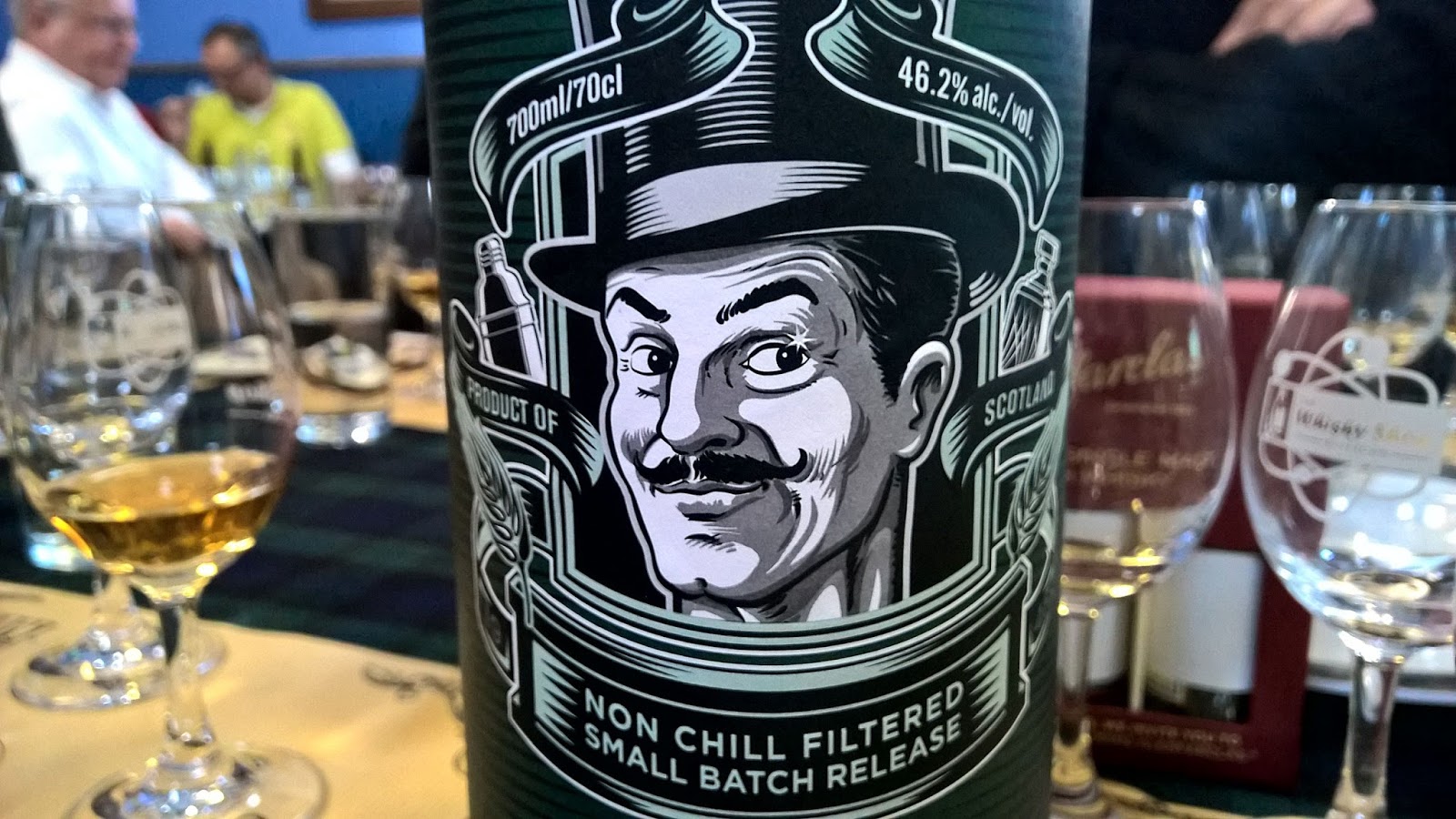 What I do recall very clearly is the initial whisky was the newly launched Epicurean. This was a surprise inclusion and I suspect was meant as a bonus. There is a rule amongst our group that what happens on #thetormore4 tour stays on tour. So I won’t repeat how this whisky was received by our well experienced, formidable and diverse contingent except for a comment that it’s so bland that it’s not fit for consumption – a crime against whisky, which sets a precedent as I’m about to sit down with it now.
As the nominated driver of our group, I stashed my samples (topped up by donations from others) to sit down with another time as I put together this article. Given the chaotic scenes at times, retreating to a controlled environment to write up these tasting notes is the only viable option. I’ve listed the drams alphabetically but in reality these were mainly from the Douglas Laing Provenance range. The actually order excluding Epicurean which was up first was Glenburgie, Speyburn, Craigellachie, Aultmore and finishing with Port Charlotte. Let’s start with this new brand that is based around a 1930’s cheeky chappy with a blend of some of the finest Lowland malts.
The Epicurean
natural colour, no chill filltratration, 46.2% ABV, RRP £37

Colour: here’s the reason why some do add natural colour as it looks like secretion
Nose: a clay-like aspect initially before apples and a little mint arise. Very fresh almost menthol in its cleanliness and some vanilla. Does this sound like a Jif advert? Botanicals in some respects, very light and very short-lived.
Taste: goddamn it burns. In the background just now on the vinyl deck is the Jon Spencer Blues Explosion playing Pant Leg – that’d be more pleasant in a glass. It’s really light, fresh once again and vanilla infused with some scorching black pepper. This is youthful, fiery and this gentleman should be shown the door for his ill-advised bravado or at least the sole of my boot up his ass.

Overall: apparently a blend of 2 distilleries, as its the Lowlands go figure. If you wondered why Lowland distilleries were a dying breed until the current whisky boom, then this would be definitive proof they deserved their fate. A really poor whisky and excessively overpriced for what it offers.

Perspective: I can appreciate that some whiskies divide opinion that’s part of the enjoyment of discovery. However the Epicurean is so off the mark that a positive review is difficult to digest. Its my forerunner for worst whisky of 2016 to date. If there are favourable summaries out there regarding the Epicurean then I’m tempted to question the transparency and independence of those involved. Douglas Laing arguably – as an onlooker – has formed strong links with writers that potentially has influenced their perspective and grip on reality. Given recent chatter on Twitter and my own thoughts on this generally, it’s a topic I’d like to come back to on a separate article on whisky transparency in reviews.

If you are thinking of purchasing this then I would urge you to ask for a taste initially and then decide for yourself. It’s not for me, but it might be what you have been looking for in a whisky. There are much better and cheaper whiskies from Douglas Laing than this cad as you can read from below.

Colour: ah your classic honey and lovely it is as well
Nose: interesting almost shy. It’ll need some coaxing. Certainly ginger loaf and a rum and raisin aspect. Remember those flying saucers with sherbet inside them? That’s what this is making thing of. Oh marzipan, almost a grain-like aspect to this with that and the vanilla with caramelised apples.
Taste: it’s pretty much all upfront here and in your face before leaving with a hint of black pepper and maple syrup. Before that sudden departure it’s honey glazed ribs and a mixed herb coating.

Overall: I like simple as that really. Would have been very interesting to follow the development of this over the next decade or so. A reasonably flavourful sherry cask whisky for under £40 and a thumbs up from me.

Colour: a vibrant caramel
Nose: mixed wine gums and red berries. Oh rum and raisin fudge a lovely combination. Crushed walnuts, dark chocolate shavings and toffee chews.
Taste: a very odd tasting one this. Lots of wood and a rather off-putting aftertaste that I’m trying to place. Bitterness to some degree. Plastercine or plasterboard? It’s a healthy sample so I’ll pour another… nah something isn’t right here mission control. Abort.

Overall: I didn’t see this bottle and with the technical slide problem, details are scant but it’s a real perplexing dram. Really engaging nose and well, all the character and effort has gone into the aroma, leaving an actual chassis that’s little more than framework.

Colour: very colour here a faint apple juice
Nose: chewing gum somewhat then allspice. Plenty of vanilla almost Bird’s Eye Custard actually. A light brown sugar, black pepper and why am I thinking scones and cream?
Taste: tasty not in a layered character type of way but just a couple of mellow core flavours that work well. A little cinnamon and lemon sprinkled on a freshly done pancake.

Overall: delightful and revitalising it’s an 8 year old you can appreciate and £33 it’s a winner all round. 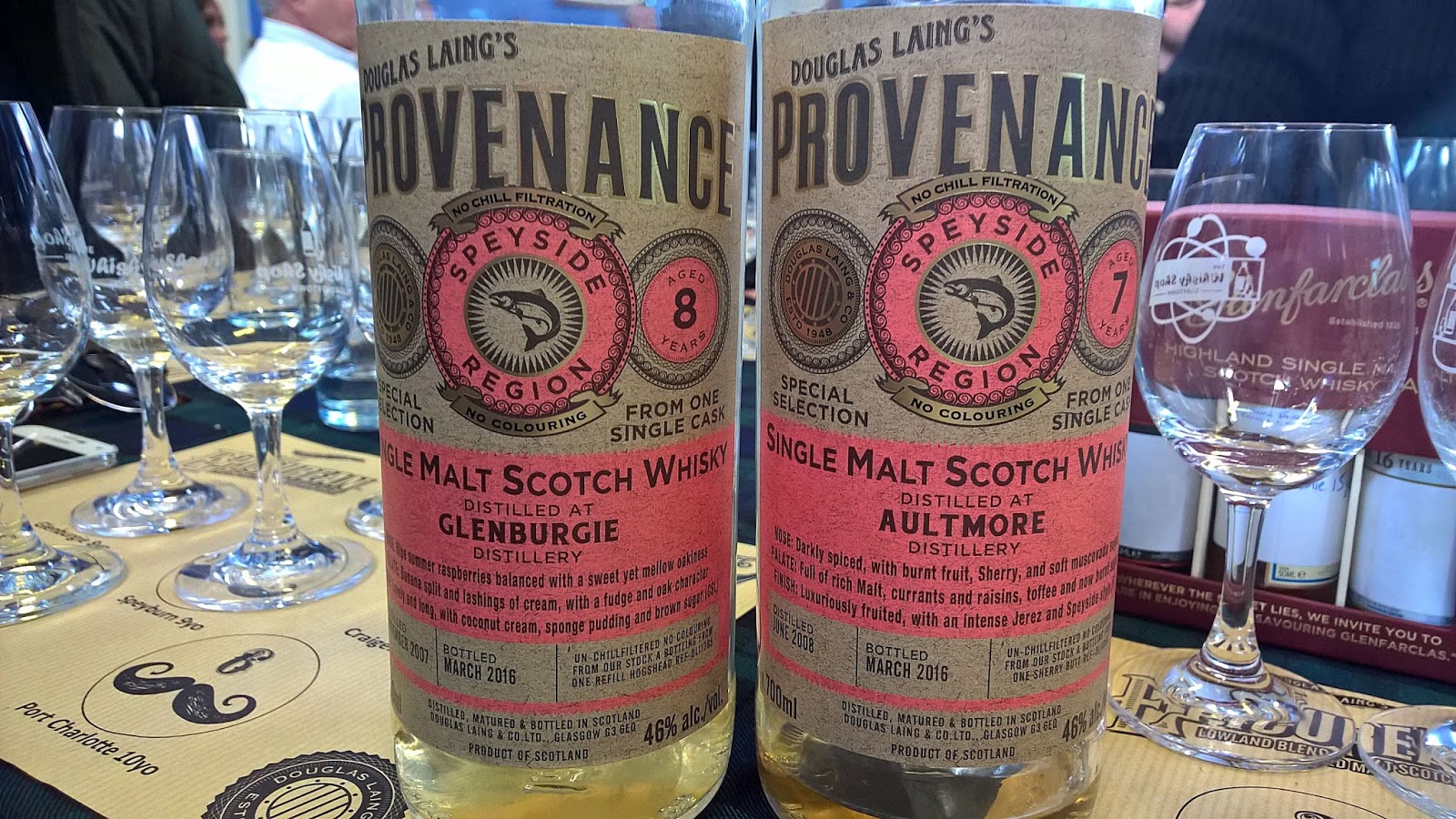 Port Charlotte 10 year old
natural colour, un-chillfiltered, 46% ABV
distilled October 2005, bottled February 2016, cask #11030 and 445 bottles
Colour: golden barley
Nose: my it is a toned down Port Charlotte. The peat here is subtle yet remains dense filling much of the dram. Hot dogs and brine with a little mushroom. Some treacle and golden syrup sweetness prevail. A well worn eraser head and some freshness with basil and eucalyptus.
Taste: a smoke box well at work here on the bbq shrouding the whisky leaving bacon fat, peppercorns and a little beef dripping? Almost Port Charlotte light after the recent SMWS 127.44 Cantina Mexicana 2016 Feis Ile release. A chargrilled aspect certainly but bottled at the wrong age or the wrong strength?
Overall: the last dram of the tasting being the smoky peated Islay offering. This one was the treat of the night in terms of retail price approaching £105 a bottle. Clearly not worth that at all and makes the aforementioned SMWS Feis Ile release even more justified at £120 after I deliberated the asking price on that review.
Speyburn 9 year old
natural colour, un-chillfiltered, 46% ABV
cask #11071, distilled March 2007 and bottled March 2016
Colour: builders sand
Nose: a bag of toffees and a pot of vanilla yoghurt. Some white chocolate and grilled pineapple rings.
Taste: very creamy and quite pleasant almost butterscotch. I’m thinking buttered toast as well, explaining the oily aspect. Meringues and vanilla pod with icing sugar.
Overall: again youthful and watered down to 46% so some aspects have been lost however this is a pleasant enough and solid whisky especially as you should be able to find it for around £35; more bang for your buck than the Epicurean.

Whilst this tasting lacked aged expressions it did show the staple variables of the Provenance range. There were lows yes, but a couple of bottles I would consider purchasing at the prices currently being asked. After this interesting experience our group headed to Glen Moray and their annual barbecue event.
CategoriesUncategorised

Whisky and the journey of discovery can be a daunting and ultimately, expensive business. Hence the arrival of a relatively new company on the scene,..

You may have heard of Craigellachie recently after a certain whisky award for its 31-year-old expression. Convenient timing for what was a struggling revamped..